WASHINGTON, DC – Admiral Mike Mullen has signed on to become a Special Advisor to the United States World War One Centennial Commission. 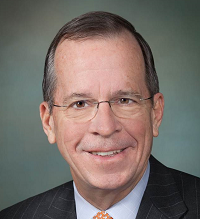 The Board of Special Advisors to the Commission provide expert advice in order to help the Commission carry out its goal of honoring and commemorating the 4.7 million Americans who served in World War One.

Admiral Mullen graduated from the US Naval Academy in 1968 and he served in the Navy until his retirement in 2011. Admiral Mullen served as the 17th Chairman of the Joint Chiefs of Staff. He acted as the principal military advisor to the Secretary of Defense, the Homeland Security Council, the National Security Council, and the President of the United States. Admiral Mullen also served as the 32nd Vice Chief of Naval Operations and as the 28th Chief of Naval Operations during his time with the US Navy.

The Executive Director for the Centennial Commission, Daniel Dayton, welcomed the new advisor. “Admiral Mike Mullen brings decades of world-class military leadership to our organization. We could not be more honored to have his help in reaching out to the American people, and telling the World War One story.”