"Remembering the friendship that evolved between the Doughboys and the population"

During the Spring 1917, a few weeks after the United States entered World War One, the American General Staff decided that the southern sector of the Loir-et-Cher Department would become a key element in its military strategy. An extensive infrastructure took shape under the American Service of Supply Command (camps, depots, communication lines, transport). Among the many localities that welcomed Uncle Sam's Doughboys, an outstanding example is the Cher Valley and in particular, the town of Gièvres. The U.S. Army Engineer Corps arrived in August 1917 and began construction of an immense supply camp, including a cold storage plant that supplied food for American forces dispatched from Dunkerque to Italy. The sector comprising Noyers-sur-Cher/Saint-Aignan was occupied by the 41st Division as a Replacement Camp. Its mission was to receive and maintain personnel, including classification, training, and assignment of soldiers to replace those wounded or killed in battle. 100 years later, the communities and associations located in the Cher Valley and in the Sologne are celebrating this historical episode by organizing a span of cultural activities. Valerie Chapeau, historian for the French region of Vallée du Cher et du Romorantinais, fills us in on what the region has planned.

The vallée du Cher et du Romorantinais played a key role in World War I for the American troop. Tell us about what happened there.

Quickly after the declaration of war, the American General Staff decided to make of the center of France, and particularly the south of the Loir-et-Cher department, an intermediate base between the landing ports (Saint-Nazaire, Brest) and the fighting areas. This rural territory, well connected by railroad lines, was the ideal place to maintain, train or cure soldiers. Moreover, General J. J. Pershing had made a policy to provide each soldier who landed in France 30 days of training & support. One ton of materiel also arrived for each of them.

To store and deliver this material in the good time, the Service of Supply chose Gièvres, a community located in the southern of the Loir-et-Cher department, to built an immense supply base capable of furnishing food, clothing, and technical, medical and communications equipment for an army of two million men. This depot was called the G.I.S.D (General Intermediate Supply Depot). Its construction began in august 1917. The hugest cold storage plant of the period, after those of Chicago, was also built in order to provide fresh food for American forces dispatched from Dunkerque to Italy.

In February 1918 the first center for airplane assembly was built in Gièvres and Pruniers-en-Sologne. The Air Service Production Center n°2, completed the two air service bases, settled near Tours and Issoudun, which formed and trained pilots. This center was quickly followed by a plant for automobile assembly, which reached a total of 20,000 vehicles by 1919. More than 80,000 American men served in these camps.

The south of the Loir-et-Cher department was also chosen to become the settlement of the 41st division. In the first days of January 1918, an immense camp made of tents and baracks settled in the meadows of the community of Noyers-sur-Cher. Other camps were built, during the following months in the communities of the whole Cher valley.


When it entered in the First World War The United States was not prepared for large-scale war. the regular army comprised only 121,000 soldiers, the National Guard 80,000 and the Marine Corps 13,000. The Americans had rifles but few machine guns or adequate artillery, and had virtually no mortars, grenades, semi-automatic assault weapons, tanks or airplanes. From April 1917, initially with French and British aid, a huge training program was begun to prepare for world war. 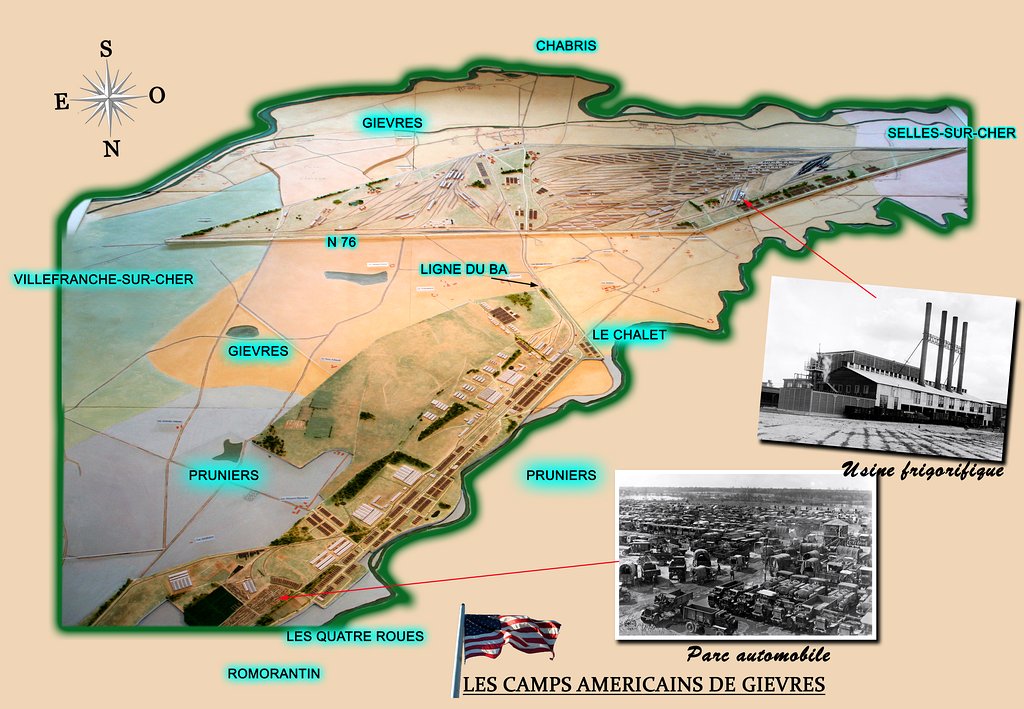 The 41st Division, also called the First Depot Division, was in charge to receive and maintain personnel, including classification, training, and assignment of soldiers to replace those wounded or killed in battle. All the Army corps were represented, from artillery to infantry, from elite Marine corps to cavalry, which was based in a former military relay station in Selles-sur-Cher. The methods of training of the 41st Division were excellent and it began the most important depot in the french territory. The other depots imitated its organisation methods and training program.

Our territory had also several military hospitals at Gièvres, Selles-sur-Cher, Noyers-sur-Cher and Pontlevoy. It is even said that a nurse based in the hospital of Noyers-sur-Cher created the insigna of the 41st division, also called The Sunset Division. 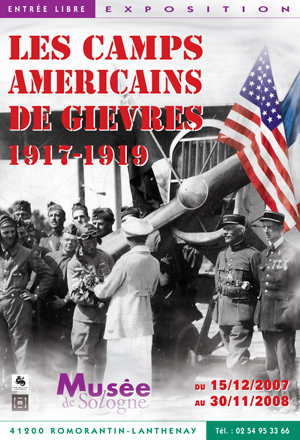 The president asked to the responsible of the « Pays d'art et d'histoire » to coordonate the commemorations (hamonize the schedules ; trying to propose a balance program on the whole territory of the Pays de la Vallée du Cher et du Romorantinais ; interface between the associations and communities and official organisms ; looking for financial supports) and to establish an efficient communication plan.

We're helped in our actions by the Assocation France-États-Unis and supported by the US Embassy in France. We also received in the beginning of november the distinction « Centenaire » from the Mission du Centenaire 14-18.

You have many activities planned for this coming year. Tell us about them.

Varied and numerous activities are planned in the south of the Loir-et-Cher department from March to December 2017:

World War One happened 100 years ago. In the United States, some people see it as a 'forgotten war'. Why is it important for us to remember the people and he events of World War One?

With the WW1, the United States and the world enter in the 20th century. After the war, the US become the most powerful country in the world and spread its supremacy on both economic, politic and military matters. 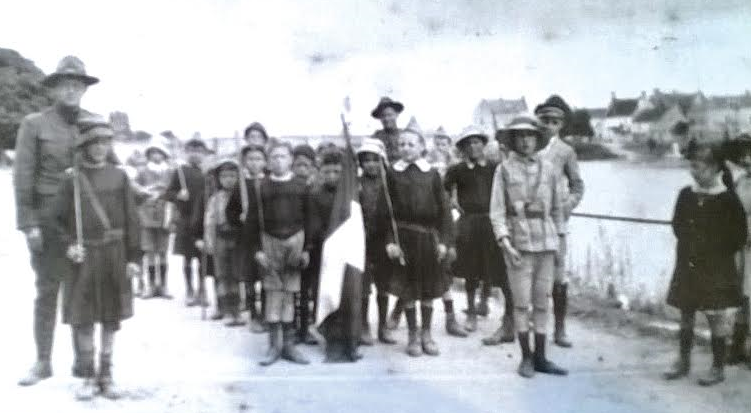 The end of the WW1, concluded in 1919 by the Versailles Treaty is an indirect cause of the WW2. Remembering WW1 gives some keys to understand why the Great War, also called « La Der des Der » by the harassed french soldiers, was followed only 20 years later by an even more killing conflict.

But for the south of the Loir-et-Cher department, remembering WW1 is also remembering the friendship that evolved between the Doughboys and the population of the region.

After initial observation of these American soldiers speaking a foreign language and having such a different, modern lifestyle, close ties with the local French population became the rule. After the war, many soldiers kept in touch with the families that had welcomed them. Marriages were celebrated, and children born.

We hope that these commemoration will strengthen the friendship between the people of the Loir-et-Cher department and the United States.

* The French Ministry of Culture and Communication attributes the name of « Villes d'art et d'histoire » or « Pays d'art et d'histoire » to local communities that promote their heritage. It guarantees the skills of guide-lecturers and promoters of heritage and the quality of their activities. From Prehistory to 21st century architecture, the cities and regions present their heritage in all its diversity. A network of 187 cities and regions is currently in existence throughout France. The Pays d'art et d'histoire de la Vallée du Cher et du Romorantinais is one of the latest regions to be so distinguished.