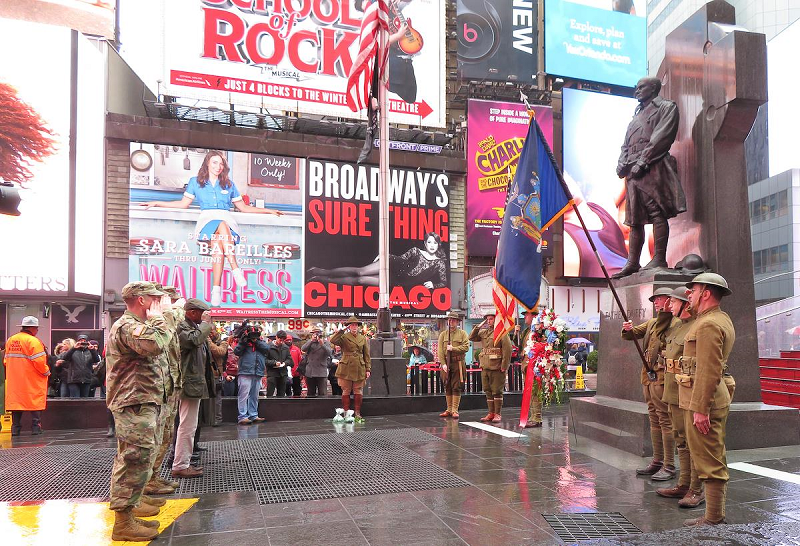 NEW YORK, NY – In crowded heart of New York City on Thursday April 6th, a group of uniformed World War I reenactors and active-duty Army soldiers gathered in Times Square, to mark the centennial of the U.S. entry into World War I.

The reenactor group was led by Kevin Fitzpatrick, a noted NYC historian, and member of the NYC World War I Centennial Committee. The group laid a wreath at the statue to honor the 4.7 million American men and women who served during the war, the 2 million who deployed overseas, and the 116,516 Americans who never made it home.

The Fighting 69th was in the thick of combat during World War I, with heavy human cost. Total casualties of the regiment amounted to 644 killed in action and 2,587 wounded (200 of whom would later die of their wounds) during 164 days of front-line combat. Sixty members earned the Distinguished Service Cross and three of its members were awarded the Medal of Honor.

The regiment's chaplain during World War I, Father Francis Duffy, became famous for his courage during combat, where he accompanied litter bearers into the thick of battle to recover wounded soldiers. For his actions in the war, Duffy was awarded the Distinguished Service Cross and the Distinguished Service Medal, the Conspicuous Service Cross (New York State), the Légion d'Honneur (France), and the Croix de Guerre. Father Duffy is the most highly decorated cleric in the history of the U.S. Army.