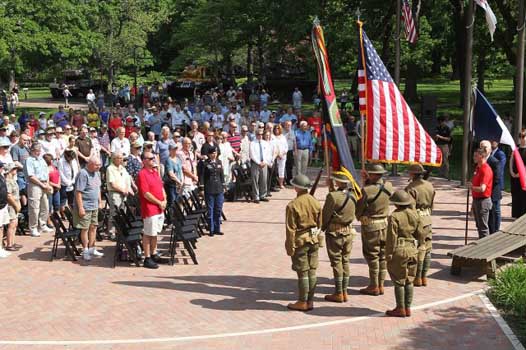 N.B. This is an overview of commemorative activities at cultural institutions throughout Illinois. This is a representative selection and is not intended as a comprehensive list.

The Work of the Illinois World War Centennial Committee


The impact of the war on daily life was expressed collectively in Illinois through civic monuments. Some monuments have been restored or have continually been maintained, like the monument at the Coles County Courthouse or the Howard Van Doren Shaw designed monument in Lake Forest. Other monuments have fallen into disrepair after a century. To help restore these monuments, Landmarks Illinois administers the WWI Monument Preservation Grant Program.  This program, which was launched in March 2017, and made possible with support from the Pritzker Military Foundation, provides funding to World War One outdoor monuments and memorials in Illinois in order to recover their dedication-era quality and appearance. The program has awarded $30,000 in grants to 5 Illinois communities. Monuments in Aurora, Des Plaines, Elkhart, Herrin, and Winnetka have all benefited from these grants.  (http://www.landmarks.org/preservation-programs/ww1-monument-survey/).

The Pritzker Museum and Library is extending memorial restoration efforts nationally. The World War I Centennial Commission and the Pritzker Military Museum and Library have jointly launched the 100 Cities/100 Memorials initiative.  In observance of the centennial of World War I, a total of 100 matching grants of up to $2,000 apiece will be awarded for the restoration of 100 World War I Memorials across the United States. The first 50 of these were announced on September 27, 2017 and the second 50 will come from round 2 of the matching grant challenge. (http://www.worldwar1centennial.org/index.php/100-cities-100-memorials-home.html).

Monuments without historical context are meaningless; many of the commemoration activities in Illinois have focused on education. For example, librarians have assembled a wide variety of online resources, such as the Readers’ Guide to World War One Resources published by Morris Library at Southern Illinois University at Carbondale (http://libguides.lib.siu.edu/c.php?g=778407&p=5580449).  Throughout Illinois, libraries have also published online exhibits that describe the experiences in their town or institution, such as the online exhibit of Glencoe Public Library (http://www.glencoehistory.org/exhibits/wwi-exhibit/) and the exhibit from Northwestern University (https://sites.northwestern.edu/ww1/).  Examining just one example from many, Moline Public Library celebrated the centennial with a series of programs featuring a lecture series, a wartime folk music concert, and re-enactors of wartime personalities.

Seeing re-enactors in period uniforms interacting with contemporary equipment and arms is a powerful educational tool and a priceless teaching opportunity. At the Illinois State Military Museum in Springfield, on November 2016, participants hosted a Great War Encampment, consisting of displays, mock skirmishes, and lectures.

In August, 2017, the Bud Billiken Parade in Chicago featured 370th and Buffalo Soldier re-enactors commemorating the African-American experience in the war.  Also in August, the Monticello Train Depot had a reenactment of deployment of soldiers bound for Camp Logan in Texas for basic training.

Midway Village in Rockford has featured a series of World War One re-enactments for a number of years. In April, they will again feature a two day event (http://www.midwayvillage.com/the-great-war-midway.html).

As the early war evolved into static trench warfare, soldiers on opposing sides would sometimes engage in spontaneous truces. The most famous truce started on Christmas Eve 1914, when German troops decorated the area around their trenches for Christmas near Ypres, Belgium. The Germans then celebrated by singing Christmas carols. The British responded by singing carols of their own. The two sides exchanged Christmas greetings and eventually exchanged small gifts in No Man’s Land.  Joint services were also held.

Midway Village in Rockford annually reenacts the Christmas Truce during the holiday season.

The 1916 Punitive Raid Into Mexico

The Pullman State Historic Site recognized employee and residents’ service during the Expedition as well as their involvement in the Preparedness Movement during a September, 2016 lecture, slide show, and concert at the Pullman Factory complex. In addition, on November, 2016, one of the lectures at the Great War Encampment at the Illinois State Military described the 1916 border campaign.

The main issue of the 1916 Presidential campaign was America’s involvement in the war. The Democrats, lead by incumbent Woodrow Wilson, campaigned on keeping neutral America out of the war. The Republicans, lead by their candidate, Charles Evans Hughes but particularly championed by former President Theodore Roosevelt, favored preparing and arming for war. The Preparedness Movement sponsored a number of parades throughout the summer of 1916, Chicago’s occurring in June, 1916. The Union League Club of Chicago, many of whose members were strongly in favor of Preparedness, had an extensive display and accompanying lecture about the movement in October, 2017. In addition, resident historian Mark DePue lectured about Wilson’s Presidential campaign and our entry into the war at the Abraham Lincoln Presidential Library and Museum in April, 2017.

The 33rd Infantry Division was the only distinctly Illinois Division that saw active service in France. Activated on July 1917 as a National Guard Division from Illinois, it began operations in France in May, 1918. Losses to the Division were high. After the end of hostilities, it returned to Illinois, and was deactivated on May, 1919 at Camp Grant in Rockford.

The Illinois State Archives has digitized their collection of maps used during World War I and brought back to Illinois by the 33rd Infantry Division of the Illinois National Guard. These maps are the only known maps to survive the war and provide a great insight into the situation faced by the 33rd during the war. (http://www.idaillinois.org/digital/collection/p16614coll33/search/).

The Illinois State Military Museum recognized the activation of the first troops (March 26, 1917) from the 33rd on March 25, 2017. There were a number of speakers as well as a concert by the Army Band.

The 8th Infantry Regiment (the 370th) and the African-American Experience

The 8th IR was founded in the 1870s as an all-black unit commanded entirely by black officers. At the outbreak of the war, it was re-designated the 370th Infantry Regiment. The segregated U.S. Army did not want to fight alongside African-American soldiers, so General Pershing attached them to the French Army. They fought with distinction, earning a number of battle commendations. After the war, some of the soldiers in the 370th and the 369th (the Harlem Hellfighters) chose to avoid widespread discrimination at home and remain in France. Legendarily, the musicians of these units brought jazz music to Europe. Chicago’s local PBS affiliate, WTTW, has produced a documentary on the 370th titled Fighting on Both Fronts (https://schedule.wttw.com/episodes/429186/Fighting-On-Both-Fronts-The-Story-of-the-370th/).

The 8th is the subject of an extensive exhibit at the DuSable Museum of African-American History entitled Clearing A Path For Democracy: Citizen Soldiers of the Illinois Fighting 8th  (http://www.dusablemuseum.org/exhibits/clearing-a-path-for-democracy-citizen-soldiers-of-the-eight-illinois-national-guard/).

A number of lectures about the African-American experience during and after the war have occurred. For instance, in February, 2017, the Orland Park Public Library presented The Great Migration and the Great War, and Illinois State University featured a lecture in May, 2017, We Return From Fighting and We Return Fighting.

Music of the First World War

At the turn of the 20th century, popular music in the form of sheet music, arranged for home parlor pianos, was a part of everyday life and was a common medium to experience collective events for new immigrants. When war broke out in Europe in 1914, music of the time began having war-related themes.

Professor William Brooks (University of Illinois at Urbana-Champaign) has created the award-winning presentation Johnnies, Tommies, and Sammies: Music and the World War I Alliance, chosen as the AMS/Library of Congress annual lecture. Brooks has given the presentation at numerous locations.

Andrew Schultze and Steve Munroe have created a cabaret of wartime music, The War to End All Wars. Finally, the Chicago Symphony Orchestra has commissioned a commemoration work to be performed. Created by renowned composer Bruno Mantovani, Threnos will be performed from October 18-20, 2018. The Orchestra will also perform Verdi’s Requiem in honor of the Armistice and Centennial from November 8-10, 2018.

The Service of Nurses

Once America entered the war, two of the very first American service deaths occurred during a training accident aboard the U.S.S. Mongolia. Nurses Edith Ayres and Helen Wood were killed on May 20, 1917 en route to France. The ship’s crew fired the deck guns during a practice drill, and one of the guns exploded, spewing shell fragments across the deck and killing Nurse Ayres and her friend Nurse Helen Wood.

On May 20, 2017, members of Northwestern University Libraries and midshipmen and officers from Northwestern’s Naval ROTC unit assembled at Chicago’s Rosehill Cemetery by Wood’s grave for a formal presentation of the colors, remarks, and a bugler playing the National Anthem and Taps.

Illinois State University has the online project of its wartime students and faculty, A University Goes to War, World War I Women (http://www.idaillinois.org/digital/collection/isu/search/). Many of the women depicted served as nurses or as medical staff overseas.

There have been a number of lectures and presentations on the pandemic. Tina Beaird has given her lecture on the flu numerous times to cultural institutions, such as the one she gave at the Illinois History Symposium in 2017. In June, 2018, Kenneth Davis will present a lecture about the pandemic at the Pritzker Military Museum and Library.

The Chicago Race Riot and the Red Summer of 1919

From May to October, 1919, there were a series of deadly race riots in cities and towns throughout the United States. The most famous one—and the deadliest—occurred in Chicago. On July 27, 1919, Eugene Williams, a young African-American boy, swam over an imaginary line separating two segregated beaches. Williams was stoned by white children on the beach when he succumbed to his injuries and drowned. The resulting 13 days of rioting caused 38 fatalities and only ended with federal intervention.

The Chicago History Museum and the Newberry Library have applied for a National Endowment for the Humanities grant to explore the history of the 1919 Race Riot.

A number of civil rights activists fought against the draconian Sedition and Espionage Acts of 1918 and the wartime loss of civil liberties. One of the most famous was Eugene Debs. Debs frequently spoke out against the Wilson administration and the war. On June 16, 1918, Debs made a speech in Canton, Ohio, urging resistance to the military draft of World War I. He was arrested on June 30 and charged with ten counts of sedition. He was ultimately sentenced to 10 years in prison.  In April, 2017, noted Professor Ernest Freeberg lectured extensively on Debs, speaking at the Illinois State History Symposium, Northern Illinois University, and the McHenry County Historical Society.