On April 6, 2017, across the state, Californians remembered the U.S. entry into World War 1 with three significant events. Two were held in Southern California, and one in the northern half of the state. 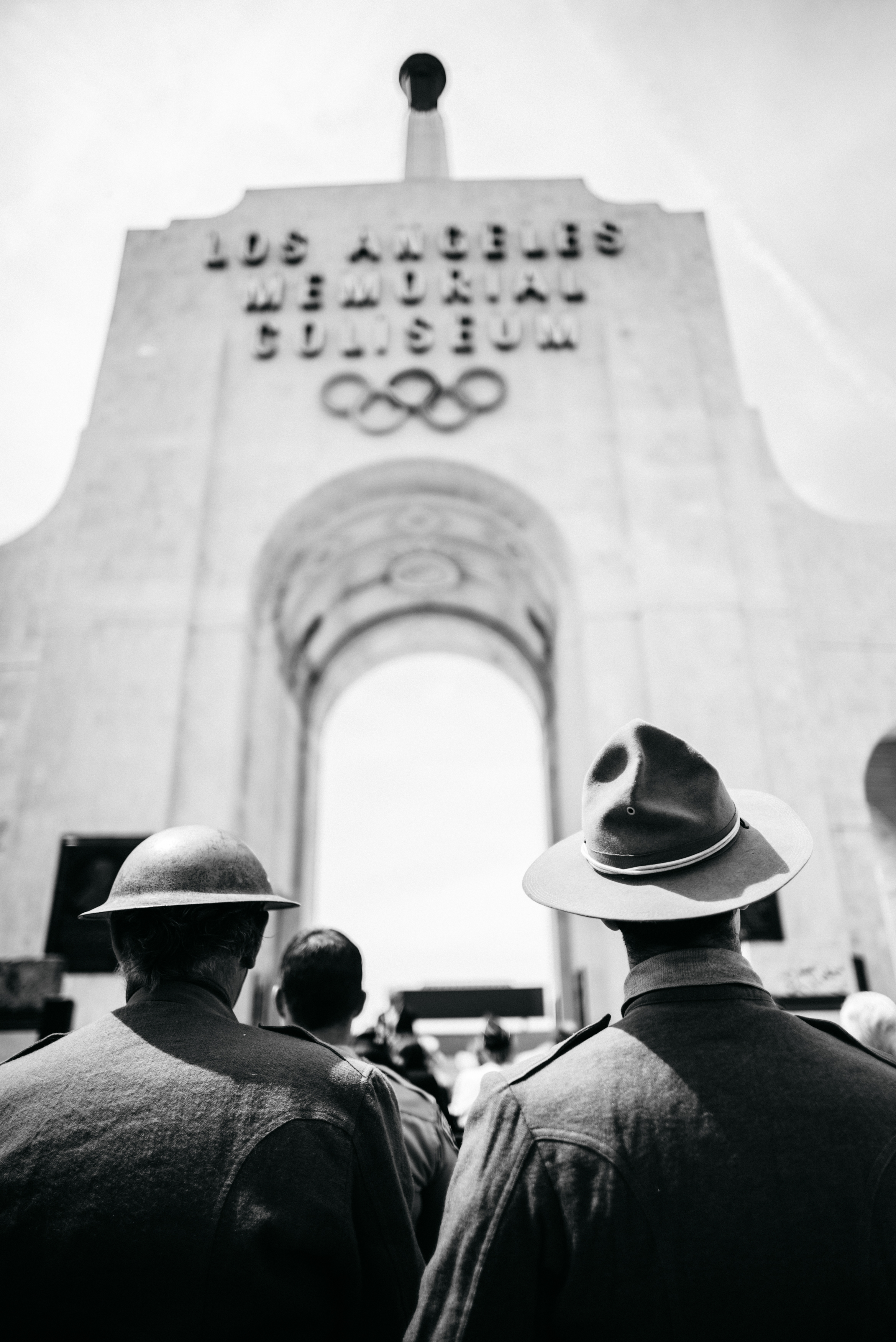 At what is surely California's largest WW1 memorial, the Los Angeles Memorial Coliseum, dignitaries, celebrities, re-enactors, and the common patriot attended a well-prepared commemoration that included a formal color guard, speakers, poetic readings, and dramatizations. The event, organized by Courtland Jindra, one of the California World War One Centennial Task Force Co-Directors, and the Memorial Coliseum, was a superb example of preparation. 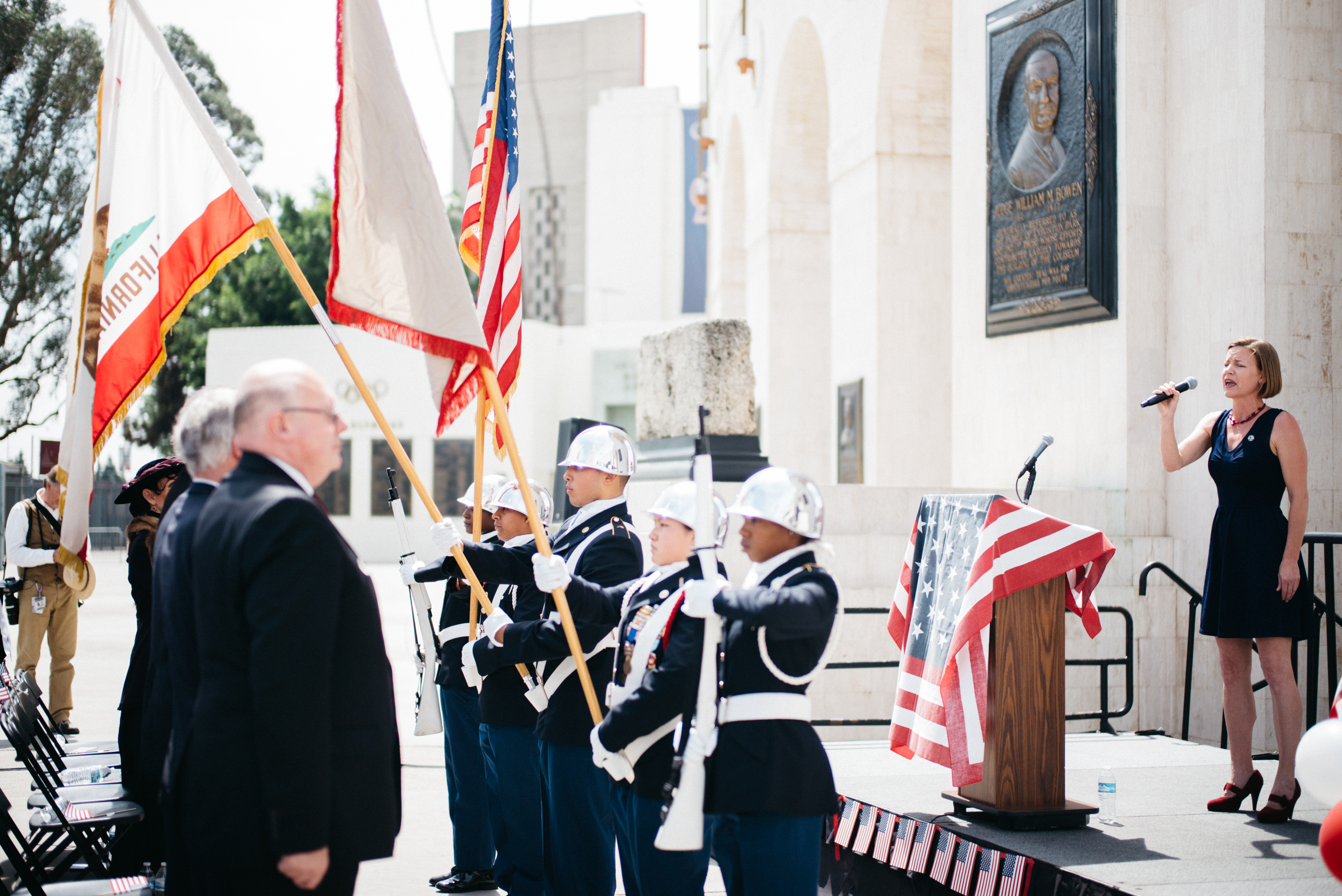 Los Angeles High School JROTC honor guard present the colors as singer/songwriter Annie Boxell sings our National AnthemAfter the Los Angeles High School JROTC honor guard presented the national colors kicking off the program at 1:00 P.M., speakers that included veteran actors and producers addressed those in attendance with selections from 100-year-old articles from the LA Times, a selection from the infamous Zimmerman Telegram, and readings from actual letters written a century ago from California Doughboys in active service. A special surprise, in the personage of a re-enactor, was the appearance of First Lady “Edith Wilson” who spoke to the crowd on behalf of her husband Woodrow Wilson. 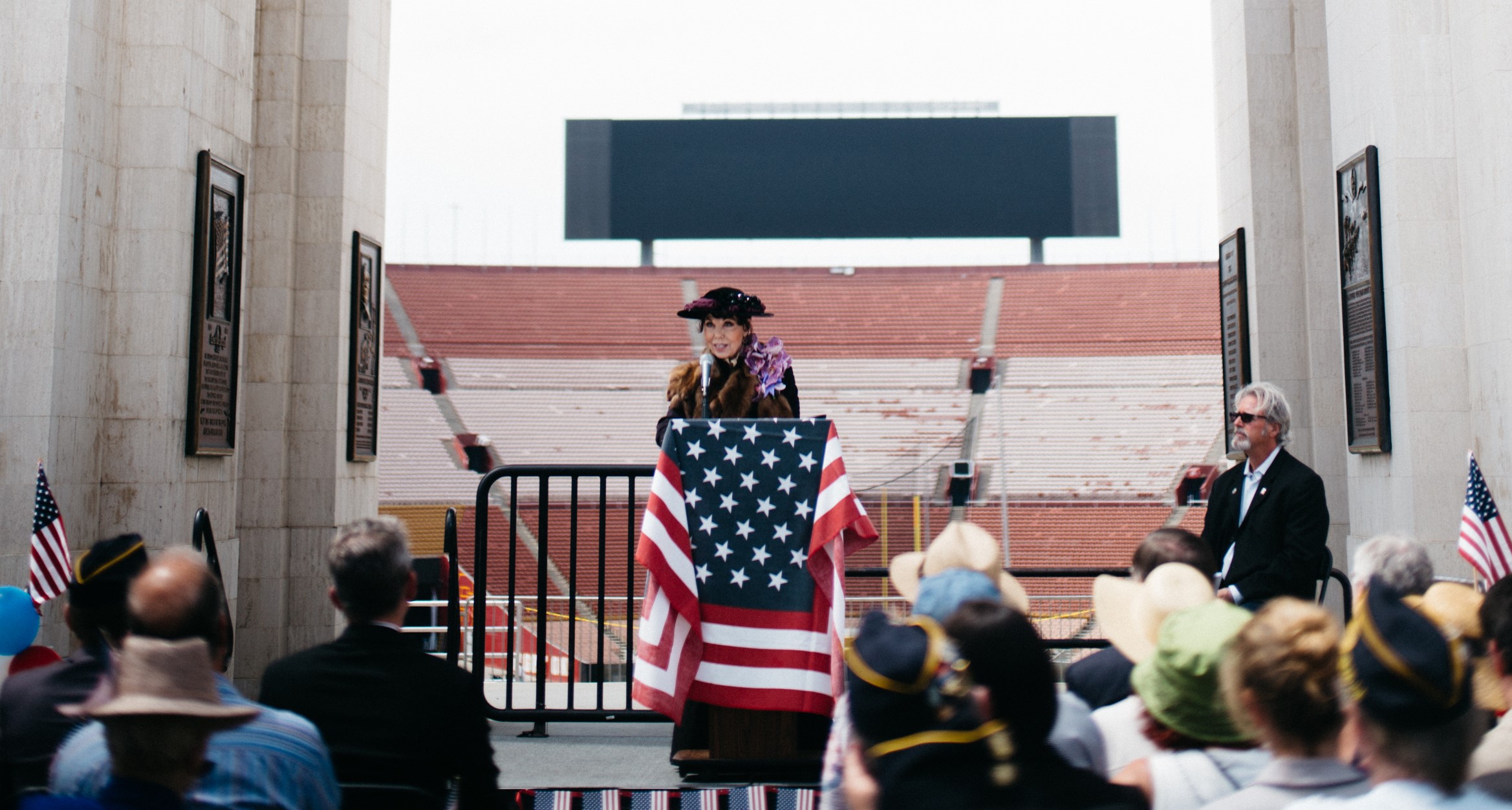 Another special opportunity for those in attendance was the unique sign of conciliation when Henri Vantieghem, the Consul General of Belgium, and Hans Jörg Neumann, Consul General of Germany shook hands and together laid the commemoration wreath at the coliseum's permanent bronze plaque to those who served in WW1. 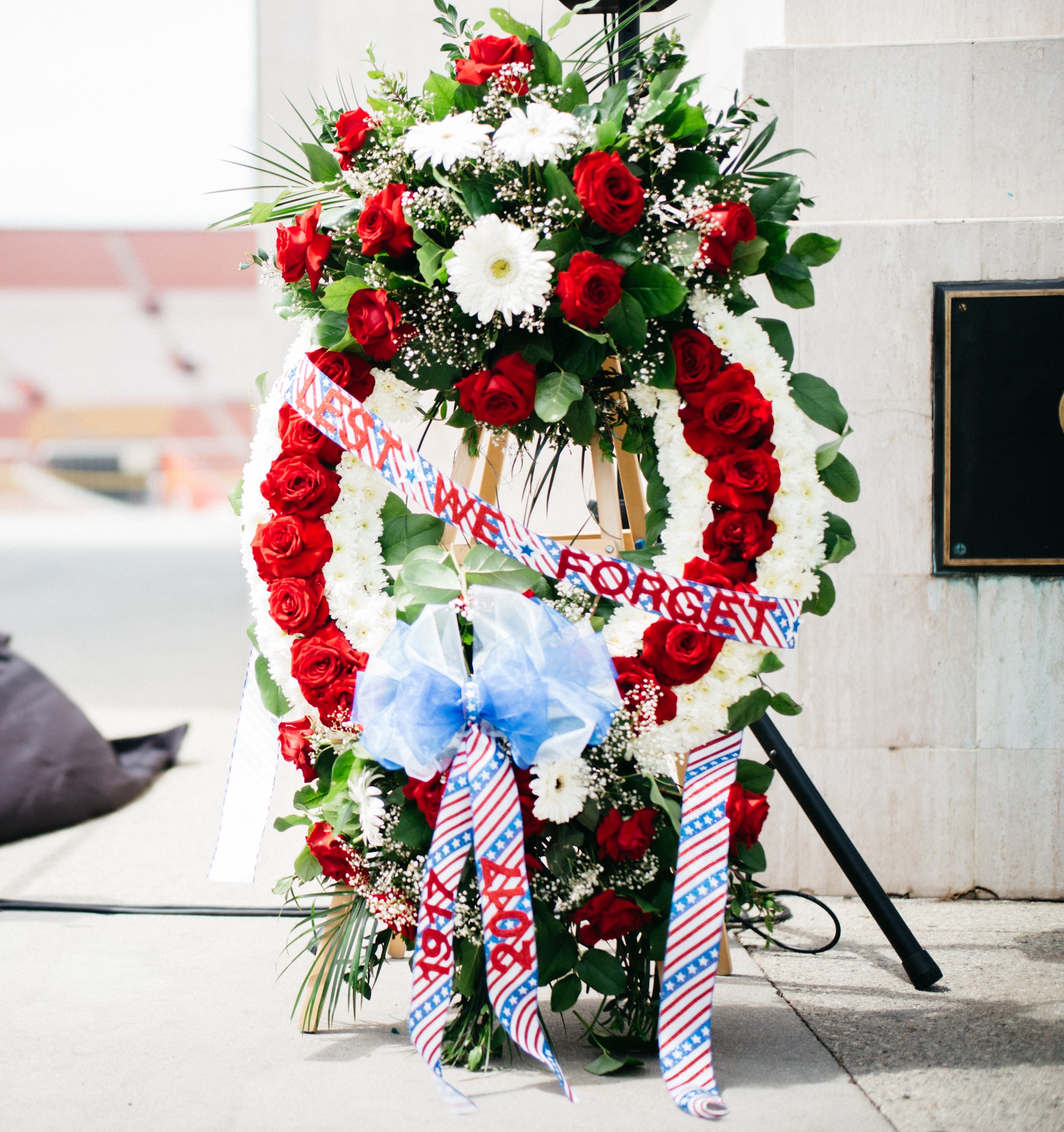 It was in 1914 that Germany drove through Belgium and on into France. That offensive instantly put the two nations at war, but now, 100 year later, the two representatives of their respective embassies stood side-by-side to honor those Americans who fought so bravely. Mr. Tom Ruck, Director of the Los Angeles National Cemetery, assisted the the two foreign dignitaries in placing the wreath at the coliseum's 50th Anniversary Commemoration plaque. Since all of the Americans who served in WW1 are gone, and as official caretaker of the resting place of so many U.S. WW1 soldiers and sailors, it was fitting that Mr. Ruck represent all of the Americans who served. 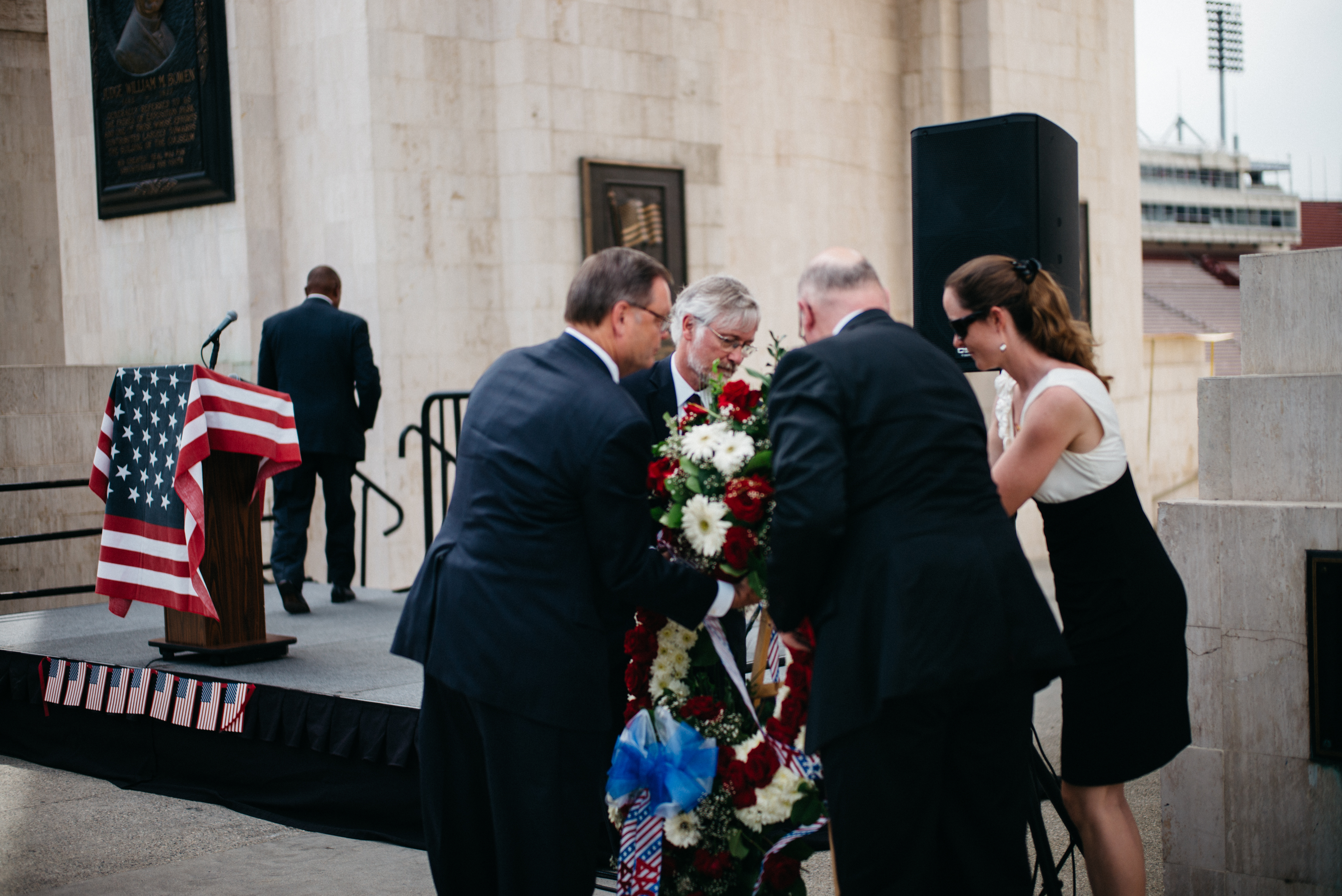 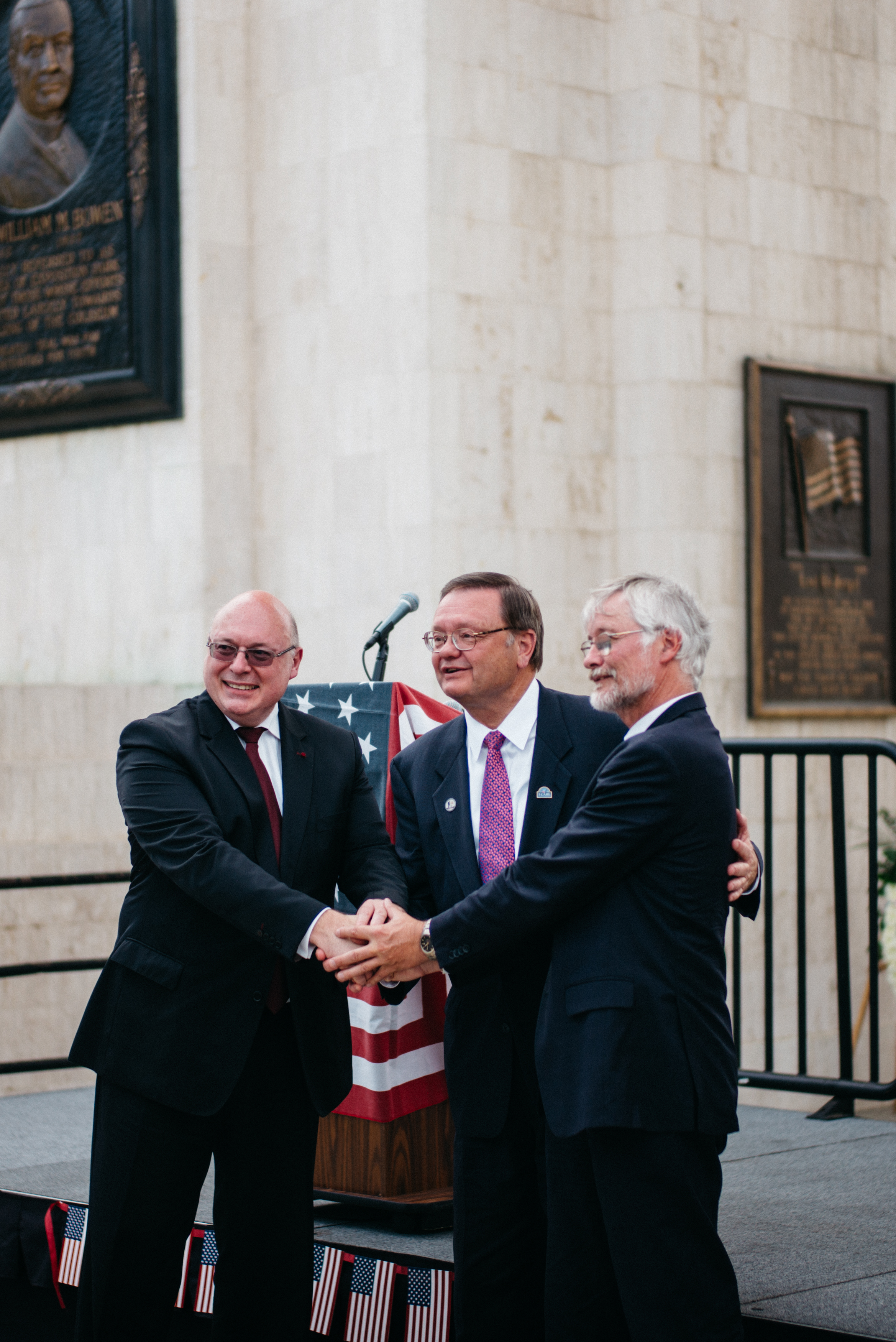 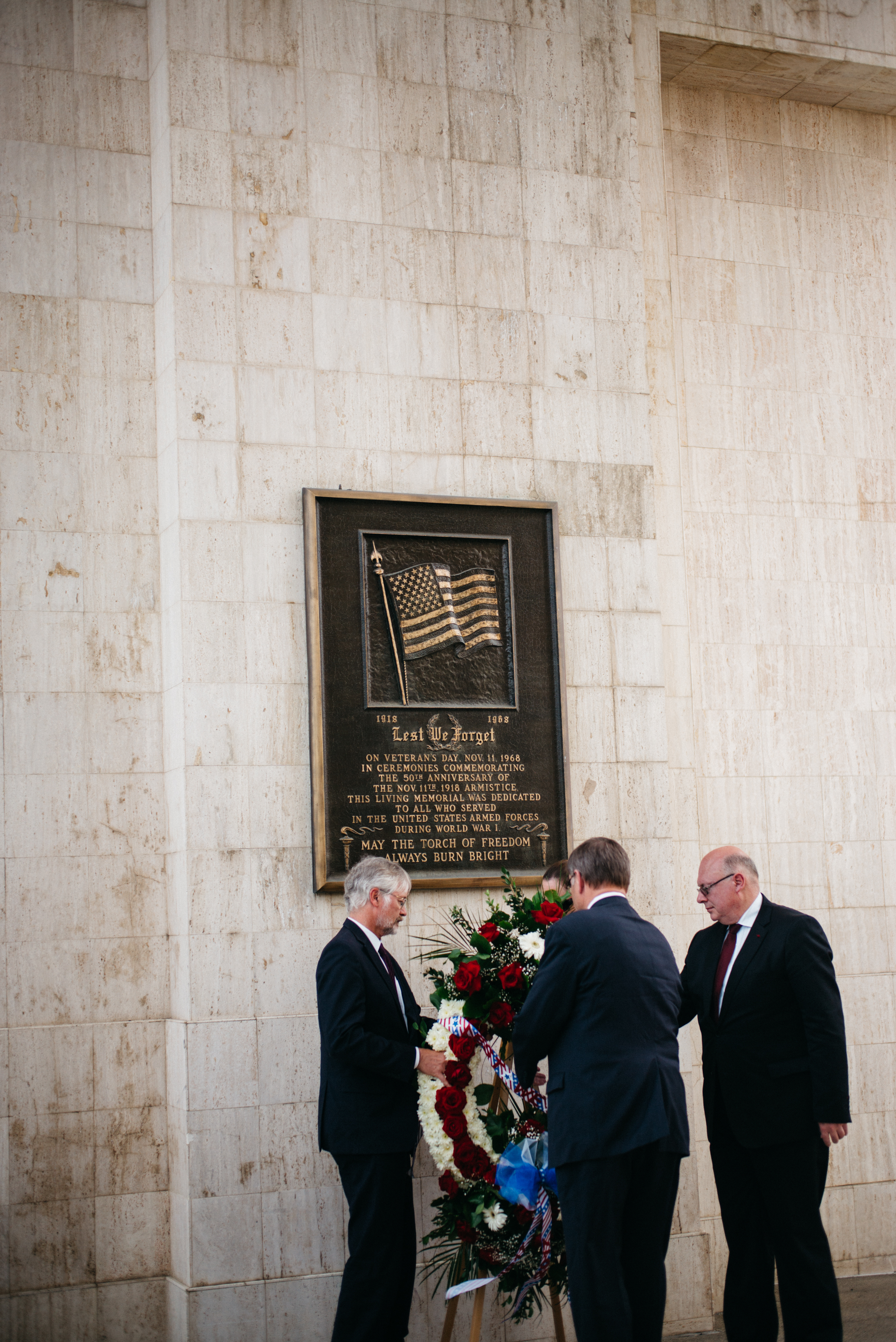 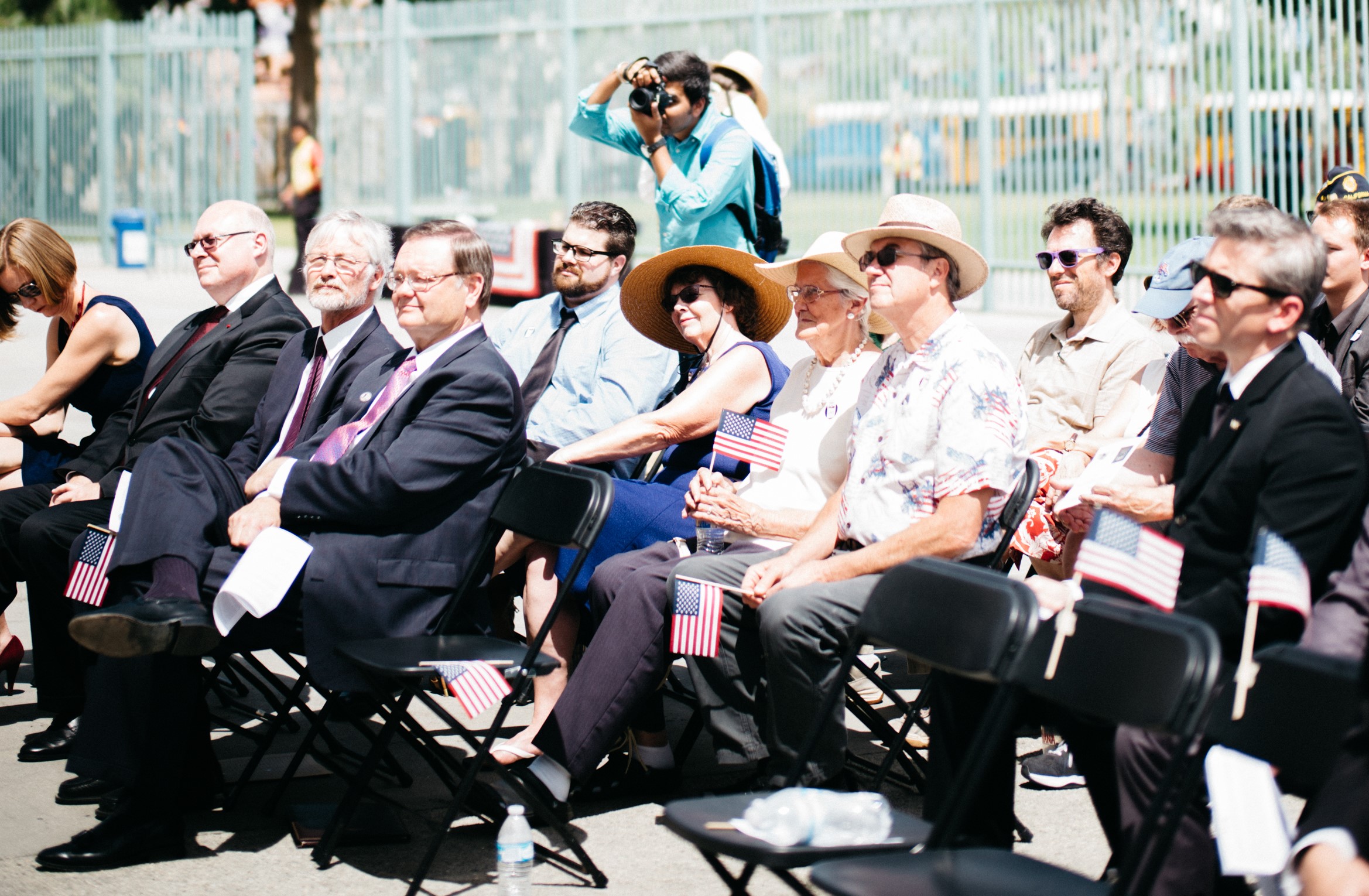 Foreign & Local Dignitaries at Memorial Coliseum April 6th WW1 CommemorationThe Coliseum served as a fitting site, as it was originally constructed as a World War I memorial and rededicated in 1968 to all 4.7 million Americans who served in the war.

California World War I Centennial Task Force co-director and amateur historian Courtland Jindra said, “I wanted desperately to hold the event at the Coliseum,” Jindra constructed the script, setting, and speakers to transport the audience back in time to 100 years ago by creating a narrative of events starting in 1914 and ending with the U.S. Congress declaration of war in 1917.

Present in the audience were veterans, community leaders, historians, and many who came just to honor and remember those who served. In particular were members of Post 43 and Squadron 43 of the Hollywood 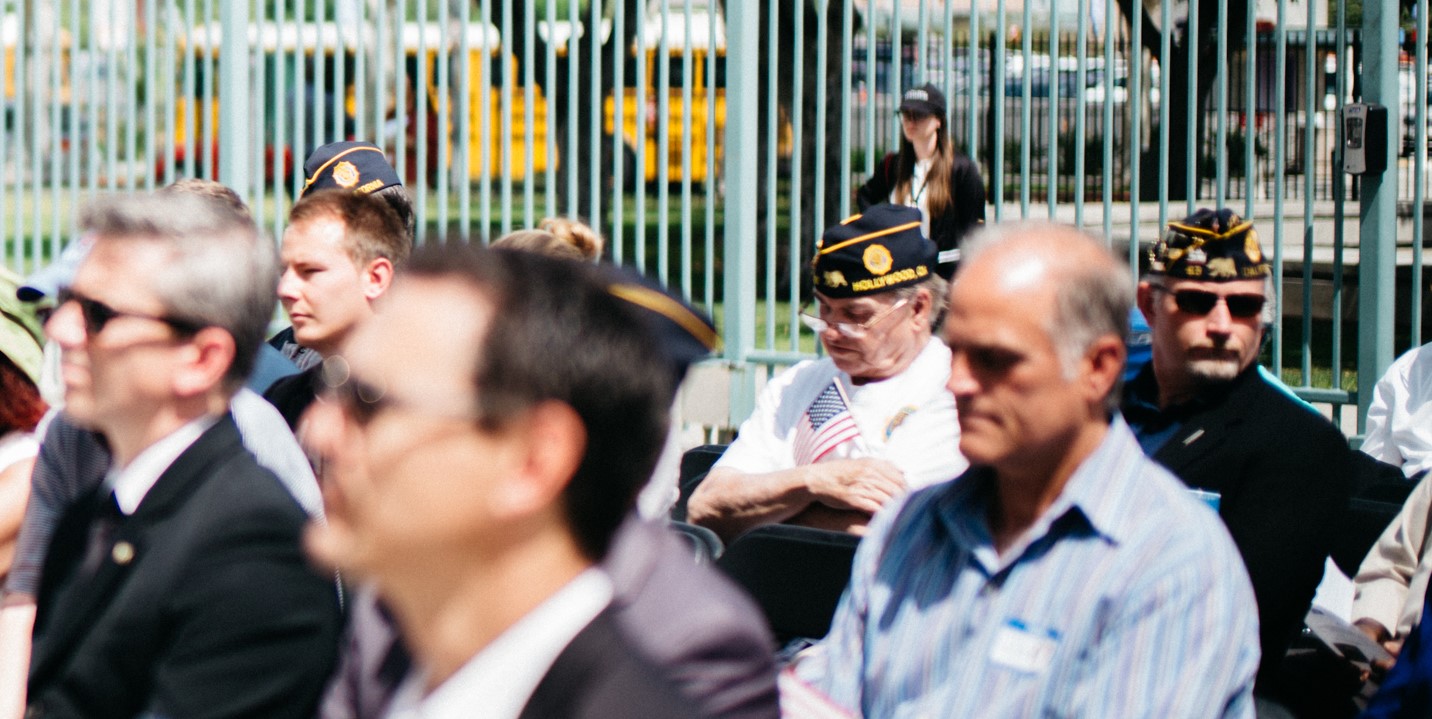 Read more about it at: http://dailytrojan.com/2017/04/06/veterans-speak-coliseum-wwi-event/ 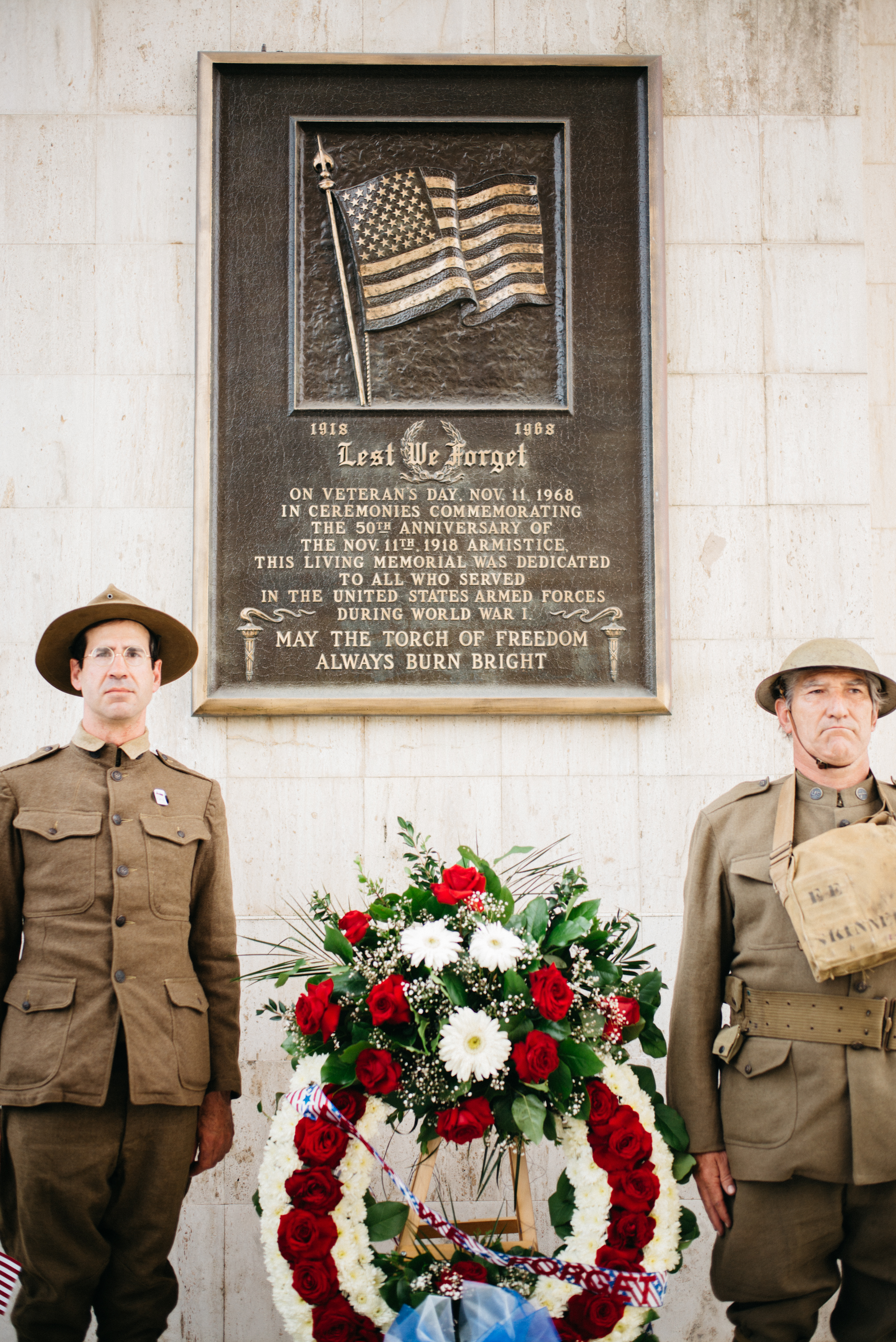