In Sacrifice for Liberty and Peace: Centennial Commemoration of the U.S. Entry into World War I 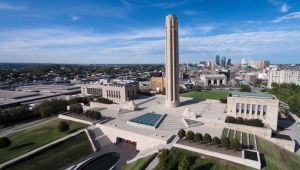