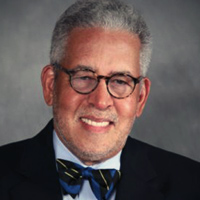 Harry G. Robinson, III is Dean Emeritus of the School of Architecture at Howard University. Educated in architecture, city planning and urban design, he is currently the principal of TRGConsultingGlobal and the executive consulting architect for the American Battle Monuments Commission. Mr. Robinson’s leadership career in the design disciplines spans practice, teaching, design management and research. For nearly twenty years, Mr. Robinson served as Dean and Professor of Urban Design, School of Architecture and Planning, Howard University. Following this service, he became Vice President for University Administration.

Mr. Robinson was a presidentially appointed commissioner and elected chairman and vice chairman of the United States Commission of Fine Arts. Since 1998, he has served on the historical advisory board of “Washington, DC: America’s City,” a four-part film series of one hour programs to be broadcast nationally. He was a member of the Committee for the Preservation of the White House and a director of the White House Historical Association. Mr. Robinson also serves on the National Research Council’s Committee of High Performance Sustainable Federal Buildings.

Mr. Robinson has received numerous awards in recognition of his professional and civic achievements. Specific to Washington DC, he was awarded the Centennial Medal in 2003 by the Washington Chapter of the AIA and the Architect of the Year award by the DC Council of Engineering and Architecture Societies. Mr. Robinson was inducted into the Washington, DC Hall of Fame in spring 2006.