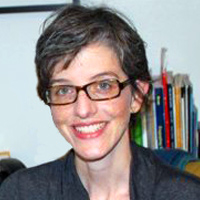 Jennifer Wingate is Associate Professor of Fine Arts at St. Francis College in Brooklyn, New York, where she teaches art history and American studies courses, including Commemorative Practices in the United States, Civil War Past and Present, and the Art of Social Change.

Ms. Wingate held a Smithsonian American Art Museum postdoctoral research fellowship in 2003-2004 that culminated in the publication of the article, “Over the Top: The Doughboy in World War I Memorials and Visual Culture,” in the journal American Art (2005). Her other publications on World War I memorial sculpture include “Memorials, Motherhood, and Anti-Militarism: Bashka Paeff’s Sacrifices of War,” for Woman’s Art Journal (2008) and “Real Art, War Art, and the Politics of Peace Memorials in the United States after World War I,” in an issue of Public Art Dialogue (2012). Ms. Wingate’s book, Sculpting Doughboys: Memory, Gender, and Taste in America’s World War I Memorials, was published by Ashgate in 2013.

Since February 2015, Ms. Wingate has served as co-chair of Public Art Dialogue, an affiliated society of the College Art Association. She enjoys teaching in Brooklyn, where she brings classes to public art around New York City, as well as to museums, galleries, and archives. Her new research focuses on representations of the domestic display of Franklin Delano Roosevelt portraits in the work of Gordon Parks, Lewis Hine, Jack Delano, and other artists, photographers, and filmmakers of the 1930s and 40s.