For use when visiting the WWI Memorial in D.C.

The WWI Memorial Visitor Guide can be an integral part of your experience when you visit the new WWI Memorial in Washington, D.C. 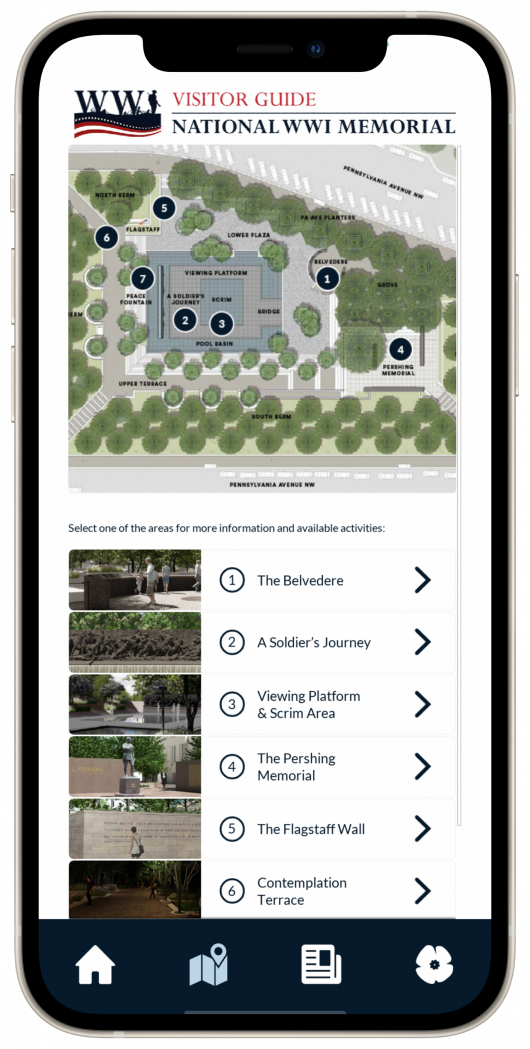 The app provides an overview of the memorial and the various area.

Not only does it provide insight into the Memorial and its history, but it also provides a plethora of information about WWI in an unique and interesting way by using Augmented Reality

Each area has AR features that allow you to place objects, information, videos and more onto the grounds and surfaces of the memorial.

Timeline Tower
For example, in the Belvedere area, you can drop a giant timeline tower onto the ground that tells the story of WWI from 1914 through 1919 with over 50 narrated information panels.

There is a video you can play that tells you the story that is portrayed by the sculpture currently being created by Sculptor Sabin Howard. The 58' deep bas-relief sculpture will be the largest in the western hemisphere when it is completed and installed in 2024. Until it is installed a changing series of visuals will be put on the wall where it will be installed portraying the evolving completion of the work from initial sketch, to clay, to finished bronze.

The Vehicles of WWI
While you are on the Viewing Platform, with the giant reflecting pool, we allow you to place WWI era ambulances, motorcycles, planes, tanks, and ships out over the pool and when practical, we make them actual size to give a sense of what these craft were like.

How WWI Changed America
At the North Lower Terrace at President Wilson's quote, you can place an augmented reality viewer on the wall and select from over 50 short videos covering all the social aspects of WWI and how the War that Changed the World completely transformed every aspect of American life.

Virtual Remembrances
And finally, and perhaps most important, on the upper terrace by the Peace Fountain is where you can use the Visitor Guide App to explore the hundreds of Stories of Service that have been submitted to us by the public over the centennial period. Everyone is invited to contribute to this archive that lets you submit your ancestor's story of service in WWI, whether military or civilian. All these stories will be accessible in both the WWI Memorial Apps, the "Visitor Guide" for those at the Memorial in D.C. AND the "Virtual Explorer" that bring the entire memorial to everyone, anywhere whether at home or in the classroom.

WWI Memorial Explorer
"Virtual Explorer"
For Use At Home or school
When you are at home or in a classroom, the WWI Memorial VIRTUAL EXPLORER bring the entire memorial to your living room, classroom, backyard or driveway.
A unique way to experience the story of WWI and the New National WWI Memorial in Washington, D.C. using the exciting technology of Augmented Reality on your Smartphone or Tablet for Android and iPhone.
memorial render
Screens w memorial render
Slide 3
in hand
lusitania
lusitania

For use at home or in school

The Doughboy Foundation is proud to offer you WWI Memorial "Virtual Explorer" App in cooperation with the United States World War One Centennial Commission.

The App provides an ability to explore the past using the tools of the future.

Developed under an education grant from Walmart, the mobile device App places a scaled version of the entire 1.8-acre WWI Memorial anywhere including backyards, driveways, living rooms, and more.

The virtual Memorial is filled with WWI explorations and discoveries including video game style 3D stories and over 50 videos integrated into the 3D space. Together they present various aspects of WWI, “The War that Changed the World”.

Although WWI is not a major focus in American education today, the War had a deep and lasting impact on nearly every aspect of American society and culture.

America’s military experience of WWI is also explored from a variety of angles. This was arguably the single most transformative period in American and global Military history, ushering in the modern era of warfare with its machinery of mass destruction and previously unimagined devastating forces.

The Memorial, and by reflection the App, are both dedicated to recognizing that WWI was a deeply traumatic human experience. It was a historical event that affected every household and person in the nation… A story powerfully told by the WWI Memorial’s central feature, a 58’ long, 38 figure bronze sculpture called “A Soldier’s Journey,” created by classicist sculptor Sabin Howard.

To remember the individuals who served, the App provides the ability for families and organizations to submit a “Virtual Remembrance” of WWI veterans, along with anyone who served in WWI including nurses, ambulance drivers, Red Cross volunteers, local heroes and even companies that stepped up. The only requirement is that the story of service needs to be WWI driven.

These Virtual Remembrances are submitted via a web page accessed through the App, curated and then manifest in the Memorial App. The story of service that is submitted, is turned into speech and text which can be listened to or read.

The "Virtual Explorer" also allows users to drop-in on the site with a camera view that has been updating since early construction. They can see the most current still, watch a time lapse video of the construction, or select any date and time of day in the past to explore a high resolution image of the construction activity at that time, up though realtime views of the open Memorial.

“This WWI Memorial comes to our Nation’s capital 100 years after WWI transformed our country in unimagined ways. 4.7 million Americans put on the uniform and we mobilized a force of 2 million from a standing army of less than 130,000 - all in just 18 short months. The War that Changed the World was transformational for the nation and for the world. This new ability to see it ‘in person’ is truly remarkable”.
Dan Dayton the Executive Director for the U.S. World War One Centennial Commission.

The WWI Memorial Virtual Explorer App is available both from the Google Play and the App Store. There are no costs and no in-game purchases required. It is suitable for any age above 12 years-old with some depictions of battles and wounded soldiers.