The Timothy Ahearn Memorial in New Haven, Connecticut - Part I

Laura A. Macaluso participated in a 100 Cities / 100 Memorials webinar about the best practices for conservation of WWI memorials.
uring her participation, she was so articulate and informed on the subject, I asked if she would please contribute some blog posts to our endeavor.

We are all fortunate that she agreed. Laura has put together an wonderful three part series of blog posts profiling a Doughboy Memorial project in Connecticut. We invite you to read, learn and comment. Most of all we want to thank Laura. Her knowledge and insight is formidable. Here is PART 1.

The Timothy Ahearn Memorial in New Haven - Part 1
By Laura A. Macaluso 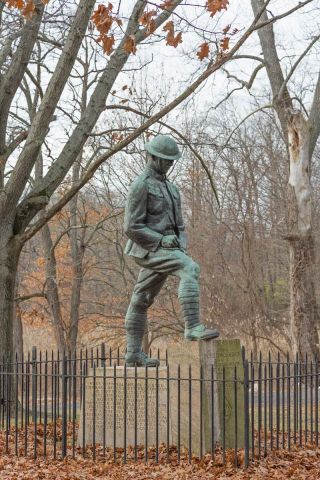 This is a story about a monument to a doughboy.

It's not the earliest, largest, or most expensive American monument to World War I, and it wasn't made by a well-known artist. On the surface, it appears to be a common type of monument, one of hundreds of bronze doughboys installed in the post-war years in cities and towns across the United States.

There are doughboys in Provincetown on Cape Cod, in Chicago, in towns across the American south such as Lynchburg, Virginia where I live, and several in New York City alone. But, even though, as Jennifer Wingate writes in her book Sculpting Doughboys, that "World War I memorials as whole ultimately reflect a surprising degree of individuality," for many bronze monuments—but especially those dedicated to the Great War—the fullness of the monuments' meaning fell apart in the decades after the deaths of the last World War I veterans.

The local stories embedded in these works of art and memorialization are just now coming back together, thanks to the efforts of programs such as the World War One Centennial Commission's 100 Cities/100 Memorials. I've been acquainted with the Timothy Ahearn Memorial for fifteen years, but am only now understand what role the large bronze doughboy played in the City of New Haven's memory of World War I.

It took a long time to get here; when I first worked on the conservation treatment of the monument, the centennial of the Great War was not on anyone's radar, and the doughboy was just another neglected monument, covered in overgrown shrubbery, one object in a city full of such objects.

​ Image above shows the Timothy Ahearn Memorial, Karl Lang, 8.5' height of bronze plus 6' (base), 1937, West River Memorial Park, New Haven, CT. Photograph by William Sacco, 2016. The memorial stands at the corner of Ella Grasso Boulevard and Derby Avenue, heavily trafficked routes into the city. Although first intended for Fair Haven, an Irish-American neighborhood where Timothy Ahearn and many members of the 102nd Regiment hailed from, the monument was placed in West River Memorial Park—itself intended as a "new memorial parkway" with a lagoon along the Boulevard, although the Ahearn Memorial was the only monument ever installed. 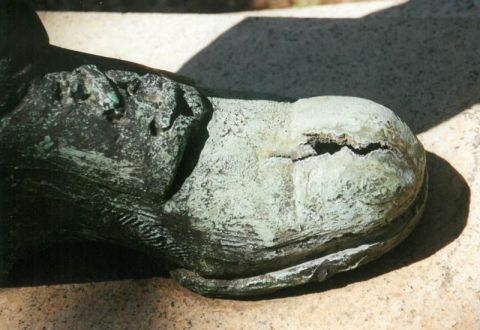 Toe of boot showing opening where dirt and other matter settled, circa 2001
In the year 2000—the era before 9/11 and the proliferation of social media—I wrote an SOS! (Save Outdoor Sculpture) grant proposal for the conservation treatment of the Timothy Ahearn Memorial in West River Memorial Park in New Haven, Connecticut. The Ahearn Memorial was, at the time, in rough shape—one of more than ten significant monuments in New Haven that had not been maintained in any way for many decades. In addition to the lack of maintenance, New Haven suffered from a problem common to American cities in the last half of the twentieth century: bronze monuments and bronze plaques were stolen and/or vandalized. One bronze public art project, for example, commissioned under the city's Percent for Art program in 1989, was stolen within a year of its installation. In an attempt to save bronze memorials that could be easily removed by vandals, some plaques were hidden away in a shed in the Parks Department to avoid being pried off of their mounts and sold for scrap at one of the city's metal yards, which to this day, must remain vigilant when suspicious metal objects come in. The remaining monuments in city parks all showed visible signs of lack of maintenance: corrosion, streaking, and blackening of features so that it was difficult to "read" figures, pictures or words at all. In the case of the Timothy Ahearn Memorial, a robust figure of a doughboy standing on a limestone base, in addition to significant streaking and a general unkempt appearance, one toe was broken open, his boot filled with leaves and dirt, part of the city's collection of unloved works of public art and history.
When preparing the SOS! grant proposal—the program ran between 1989 and 2015, although the grant awards stopped in the early 2000s (the Ahearn project got in just under the demise of the funding portion of the program)—I hit the basic research sources for public art and monuments in the Elm City, which included the Local History Room of the New Haven Free Public Library, the Whitney Library of the New Haven Museum and the various historical societies of the Ethnic Heritage Center. These repositories of local history remain key to my research and writing, even today (Yale University and its libraries and museums are equally important, but, not in this case, as the Timothy Ahearn Memorial very much speaks to city history and not to the university community, which maintains its own World War I monuments). As one of two part-time staff members of a not-for-profit park organization, I prepared the proposal in partnership with the Department of Parks, Recreation & Trees, who were the official managers of the monument and the park in which the Timothy Ahearn Memorial stands.
The SOS! grant awards were small—similar in scope to the $2,000 offered today in the 100 Cities/100 Memorials competition—but were extremely useful as leverage and to garner media attention. The Parks Department agreed to fund the remaining cost of the conservation treatment if the proposal was awarded funding.
The conservation treatment was carried out by a professional conservator, Francis Miller of Conserve ART, LLC, whose home/office was located nearby in Hamden.
In those years before the digital turn, the project was covered in the local newspapers and I wrote a short article for the Connecticut Trust for Historic Preservation's bulletin as well as a guide to the city's most iconic park monuments.
All of it paper-based, of course! But, by receiving the award and completing the conservation treatment, the effort was a model that provided impetus for the Elm City Parks Conservancy and the Parks Department to continue conserving monuments, the largest of which, the city's Soldiers' and Sailors' Monument on the pinnacle of East Rock Park, was conserved in 2006—a multi-million dollar project. The not-for-profit went on to produce Christmas ornaments of the city's bronze monuments, a new design each year, while the Parks Department set aside funds in each fiscal year's budget to address conservation treatment for park monuments, one or two at a time.
But, that cycle of interest, care and funding ended, too, and now another decade has passed. And, once again, the Timothy Ahearn Memorial is looking neglected and worn, streaking again appearing on the bronze, likely due to its exposure at the corner of two heavily traveled avenues which are automobile access routes into the city. Unlike the largest American cities—New York, Los Angeles and Boston, for example—that have active conservation and maintenance programs for their works of public art, most cities do not, thus an opportunity to kick-start monuments conservation around World War I should be grabbed quickly, such opportunities are rare these days! None of us will be around for the next centennial event, but, with some work, the monuments and memorials will be​ 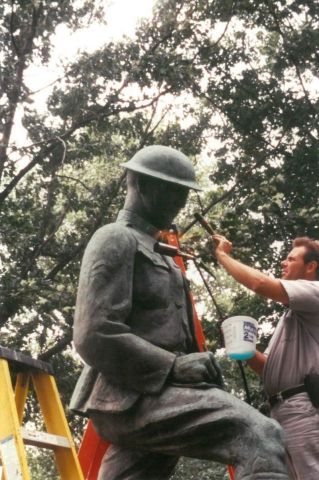 Conservation treatment of the Timothy Ahearn Memorial done by Francis Miller of Conserve ART, LLC, September 2001. Miller washed and gently scrubbed the monument, then heated the metal with a propane torch, applying a thin protective coating and then a thin layer of wax. This treatment should be repeated regularly, but, likely hasn't been done since 2001, leaving the monument exposed once again to the elements. Pitting, discoloration and the corrosion of the bronze surface continues without cyclical maintenance. The limestone base was also washed, but, its material surface is less susceptible to the elements as compared to bronze. 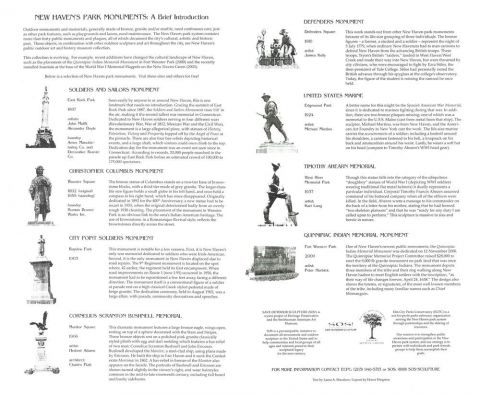 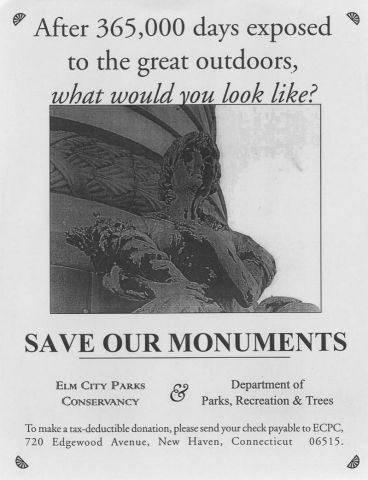 But, that cycle of interest, care and funding ended, too, and now another decade has passed. And, once again, the Timothy Ahearn Memorial is looking neglected and worn, streaking again appearing on the bronze, likely due to its exposure at the corner of two heavily traveled avenues which are automobile access routes into the city. Unlike the largest American cities—New York, Los Angeles and Boston, for example—that have active conservation and maintenance programs for their works of public art, most cities do not, thus an opportunity to kick-start monuments conservation around World War I should be grabbed quickly, such opportunities are rare these days! None of us will be around for the next centennial event, but, with some work, the monuments and memorials will be.

The next blog post in this series will look at the creation and installation of the Timothy Ahearn Memorial under the Federal Art Project of the Works Progress Administration (WPA).

Jennifer Wingate, Sculpting Doughboys, Memory, Gender, and Taste in America's World War I Memorials (Surrey, England: Ashgate Publishing Company, 2013). **The book is prohibitively expensive, but, you can read about her work highlighted by the "BackStory with the American History Guys" at http://backstoryradio.org/2014/09/19/the-great-wars-forgotten-monuments/ or read her article in American Art (vol. 19, no. 2, Summer 2005): 26-47 here:

Wingate served as one of the juror's on the World War One Centennial Commission's memorial design competition.

She has worked as a grants writer and curator in historic sites, museums, art, and park organizations. She held a Fulbright at the Swaziland National Museum in 2008-2009, and returned in 2010 under an Ambassador's Fund for Cultural Preservation award from the State Department. She curated the exhibit "An Artist at War: Deane Keller, New Haven's Monuments Man" and authored the accompanying article in Connecticut Explored magazine (Volume 13, No. 1, Winter, 2014/2015).

Laura is the author of Historic Treasures of New Haven: Celebrating 375 Years of the Elm City (The History Press, 2013) and Art of the Amistad and the Portrait of Cinqué (American Association of State and Local History/Rowman & Littlefield, 2016).

Her forthcoming book, New Haven in World War I, was endorsed by the United States World War One Centennial Commission (www.worldwarIcentennial.org). The book will be accompanied by an article in the spring 2017 issue of Connecticut Explored.

In addition, she has written articles, blog posts, and book reviews for Material Culture, The International Society for Landscape, Place, and Material Culture; Nineteenth Century; AASLH; National Council on Public History; Collections, A Journal for Museum and Archives Professionals, and Adventures in Preservation. She lives with her husband Jeffrey Nichols, the President/CEO of Thomas Jefferson's Poplar Forest, in Lynchburg, Virginia.