Commissioning The Timothy Ahearn Memorial - Part 2 of the series

This is Part 2 of Laura A. Macaluso's three part series profiling a Doughboy Memorial project in Connecticut. Again we want to thank Laura for her knowledge and insight,  which she is sharing for all our benefit. In this post, you can learn a great deal about how these types of memorials come about in the first place, and some of the process a sculpture goes through in creating an iconic statue.

Commissioning The Timothy Ahearn Memorial - Part 2
By Laura A. Macaluso

Reading over preparatory materials for the SOS! grant application from fifteen years ago, it's clear that the basics of the monument's creation and installation was known but little more than that. Several things happened in the following years that enlarged the backstory of the Timothy Ahearn Memorial in important ways, connecting information in state archives, local libraries and personal collections. In the years that the City of New Haven and the Elm City Parks Conservancy were addressing the conservation needs of bronze monuments in the park system (2001-2007), Amy Trout, the curator at the New Haven Museum, was putting together an exhibit on the Federal Art Project of the Works Progress Administration (WPA). The exhibit provided the context for the large amount of public works of art created in New Haven under the WPA in the 1930s—including the Timothy Ahearn Memorial, the only bronze monument to come out of the WPA in the city or county. 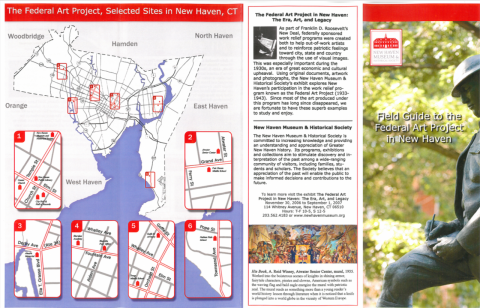 “Field Guide to the Federal Art Project in New Haven,” New Haven Museum, 2007. The Timothy Ahearn Memorial was used as the cover image, and also listed inside the pamphlet, designed to encourage viewers to visit the city’s WPA works of art 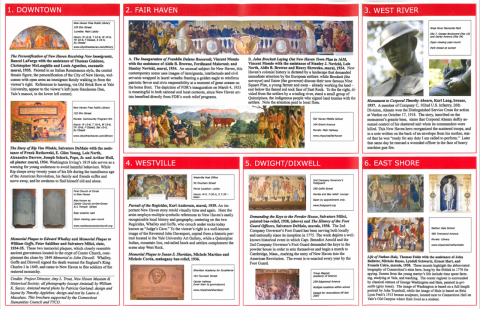 The project was something like the 100 Cities/100 Memorials “Memorial Hunters Club” in that I traveled around the city to search out the remaining WPA works of art.

From the exhibit we learned about the process of creating federally-subsidized works of art: under the WPA, local groups could sponsor a work of art, paying for the cost of the material used, while the U.S. government paid for the salaries of the artists, who were approved through a stringent application system and enrolled into the work program. The monument of the bronze doughboy stands on a limestone base, and the inscription about who commissioned the monument—and thus paid for "a ton of modeling clay" and bronze and limestone, which are costly materials—was clear: on the fourth side of the base (rear)

a bronze plaque reads (all thanks to Michael Herrick of the Historical Marker Database for this transcription): 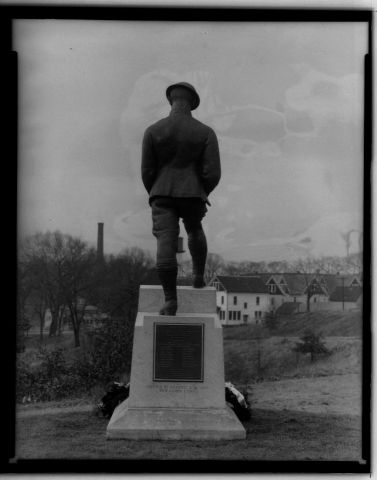 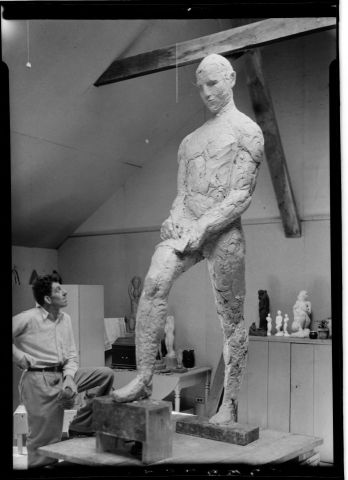 Clay model of the Timothy Ahearn Memorial with artist Karl Lang working in his studio in Noroton (Darien), Connecticut, 1937. Courtesy of the Connecticut State Library.
But, even with this very detailed inscription (which is reflective of the documentary nature of the WPA and not common to most non-WPA monuments and memorials), at the time, most of this information went over my head. As the curatorial assistant on the exhibit project, I was more interested in the artist and the memorial as a work of art. The names listed meant little and World War I so far away in my consciousness that I wrote in the SOS! application that Ahearn "left for active duty in Germany" (not quite!). The choice of Ahearn, a member of Company C of the 102nd Regiment of the 26th "Yankee Division"—and what the regiment meant to New Haven's history and identity—was also obscure, at least to me, a student of art history, not of military history. Despite my shortcomings, both the monument's conservation and the exhibit were a success. As noted in the first blog post, the positive attention regarding the conservation treatment of the memorial encouraged the Parks Department's continuation of conservation treatments for monuments across city parks. This was matched by the success of the exhibit, which caught the eye of State Representative David McCluskey who sponsored a bill in the legislature to fund a state-wide survey of WPA artworks still in existence. Although the bill was not funded, $150,000 was appropriated by the General Assembly for an inventory to be conducted by the Connecticut State Library, which contains the largest body of documentary material about the WPA in the state.

A large part of the work to inventory WPA artwork in Connecticut consisted of the digitization of these materials and the collection of artist biographies and their uploading to webpages. This work helped to bring to light the life of Karl Lang, the artist behind the creation of the Timothy Ahearn Memorial (and a second war memorial in Noroton Heights, a section of Darien, where he lived and worked). Lang was born in Biberach, Germany in 1897—just about the same year as Ahearn, whose birth date varies from 1895 to 1897. In need of work when he came to the United States, Lang worked a series of menial jobs before becoming appointed as a foreman on Gutzon Borglum's Mt. Rushmore project. He worked for the Stamford, CT based Borglum for five years before leaving to start his own studio. Thanks again to the WPA's dual interest in making art—and documenting the making of art at the same time (thus providing work to both a sculptor and a photographer)—a series of sixteen images of the Timothy Ahearn Memorial, from studio maquette (small scale model of a sculpture) to full-size clay study to finished project in situ exists. Lang is seen in one of these images, his bent knee mimicking the pose he chose for Ahearn, whose bent knee served as a writing platform in the trenches. ​ 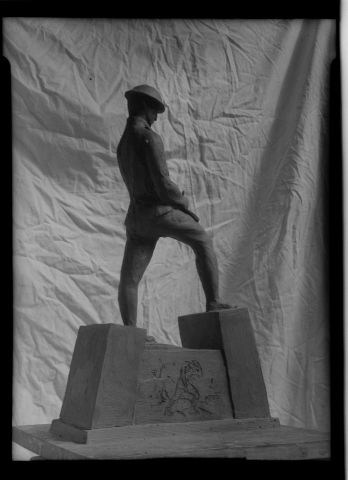 In viewing these photographs, you can trace the process that Lang, a traditionally trained artist who worked on the sculpture of the doughboy from the inside out, followed. First, Lang shaped a small maquette out of clay. It is likely that committee members met with Lang to view the small study and give approval and/or suggest changes (you can see that the original maquette featured drawings incised into the sides of the base, but this was later changed to three sides of inscriptions, which told Ahearn's story with words instead of pictures). 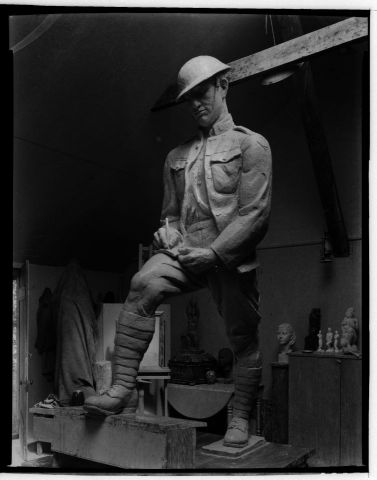 Clay model of the Timothy Ahearn Memorial in Karl Lang’s studio in Darien, Connecticut, circa 1936—1937. Courtesy of the Connecticut State Library.

Lang then crafted a large figure of a male body in clay around an armature, delineating the musculature . The figure was then built up by placing historically correct clothing to create a Great War infantry soldier: "puttees" (wrappings) around his lower legs, a wool blouse (coat), and the metal "Brodie" helmet that often appears tilted on the heads of World War I soldiers at the front. (Image 2.6) This kind of visual documentation is not often found in the study of monuments and memorials and offers a rare view into the working methods of monument makers, a process that humans have been engaged in since Antiquity.

The last part of the Ahearn Memorial backstory just came to light in 2016—a decade after my initial work—due in part to the upcoming centennial of the American entry into World War I (April 2017) and the centennial of the Armistice (November 2018).As described, I had little connection to the names listed on the plaque attached to the Ahearn Memorial beyond the two names associated to the WPA (John Murphy, mayor and the primary supporter of the WPA in New Haven and Wayland Williams, the city and state WPA administrator), but, after preparing the book, New Haven in World War I, whose publication will coincide with the centennial of the American entry into the first global war of the twentieth century, it became clear that the backstory of the monument was missing something at its core: a focus on New Haven's infantry soldiers and veterans, whose memories of World War I were replayed every year around the Timothy Ahearn Memorial, and around the history of April 20, 1918—the battle of Seicheprey, where seventeen New Haveners died together on the western front—an event little remembered today.

RELATED LINKS FOR YOUR REFERENCE:

Laura A. Macaluso, Ph.D., holds degrees in art history and the humanities from Southern Connecticut State University, Syracuse University in Italy and Salve Regina University. She has worked as a grants writer and curator in historic sites, museums, art, and park organizations. She held a Fulbright at the Swaziland National Museum in 2008-2009, and returned in 2010 under an Ambassador's Fund for Cultural Preservation award from the State Department. She curated the exhibit "An Artist at War: Deane Keller, New Haven's Monuments Man" and authored the accompanying article in Connecticut Explored magazine (Volume 13, No. 1, Winter, 2014/2015). Laura is the author of Historic Treasures of New Haven: Celebrating 375 Years of the Elm City (The History Press, 2013) and Art of the Amistad and the Portrait of Cinqué (American Association of State and Local History/Rowman & Littlefield, 2016). Her forthcoming book, New Haven in World War I, was endorsed by the United States World War One Centennial Commission (www.worldwarIcentennial.org). The book will be accompanied by an article in the spring 2017 issue of Connecticut Explored. In addition, she has written articles, blog posts, and book reviews for Material Culture, The International Society for Landscape, Place, and Material Culture; Nineteenth Century; AASLH; National Council on Public History; Collections, A Journal for Museum and Archives Professionals, and Adventures in Preservation. She lives with her husband Jeffrey Nichols, the President/CEO of Thomas Jefferson's Poplar Forest, in Lynchburg, Virginia.