This is the last installment of Laura Macaluso's three part series on the Timothy Ahearn Memorial. Laura generously provided the 100 Cities / 100 Memorials Blog with these very insightful and comprehensive articles. We want to thank her for sharing her knowledge, her experience and her insights with a community looking at WW1 memorials and their significance to our national heritage. On behalf of all our reader... Thank you Laura! 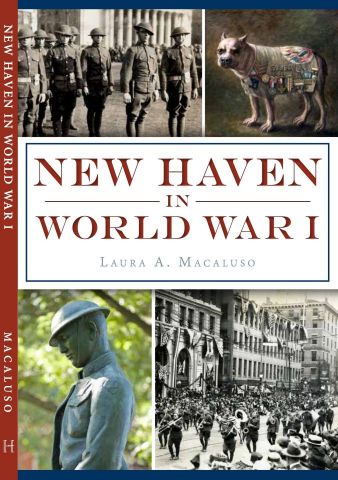 Cover, New Haven in World War I, Laura A. Macaluso, The History Press, forthcoming April 2017. The Timothy Ahearn Memorial is seen at the lower left corner.

What I hope these blog posts have shown is that the research and documentation around a single monument or memorial is a multi-layered affair.

Although much had been done already to bring the Ahearn Memorial's backstory to light, there were surprises still to come. When I started researching the book New Haven in World War I I did a wide survey of all of the library and museum collections in the city and beyond, looking for material from which to write the book.

I knew that World War I monuments and memorials would be an end chapter to the manuscript, but, was more concerned with producing the chapters with which I had far less familiarity: what was happening on the home front, for example, or the development of Camp Yale, where the 102nd Regiment of the 26th Division was formed and trained and where the famous mascot of the Great War—Sergeant Stubby—first made his appearance (Stubby was a New Haven street dog and wore a harness with a small metal tag stating "New Haven, Conn. to France, 1917-1919").

But, learning what private individuals and families still hold regarding World War I material is close to impossible—unless there is a mechanism for bringing together descendants and their materials with scholars, researchers and writers. Fortunately, that turned out to the case in the State of Connecticut, thanks to the efforts of Christine Pittsley, a project manager with the State Library who initiated the Connecticut in World War I: Sharing History/ Preserving Memories program, which visits areas around the state digitizing material in private collections.

Christine helped to identify New Haven-related material, including objects owned by a man named John T. Dillon, who came to a digitization event in North Haven. At the time, I was excited to learn that Dillon's father, also named John T. Dillon, was a New Havener and member of the 102nd Regiment and that he had kept his father's World War I materials, but I did not put two and two together until later: John T. Dillon's name was on the back of the Timothy Ahearn Memorial. He was, in fact, the chairman of the monument committee.

And, there was more. 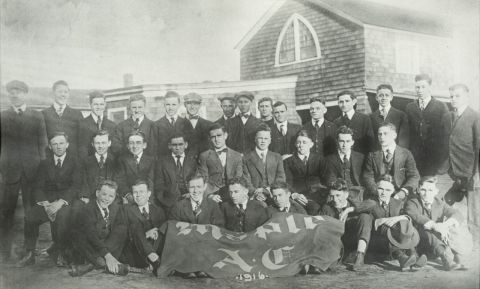 From John T. Dillon's son—a lawyer whose house stands close to the Guilford Green, about fifteen miles away from where his father lived in Fair Haven, the Irish section of New Haven—I learned that his father, and likely many like him, did not talk about their war experiences at home. Some of the fortunate ones, such as his father, went on to marriage and family, and full-time jobs.

Other, like Timothy Ahearn, were not so lucky. When Ahearn returned to New Haven he found his job at the Marlin Firearms factory gone, and he began the last phase of his young life as a migrant agricultural worker, dying from heart failure in California in 1925. But, before the war, these two young men—about twenty-one years old—lived and worked together in the same neighborhood, and likely went to the same Catholic church and school. Most importantly Dillon and Ahearn played football and baseball together at the Maples Athletic Club, a neighborhood club on the west side of the Quinnipiac River.

Dillon kept a photograph of his Maples A.C. buddies, which shows us just how closely connected doughboys could be in World War I: six young men from the Maples became members of Company C of the 102nd Regiment, Yankee Division. Company C, along with the decimated Companies D and E, fought together at Seicheprey on April 20, 1918. Neither Dillon nor Ahearn were hurt here, but seventeen other New Haveners died, many were wounded and some taken prisoner, making it—as far as I know—the deadliest day in Elm City war history.

John Dillon's caretaking of his father's materials provided a precious window into the life of a doughboy from New Haven. His hob nail boots, Brodie helmet, awards, and most of all his war diary, kept in a small pocket sized calendar with wonderfully legible handwriting (Dillon was a bookkeeper for the Knights of Columbus before the war), helped my research immensely. But, in terms of the Timothy Ahearn Memorial, Dillon post-war life as an active member of the New Haven Chapter of the Yankee Division Veterans Association contributed to how New Haven constructed meaning around World War I and created a legacy for themselves and the city. 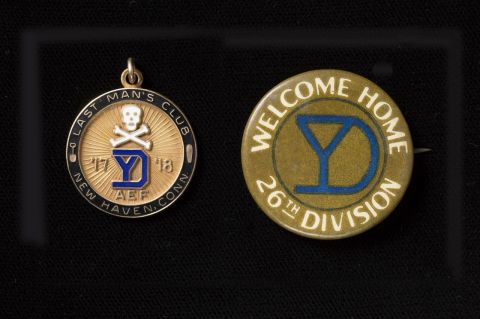 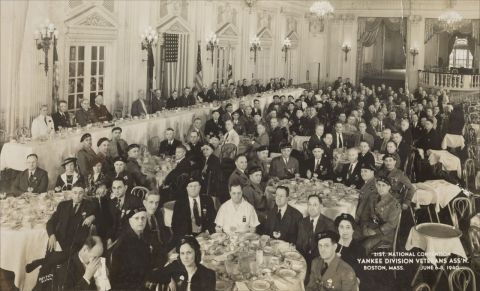 Veterans attended dinners, marched in parades, attended funerals and erected monuments and memorials. (Image 3.4) In 1921, the Adjutant General of the Army's office of the War Department officially designated Dillon a representative of the "Burial of the Unknown Dead" at Arlington National Cemetery, which may have encouraged Dillon, in the following decade, to become chairman of the Timothy Ahearn Memorial committee.

The choice of Ahearn as the subject of the 102nd Regiment's monument is an interesting one, considering that although more than 250 New Haveners died in the Great War, 17 of them together on April 20, 1918 at Seicheprey, somewhere along the way the group decided that Ahearn was the soldier they would remember. Perhaps chapter members remembered him more clearly due to their neighborhood ties (four members of the Maples A.C. including Dillon, were on the memorial committee), or maybe they recognized—when there was not yet a full understanding of post-traumatic stress disorder—that the war claimed victims long after armistice in 1918.

Their choice was sanctioned by Yankee Division retired general Clarence Edwards, who said that Ahearn's contributions "best exemplify the spirit of the Yankee Division." Ahearn received the Distinguished Service Cross, the Croix de Guerre and the Italian War Cross for his heroism at Verdun in October 1918 and thus the monument recognizes him as an individual, but also as a model for the whole division (not unlike Stubby, who was first mascot of the 102nd Regiment, but became recognized by the 26th Division as a whole). 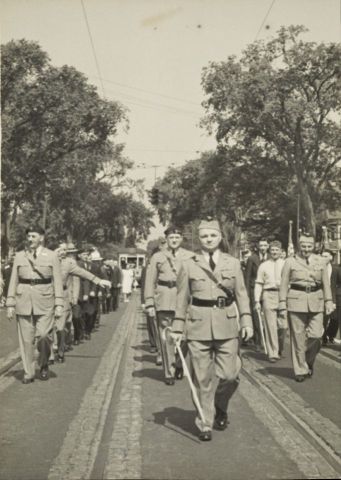 In the 1937 program for Seicheprey Day—the 19th Annual Observance on April 20—Dillon asked veterans and friends to "Buy A Timmy Ahearn Tag" which were small pen and ink drawings of Lang's monument sold by the Women's Auxiliary, YD Post 130, American Legion, and "wives, sisters and sweethearts of the members of the New Haven Chapter, YDVA and friends and neighbors of the late Timothy Ahearn." The Seicheprey Day program shows just how large these yearly events were; a street parade beginning at 2:30 PM included tanks and planes flying overhead, memorial exercises on the Green, a banquet at the Hotel Garde with toasts at 6 PM, and finally, everyone went to the State Armory at 9 PM for the "Timmy Ahearn Memorial Benefit Vaudeville Show" with Elsie Janis the "sweetheart of the AEF." Janis came to New Haven from her home in Beverly Hills to help raise money for the Ahearn Memorial and she received only her expenses. Their fundraising efforts were clearly successful, as the monument was installed in time for Armistice Day on November 11, 1937.

The last object kept by John Dillon of his father's war service and post-war years as an active veteran is the most wonderful of all: a three minute, 24-second home movie taken of the parade and dedication ceremony of the Timothy Ahearn Memorial. John Dillon (junior) appears as a little boy in a coat and hat—his father was likely marching in the parade, as he always did and he appears at the 2.58 mark speaking at the monument itself

The Timothy Ahearn Memorial went on to be a focal point of memorialization for veterans in the Elm City; according to the New Haven Register, "each year members of the Maples A.C. join with the Yankee Division Veterans Association and gather to pay tribute to Ahern after the regular Veterans' Day services on the New Haven Green." And, from another article in the New Haven Journal-Courier, it is noted that in 1942 Dillon's daughter Marie helped to unveil the city's next and last World War I Memorial: the 102nd Regiment, Yankee Division plaque, installed close to the field where Camp Yale housed members of the 1st and 2nd Connecticut National Guard, which became the 102nd Regiment in August of 1917.

Dillon remained active with the YDVA till his death in 1977; the last gatherings of World War I veterans in the state happened in the early 1980s. 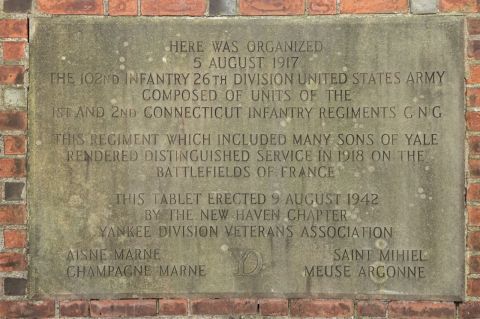 ​ Excavating the backstory of the Timothy Ahearn Memorial was a great learning experience. Although, putting together pieces and parts from multiple sources is a challenge, you don't really know what is out there until you look—and ask. People working outside of the practice of public history are often surprised that someone is interested in seemingly mundane or personal objects, such as an old pair of shoes, a photograph or a home movie. But, as we've seen, such objects help to illuminate a past that seems very far away.Some monuments and memorials will not have such extensive backstories—but you may be surprised. No matter what you turn up in your own monument's "search and rescue" project, each contribution supports the larger story of the United States in World War I and the ways in which different communities constructed their war memory. The World War I Centennial Commission has taken an all-encompassing approach to remembering the Great War—commissioning a new memorial, creating educational materials for teachers, and hosting states' websites, etc.—giving everyone the opportunity to participate in one form or another. I don't know if anyone or any group in New Haven is going to spearhead the conservation treatment of the Timothy Ahearn Memorial (which he needs and deserves), but I wouldn't pass up the opportunity to get matching monies, and to use my town's monuments and memorials to tell the local stories of the Great War experience. 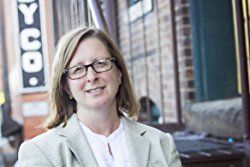 Laura A. Macaluso, Ph.D., holds degrees in art history and the humanities from Southern Connecticut State University, Syracuse University in Italy and Salve Regina University. She has worked as a grant writer and curator in historic sites, museums, art, and park organizations.

She held a Fulbright at the Swaziland National Museum in 2008-2009, and returned in 2010 under an Ambassador's Fund for Cultural Preservation award from the State Department. She curated the exhibit "An Artist at War: Deane Keller, New Haven's Monuments Man" and authored the accompanying article in Connecticut Explored magazine (Winter 2014-2015). Laura is the author of Historic Treasures of New Haven: Celebrating 375 Years of the Elm City (The History Press, 2013) and Art of the Amistad and the Portrait of Cinqué (American Association of State and Local History/Rowman & Littlefield, 2016).

Her book, New Haven in World War I, was endorsed by the World War One Centennial Commission, and she will be speaking at the international symposium "The Myriad Faces of War: 1917 and Its Legacy" at the Museum of New Zealand Te Papa Tongarewa, both in April 2017. She lives with her husband Jeffrey Nichols, the president and chief executive officer of Thomas Jefferson's Poplar Forest, in Lynchburg, Virginia. She can be reached at lauramacaluso@sbcglobal.net.