Our director of Communications, Chris Isleib, sent me a link to this article. It tells the story of a citizen in Cape May County who wants to refurbish the local WW1 memorial to commemorate the sacrifice of the local veterans who served a century ago.

HELP US CONNECT WITH THESE GOOD FOLKS AND GREAT PROJECTS.

We have $200,000 in matching grants available for project just like this... and there are less than 100 days left to submit grant applications via the 100 Cities / 100 Memorials Website.

We have resources, and a national spotlight for these projects, but we need your help to get the word out. 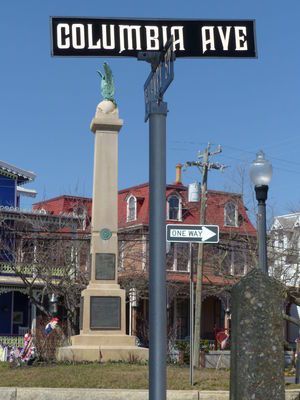 CAPE MAY – Kate Wyatt, speaking for the Greater Cape May Historical Society, asked Cape May City Council March 7 for support in helping the society celebrate the centennial of America's entry into World War I.
It was in 1917, after a Presidential election in which Woodrow Wilson, former New Jersey governor, ran as the candidate who had kept America out of the war, that Wilson responded to continued German attacks on American merchant vessels by taking the country into the stalemated European conflict. Wyatt said that the Soldiers and Sailors Memorial, on a triangular island at the intersection of Columbia Avenue and Gurney Street, is "the only memorial" in Cape May County erected to commemorate the American servicemen lost in that war, as part of its "all wars" theme.
It was dedicated July 4, 1923. On behalf of the Historical Society, Wyatt requested city help in the efforts to mark this important anniversary. She requested that the city polish the large base plaques at the memorial making it easier for visitors to read the history they convey. She also asked that the city plant and maintain a red-white-and-blue garden theme at the base of the monument. Lastly, she asked that the city helps to ensure the presence of a speaker at the monument on Veterans Day. The Monument The obelisk, topped by an eagle with wings outstretched, displays metal plaques that honor veterans from each of the nation's wars starting with the Revolution.