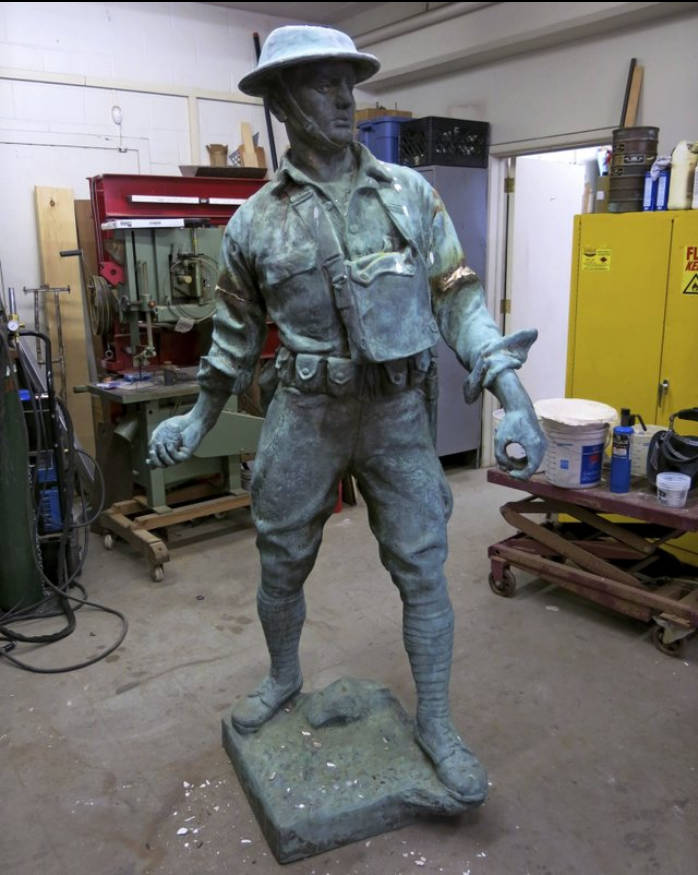 In this March 30, 2016 photo provided by NYC Parks, the World War I Highbridge Doughboy statue is repaired at the NYC Parks monument repair facility in the Brooklyn borough of New York. World War I monuments nationwide have been forgotten about and fallen into disrepair. The centennial of America’s involvement in World War I has drawn attention to the state of disrepair of many monuments honoring soldiers, galvanizing efforts to fix them. (NYC Parks via AP)

NEWPORT, R.I. (AP) — A World War I monument in Rhode Island no longer bears the names of soldiers who died fighting; the bronze plaques were stolen decades ago. A statue of a WWI soldier in New York City has a dented helmet and missing rifle. The wooden rifle stack on top of a monument in Washington state has rotted away. Trees memorializing soldiers from Worcester, Massachusetts, have died.

The 100th anniversary this year of America's involvement in the "Great War" has drawn attention to the state of the monuments to its soldiers and galvanized efforts to fix them.

Many were forgotten about over time, or no one took responsibility for their care. Some were looked after, but they're in need of repairs, too, after being outside for so long.

"There are some cases of vandalism, but in general it has been time and a lack of maintenance and really nobody paying much attention," said Theo Mayer, program manager for the U.S. World War I Centennial Commission's 100 Cities/100 Memorials program . "Somehow the war slipped into our historic unconscious, and so did the memorials."

The centennial commission and the Pritzker Military Museum and Library in Chicago are helping communities that are restoring and rescuing their memorials. Fifty matching grants of up to $2,000 each were awarded in late September. They're accepting applications for another 50 grants, to be awarded in April.

The nation owes it to WWI veterans, "lest we forget," said Kenneth Clarke, president and CEO of the military museum.

"They can't speak for themselves. There's none of them left. It's up to us to carry this legacy forward," said Clarke. "That's a responsibility we have as citizens of this great country."

The first group of grant recipients includes a project to replace the plaques in Newport, Rhode Island; repairs to the World War Memorial in Raymond, Washington, and to the Highbridge Doughboy statue in New York City; and tree plantings and restoration work for Memorial Grove at Green Hill Park in Worcester.

The plaques were stolen from the Miantonomi Memorial Park Tower in Newport nearly 40 years ago.

"Why hasn't anyone replaced them? I don't know. Apathy? I just don't understand," said Bob Cornett, who's working with the city on the project.

The Washington memorial, tucked in the corner of a park, was becoming an eyesore because of the missing top and paint peeling off the pillar, said Army veteran Gordon Aleshire. Now it has been recoated, a bronze rifle stack has been made and it's being moved next to another war memorial.

The Highbridge Doughboy was erected in the Bronx in 1923. It was later vandalized and moved into storage in the 1970s. It's currently on display in Central Park. It will be relocated to a park near Yankee Stadium when it is cleaned and fixed. The grant will help the city's parks department replicate the main dedication plaque.

In Worcester, an American Legion post planted maples to honor those who died in WWI, dedicating it in 1928. The post later closed, and about half of the trees have died. The Green Hill Park Coalition is working with the city to restore the grove.

The first 50 memorials selected are in 28 states. The Victory Memorial in Chicago, also known as Victory Monument, commemorates the 370th Infantry Regiment, an all-black unit that served with French soldiers. It has been well cared for. Local residents are going to plant a memorial garden and teach high school students more about the war. A poppy garden is being planted at North Carolina State University's Memorial Bell Tower, as well.

The projects that received grants must be completed by the centennial of the war's end, Nov. 11, 2018. The centennial commission is building the National WWI Memorial in Washington, D.C. 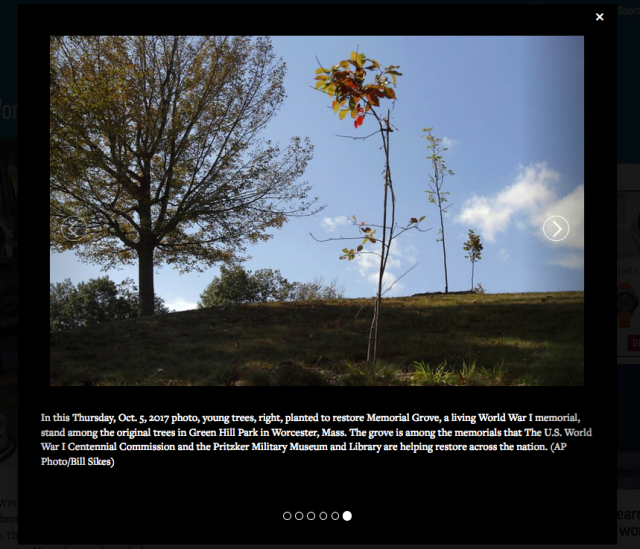 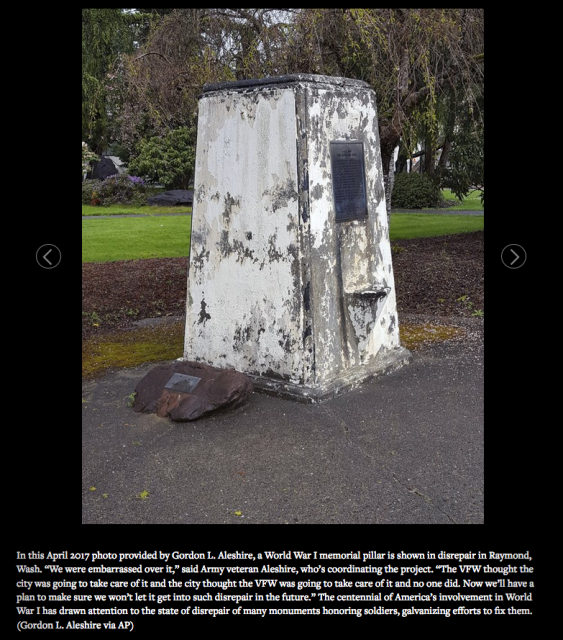 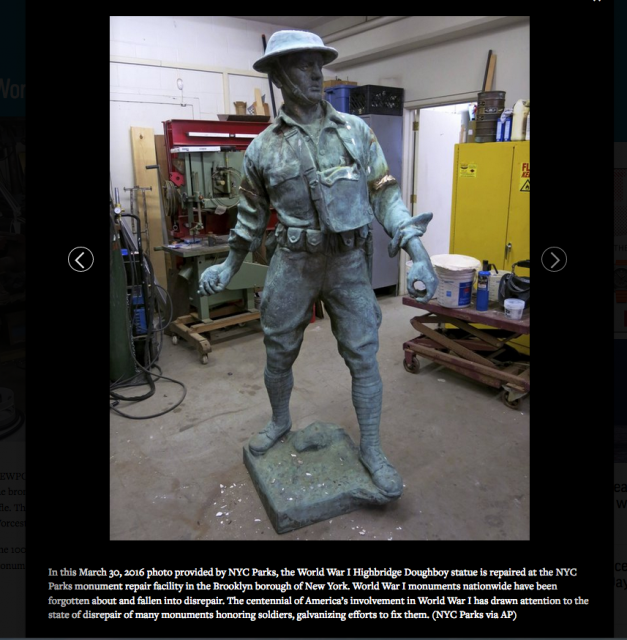 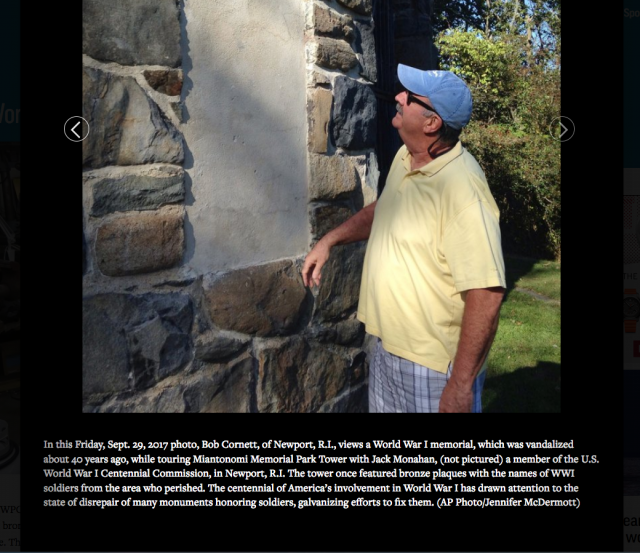 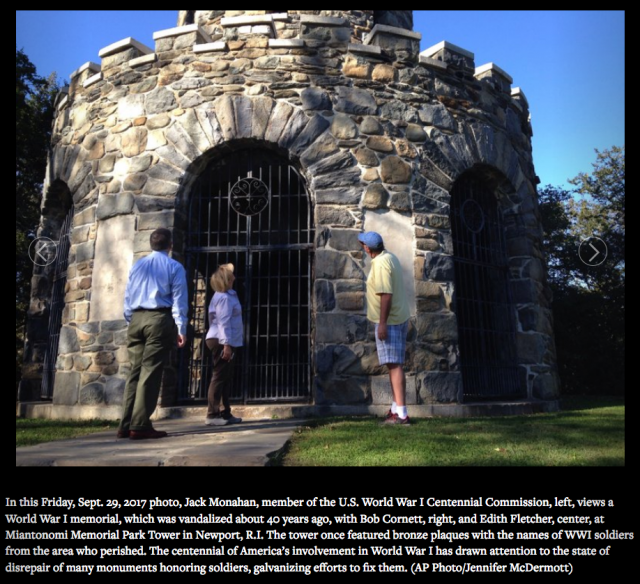 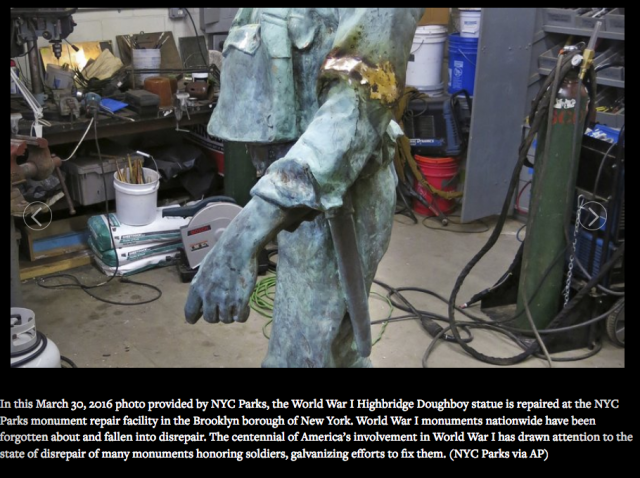