PROJECT PROFILE: Time is on the side of Rutherford's WWI Monument 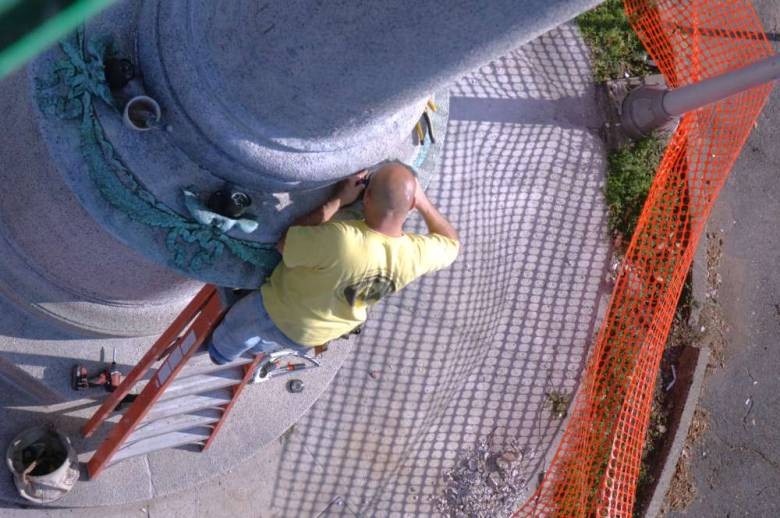 PROJECT PROFILE: This article talking about the Rutherford WWI Monument is a great example of how a restoration project can tie a community rediscover its past and how you can leverage a phase of your project into the 100 Cities / 100 Memorials program as a submission.

From an article written by

World War I resulted in such a large number of casualties that when it was over it was believed to be "The War to End All Wars." Rutherford's monument, originally called "The Soldiers' and Sailors' Monument," honors 19 sons of Rutherford who sacrificed their lives for their country during World War I.

Edgar Williams, the architect brother of the Pulitzer Prize-winning poet William Carlos Williams, designed and built Rutherford's World War I Monument in May of 1920. The architect, who died in 1974, had a strong influence on the civic heart of the borough and felt that the boys lost to the war should be honored in a monumental way-an ever-burning torch in the middle of Rutherford's downtown. A bronze plaque on the pedestal bears the names of the 19 Rutherfordians who died in the war along with 19 stars to represent each one. Also listed are the battle locations in which Rutherford soldiers fought: Somme, Cantigny, Marne, Cambrai, Chateau-Thierry, Mount Kemmel, St. Mihiel, Meuse-Argonne and Piave.

At the July 25 mayor and council meeting, the mayor reappointed Bill Galloway, Virginia Marass, Teddy Van Winkle and Rod Leith to the WWI Committee. The mayor said he intends to appoint other members at a later date. In addition, a resolution passed allowing for the appropriation of $1,040 from a 2015 Bergen County Historical Grant.

Mayor Joe DeSalvo said the WWI Monument Committee will work with the historic preservation committee and Bruno and Associates to obtain grants.

The mayor and council recently awarded a $9,500 consultant contract to Architectural Preservation Studio PC (APS). APS is preparing a bid solicitation for the work on the next phase of repairs and restoration on the WWI Monument, with Sandeep Sikka as the lead APS partner on the project and a maximum budget of about $89,000. The scope of Phase 2 is to address drainage repairs, safety buffers for the immediate circle around the monument and restoration work on the monument's bronze ornamentation. The scope of work also includes applying water repellant to the monument surface to keep it from suffering further water-related deterioration, said Borough Historian Rod Leith.

Leith is also hoping that funds will be left over for salvage and preservation of the time capsule and its contents, which have been under the monument since 1920. The items would make up a special exhibit in 2017 and 2018 that would coincide with the anniversary of the entry of America into WWI and the peace treaty signed in 1918.

The Rutherford Historical Committee plans to apply to the Pritzker Military Museum and Library for a grant of $2,000 with the 100 Cities/100 Memorials Grant Program. The grant would have to be matched by the town. Rutherford would apply and use the money-a total of $4,000-to offset the cost of hiring a conservator for the WWI time capsule consulting work, said Leith.

READ THE FULL ARTICLE AT NorthJersey.com

4 Questions With Dr. Mark Levitch - Q1
Teaming up with the American Legion for the 100 Ci...