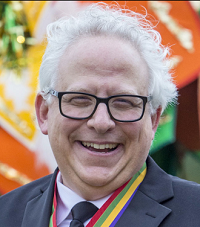 Our relationship with him was marked by his his warm, endearing personality. He was always welcoming to our questions, and generous with his time and his insights. It was an honor to have him as a friend to us, and to our organization. As one of entertainment's greatest talents, he will always be remembered and greatly missed, for his immeasurable contribution and impact on television.

The U.S. World War One Centennial Commission extends deepest condolences to Mr Glasberg's family and friends, and trust that his lasting legacy will bring comfort to his loved ones.

t was with great sadness that the U.S. World War One Centennial Commission learned of the passing of The Honorable John Warner. He was a senior advisor at the law firm of Hogan Lovells US LLP. Upon graduation, in 1953, from the law school at the University of Virginia, he served as a law clerk for Federal Circuit Judge Prettyman, then for 4 years as an Assistant U.S. Attorney for the District of Columbia, and then joined the firm and became a junior partner.

In 1969 he received a Presidential appointment as Under Secretary of Navy and later became Secretary of Navy during the period of conflict in Vietnam. In 1979 he was elected to the U.S. Senate and served for five consecutive terms establishing a record of being the second longest-serving Senator in the history of the Commonwealth of Virginia. He returned to the practice of law at Hogan Lovells in 2009.

At 17 years old, he enlisted in Navy during the last year of World War II and attained the rank of Petty Officer 3/c; subsequently, he re-enlisted in the Marine Corps, was commissioned, and served in Korea in 1951-52 as a First Lieutenant.

During all of his 30 years in the Senate, he served as a member on the Armed Services Committee; and during his final years the Committee members elected him to leadership positions: first as Ranking Republican, then for his last six years he was full Committee Chair.

Between 1974 and 1976, Senator Warner was confirmed by the U.S. Senate to serve as Administrator for the American Revolution Bicentennial Administration, where he administered federal programs and grants to all 50 states; and, coordinated with 22 foreign nations that participated in this historic 200-year anniversary of the founding of our nation.

"I am pleased to serve as one of several pro bono advisors to the WWI Centennial Commission. I draw on my vivid recollections of stories from my Father who volunteered for service in WWI as a U.S. Army medical doctor, was commissioned as a Captain, then promoted to Major, and was injured and decorated. His division, the Red Diamond 5th, was in major battles including Verdun, Saint-Mihiel, and Meuse-Argonne. He was often stationed in dressing stations and other forward treatment facilities caring for the wounded, performing the difficult task of triage, as they were being evacuated from the battlefield. He was decorated by France with the Croix de Guerre.

"I have, off and on, studied this epochal War and made a personal tour in 1984, with the assistance of the Army historical section and the Battle Monuments Commission, to all of the areas in France where Father served, following the notes in his 'little diary.'”