On April 7, 1917, the morning after the United States declared war on Germany, federal agents arrested five Hindoos in San Francisco. These men had been under surveillance by detectives on the payroll of the British government. Now they were charged with conspiring with Germans to overthrow British rule in India. Three months later, they were five among the 105 Hindoos, Germans, and Americans indicted by a federal grand jury in San Francisco. Then in November the trial started in federal court, lasting five months.

The events leading up to the trial had been building up for a few years. In making the case against the defendants, the U.S. government argued that Hindoos and Germans in the United States had conspired to bring about a revolt in an attempt to overthrow the British colonial government in India. It mattered since the U.S. and British governments enjoyed good relations with one another. Secondly, prosecutors pointed to a gun running operation that was intended to supply arms to Indian rebels who wanted to come out from under the yoke of the British. In this segment, I will write about how Indians tried to foment revolution from thousands of miles away. 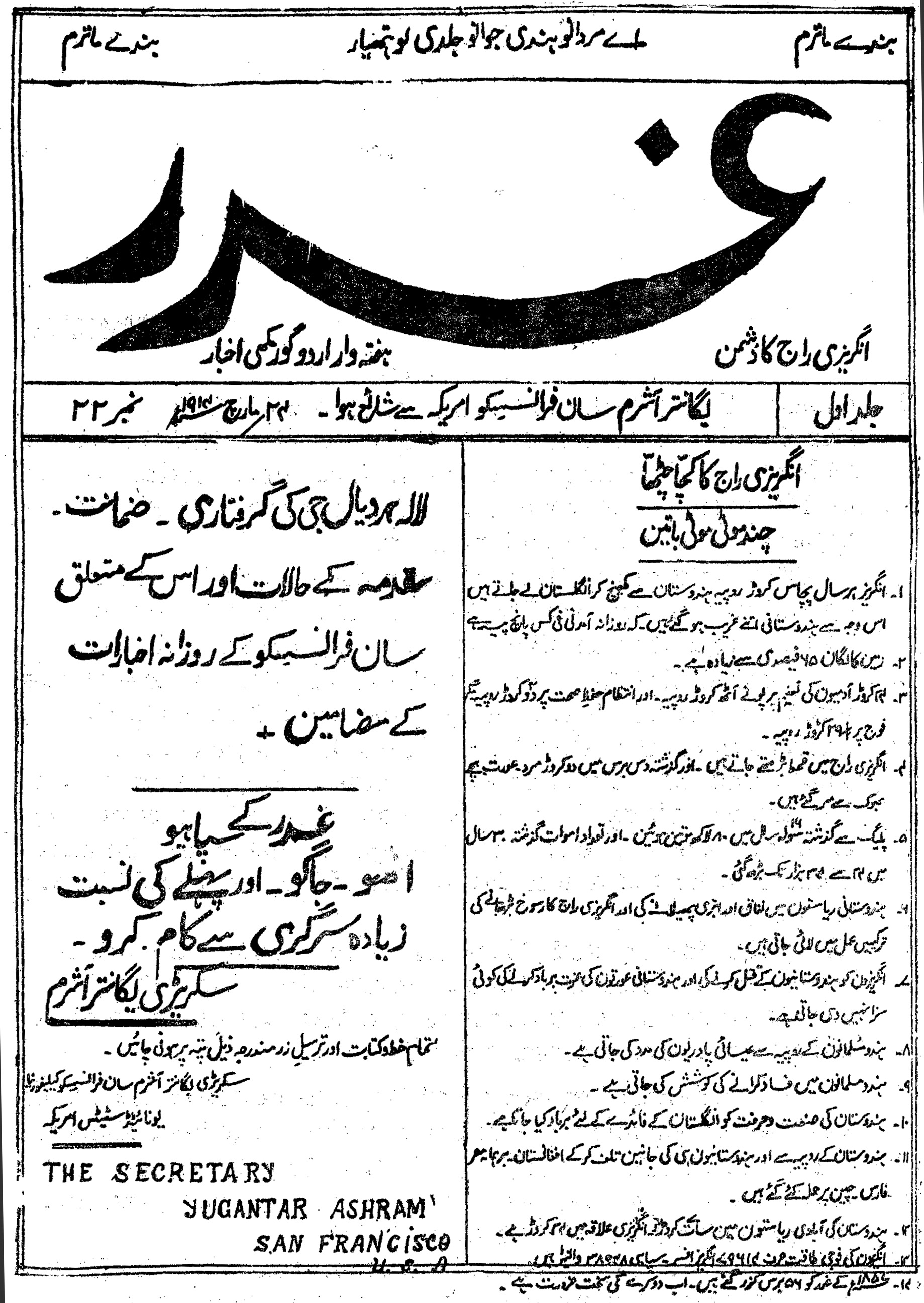 Issue of the Gadar newspaperThe movement in the West to overthrow the British began in 1911, when Har Dayal came to the United States. An Indian scholar at Oxford University, he gave up his scholarship to protest British rule and returned to India only to get into trouble with the British government in India on an unrelated issue. He left India for the United States and secured a job at Stanford University teaching Indian philosophy. But Har Dayal’s revolutionary zeal got him into trouble with the university when he openly expressed anarchist views and overplayed his connection with the university. Active politically, Har Dayal organized Indians on the West Coast into the Hindoo Pacific Coast Association, also known as the Gadar Revolutionary Party.

A note on the use of the word Hindoo: it was a term of derogation used to refer to South Asians, but was also a misnomer as the people who participated in the freedom struggle for India subscribed to all religious beliefs, not just Hinduism. Although in the press from the time the case is known as the Hindoo-German Conspiracy Trial, I will use the term Indian, which reflects more accurately the makeup of the members of the Gadar party.

Starting on November 1, 1913, the Gadar party put out a weekly paper called Gadar, meaning revolt, using a small hand press. The paper first came out in Urdu, then Gurmukhi, a language spoken in part of the northwest in India. Later, the paper was sometimes also published in Gujrati, Hindi, Pashto, Bengali, English, German, French and others. “No single society in India or even ten of them, published so many newspapers in various dialects, for in India or abroad no publishing house has, within the last four years, published so many and such excellent books which pierce the mind of masses and give them both enlightenment and enthusiasm, and which remain up to this day unanswered by the English Government,” wrote Ram Chandra. (1)

The office of the paper was known as the Yugantar Ashram, after Buddhist rest houses that provided shelter to the weary. In addition to the printing press, it also housed workers who worked at the Ashram and Indian visitors to San Francisco.

But the course of the paper had not run smoothly since its inception. In March 1914, the U.S. government arrested Har Dayal for his activities and held him for deportation. If deported, the British government in India would have charged him with sedition, punishable by death. Later, after his friends posted bail for him, the U.S. government released him. The following month, however, he jumped bail and fled the U.S., seeking shelter in Switzerland. From there he went on to Berlin to work with the Germans for India’s independence. 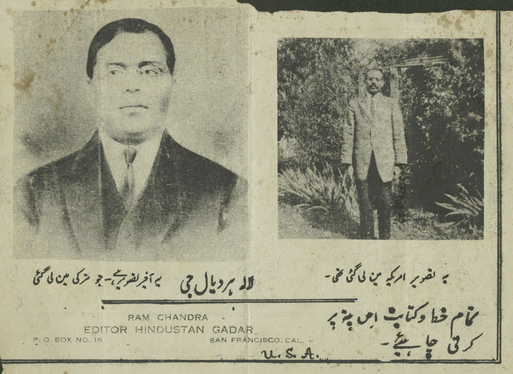 Ram Chandra, editor of the Gadar NewspaperBefore he’d left, Har Dayal had anointed Ram Chandra as the editor of the newspaper that he had started. Ram Chandra continued his mentor’s work with the help of two other Indians, Bhagwan Singh and Maulvi Barkatullah, who tried to recruit revolutionaries on the West Coast by giving readers information on the harshness of British rule in India. Other Indians also helped out with the press that printed not just the newspaper but books at their office on Valencia Street in San Francisco.

Since the British government maintained an iron grip on the press in India, revolutionary papers were the only way to disseminate information that contradicted the government’s take on events. For example, the Gadar issue of August 14, 1914 says, “News has reached that the British intend sending Indian troops to fight the Germans in order to save their white soldiers...When we will be told that Indian Sepoys are fighting the Germans in order to keep India in slavery. Look and understand, beloved brethren; even in Europe the British save themselves and get the Indians slain.” (2)

And from the same issue, “Oh Indians, help the Germans. How and in what manner? In this way. Start mutiny in India...”

In January 1917, a split occurred in the party, according to the government’s notes.(3) Three men, who were involved at the Ashram – Bhagwan Singh, Santokh Singh, and Ram Singh – led a revolt against Ram Chandra, the editor, leading to his ouster.

According to Bhagwan Singh’s diary, translated from a non-Latin language into English, the Council of the Yugantar Ashram asked Ram Chandra to resign from the Gadar party because of a lack of transparency in his accounting. They alleged that he had used Ashram money to acquire personal influence. (4)  A new editor was named and Ram Chandra’s name was removed from all accounts. Bhagwan Singh became the head of the new party that that came into existence to oppose Ram Chandra.

Ram Chandra now moved from Valencia Street to 5 Wood St. in San Francisco and published a dueling paper of the same name. The many testimonies in the case leave doubt that the charges made by Ram Chandra’s former friends had any merit. They seemed to have been based on jealousy, as the paper was published in Ram Chandra’s name. Bhagwan Singh was a poet and writer himself and may well have resented the recognition that comes from publishing.

A supplement to the Gadar issue of April 15th, 1917 says, “Bhagwan Singh was a bad character and paid no attention to the Ashram council and the brethren. In the end, driven to desperation we expelled Bhagwan Singh, Santokh Singh, and Ram Singh from the Ashram.” (5)  It is signed by the ‘Public Servants of the Ashram’ and dated March 28th, 1917.

In 1917-18, these men played an important role in taking the trial to its unexpected climax.