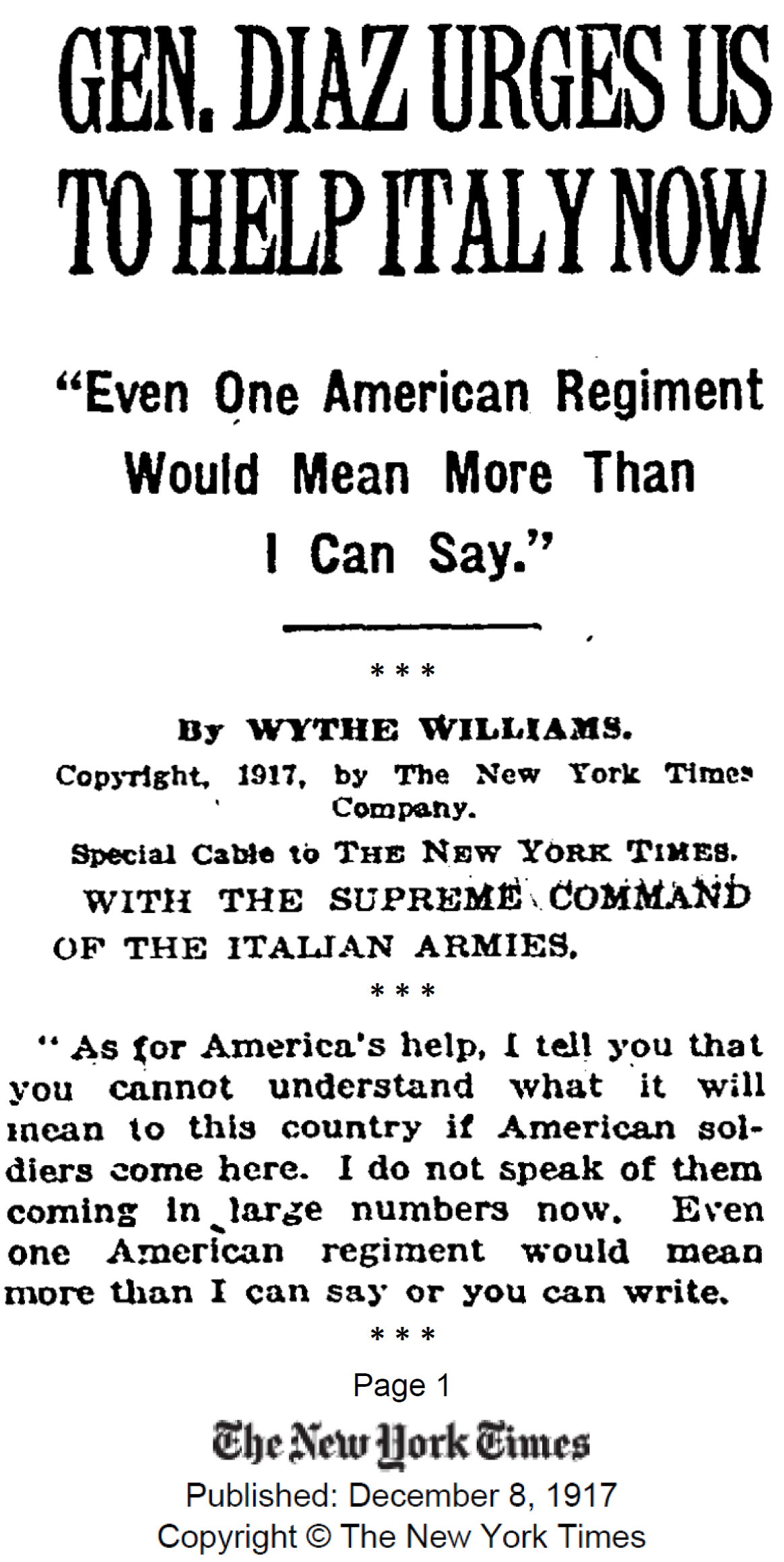 Selection
of the
332nd INFANTRY REGIMENT
for duty on the
ITALIAN FRONT
(in the words of General John J. Pershing & Colonel William Wallace)
____ ♦ ____

"(Diary) Paris, Tuesday, July 17, 1917. Dined on Friday with Thomas Nelson Page, our Ambassador to Italy, who praised Italian armies and wants us to send them troops.

"The suggestion from Ambassador Page that we send a few divisions to aid the Italians indicated that they were about to enter the lists with the other Allies to contend for an allotment of American reinforcements. The Ambassador seemed disappointed to find me strongly opposed to the use of our troops anywhere except on the Western Front and as components of our own army."  —  General Pershing 1

"(Diary) Paris, Thursday, May 2, 1918. Just returned with Colonel Le Roy Eltinge and Colonel Boyd from two-day conference of Supreme War Council at Abbeville. Extreme pessimism prevailed regarding present crisis. Everybody at high tension. Allies persistent in urging unlimited shipment of our infantry and machine gun units. Discussion at times very lively. Have agreed to send a regiment to Italy.

"After the sessions I spoke to M Clemenceau and Mr. Lloyd George, suggesting that sending an American regiment might help to stimulate the Italian morale and asked their opinion. They both thought it would be a wise thing to do just at this time. I had opposed scattering our forces in this way, but the appeal of Italian officials and the recommendations of Americans who had visited Italy indicated that under the circumstances an exception could well be made for a small force.

"When I told Mr. Orlando that this might be done, with the possibility of increasing the number up to a division later on, he was much pleased. Meanwhile, the President had been pressed by Italian representatives to send them troops, and word came by cable a few days later that he thought we might brigade some of our troops with the British and French divisions then in Italy. But to leave them independent was far preferable and the subject was not taken up with the Allies, my idea being that if we should find it necessary to send more troops to Italy it would be best to build up a division of our own."  —   General Pershing 2

"(Diary) Chaumont, Thursday, June 13, 1918. Lunched with General Bliss on Monday at Versailles. Saw General di Robilant there and discussed transportation of our regiment to Italy. [General di Robilant was at that time the Italian Military Representative on the Supreme War Council]

"While the Italian Government was anxious to have American troops, yet so far they had found no sea transportation available to bring them over. Mr. Orlando, the Italian Prime Minister, wanted them sent direct from the States in order that they might go through Italy by rail to show the people that Americans were actually there. Moreover, he wanted them to be other than naturalized Italians for fear the people might doubt their nationality. When we came to consider the details, General di Robilant proposed that they should be transported from New York by Italian shipping, and entered into a lengthy discussion of their plan to send over three or four ships, to which I readily agreed. But it turned out later that the vessels he counted on were already included in the list of those which the British were going to use for carrying our troops. After a delay of about a month, and acting under instructions from Washington, I directed that the 332d Infantry Regiment of the 83d Division, which had recently arrived, should go to Italy by rail."   —   General Pershing  3

"(Diary ) Chaumont, Sunday, June 23, 1918.  M. Clemenceau, General Foch, and M. Tardieu, with Generals Weygand and Mordacq, came to Chaumont to-day for conference on increase of American manpower.  General McAndrew and Colonels Fox Conner and Boyd were with me.  Took Clemenceau to see some of our troops. Foch asks for our regiments to strengthen French divisions. 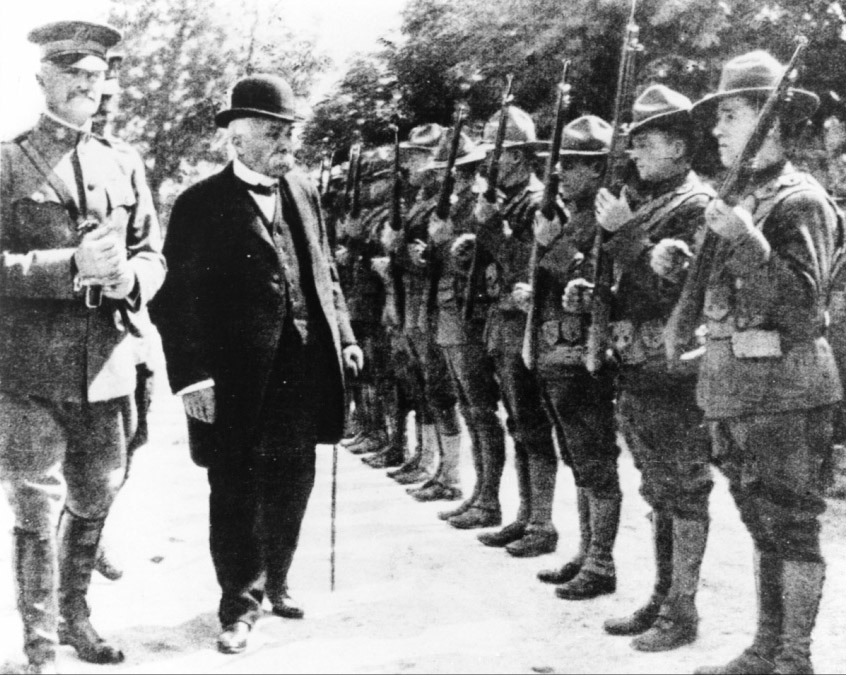 "... M. Clemenceau and I, driving together… went to the headquarters of the 83d Division, Major General E. F. Glenn commanding, which was billeted at Montigny, not far from Chaumont. We saw a battalion at Essey and one at Mandres… During the inspection, M. Clemenceau found in the ranks several men of foreign birth from various countries, which interested him very much. He afterwards chatted with the officers and made a short speech to them and the inhabitants of the village, who had gathered around him.

"It was one of those beautiful days that leave a lasting impression, … we motored along through the rolling country that rose toward the foothills of the Vosges Mountains …"   — General Pershing 4 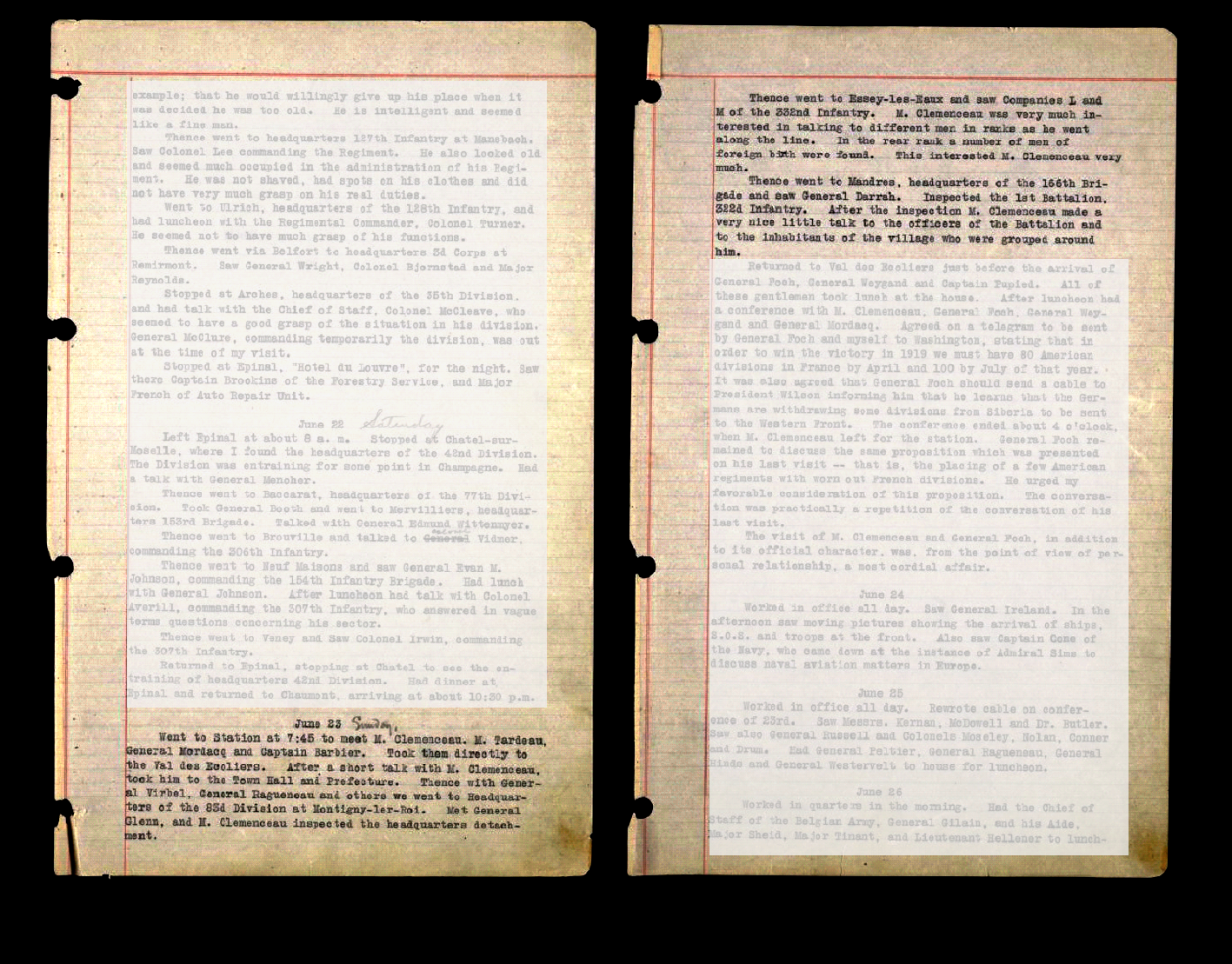 Sunday, June 23, brought General Pershing and Premier Clemenceau, the Tiger of France, for an official review of the 332d.  Both made speeches to the officers and French townfolk who had come out to see the review.  Gen. Pershing spoke glowingly of the general military appearance and soldierly bearing of the 332d Regiment. Clemenceau’s speech found great favor with the French people; it met with enthusiastic applause. — History of Company "D" 332nd Infantry  5

"... In less than a week after we arrived in France we were reviewed by General Pershing and M. Clemenceau.  We were told that it was the best appearing regiment that he had seen in France, consequently, in a week or so, we learned that our regiment was chosen to go to Italy. ..."  — Corp. Harry Knowlton, HQ Company, 332nd Infantry 6

“We had been here (the French villages) for a short time when who should come along like a rocket but General Pershing and His Excellency Monsieur Clemenceau, the Prime Minister. Six companies were paraded immediately—inspected carefully by a big staff of inspectors—and they sailed away. Next day General Glenn and I were ordered to report to General Headquarters …the Chief of Staff, General McAndrews said “Colonel your regiment has been selected to go to Italy. Prepare it. … I securing a prize coveted by every officer and man in France. ‘Fortuna della Guerra’.” — Colonel Wallace  7