The 332nd Infantry is reunited under Canvas!

Described in the words of those who where there 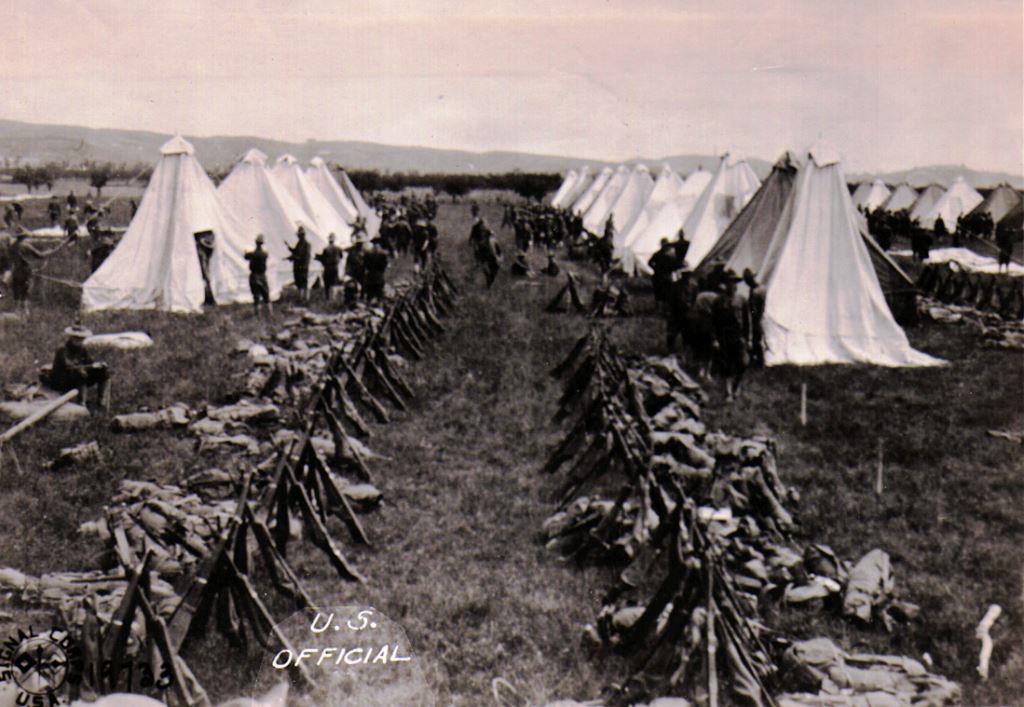 Thirteen lost its unsavory reputation when, on August 13, 1918, the entire 332nd Regiment arose early and marched to a point 1 km. east of Valeggio on the Mincio River. On August 14, camp was completely and carefully pitched. The change from the stuffy and ofttimes crowded conditions prevalent in the villages to an open air camp was welcome; and from now on till their departure from Valeggio this camp and its surroundings brought much pleasure to the men of the 332nd. The spot was picturesque.

Just a little distance to the north the Custoza hills arose, and on their crest could be seen the monument which commemorates the battles of 185^ and 1866 between Austria and Italy, while beyond Custoza the Alps stood in bold relief, occasionally dotted, even in the hottest weather, by snow-covered peaks.

Valeggio itself, one kilometer west, lay around the base of the north side of a hill, rising sheerly 400 ft. from the plain, on the camp side, and dropping abruptly 500 ft. to the Mincio River on the west. An historic looking and age-beaten and medieval castle stood on the summit of the hill, dominating the region for twenty miles in every direction. West of the hill the crystal clear Mincio, taking its water from Lago de Garda, flowed swiftly on its way to the Po. An old Roman bridge spanned the Mincio, a fitting companion for the ruined castle high above. Many successive days the Amex troops marched through Valeggio. and up the hill, then down the other side past the bridge, across the Mincio to a level valley covered with mulberry and grape vine where realistic combat work was executed. To the east and south of the Valeggio camp site extended an almost unbroken level ; 12 kms. to the east was Villafranca ; 40 kms. to the south was Mantova (Mantua) ; Lago di Garda was 10 kms. northeast.

A heavy drill schedule began at once. Shade could be found nowhere; the sun's burning rays could not be avoided. The nights spent in the open tents under a boundless sky, glistening with bright stars, amply compensated for the scorching noonday heat.

FOR THE FIRST TIME since we were at Havre, the regiment was united. There were acres of tents in orderly rows forming company streets. A highway ran through the center of the camp separating Regimental Headquarters and the Auxiliary companies from the letter companies. Instead of the conservatory of a villa, we now had a tent for an office; instead of a soft bed and a roof over us at night, we had a tent and the earth. Most of us enjoyed this open air life more than the town life.

The ground occupied by the regiment was a mulberry grove. The peculiar looking, stunted mulberry trees were grown for the leaves upon which the silk worms feed. Silk was manufactured in Villa Franca and neighboring towns.

Vallegio is very hot and, on some days, the heat of the sun readily penetrated the canvas and seemed to be trying to dry the blood in our bodies. Yet, through it all, the boys drilled. How they stood it, God only knows. Of course, there were frequent rests but only American grit carried them through. War is what Sherman said it is, but the general thought was that it was not worse than drilling in Italy during August.

While the days were hot, the evenings were very pleasant and the nights were cool, so that one recuperated from the heat and labor of the day. 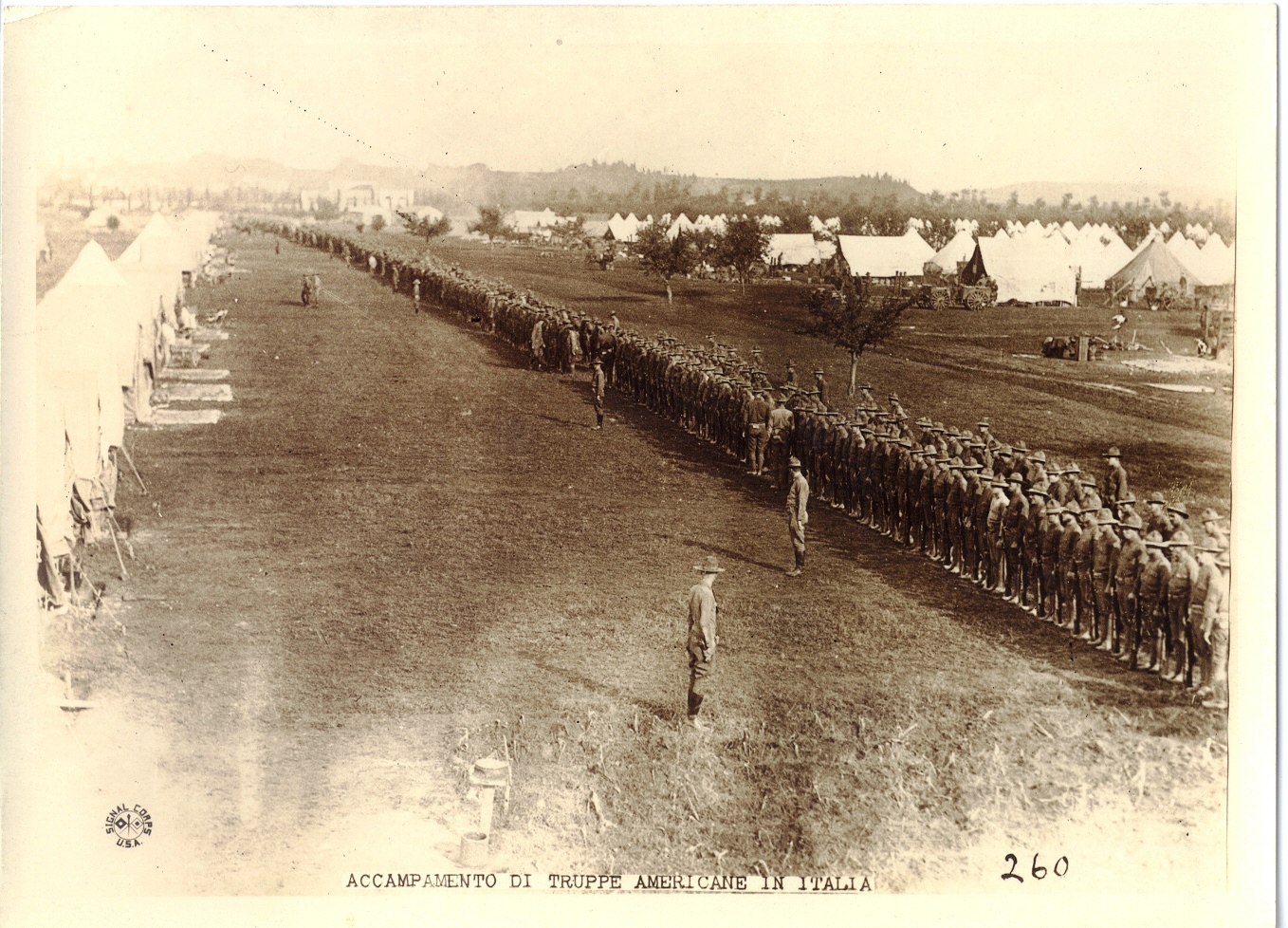 On the 13th of August we policed our billets thoroughly—I mean thoroughly, since Lieutenant White as in charge, and then hiked ten kilometers (six miles) to our new location just outside the walls of Valeggio, where the regiment camped in squad tents. In pitching tents we acquired great skill, since among the officers there was so much difference of opinion as to what constitutes a straight line. After striking and pitching tents fourteen times, they were allowed to stand at ease for the duration of our stay.
…
At Valeggio the life of dusty roads and crowded four-story quarters were at an end, replaced by the fresh air life in open fields. These conditions, together with a marked improvement in the mess, seemed to inspire the men to the pep and happy times at Camp Wallace. The busy life and boisterous time after drill hours gave the men the belief that they were the best physically of the A. E. F. ...

About this time our Colonel decided that I would be best for the regiment to be together as a unit, instead of split-up as we were, with each battalion in a different village. A large, flat stretch of ground was accordingly selected near the village of Valleggio, which was only a short distance from Custoza, and it was decided to assemble the entire command under canvas. This plan was not hailed at first with joy, by either men or officers, but after we moved over, which we did on August 15th, and laid out our camp, with a huge pyramidal ten for each squad and a wall tent for every two officers, we all settled down and enjoyed the situation. We were out of billets with their accompanying vermin of all kinds, and had ample room in the open, at the same time being comfortably housed under sanitary conditions, Many of our men have since expressed the opinion that our camp at Valleggio was the most satisfactory and comfortable of all the billets that we occupied during our entire campaign. It was a novel thing for the Italians, too, to see so large a unit as a regiment under canvas, and the citizens and soldiery came from miles around to see our neatly laid out camp with its wide company streets and canvas homes. …

Colonel Wallace was not satisfied with the regiment scattered aroun as it was difficult to give the proper training, so on August 13th we marched from Villa Franca and the other towns to a large field near Vallegio on the Mincio River, a distance of about 13 Kms. Here the regiment was all together. We were supplied with tents – squad tents for the troops – and after our march from Villa Franca, we proceeded to erect our tents. Never having had the experience of setting up such a camp, it was quite a laborious job and the results left much to be desired as to the regularity and proper alignment of the companies. When Colonel Wallace was the results, he expressed his displeasure in no uncertain terms and all tents had to be taken down except for “A” company, and then re-erected to be in line with that company. The writer will never forget how tired and discouraged we were when the order was given, be we realized later how important it was to make a good appearance for we would be looked over by the Italian and Allied officers with critical eyes, being the on U.S. troops on the Italian Front.

Sixteen days and we pulled up stakes,
From the billets a hike to take;
Six miles away in a big open field,
Pitched squad tents and good it did feel.

Tents must be in a very straight line,
Worked at it hard for a good long time;
All up crooked, a mess the claim,
That’s what they said, ‘twas a shame, ‘twas a shame.

Early next morn we did it all over,
Tents pulled down, and bunched a little closer,
Sighted with eyes, and lined with rope,
Chased us around like slippery soap.

History of Company E, 332nd Infantry from Departure Overseas to Return and Discharge. Place of publication not identified: publisher not identified, 1919. Print.

An American woman, Virginia Lee, operated a Posto di Conforto in Treviso, Italy, caring for traveling, sick, and wounded soldiers, mainly Italy's. She was a journalist and the former Society Editor for Town & Country magazine. She continued to write for the magazine sending dispatches describing her experiences in wartime Italy. On one occasion she traveled to Valeggio to visit Camp Wallace. Her impressions of the 332nd Infantry, Colonel Wallace and what she saw and whom else she encountered were published in the November 1, 1918 edition of T&C: 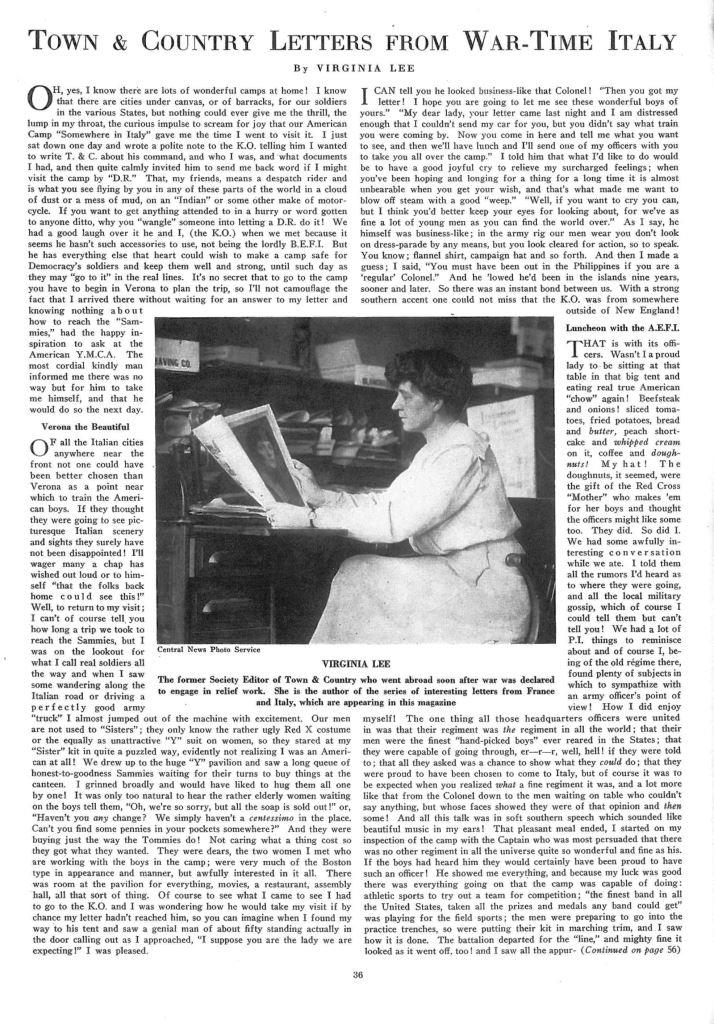 Right Click on image and select "View Image"  to enlarge 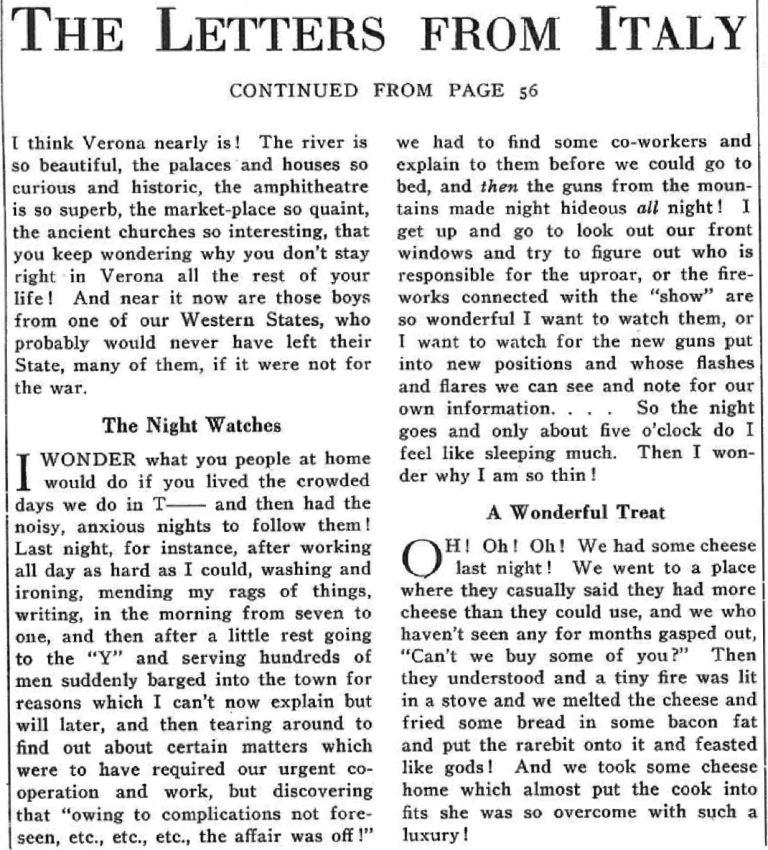