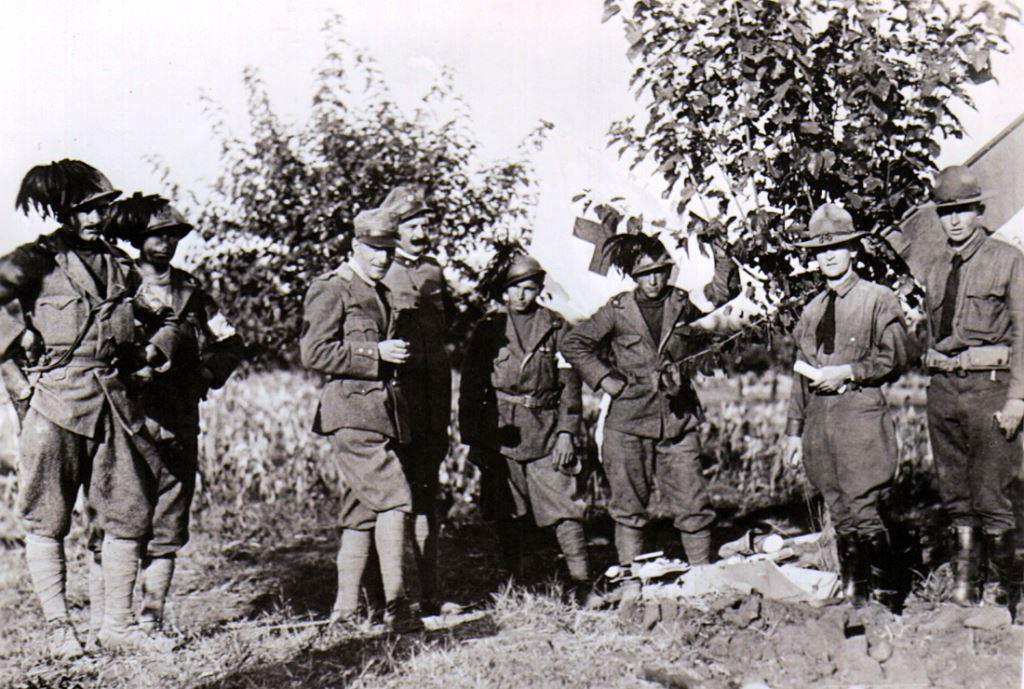 To assist us in our training, Colonel Wallace requested and received from the Italians, the 23rd Assault Bn, of the Ardite, Italy’s finest shock troops, and at their head was Major Alligretti. These Ardite were so tough that it was rumored that many of them had come from Italian penitentiaries. In addition to their rifles and grenades, they all had a dagger strapped to their belts and in the handle was a needle like instrument for the purpose, so it was said, to gouge out the eyes of the captured enemy. This battalion had their own small band and I can see them yet, early in the morning running to the training field at double time, the band playing all the while. 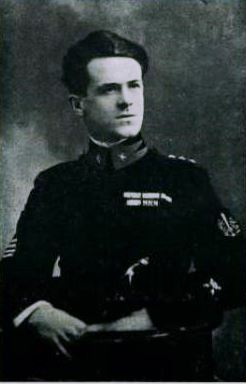 The [Italian XXIII Assault] battalion is headquartered at Quaderni [a villiage in the Provence of Verona between Villafranca and Valeggio], was called upom by [Italy’s] Commando Supremo to train the American 332nd Infantry Regiment, under the command of Colonel Wallace, a famous veteran of the Cuban campaign, that is encamped in Valeggio. Every morning, in turn, two of our companies went, with the band in the lead, to the Hill of Olives on the Mincio to carry out a training exercise, with much shooting and a lot of maneuvering, on the superb training field that was set up by Austrian prisoners in accordance with our guidelines. The demonstration was to assist the American soldiers, who lined up astonished and attentive, in a spacious walkway around the field. When our presentation was over the Arditi departed, leaving a team that promptly makes a "clean field" so that there remain no unexploded bombs. Major Allegretti, through interpreters, explained the tactical theme to the American officers and, with further explanations, identified every detail during the course of exercise. Finally, the American troops were asked to put into practice what they saw. But it all comes down to just a modest advance, under the hypothetical enemy’s barbed wire, a bit of gunfire and the launch of a few bombs. Of course, we laugh at the excessive prudence of our good allies. 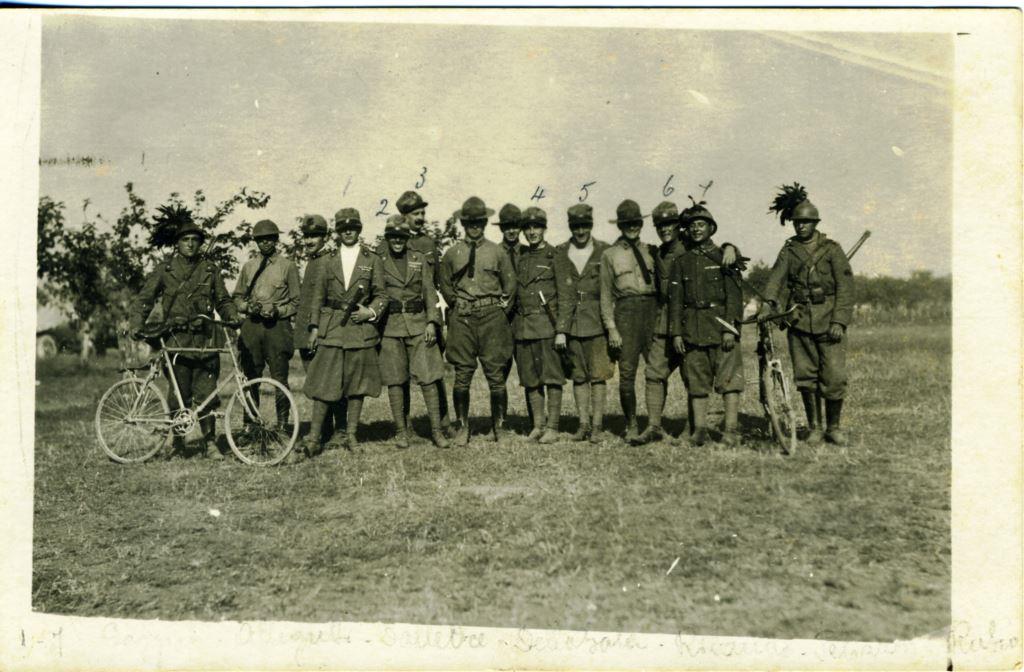 The Arditi with the 332nd Infantry
#2 Major Alligretti -- #3 Major Dr. Dalle Ore, aka Sandrone – #5 Chaplain Ribaldo
[right click on image and select "View Image" to enlarge ]Good comrades, after all, these Americans! They have a very high notion of our worth, and it makes for a lot of good; my Arditi never fail to get cigarettes and even money. During instruction they are quite capable of challenging death to move closer to the bomb explosion, to intentionally incur a minor injury .... a scratch, somewhere a splinter, since they had previously observed that it was usual that some five Lire bills were given as an act of consolation to each of the men who were truly accidentally slightly injured.

In this regard, one day I discovered one of my [soldier’s] .... deliberate heroic act! A daredevil, having been unable to get a genuine splinter, slightly wounded himself with the tip of his knife and jammed into the wound a piece of metal he picked up on the field. I would have been misled, and naively given him a coin and praise, if I had not been tipped off by a chorus of thunderous laughter by some Bersaglieri who had seen the deception. Things from the other world come to us with these good children! 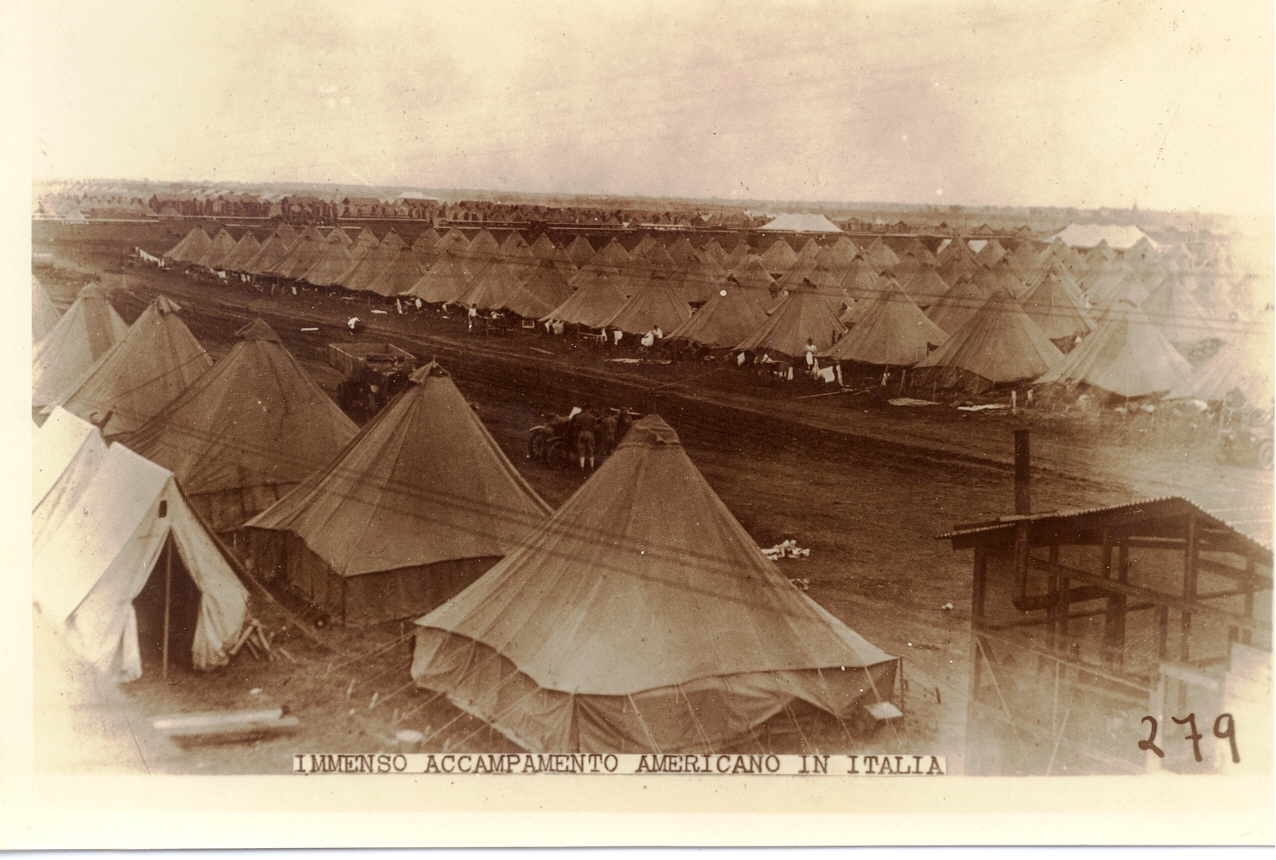 Every evening, when the trumpet signals the end of the day, my Arditi, handsome in their striking uniforms, go on foot towards Valeggio and to the picturesque array of American tents, large and aligned.

In the evening, someone who has quaffed abundantly to the new brotherhood, falls into the clutches of a patrol and goes to sober up in the slammer.

One evening I was invited by Colonel Wallace, along with Dr. Sandrone and Chaplain Ribaldo, to dinner at their Camp at Valeggio. Only the chaplain, who had a few weeks ago bought an Italian-English conversation manual, knew a few phrases; Sandrone and I, more than the good-bye ritual did not known how to utter much English. There was a very cordial presentation and reception: we sat outside, where many smoked big cigars, exchanging pleasantries thanks to the interpreters of the contingent. After a while, we set off to the mess hall that was located in a beautiful and huge tent decorated with Allied flags. We sat among our American colleagues and I, disappointed at not being able to exchange a word with them, at least allowed myself the illusion of being able to think ....... in Italian with dinner. The many glasses were filled with different liquids and I immediately felt embarrassed by the serious problem of which I begin with? And what are these delicacies that are brought to me before the soup? And these sauces?

Sandrone, who was nearby, looked curiously at everything and said, "What is this stuff? Oh Jesus, I don’t understand! I will watch the others!”

Ribaudo understood and translated Sandrone’s problems to the Americans; everyone laughed and then Sandrone, as if he could make himself understood, beginning in his happy Venetian dialect, nurtured and embellished with hilarious quips brought on by new embarrassments with unexpected culinary matters of the menu .... and especially supported by frequently repeated libations with each new toast and every new topic. Those many soups, sauces, foods, more or less tasty, that at first triggered our confusion, we soon decided to follow in our own way the needs and instincts of the palate; we dove headlong into the food. 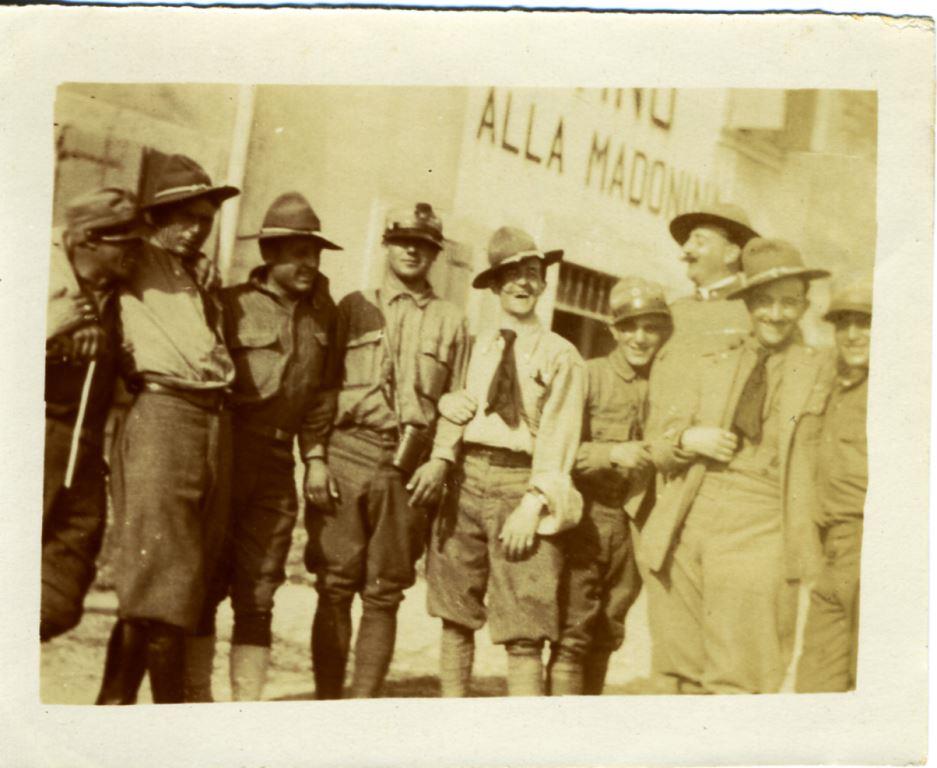 332nd Infantry's doughboys sharing a good time
with Italy's ArditiSandrone, after a certain number of tubes .... (as he cheerfully called his capacious glasses) he was in perfect agreement with the American Major doctor; exchanged extravagant expressions of mutual affection and esteem, in Venetian dialect and English, to our great hilarity!

The two doctors raised their glasses to the health of their homelands, of the armies of the Allies, of their colleagues, of the beautiful women and once the glasses were suddenly emptied, here are the two sons of Aesculapius cheerfully hugging and kissing, shedding tears of tenderness and swearing eternal friendship.

Late in the evening, our commander’s buggy took us back to Quaderni.

The next day, with colleagues at the mess, there was nothing to talk about but the beautiful evening spent at the American camp. Sandrone made everyone laugh like crazy telling of his embarrassment at the table, with all those exotically composed and aromatic dishes. He concluded: “Guys, the doctor major wants me to marry his daughter, who also has a lot of money; poor man, was a bit drunk. He did not understand anything anymore”.

Instead, our big delightful Sandrone was very drunk.

September 25, 1918 - This morning at the regular training exercise at Colle Olivi [Borghetto sul Mincio training grounds where the Italian XXIII Assault Battalion (Bersaglieri-Arditi) instructed the 332nd Infantry in combat methods used on the Italian Front], a serious misfortune happened that has highlighted the toughness of the heroes of which compose the Assault Battalion. After the combat exercise with the usual inferno of bombs, machine guns and flamethrowers, the usual team of Arditi for cleaning the training field remained so that the Americans could maneuver without danger. Suddenly, I saw a soldier come running; he was the Bersagliere Di Castro, of my company, waving a horrible and bloody stump! An unexploded bomb, had suddenly detonated, perhaps inadvertently bumped or moved by a slight gust of wind; and it had completely removed the right hand of my Bersagliere. Major Allegretti broke away from the group of officers, and saw Di Castro’s dismemberment, asking him caringly: "But, what have you done?”.

Meanwhile, our doctor [Major Alessandro Dalle Ore, aka Sandrone], Colonel Wallace and other American officers hurried over, curious, silent, looked on with astonishment and were deeply affected. My Bersagliere presented the stump to the doctor and said proudly: "I am only disappointed because I lost my hand here, instead of in combat! Please give me a cigarette!".

The officers, upon hearing the translated words of the brave soldier, broke out into exclamations of enthusiasm and wonder. They, simply by the heroic words of our Ardito, found him worthy of a greater reward. In a few moments Colonel Wallace proposed a collection, gathered over 2,000 Lire, and asked Major Allegretti to send the money to the heroic Ardito’s family. Afterwards, he was admitted to the American military hospital near Custoza [the 331st Field Hospital], where he was treated with special reverence.

My company has lost a hero. 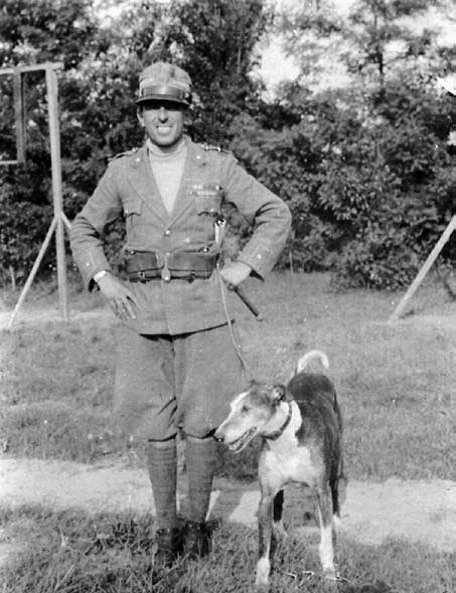 Major Lorenzo Alligretti
Commander of XXIII Reparto d'AssaltoThe Americans have completed their training and the 332nd Regiment is about to leave. A few days ago we invited our fellow allies and officers of the delegation to a lavish farewell banquet that featured an outstanding musical program performed by our intrepid band. We even performed Americans hymns; we frantically looked for them in all music stores in Verona and then we taught them, with a lot of patience .... a lot of rigorous detention for the less studious.

The guests, including two kind ladies of the American Red Cross, were presented with a Bersagliere plume of feathers and a Fez that were received with the greatest pleasure.

The toasting was never ending. Sandrone and his great friend, the American Major of the medical corps, hugged again, drank another glass of wine to the health and glory of all, they wept like fountains, pledged eternal friendship and said goodbye.