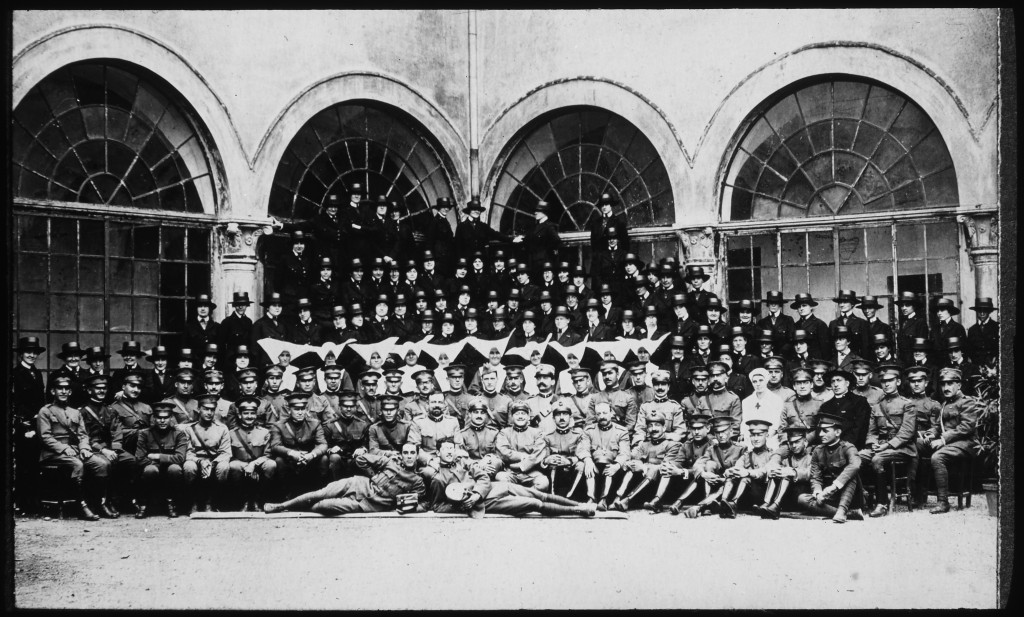 World War I - U.S. Army Base Hospital No. 102: Nurses, Officers & Sisters in Courtyard of the Hospital (formerly the Rossi Industrial School), Vicenza, Italy

When the United States entered World War I in April of 1917, hospitals served by the Daughters of Charity were quick to join the war effort. Along with about 100 nurses recruited from Daughters’ hospitals nationwide, ten sisters went off to serve in the American Expeditionary Forces. These Daughters, from what was then the Western Province centered in St. Louis, were under the leadership of Sister Chrysostom Moynahan, Chief Nurse. Together with the civilian nurses and U.S. Army doctors and nurses, they formed the staff of Base Hospital #102 in Vicenza, Italy, the hospital unit operating closest to the nearby Italian Front. Called the Loyola Unit, the group had been formed by Dr. Joseph A. Danna of Loyola University Medical School in New Orleans and an Italian-born U.S. citizen. Base Hospital #102  was attached to the Italian Army treating its soldiers but it, also, received injured or sick men from the  332nd Regiment from Ohio, the other U.S. military units and those of the Allies.

For more information about the U.S. Army Base Hospital No. 102, visit the following sites:

Records of Daughters of Charity Service in World War I, RG 7-5-6

There were 15 Units of the U.S. Army Ambulance Service assigned to the Italian Army but ambulances from Units 526, 532 and 587 served the 332nd Infantry Regiment during the Italian Campaign.  While the 2nd Battalion of the 332nd U.S. Infantry Regiment was on dutiy at Cattaro, Dalmatia, on the boundary of Montenegro, from November 1918 to April 1919, it was served by the "Balkan Contingent", a select group of ambulance drivers and mechanics from the Italian Contingent of the U.S. Army Ambulance Service .

Pilots of the U.S. Army Air Service assigned to Italy in WWI were under the command of Captain Fiorello LaGuardia and trained at the Italian facilities near Foggia, Italy.

More about the U.S, Army Air Service in WWI Italy

Read about U.S. Navy aviation in Italy during WWI in the article Documenting the First Modern War 100 Years Ago on the U.S. World War One Centennial Commission's website.