It is in the spirit of these words—“Lest We Forget”—that the World War I Centennial Commission and the Pritzker Military Museum & Library jointly launch the 100 Cities/100 Memorials initiative as its first sponsors, with support from The American Legion and the Veterans of Foreign Wars. 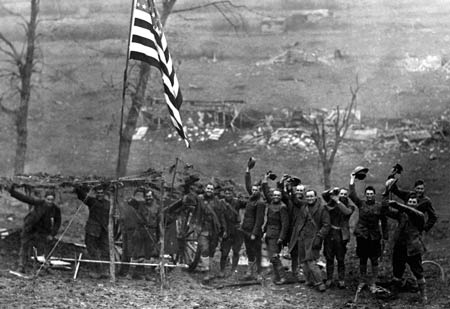 In observance of the upcoming centennial of World War I, a total of 100 matching grants of up to $2,000 apiece will be awarded for the restoration of 100 World War I Memorials across the United States. The first 50 of these were announced on September 27, 2017 and the second 50 will come from ROUND #2 of the matching grant challenge.

Any municipal government, individual, or organization may apply. Likewise, any individual, organization or company can become a sponsor of this effort, as the more we can raise toward this program, the greater the amount of the matching grant to the winning memorials.

A century ago, the founders of the American Legion wrote in their charter,

“The sacred purpose of the American Legion is to preserve the memories and incidents of their associations in the Great War.”
Founders: American Legion

This sentiment mirrors the commitment of the World War One Centennial Commission and the Pritzker Military Museum & Library to encourage the restoration and maintenance of World War I monuments across the country.

By restoring these monuments and memorials, many of which bear the names of those members of the community who served and fell in the Great War, the sponsors of the 100 Cities/100 Memorials initiative hope not only to honor the names of those who served, but to raise awareness of this momentous event in our nation’s history, and increase each and every communities’ understanding of their towns’ and cities’ place in military history.

It is our great hope that the 100 Cities/100 Memorials initiative will help unite the nation in a collective celebration of our victory in World War I and in proper recognition of the contributions of those who served and those who made the ultimate sacrifice in defense of liberty and freedom.