Alabama's Response(s) to U.S. Entry into World War I 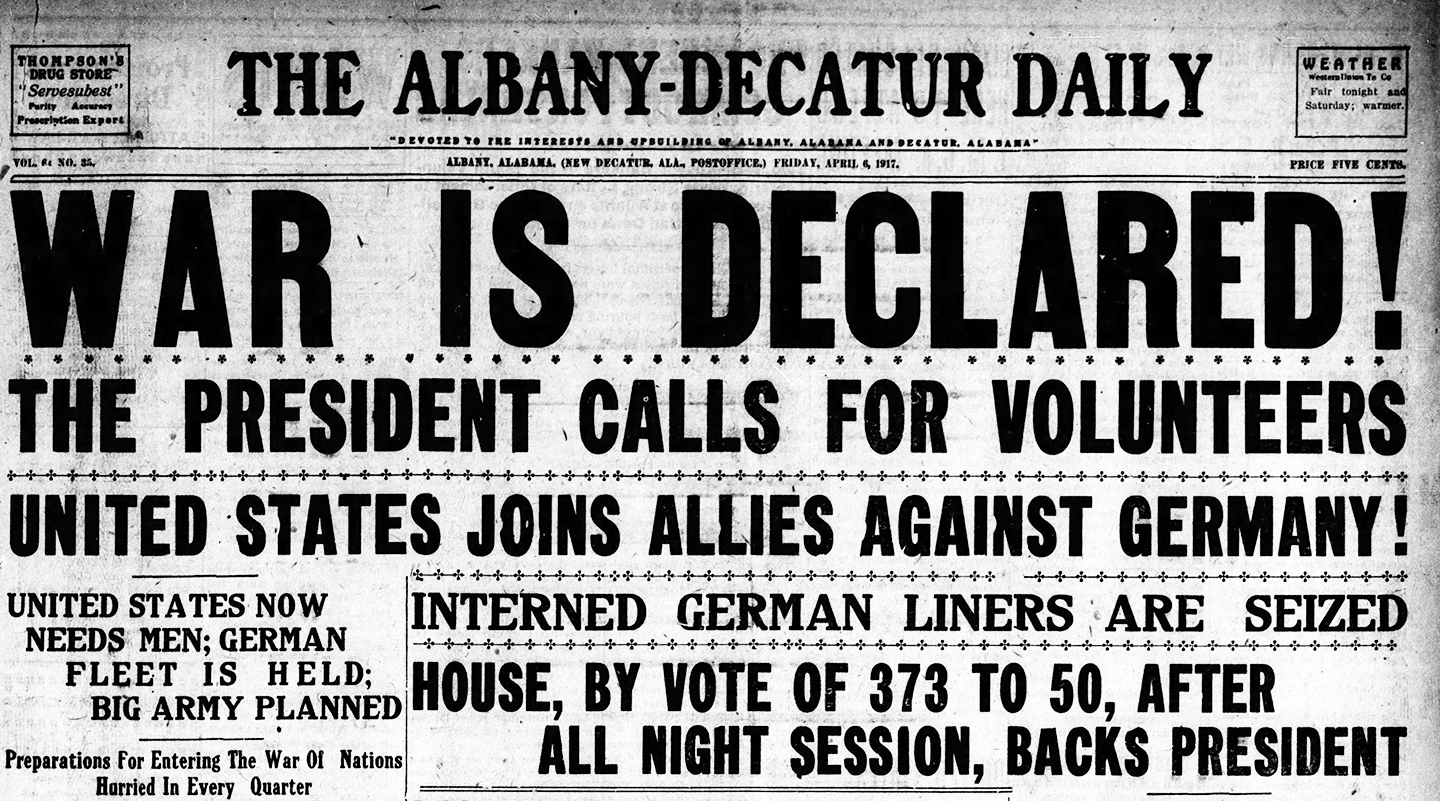 At the beginning of the war in 1914, most Americans supported the idea of staying out of the conflict, though U.S. businesses and manufacturers continued commerce with warring countries, providing munitions, food, and loans, primarily to the Allied side. In an August 1914 speech, President Woodrow Wilson issued a declaration of neutrality, saying, “The United States must be neutral in fact, as well as in name, during these days that are to try men’s souls. We must be impartial in thought, as well as action, must put a curb upon our sentiments, as well as upon every transaction that might be construed as a preference of one party to the struggle before another.” Wilson was reelected in 1916 on his “He Kept Us Out of War” slogan.

By 1917, Germany’s decision to resume unrestricted submarine warfare and the interception of the Zimmermann Telegram angered and worried many Americans. On April 2nd, President Wilson addressed Congress asking that war be declared against Germany. In his speech, Wilson said “The world must be made safe for democracy.” Four days later on April 6, 1917, Congress voted overwhelmingly in favor of a war declaration. Among Alabama’s delegation, only two – Representatives John Burnett and Edward Almon – voted against U.S. entry into the war.

For some though, the idea of entering a war in Europe was frightening and not in the best interest of the country. On April 8, 1917, Alabamian Helen Keller wrote in a letter to a friend in Montgomery, “I was grieving over the fearful world tragedy that fills all thinking minds and good hearts with woe.” In May 1917, a “Petition Against Sending Our Young Men to War in Europe” signed by 112 citizens was sent to Senator John H. Bankhead in Washington, D.C. The signers advocated "absolute neutrality" regarding the war in Europe, and suggested that it would be unconstitutional for the federal government to call for troops or enact conscription legislation. 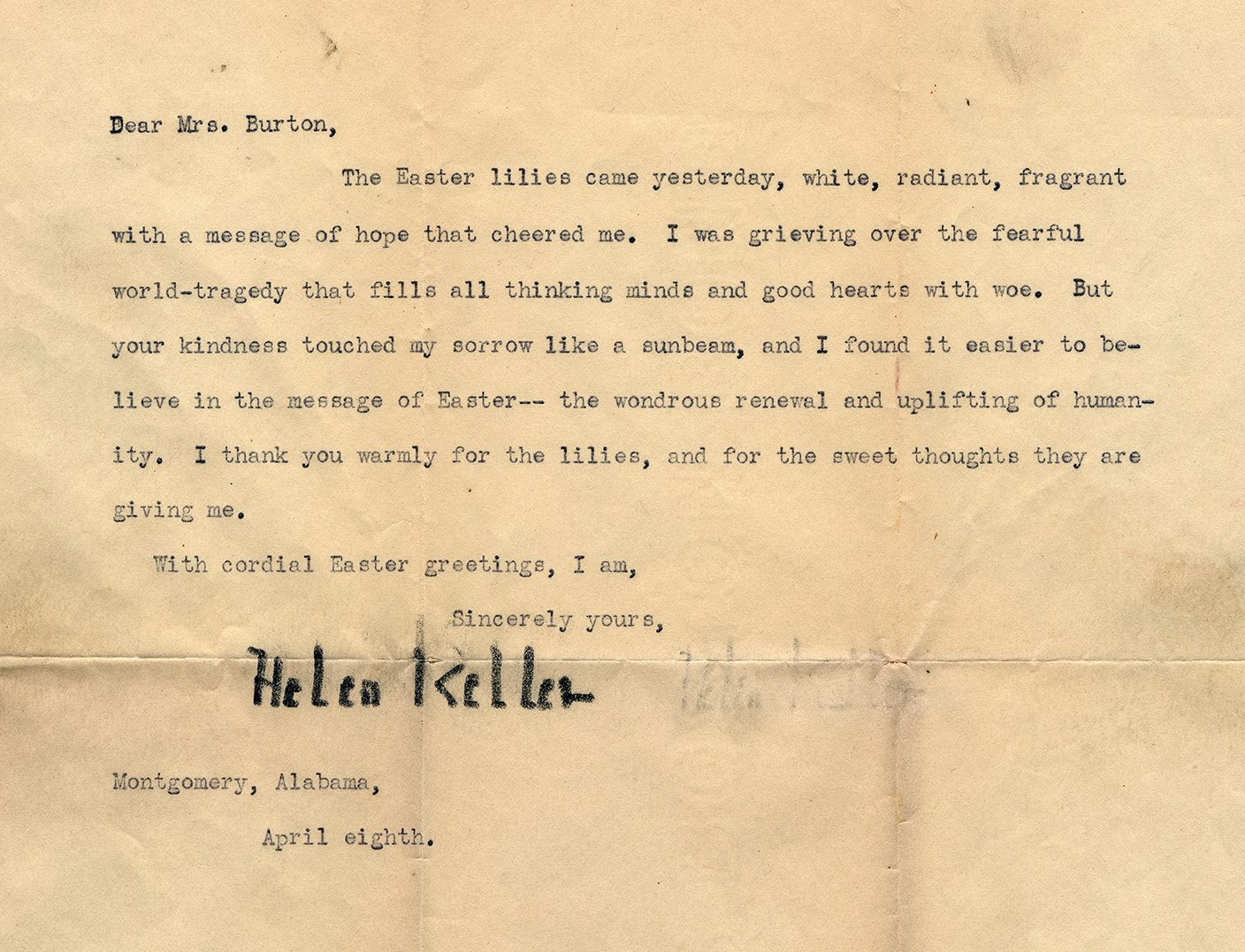 "Petition Against Sending Our Young Men to Europe," May 10, 1917. Alabama Dept. of Archives and History

Overall, Alabamians fully participated in mobilizing and fighting America's first "total war" of the twentieth century. Military mobilization engaged Alabama almost immediately after the U.S. declaration of war. In addition to providing 5,000 National Guardsmen and 7,000 other volunteers, Alabama contributed approximately 74,000 white and black draftees, called "selectmen," to the army. More than 2,500 Alabamians were killed fighting in the fields of France. Alabamians from all walks of life pitched in to help the war effort at home. Many joined voluntary organizations such as the Red Cross and the Women's Committee of the Council of National Defense. Local communities, professors from Alabama State Normal School for Negroes, and women's clubs in Montgomery and Tuscaloosa organized canning factories to preserve Victory Garden produce and keep food affordable in their cities. 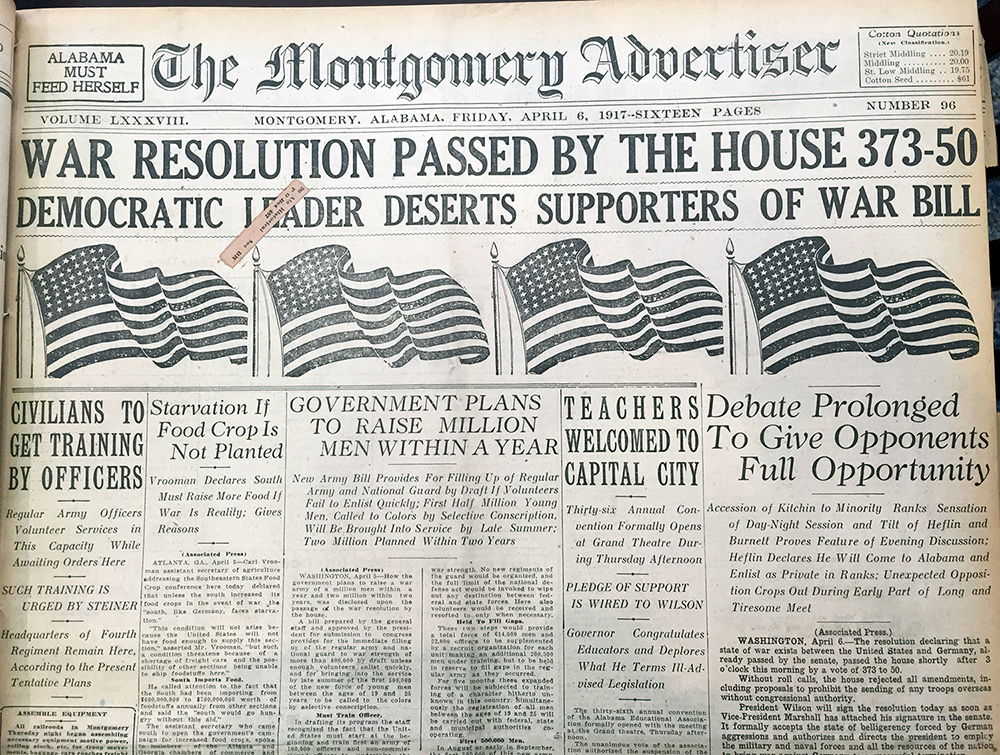 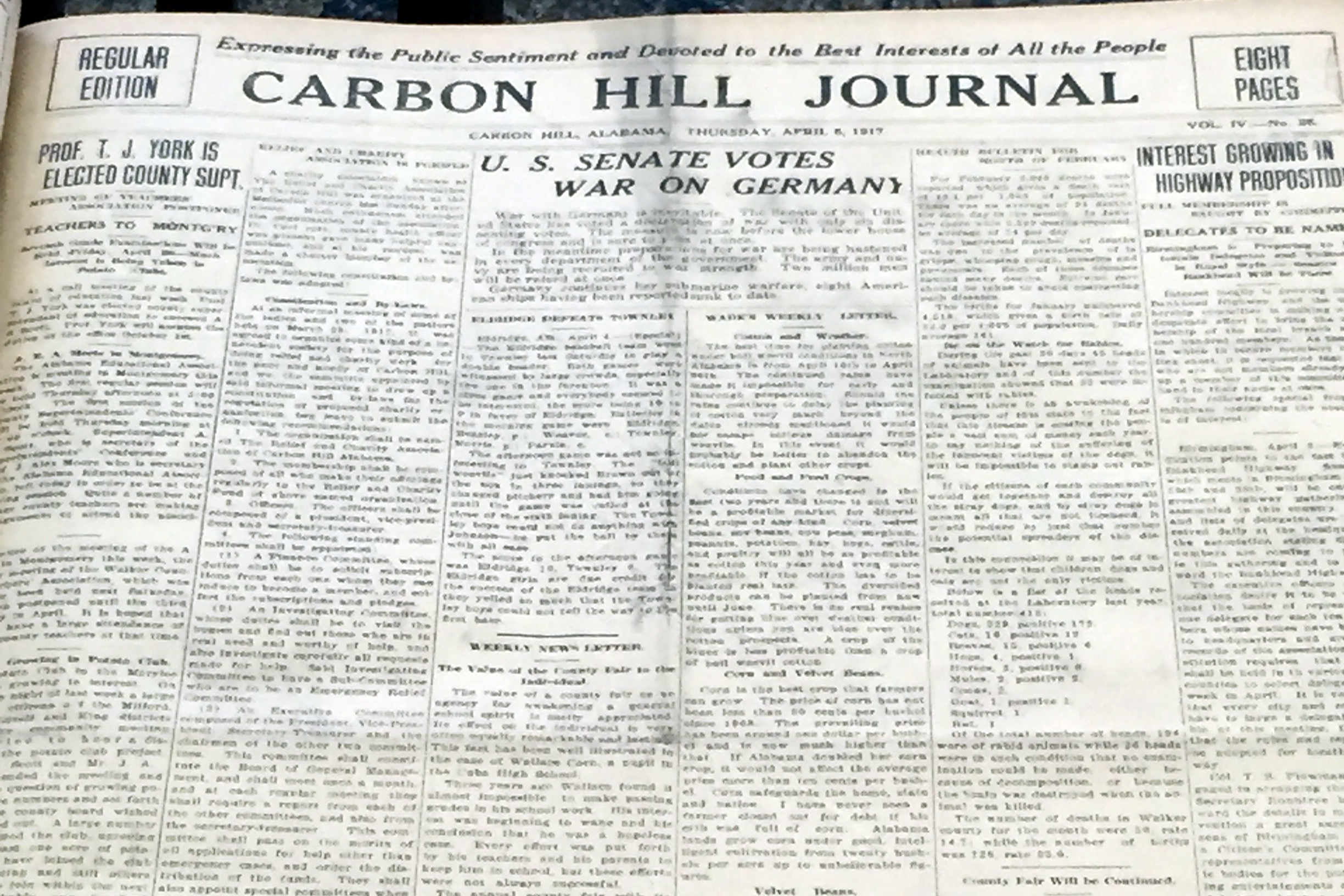 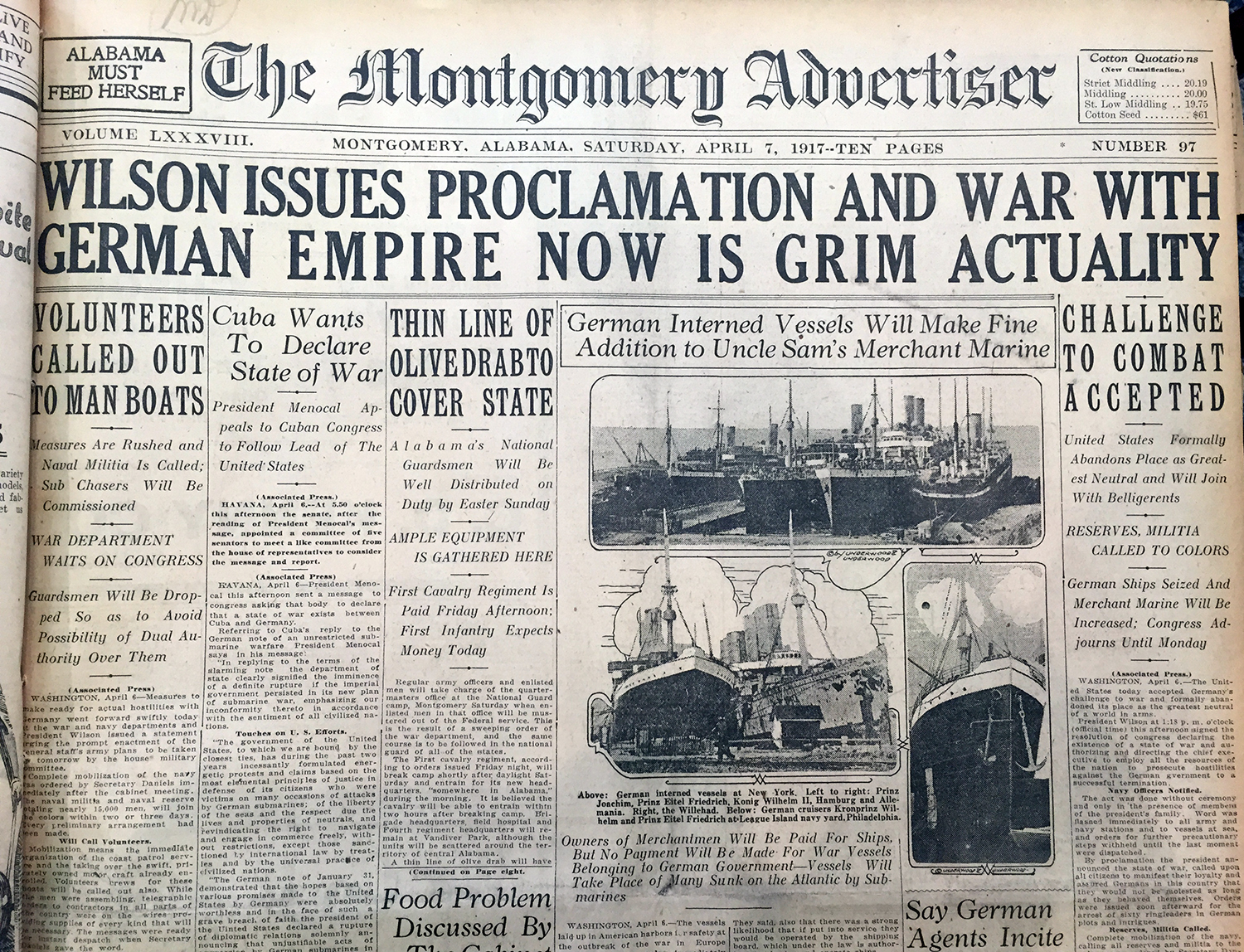 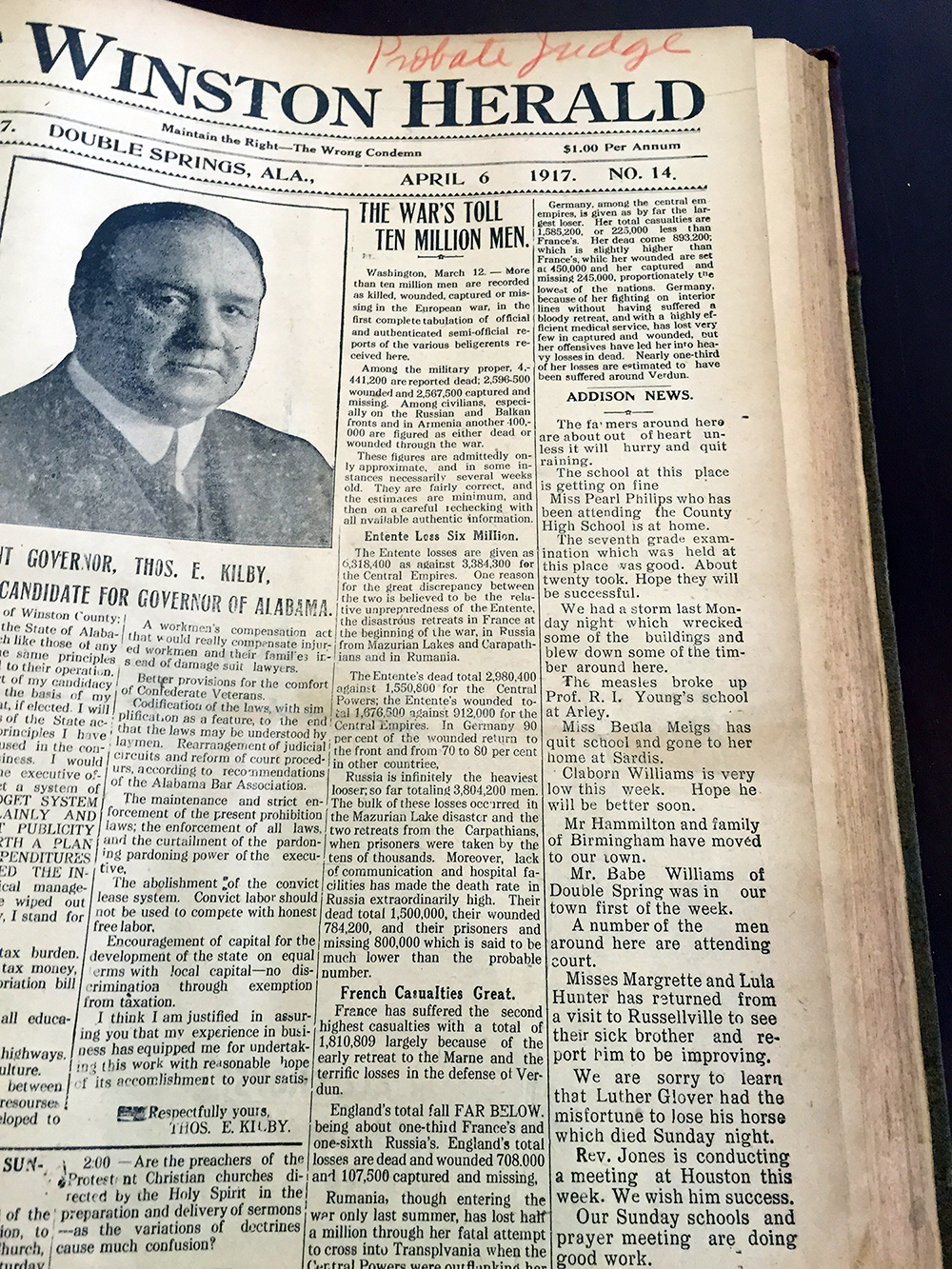 The Winston Herald, April 6, 1917. Alabama Department of Archives and History 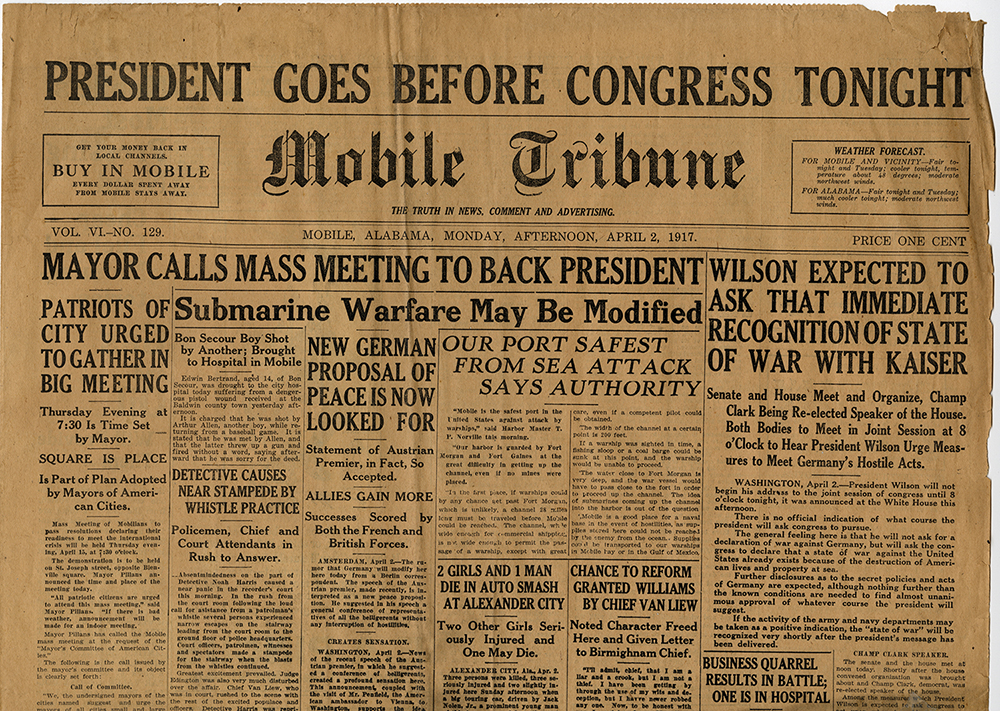