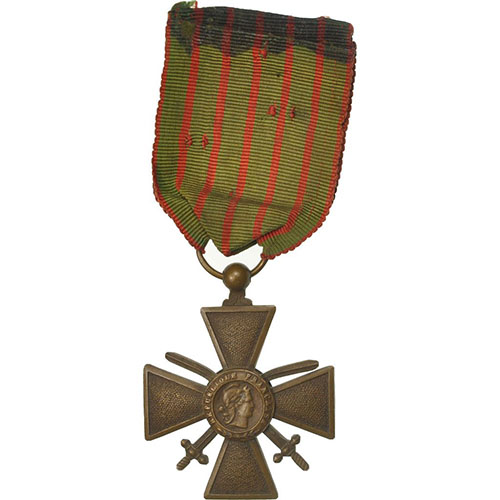 The French Croix de Guerre was awarded to French and allied soldiers, including 11,589 Americans, for their service during World War I and was authorized by French legislation on April 2, 1915. The Croix de Guerre was a medal with ribbon that was awarded with degrees based on the actions of the soldier and his role. The lowest degree was signified by the bronze star, while the highest was a bronze palm. Soldiers could receive multiple stars and palms for multiple acts of wartime gallantry. In some instances, whole military units and even French villages were awarded Croix de Guerres.

Private First Class Peter Oliver Barnaby (Flathead) fought with the 1st Division, 26th Infantry, Company I and was awarded a Croix de Guerre for his bravery in the Meuse-Argonne Offensive.

Sergeant James M. Gordon (Red Cliff Band of Lake Superior Chippewa) from Bayfield, Wisconsin, served in the 86th Division, 341st Infantry, Company G, where he received a Croix de Guerre when he rescued a French second lieutenant who was wounded in an inspection tour. Gordon was the driver of a motorcycle with side car when the officer was wounded. Gordon managed to get him to safety while being fired upon.

Private Joseph Isaac (Ottawa) of the 32nd Division, 125th Infantry, Company M was awarded the Croix de Guerre with Bronze Star for his actions on July 31, 1918. “During the passage of the Ourcq near Sergy on July 31, 1918, although wounded, he displayed great courage in crawling into our lines carrying a wounded comrade on his back.” Additionally, he was awarded the Distinguished Service Cross and Purple Heart with Oak Leaf Cluster. He was wounded in the head and crawled approximately 150 yards through gunfire with his fellow soldier on his back.

Joseph Oklahombi (Choctaw) was a Private First Class in the 36th Division, 141st Infantry, Company D, and served as a Code Talker. Additionally, he was a recipient of a Croix de Guerre and a Silver Star with Victory Ribbon. His citation for the Croix de Guerre reads, “Under a violent barrage, dashed to the attack of an enemy position, covering about 200 yards through barbed wire entanglements. He rushed on Machine Gun Nests, capturing 171 prisoners. He stormed a strongly held position containing more than 50 Machine Gun Mortars. Turned the captured gun on the enemy, and held said position for four days, in spite of a constant barrage of large projectiles and of gas shells. Crossed ‘No man’s land’ many times to get information, concerning the enemy, and to assist his wounded comrades.” While Oklahombi did have help from about 20 other soldiers, his actions were meritorious, and many feel he should have been awarded a Congressional Medal of Honor as well.

Corporal Thomas D. Saunders (Northern Cheyenne) served in the 2nd Division, 2nd Engineers, Company A. At the Battle of St. Etienne-a-Arnes, he led a patrol under heavy fire on October 8, 1918, where he served with “alertness, coolness, and dependability, backed by fearlessness” according to his commanding officer.

Many other American Indians were awarded French Croix de Guerres for their bravery and courage during the frontline fighting on French soil. The French government awarded the Croix de Guerres to the Choctaw Nation and Comanche Nation in honor of the Code Talkers who helped to turn the tide of war and, ultimately, save France from total devastation.

The Belgian Croix de Guerre was established by royal decree of the Kingdom of Belgium on October 25, 1915. It was awarded for bravery and other military virtue displayed on the battlefield to Belgian and allied soldiers, including 469 Americans. Calvin Atchavit (Comanche) received a Belgian Croix de Guerre for his bravery in the Battle of St. Mihiel.