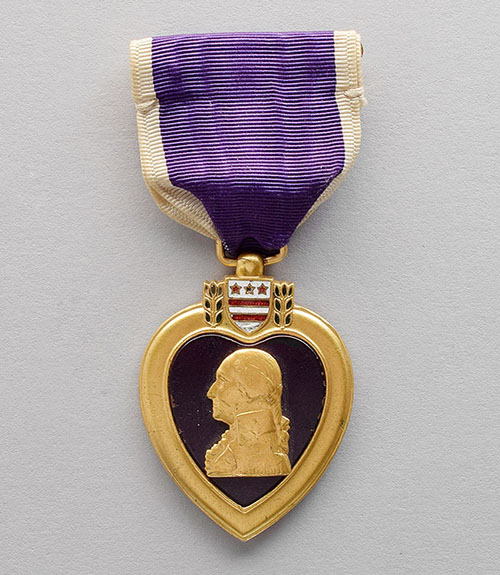 The Purple Heart was the successor to the Badge of Military Merit. It was revived on February 22, 1932, the 200th anniversary of George Washington’s birth. The medal is awarded to those wounded or killed in action on or after April 5, 1917, in any branch of the U.S. Armed Forces. Any soldier who had been given the Meritorious Service Citation Certificate, Army Wound Ribbon, or a Wound Chevron during World War I was authorized to request a Purple Heart.

Private Sam Beaver [Muskogee (Creek)] served with the 2nd Division, 23rd Infantry, Company B as a rifleman during his regiment’s attack at the village of Landres-et-Saint-Georges, France, on November 1, 1918. He was killed in action and is now buried in the American Cemetery at Meuse-Argonne. He received a Purple Heart.

Private Gilbert Pahdi Conwoop (Comanche) served with the 90th Division, 357th Infantry, Company A, where he fought in the Meuse-Argonne Offensive. He was severely wounded in action in the arm on October 25, 1918, and was awarded a Purple Heart.

Private Leonard Forrest Vanderhoop (Wampanoag) served with the 77th Division, 306th Field Artillery, Battery B. He received a shrapnel wound in his lower left leg for which he was awarded a Purple Heart.