Carlisle Indian Industrial School was founded in 1879 in Carlisle, Pennsylvania, by Civil War veteran General Richard Henry Pratt as the first off-reservation boarding school for American Indians. His motto “Kill the Indian, Save the Man” was the rule by which American Indian students were educated. In addition to the 3 R’s (reading, writing, and arithmetic), many students learned trades and musical instruments. They were required to wear uniforms and learned to drill in military fashion, which made them desirable for recruitment into the armed services.

Just over 200 former Carlisle students have been identified to date as serving in the military during World War I. Of these students, many earned non-commissioned officer status due to their military training received at Carlisle and their education.

Carlisle was very proud of the students who served during the war and reported on war activities in every issue of the weekly school publication Carlisle Arrow and under its new name The Carlisle Arrow and Red Man. Recurring columns included “Red Cross Notes,” “Soldiers’ Letters,” and “Extracts from Home Letters.” The lengthier monthly publication from the first of each month included longer essays on how to become involved with the war; “The Second Liberty Loan” written by Secretary of the Treasury William G. McAdoo encouraged the buying of liberty loans for the success of the war. “Why the Red Man Fights for Democracy” by Arthur C. Parker argued that Indians were citizens of the world fighting for freedom. Under “General News Notes,” tidbits about the students who served and were involved in war relief efforts appeared under that column. Examples include “William Goode, who joined the Navy, is at Great Lakes, Ill.” or “Ned French and James Cajune showed their patriotism by attending the Red Cross meeting. They helped to cut bandages.”

The school closed on September 1, 1918, and was transferred to the U.S. Army, where it was used as Base Hospital 31 to help rehabilitate soldiers wounded during the war. An estimated 10,000 American Indian and Alaska Native students attended Carlisle during its years of operation.

“I am more than thankful that I was once a student of Carlisle because I learned how to drill with a gun and many other things that are helpful to one in the Army. I joined the Oklahoma State Militia on April 1st, and am now stationed at Fort Sill, Okla., Company D, First Oklahoma Infantry. There are two other boys here in the army that were students of Carlisle.  They are William Nephew and Jonas Powesheik.” Herbert A. Pappin (Osage)

“I like soldier life very much. It reminds me of school, only the drilling is longer, but I surely like it, and I am going to stand by the flag as long as my feet will hold me. I know I am doing my duty to our Stars and Stripes and I am going to do so as long as I am able.” Thomas Pickett (Crow)

“I was glad to hear that the old school was still running the old flag up with the same Carlisle spirit as of old, the news being obtained through the special Arrow for the Carlisle boys now serving in the Army or Navy. I was sure surprised to see such a large percentage in the service. It certainly shows what Carlisle is capable of doing towards her country.” Earl James Wilber (Menominee)

Chilocco Indian Agricultural School began in January 1884 as an Indian boarding school modeled after Pratt’s Carlisle model. It was, however, mostly focused on agricultural education given its location north of Ponca City, Oklahoma. The education received was academic with an emphasis on vocational training. It, too, like its counterparts at Haskell and Carlisle had a military education for the boys who were accustomed to wearing uniforms and hearing bugle calls throughout the day.

Almost 100 former Chilocco students have been identified as being World War I servicemen. The school publication Indian School Journal had a weekly issue and a longer monthly issue that all reported on the war relief efforts and the service of their former students. Columns such as “Red Cross Work at Chilocco” and “The Indian and the War: News and comment regarding the Indian and the part he is playing in defending democracy” were recurring and shared what was happening both at the school and in the armed forces with their former students.

Chilocco remained open as a high school until 1980.

“I am making good in the Army.  I am now a first-class private, drawing $36.00 per month.  I expect to be made corporal in the near future.  Our company commander says I have the right spirit.  Chilocco has the credit for it.” William Baldridge (Cherokee)

“I am here at San Diego.  I left Goat Island on the 1st of September.  I am very glad to say that I like the Navy life alright and I am very proud of what I learned when I was at Chilocco.  It has done me more than good and I sure thank Chilocco very much for the training I received.” John Allard

Haskell Institute was one of the off-reservation boarding schools modeled after Carlisle. It was established in 1884 in Lawrence, Kansas, as the United States Indian Industrial Training School, but in 1887, the name was changed to Haskell Institute after Dudley Haskell, a U.S. Representative from Kansas, who was responsible for having the school located in Lawrence. The boys received the same military structured education as at Carlisle along with trades like blacksmithing, harness making, and farming. The trade education also served the former students in the military, as many became blacksmiths on Navy ships.

To date, about 400 students who attended Haskell have been identified as serving in the U.S. military during World War I. Haskell, like Carlisle, was also proud of its students for their service. The war news was reported regularly in the weekly school publication The Indian Leader. The weekly issues were usually four or eight pages long, while the monthly issue could be twenty-four pages or longer. Each weekly issue had a recurring column titled “History in the Making,” which featured a daily timeline of happenings during the war. It was geared toward educators interested in teaching current events. Other columns included reports from other Indian boarding schools like Hampton Institute in Virginia and Chemawa in Oregon. Under “Notes of Interest,” news of Haskell’s former students would be printed like this notice from the December 7, 1917 issue: “William Murdock and LaFront King have enlisted in the Radio Service, but will remain at Haskell until they are called to the colors.” 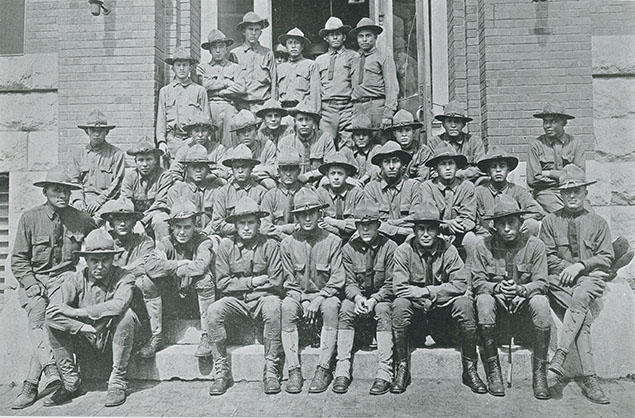 “My greatest disappointment is the fact that I could not get to go across, but on account of my previous knowledge of drilling acquired at Haskell I was retained here. I rose to the rank of first-class petty officer inside of five months and have now got the chance of being chief petty officer, but shall decline that as the expense for procuring uniforms for the position would not compensate me the short time I would remain in service.” John Joseph Jollie (Turtle Mountain Chippewa)

“The boys from Haskell have done their share of service over here, and Haskell can well be proud of her sons. I don’t think there was one that did not live up to Haskell’s reputation, for they are all well thought of wherever they happen to be stationed.” Luther Clements (Mechoopda)

“I was here only a week when I was given a noncommissioned office. I am also drillmaster and feel at home in that, thanks to you and our dear Alma Mater for the training which we received there.  The commanding officer of our company complimented me highly on my instruction in military science.” Louis R. Caire (Wyandotte)