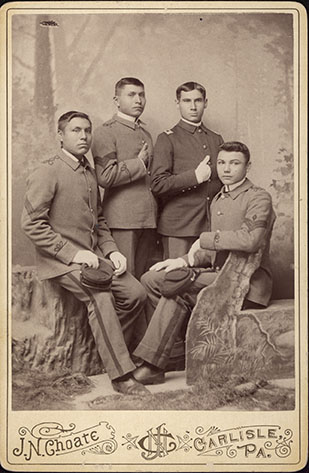 Carlisle Indian Industrial School was founded in 1879 in Carlisle, Pennsylvania, by Civil War veteran General Richard Henry Pratt as the first off-reservation boarding school for American Indians. His motto “Kill the Indian, Save the Man” was the rule by which American Indian students were educated. In addition to the 3 R’s (reading, writing, and arithmetic), many students learned trades and musical instruments. They were required to wear uniforms and learned to drill in military fashion, which made them desirable for recruitment into the armed services.

Just over 200 former Carlisle students have been identified to date as serving in the military during World War I. Of these students, many earned non-commissioned officer status due to their military training received at Carlisle and their education.

Carlisle was very proud of the students who served during the war and reported on war activities in every issue of the weekly school publication Carlisle Arrow and under its new name The Carlisle Arrow and Red Man. Recurring columns included “Red Cross Notes,” “Soldiers’ Letters,” and “Extracts from Home Letters.” The lengthier monthly publication from the first of each month included longer essays on how to become involved with the war; “The Second Liberty Loan” written by Secretary of the Treasury William G. McAdoo encouraged the buying of liberty loans for the success of the war. “Why the Red Man Fights for Democracy” by Arthur C. Parker argued that Indians were citizens of the world fighting for freedom. Under “General News Notes,” tidbits about the students who served and were involved in war relief efforts appeared under that column. Examples include “William Goode, who joined the Navy, is at Great Lakes, Ill.” or “Ned French and James Cajune showed their patriotism by attending the Red Cross meeting. They helped to cut bandages.”

The school closed on September 1, 1918, and was transferred to the U.S. Army, where it was used as Base Hospital 31 to help rehabilitate soldiers wounded during the war. An estimated 10,000 American Indian and Alaska Native students attended Carlisle during its years of operation.

“I am more than thankful that I was once a student of Carlisle because I learned how to drill with a gun and many other things that are helpful to one in the Army. I joined the Oklahoma State Militia on April 1st, and am now stationed at Fort Sill, Okla., Company D, First Oklahoma Infantry. There are two other boys here in the army that were students of Carlisle.  They are William Nephew and Jonas Powesheik.” Herbert A. Pappin (Osage)

“I like soldier life very much. It reminds me of school, only the drilling is longer, but I surely like it, and I am going to stand by the flag as long as my feet will hold me. I know I am doing my duty to our Stars and Stripes and I am going to do so as long as I am able.” Thomas Pickett (Crow)

“I was glad to hear that the old school was still running the old flag up with the same Carlisle spirit as of old, the news being obtained through the special Arrow for the Carlisle boys now serving in the Army or Navy. I was sure surprised to see such a large percentage in the service. It certainly shows what Carlisle is capable of doing towards her country.” Earl James Wilber (Menominee)