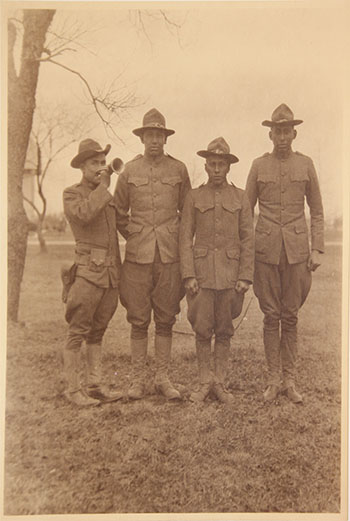 Although Indians enlisted in various branches of service—Army, Marines, and Navy—and performed many specialized services, most Indians were Army foot soldiers in the trenches. As they trained and were sent into battle, Army officials tended to look more and more at them as a race in analyzing their performance in the service. According to Army reports, the Indian recruits were physically superior to whites and were rarely rejected for physical reasons. “Flat feet” was the common cause for rejecting whites, but was practically unknown in Indians, according to the Army. Generally, Indians were healthier than others, and records show that according to their numbers they had fewer cases of illness and showed up in camp hospitals less frequently than other troops.

Army commanders found that the Indians had, in the officers’ words, “natural characteristics and dispositions” that proved useful. In a survey among commanding officers who had Indians in their units, not only did the officers report that the Indians were the most physically fit but that they had useful abilities. They were the best crawlers and crawled on night patrols. They had “a non-light reflective countenance” at night (Army bureaucratic language for “they were dark skinned”). They had good night vision, were silent at work and stoical under fire, and better than other soldiers at handling the bayonet. They were the best snipers and the best scouts. They seemed to have an innate sense of north and therefore of directions and could always find their ways back to their starting points. They worked better alone than in groups and had a propensity for going out into no man’s land in search of Germans. They didn’t hesitate, under fire, to go over the top or to risk exposure to machine gun fire to retrieve wounded comrades. These characteristics and habits, the officers said, were peculiar to their race.

Freeman Parkhurst (Oneida) of the 32nd Division, 319th Field Signal Battalion, Company C was described as having “considerable judgment and initiative while engaged in liaison duty at the front. Has shown considerable dexterity in whatever duty he has been engaged. He displayed exceptional ability as a night worker, runner, and observer.”

Lieutenant Owen H. Perry, officer with the 77th Division, 307th Infantry, Company I, states, “I was in command of half of the [company] and had occasion to use [Henry] George (Nez Perce) several times in scouting. Many times the woods were so thick that it was possible to see for only a few yards, but George without any compass followed the line and I leading the platoon with compass came behind. Invariable [sic] George was in front holding the right direction. He acted as a scout for me during nine days of the fighting at the front, which was continuous. When I sent him out for information almost invariable he brought it back, and the information he had was always reliable. He was recognized by every man in the company as the best scout in the unit.”

Because of their abilities, the Indians were primarily used as scouts. As scouts, they preferred working alone and going out at night in search of Germans. Their purpose was to secure prisoners from whom information could be taken. They were highly successful.  Captured documents told American commanders that the Germans recognized the effects of the Indian night raids. The colonel of the 97th Landwehrs, for example, issued an order to his battalion commanders at St. Mihiel that because American Indian scouts and runners were on the front, they should detail more snipers to pick off these dangerous men. Joseph High Elk (Cheyenne River Sioux) served with the 3rd Division, 8th Machine Gun Battalion, Company C. Lieutenant J.A. Soules described him as a competent runner. “His ability as a message carrier is most worthy of note, finding his way at all times through dense woods and underbrush, always delivering any message that was entrusted to him for delivery. He showed at all times great courage and endurance.” And some American strategists, on learning how concerned the Germans were about the presence of Indians, laid tentative plans to further unnerve the Germans. They proposed planning a number of night raids with men camouflaged as Indians dressed in full regalia.

The Indians were also adept at taking out machine guns. An aide to Commanding general of the 36th Division reported their method. “They would first pick them out, and then follow the usual Indian methods of crawling through the brush and taking the position with a rush. One Indian is accredited with having rushed a machine-gun position, kicking over the machine-gun in action, and bayoneting all the personnel of the machine-gun nest.”

Like Joseph Oklahombi (Choctaw), some emerged as war heroes in other ways. Oklahombi was a true war hero, one of those bigger than life kind. Marshal Phillipe Petain of France awarded Oklahombi the Croix de Guerre for his actions. Others were decorated with the Distinguished Service Cross, Silver Star, and Purple Heart for their bravery and valor during the war.