Agnes Anderson (Jamestown S’Klallam) was born April 5, 1894, in Tacoma, Washington. She attended and graduated from the Cushman Indian Trades School in Washington. After graduation, she worked as a registered nurse at Seattle General Hospital before the war began. She enlisted as an Army Nurse on July 3, 1918, and served at Base Hospital 50 in Mesves, France, which was staffed by nurses from the Pacific Northwest. She was discharged August 10, 1919. In 1921, she applied for veteran’s benefits and was approved for $195. At the time, she was working as a nurse at U.S. Marine Hospital #19 in San Francisco. She married Earl Falk Floyd and lived in California until her death on March 17, 1978. 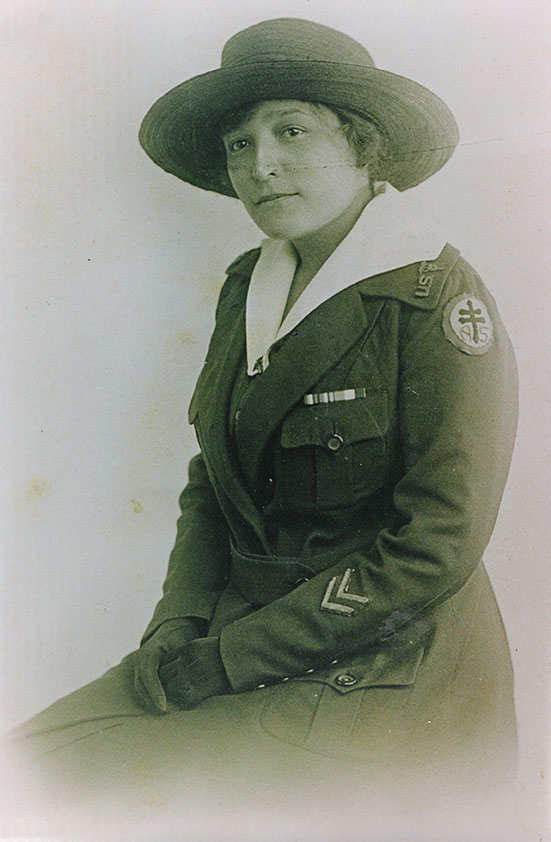 Edith Anderson. Courtesy of John Moses.Charlotte “Edith” Anderson (Tuscarora/Mohawk) was born April 10, 1890, on the Six Nations of the Grand River reserve near Brantford, Ontario, Canada. Due to Canada’s Indian Act, she was unable to pursue higher education without risk of losing her legal Indian status. Therefore, she moved to New York and received her training at New Rochelle School of Nursing, becoming the first Canadian Indigenous nurse in 1914. When the call for nurses went out, Anderson volunteered and worked as a nurse at Base Hospital 23 in Vittel, France, for the duration of the war. In 1919, she moved back to Canada and married Claybran Monture. She spent a lifetime working to improve Indigenous healthcare for which she was honored with a street and park named after her, Edith Monture Avenue and Edith Monture Park, respectively. She died days away from her 106th birthday on April 3, 1996, in Ohsweken, Ontario.

Effie Barnett (Choctaw) was born January 14, 1895, in Oklahoma. She attended Chilocco Indian School, graduated from the Presbyterian College at Durant, Oklahoma, and received her nurse’s training at All Saints Hospital in McAlester, Oklahoma. In February 1918, she volunteered for the Army Nurse Corps at Fort Riley, Kansas. She served with Base Hospital 63 at Caen, France, and Camp Hospital 95 at Verneuil, France. After the war, she married Van Shepherd. She died December 26, 1979, and is buried with a military headstone at Fort Gibson National Cemetery, Muskogee, Oklahoma.

Marie Broker (White Earth Chippewa) was born April 20, 1890. She attended Hampton Institute in Virginia, graduating in 1911. She received her nursing education at the City and County Hospital of St. Paul, Minnesota, graduating in 1914. She then accepted a position as school nurse in Ely, Minnesota, working there until 1916, when she took a position at Red Lake Hospital in Red Lake, Minnesota. In 1918, she became a field nurse alongside Dr. L.L. Culp, an eye, ear, and throat specialist. She served as chairman of the Red Cross Branch of the Beltrami County Chapter until she enlisted in the Army Nurse Corps on September 17, 1918. She was preparing to go overseas when the armistice was signed in November, so instead was sent to Camp Meade, Maryland, where she served until her discharge August 9, 1919. After the war, she returned to Minnesota, where she was the first public health nurse appointed by the Minnesota State Board of Health to work on the Leech Lake Reservation. She married Josiah J. Hoffman on February 13, 1923, and lived in California, working as a nurse. She died March 9, 1985, and is buried at Rose Hills Memorial Park, in Los Angeles County, California.

Ruth Cleveland Douglass (Mille Lacs Chippewa) was born March 28, 1893, at Brainard, Minnesota. She attended Pipestone Indian School in Minnesota. She volunteered as a nurse on January 16, 1918, at St. Paul, Minnesota. She wrote of her war experience in a survey administered by Joseph K. Dixon for Rodman Wanamaker.

“After receiving my letter of appointment, I was sent to Camp Pike, Arkansas. Was stationed there eight months, then sent overseas with Base 60. We were stationed at Bazoilles Sur Meuse acting as an evacuation hospital.

Remained in France ten months – in the mean time transferring to Base 79 of the same center. Was sent back to the states with detachment 41 on the U.S.S. Emporator [sic] the last of June 1919. Was then sent to General Hospital, Fort McPherson, Georgia. Put in fifteen months on duty there and in the latter part of September 1920, transferred to Station hospital, Fort Sam Houston, Texas.

I am not a regular Army Nurse, but came in as a War Emergency Nurse. Contrary to public opinion, the emergency still exists.” Ruth C. Douglass, A.N.C., 2nd Lt. 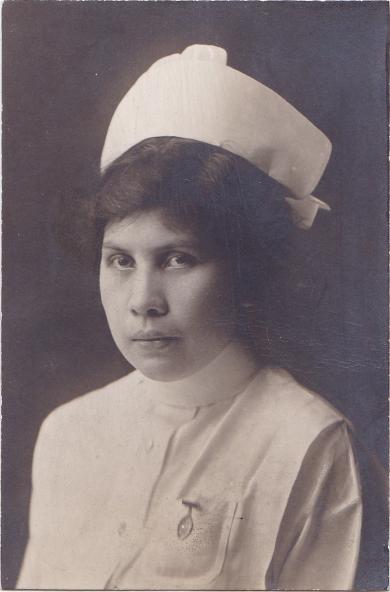 Cora Elm. Courtesy of Dickinson College.Cora Elm (Oneida) was born February 18, 1892, on the Wisconsin Oneida reservation. She attended Carlisle Indian Industrial School, beginning in 1906 and graduated in 1914. She entered the Episcopal Hospital School of Nursing in Philadelphia, Pennsylvania, and graduated in 1916. The following year, she was appointed as supervisor of wards at the Episcopal Hospital. She enlisted in the Army Nurse Corps on November 23, 1917, serving with Base Hospital 34 in Nantes, France, through the duration of war, being discharged August 19, 1919. She married James E. Sinnard in 1921. She worked in veterans’ hospitals throughout her career. She died June 9, 1949, and is buried with a military headstone in the Holy Apostles Church Cemetery, Oneida, Wisconsin. 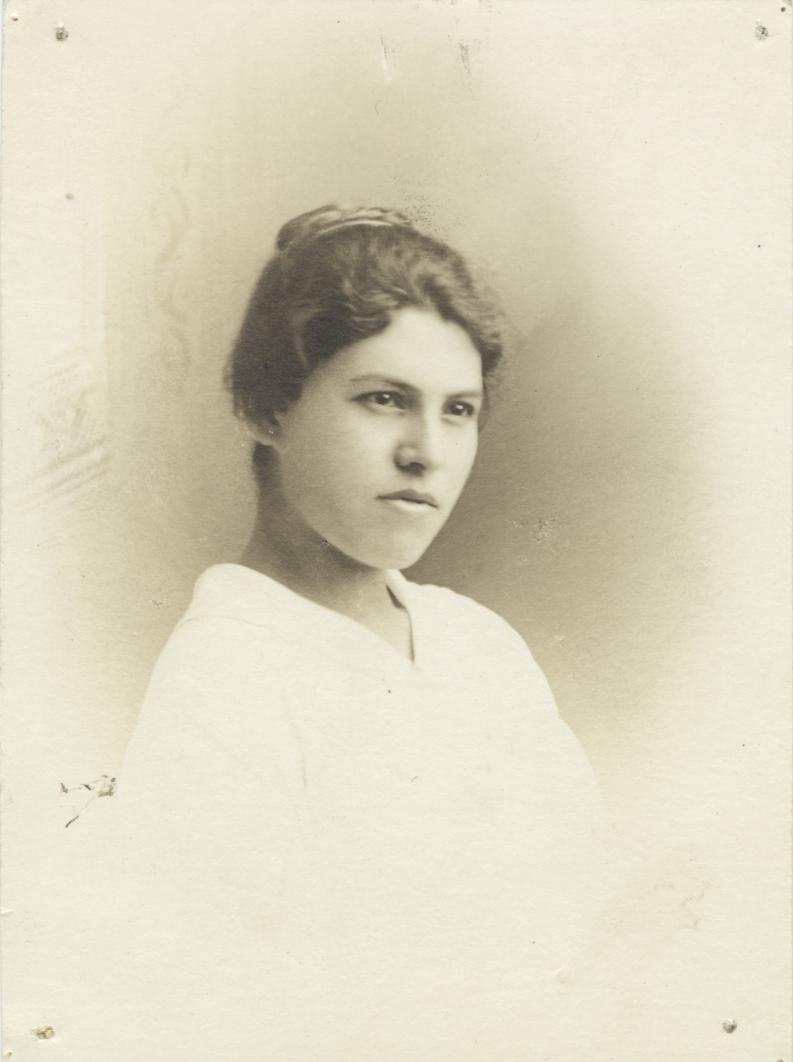 Margaret Frazier. Courtesy of Columbia University.Margaret Frazier (Santee Sioux) was born September 13, 1888, to Reverend Albert Frazier and his wife Elizabeth Howe in Niobrara, Nebraska. She attended school at the Santee Normal Training School in Nebraska before completing her nurse’s training at St. Johnsbury, Vermont. She volunteered as a nurse with the American Red Cross and served at the Base Hospital at Camp Bowie from 1918 to 1919. After the war, she married Peter Frederick, an ex-serviceman on February 12, 1920. They lived in South Dakota, where she worked as a nurse on the Yankton Sioux reservation. She died in January 1935 after a lengthy illness.

Ruth Hills (Apache) was born July 4, 1886, in New Mexico, and was adopted by a white family in Texas. She enlisted in the Army Nurse Corps on May 17, 1918, serving overseas with Base Hospital 102 in Vicenza, Italy, from August 4, 1918, to April 15, 1919. At Base Hospital 102, which was staffed by medical doctors and nurses from the Loyola University Medical School, they cared for 3,000 patients, with only 28 deaths. She was honorably discharged May 16, 1919. She married Clarence Wadsworth in 1922. She died December 13, 1973, and is buried with a military headstone at Rand District Cemetery in Johannesburg, California. 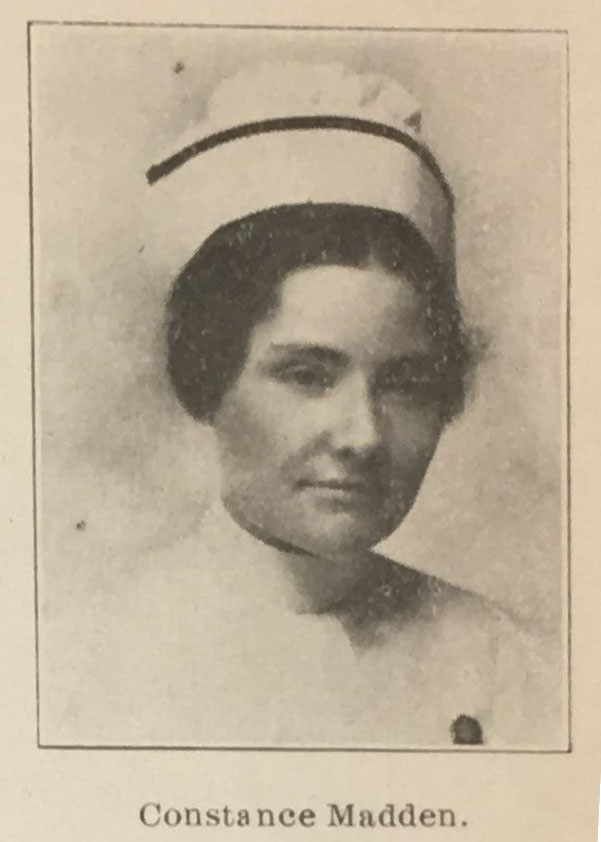 Constance Madden (Cherokee) was born in Indian Territory (now Oklahoma) on March 29, 1893. In 1913, she graduated from Haskell Institute in Lawrence, Kansas, and began nursing school at the Kansas City General Hospital. She graduated in 1916, and found employment at the same hospital. She volunteered as a nurse during the war and was one of 100 nurses that sailed across the Atlantic on the Mauretania on June 30, 1918. She served at Base Hospital 28, a hospital organized by the University of Kansas School of Medicine, at Limoges, France. It is reported that an almost 10,000 patients were admitted during its 6 months of operation with only 69 deaths recorded. She returned to the US in July 1919. In 1928, she married Carl S. Stillman, Jr. in Los Angeles, California. She died November 18, 1989, and is buried at the San Francisco National Cemetery with a military headstone.

Regina McIntyre (Salish/Kootenai) was born April 14, 1895, in Missoula, Montana. She attended Holy Names Academy in Spokane, Washington. She volunteered for the Army Nurse Corps, enlisting February 5, 1918. She was assigned to Fort Riley, Kansas, for preliminary nurses’ training before being sent overseas in September with Base Hospital 69 in Savenay, France. She served with Base Hospital 8, also in Savenay, and Base Hospital 63 in Châteauroux through March 1919. When she returned to the US July 20, 1919, she had been serving with Camp Hospital 109 at Camp Montierchaum. She was honorably discharged August 9, 1919. She married John Joseph Earley on November 17, 1920, in Manhattan, New York. She died in 1923 most likely in childbirth and is buried at Polson, Montana.

Lula Owl (Eastern Band Cherokee) was born December 27, 1891, in North Carolina. She attended Hampton Institute, a school dedicated to the education of African American students and Native American students, and graduated in 1914. She obtained her nurses’ training at Chestnut Hill Hospital School of Nursing in Philadelphia, graduating in 1917. She was a nurse at St. Elizabeth’s Episcopal School on the Standing Rock Sioux Reservation when the call went out for nurses. She volunteered and intended to go overseas. However, she was unable to pass the seaworthy exam due to extreme seasickness, and was sent to Camp Lewis, Washington, where she served for the war’s duration. She was given the rank of second lieutenant and secretly married Jack Gloyne, an enlisted man in 1918, even though it was forbidden. They had four children. She spent her lifetime devoted to healthcare and died April 17, 1985. In 2015, she was inducted into the North Carolina Nurse’s Hall of Fame. She was also bestowed the title Beloved Woman by the Eastern Band of Cherokee Indians.

Susie St. Martin (Chippewa) was born April 22, 1892, in Wisconsin to Peter and Mary Ann St. Martin. She attended Tomah Indian Industrial School for several years and then attended Hampton Institute from 1910 to 1914. She graduated from the St. Paul (Minnesota) City and County Hospital Nursing School and began work at the Red Lake Hospital as Assistant Nurse in 1917. She joined the Army Nurse Corps in 1918 and sailed to France on the Olympic on November 16, 1918. She served with Base Hospital 69 in Savenay, France. The hospital had a bed capacity of 2,500 and served over 15,000 sick and wounded from September 21, 1918, to June 7, 1919, when the hospital closed. She sailed back to the US on June 11, 1919. After the war, she moved to Twin Falls, Idaho, and worked for the local hospital. She married Loren Blakeslee in 1921, and they had two children together. She contracted streptococcie septicemia at the hospital and died November 27, 1928. She is buried at the Twin Falls Cemetery with a military headstone.