American Indians served in the Air Services during the war, several of whom excelled and extended their careers after the war, serving in World War II, also.

Yankton Sioux twin brothers John Keeler and Henry Keeler joined the Air Service at the age of 40, serving for the duration for the war.

Roy Lewis (Cherokee) from Nowata, Oklahoma, was loaned to the French Air Service for one year’s time as a motor expert. After the war, he described one of his experiences.

“…Went up 22,000 ft. testing a motor, a new Espano Swezo, 440 H.P. All at once, we took a downward course. I called the pilot and asked what was the trouble. When we were safe on the ground, he said, ‘Look in the air,’ in his old frog lingo. I looked and saw over 30 planes hovering over us, and all I could hear was the aircraft protection.” 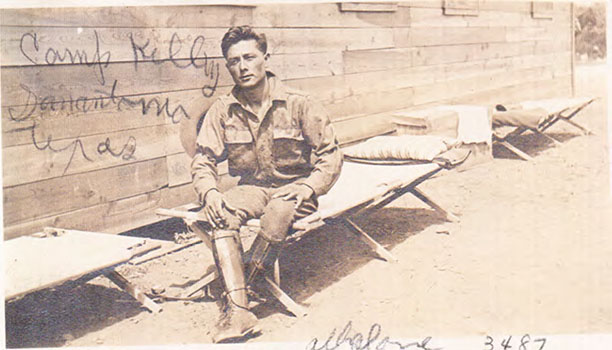 Frank Lemuel Rice (Chippewa) was a private first class with the 199th Aero Squadron of the Aviation Section Signal Corps. He saw action at Meuse-Argonne.

Sergeant Hobson Tupper (Choctaw) was a former student at Carlisle Indian Industrial School, who joined the Army, serving in the Air Service as an aviation mechanic. In a letter to the school in May 1918, he tells of his time at Call Field, but also requests a recommendation letter so that he can become a Reserve Military Aviator.

“I like my work here in Call Field as I am working as trouble shooter on the flying field and I took some tests for Aviation Mechanic and passed the test, I hope. The trouble shooters fly to different fields where ships were forced to land on account of motor trouble or something else. We are all anxious to go over and get a chance at the Huns.”

Tupper was involved in an aviation accident on November 20, 1918, where he was severely injured. He was flying with Lieutenant Ellsworth Gaskell on a war effort mission dropping United War Work pamphlets at a low altitude. The plane suddenly dove toward the ground and burst into flames. The pilot was instantly killed, and Tupper sustained serious injuries. He recovered and served through World War II, retiring as a Master Sergeant.

Frank Hall Wright, Jr. (Choctaw) was in training at the U.S. School of Military Aeronautics at Urbana, Illinois, when he succumbed to pneumonia or Spanish influenza on April 12, 1918.

An interesting observation is that a number of Osage men served in the Air Service. It is not too far a leap to assume that given their economic advantage over the general population, it is quite possible that they already had exposure and even training on airplanes prior to the war. Clarence Soldani was one such Osage from Ponca City, Oklahoma. He was a 2nd Lieutenant with the Air Service and a qualified pursuit pilot when the Armistice was signed. He was attached to the 41st Pursuit Squadron, 5th Pursuit Group, 2nd American Army, yet did not see action.

Second Lieutenant John Joseph Mathews (Osage) worked as a night flying instructor at Ellington Field, Texas, and was a pilot in the Department of Science and Research at Langley Field, Hampton, Virginia. He became a well-known writer and later helped to found the Osage Tribal Museum in Pawhuska, Oklahoma.

Clarence Tinker (Osage) made a name for himself in the Air Force. He graduated from Wentworth Military Academy and received a commission as a third lieutenant in the Philippine Constabulary, and made Lieutenant in the Army infantry in 1912. During World War I, he was a flight instructor and was promoted to Major. He began flying lessons in 1919. He steadily climbed the ranks and became Brigadier General in 1940, Major General in 1942 after Pearl Harbor, the first American Indian to attain that rank. He was also named Commander of the Air Forces in Hawaii. He was killed in action on June 7, 1942, in the Battle of Midway when his plane went down. Tinker Air Force Base in Oklahoma City is named in his honor.