Many of the American Indians that served in World War I served as military musicians, playing in army bands, navy bands, and orchestras. The majority of these men learned how to play Western musical instruments when they attended the various Indian boarding schools already discussed plus others like Phoenix Indian School in Arizona and Chemawa in Oregon. Here are a few examples. 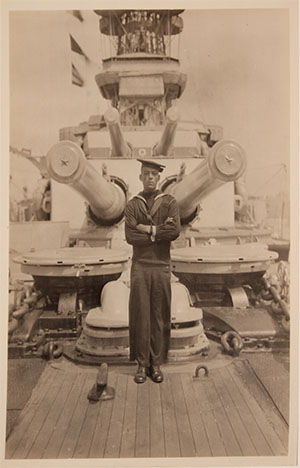 Ray E. Drapeau (Yankton Sioux) from Yankton, North Dakota, enlisted in the Navy as a musician. He proudly wrote of his experience, "I played with the largest band in the world led by John Philip Sousa, for eighteen months. I made all the Liberty Loans all over the U.S." He was part of the promotional tours that happened across the United States that encouraged people to buy Liberty Loans.

Luther Clements (Meechoopda) from Chico, California, was a former student and football player from Haskell Institute. He attained the rank of Musician 2nd Class and served with the 110th Engineers along with at least four other Haskell students and musicians. While the bands served to increase morale among the troops and French citizens, they also came into contact with the war. “One evening while our band was coming home from a concert tour, a Hun plane was over us, and the British searchlights were flashing in every direction.  One of the lights finally located him and it did not take very long before three or four lights were focused on him.  Our truck stopped and we took in the show.  It was sure a real treat to us then, but later the desire to see the Hun planes vanished, for we soon learned what it meant to have one of them throw down their deadly missiles.” After the war, the 110th Engineers band joined with an entertainment organization and traveled on the “Kerosene Circuit,” “on account of the poor lights we have to play by some nights.”

Two other members of the 110th Engineers band, Charles Williams (Caddo) and Allen C. Tanner (Cherokee), took advantage of the opportunities while in France and both reportedly attended bandmasters and musicians school in Chaumont, France, after the armistice was signed.

George H. May (Wichita) from Gracemont, Oklahoma, was a student at Carlisle and went to work at the Ford factory in Detroit, Michigan, upon graduation. Because of this, he joined the Michigan National Guard, and then was part of the 32nd Division 125th Infantry Headquarters Company. He attained the rank of corporal.

He writes of his experience in France, “Not very long ago, we had the pleasure of playing before General Pershing and Secretary Baker. Our band is showing up excellent and of course our comrades considered to be one of the best in France. So far we have played at a few villages where many a mourning inhabitants dwell. I never once realized how lively music was until we played at these villages. We are playing three concerts a week and this encourages our boys very much.”

Robert Emil Bruce (Turtle Mountain Chippewa) from Belcourt, North Dakota, joined the North Dakota National Guard in July 1917, as a cornetist. Once the unit was federalized, they were merged with the 41st Division 116th Engineers band under Harold Burton Bachman. They were one of the most famous bands during the war and were known as the Million Dollar Band. Bruce and his brother Fred Bruce, a clarinetist, played with the band until their discharge in 1919. Both men won many awards for their musicianship and toured with Bachman's Million Dollar Band after the war until 1921. 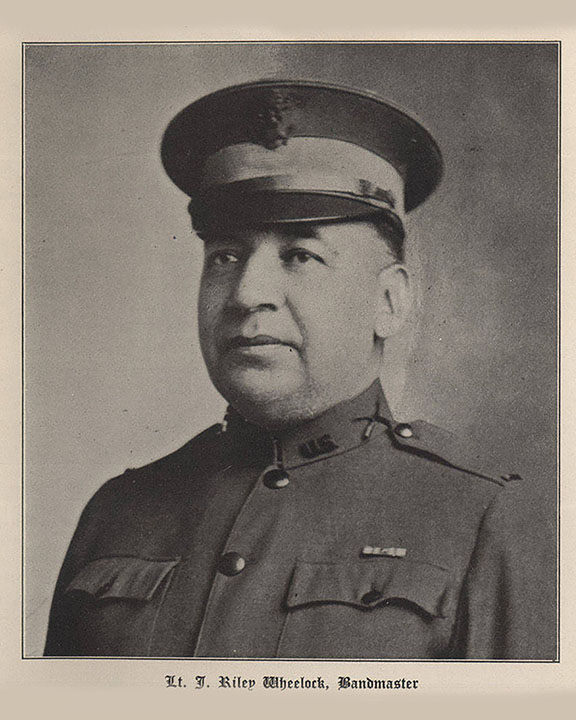 James Riley Wheelock (Oneida) from DePere, Wisconsin, graduated from Carlisle Indian Industrial School in 1896. Wheelock was an accomplished clarinetist and band leader, who came to be known as the “Red Rival to Sousa.” In 1917 after the outbreak of the war, he volunteered to serve as band leader under former President Theodore Roosevelt’s proposed division. However, the plan fell through. It wasn’t until July 1918, when Wheelock passed the bandmaster exam that he attained the post of band leader for the 808th Pioneer Infantry, an all-black regimental band out of Camp Meade, Maryland. He is the only American Indian to attain this leadership role, and one of only two non-black band leaders for all-black regimental bands. In October 1918, he was promoted to 2nd Lieutenant, and shortly thereafter wrote to the Harrisburg Telegraph describing his war experiences.

“The great drive which started on the 26th is the greatest battle of the war to this time and I witnessed it from a point about two miles in the rear of our lines. I am with the Supply Company, so I have had occasion to drive right into the line to deliver supplies. I wish I could tell you about the battle, but I cannot, so will tell you about it when I see you again.”

Under Wheelock’s direction, the 808th won the “Best Infantry Band” award for the entire American Expeditionary Forces at a contest held at Brest, France, on June 2, 1919. The band was privileged to perform for President Woodrow Wilson upon his departure from Brest, on June 29. He was honorably discharged on August 28, 1919.

Guy Maktima (Hopi) is an 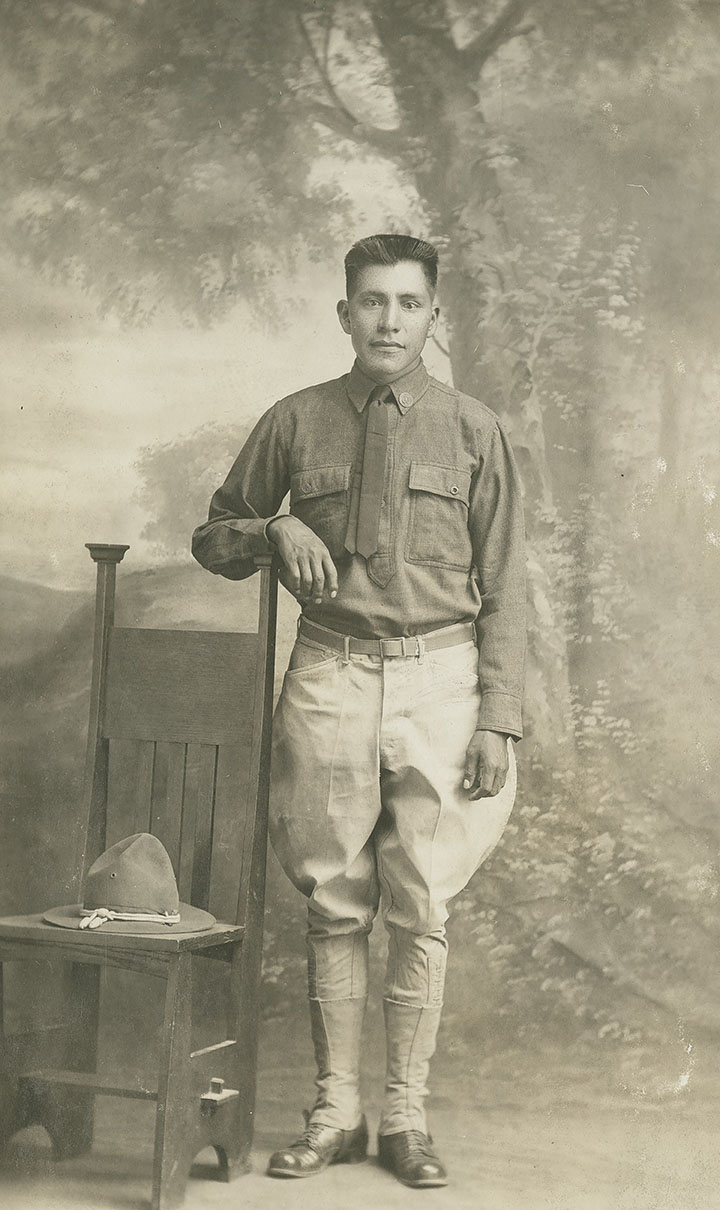 other remarkable American Indian musician, who made a name for himself during WWI. A Hopi from Arizona, Maktima attended Sherman Institute in Riverside, California, and graduated from the Phoenix Indian School. While still a student at Phoenix, he enlisted in the Arizona National Guard’s 1st Arizona Infantry, Company F, that included 28 other American Indians. In 1918, they were activated for federal service for WWI. The company was re-flagged and formed the 158th Infantry Band, where Maktima played the trombone. They served in France from August 1918 through April 1919.

In addition to Maktima, five other members of the 158th Infantry Band were American Indian. As they performed throughout the French countryside, Maktima and his fellow American Indian soldiers were seen as curiosities since none of the French had ever seen an Indian before. On Armistice Day, November 11, 1918, the band performed all day for celebrations. This entry from the diary of the band director Karl R. Goetz describes the day. “Band got out at 10:30am and jassed [sic] up and down the streets of Chelles playing the Marseilles and the Star Spangled Banner marches and the Sick Mule…In the afternoon the band was again called out on the eleventh hour….”

On the very next day, November 12, Maktima was promoted to Musician First Class. The band performed for President Wilson at the American Ambassador’s House in Paris, on December 18. In April, they returned to New York, where 28 men from the 158th Infantry Band joined 28 squads from the Regiment to take part in the “Liberty Loan Parade.” Goetz writes, “They hiked up Fifth Avenue and all over town putting [in] 16 hours of the hardest kind of marching.” On May 3, 1919, the men were honorably discharged.