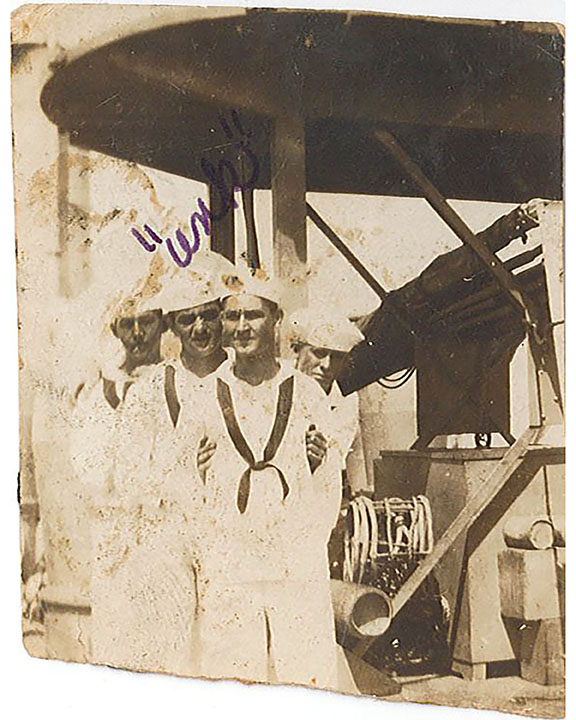 Approximately one thousand American Indians and Alaska Natives served in the Navy during World War I. The Navy was a desirable choice for a number of reasons. It appealed to the many who grew up in coastal areas like North Carolina, California, Washington, and Alaska. But it was also appealing to those from the Southwest for cultural significance. Water is considered sacred to many of the tribal nations located in the desert areas, and many American Indians from those tribes joined the Navy as a result. Students of Sherman Indian School, Chemawa Indian School, and Phoenix Indian School joined in large groups.

Native Americans found success in this branch of the military, including Joseph “Jocko” Clark (Cherokee) who was the first American Indian to graduate from the U.S. Naval Academy in 1917. Clark served on the U.S.S. North Carolina, a ship that was instrumental in the development of naval aviation, a career in which Clark would excel after the war, eventually making the rank of Admiral in World War II.

“I transferred from radio to seaman, from seaman to fireman third class, and have reached engine driver second class and head oiler, with rank of second class petty officer. It pays $52 per month and I hope to reach first class engine driver in January.”

During the war, the U.S. Navy played a vital role in keeping the German submarines at bay to ensure the transport ships taking soldiers to France would be protected from the enemy. Naval convoys were established where large groups of ships traveled together protected by destroyers, who remained at the ready if a German submarine attacked. A transport ship took approximately two to three weeks to travel from an American port such as Hoboken, New Jersey; New York, New York; and Brooklyn, New York; to a European port, like Brest, France, which was one of the main American bases during the war. More than two million American troops were transported across the Atlantic Ocean and survived 183 submarine attacks.

Alfred Edwards (Swinomish) participated in the Naval convoys as a fireman on a transport and made 16 round trips to France during his service. Crus McDaniels (Zuni) was a Musician 1st class aboard the U.S.S. Mercury and made seven trips across the Atlantic during his two and a half years in the service. Alex Graham (Sioux) served on convoy duty, destroying mines, and submarines in the English Channel and North Sea.

“We came here [Navy Yard, Philadelphia] about two weeks ago and expect to stay here for the summer before we take our new ship out. We have not finished here yet. It is a cargo ship. I guess you know about me being a gunner in the merchant marines that all we will do is transport as war goes. Of course that is a good part of the service. It is called the Armed Guard or the Merchant gunners. All we have to do is take care of the guns and stand watch when we are in the war zone and that is only six hundred miles from the coast and the other side. As you can see just about how we have it.  I rather be on a merchant marine crew than other place in the Navy. Since I’ve had experience on battleships, I liked the U.S.S. Pennsylvania alright but not like to do this. Of course we take more chances where we are now then [sic] we would if we were on a battle ship.”

Many of the men experienced danger firsthand from the German submarines. Clarence W. Bizer (Lummi) served eleven months in the war zone where he encountered five German submarines and engaged in battle with four, including the one that sank the U.S.S. Tippecanoe. Sam Shebingus (Chippewa) was on a convoy ship when it was torpedoed off the Irish coast and sank. Nearly all the crew were rescued, including Shebingus, who was picked up by a rescue ship, after having been afloat for two hours. Shebingus wasn’t the only one who suffered a close call. Jerome Kennerly (Blackfeet) was a private in the 158th Aero Squadron when his transport ship the S.S. Tuscania was attacked.

“It may interest you to know that I am one of the “fortunate” or “unfortunate” survivors of the S.S. Tuscania; the disaster of which no doubt you have read about. After being torpedoed about six fifty-five p.m. our rescue was made possible thru the brave efforts of the British sailors aboard the destroyers, who risked their own lives in order to pull-up alongside of the doomed Tuscania.  But am pleased to inform you that outside of a few accidents the Officers and men behaved very manly.  We all landed at different ports, in Ireland, where we remained for several days, before crossing the Irish Sea to England."

“I was a member of the crew on the U.S.S. Covington and was on board same when it was torpedoed and sunk by a German submarine July 1st, 1918. Was picked up, transferred to the U.S.S. Wainwright of the Destroyer Flotilla and was discharged from service July 22nd, 1919.”

“I have made two trips to France this summer and have had some narrow escapes from U-boats. Three ships were sunk in our convoy on my first trip over and one the last trip.” 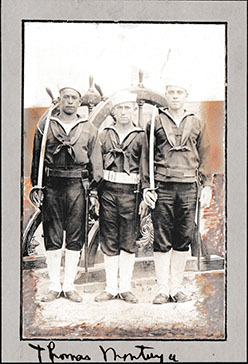 Thomas Montoya (far left). Courtesy of Dickinson College.Some were not as fortunate and did not survive the naval disasters. Joseph Sherman (Spirit Lake) was killed in the sinking of the Moldavia, making him the first American Indian killed in action from North Dakota.

Additionally, naval men served in non-European arenas during the war: Guantanamo Bay, Cuba, the Philippines, and even Siberia. Luke Conley (Eastern Band Cherokee) and Thomas Montoya (Taos Pueblo) were both stationed at the U.S. Naval Station at Guantanamo Bay. Juan DeVilla (Mission) was fired upon twice by German submarines while convoying a transport of Marines from Guantanamo Bay to Newport News, Virginia.

“I left home (at Tulsa, Oklahoma) on September 15, 1917, going to Colorado to a recruiting camp.  I stayed there two months and was then sent to Angel Island, California; just across from San Francisco.  On December 5, 1917, I was transported to Honolulu, Hawaiian Islands.  From there we sailed to the Philippine Islands, landing in the Philippines on January 6, 1918.  We stayed six months.  I have been in China also.  I am now in Siberia.  Landed here in August 1918.”

Native Americans were proud to have served in the Navy and spoke with fondness of their time in the service.

“The Oregon, known as the “Bulldog of the navy,” has been sailing the seas for Uncle Sam since 1896 and in that time has won a name as one of the historic ships of the navy when she romped around the horn and fought the good fight to victory at Santiago; and she has also done her part in the recent great war and is now ready to retire. And in the years to follow when one talks about the Oregon, I will be proud to say that I once swung my hammock between her decks as a member of her crew.”