To Army officials, Joseph Oklahombi (Choctaw) and other Indians at the front were apparently just doing what Indians did best in the war. Their characteristics and habits, their officers later claimed, were peculiar to their race. This was racial stereotyping, of course, but race had always been an element in Indian policy. It was especially so in the World War I period. Indians were thought to be a vanishing race. The idea of blood quantum had entered Indian policy in a major way in the allotment period. Indians who were half or less were considered “civilized”. Those with more Indian blood were judged incompetent until they could prove otherwise. As more became mixed bloods, Indians were believed to be vanishing. Their World War I experiences seemed to counter that idea as Army officials praised their heroics as typically “Indian.”

What did the Germans think of American Indians as fighters? When American Indians and blacks began to show up on the front in Europe, the German press made fun of the Americans, who, they said, were having to rely on people of color, inferior races, to fight their battles for them. By the end of the war, however, the Indians had amassed such an impressive record that the German press tried to explain it away. Writers began to deny that there were any Indians at the front. Everybody knew, they said, that the Indians were ignorant, degenerate drunks.

Sadly, both the American and German stereotypes have plagued Indians since. The drunken Indian was a stereotype common throughout the twentieth century, although not so much so far in the twenty-first. Alcoholism is a major disease in Indian Country, but drunkenness is not characteristic of the race. But the Indian as a “natural born scout” also plagued the Indians in armed forces. Narratives by American Indian veterans of the Viet Nam conflict reflect the common theme that they were called by names like Chief and Geronimo and, as natural scouts, drew more than their share of duty as point men on patrols.

But World War I had positive lasting effects on Indian Country. Those veterans who were not citizens, but wished to be, were granted citizenship. Citizenship to all American Indians and Alaska Natives was granted on June 2, 1924, when the Indian Citizenship Act was signed into law. Indian veterans had access to the veterans’ hospitals and other benefits. They became very active in the American Legion, formed in France in 1919. The Legion became an instrument of social change in many tribal communities. Stints as post commanders and other officials became stepping stones to public office. Then, of course, there was the legacy of Code Talking to which more than thirty tribes later contributed talkers, particularly the Navajos, Kiowas, and Comanches, during World War II. 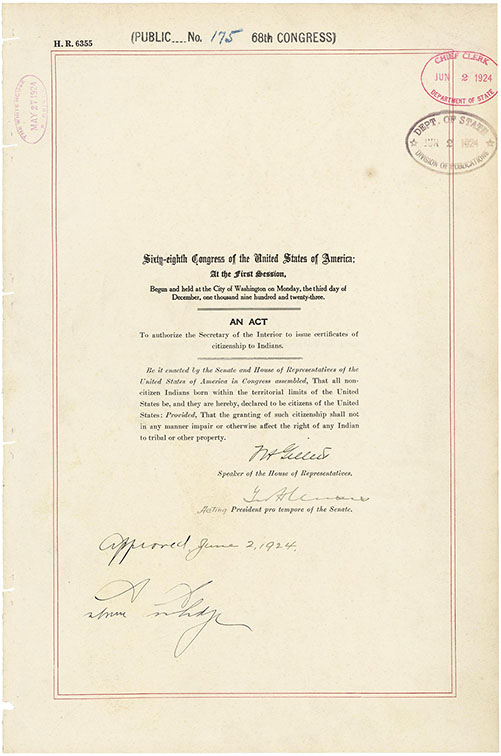 For others, their service during the war provided them with opportunities they might not have had. William B. Newell (Mohawk), for example had not finished high school when he enlisted.  He served as French interpreter for the purchasing department of the American Army in France. After the war he stayed in France, completed his high school education, returned to earn a degree at Syracuse University, and worked in non-profit organizations and sales. Ben Dwight (Choctaw) worked in intelligence during the war and afterwards was a newspaper publisher and chief of the Choctaw Nation during the 1930s. John Joseph Mathews (Osage) taught night flying during the war and afterwards became an Osage historian, novelist, and founder of the Osage Tribal Museum. General Clarence Tinker (Osage) and Admiral Joseph James “Jocko” Clark (Cherokee) became career servicemen.

Today, veterans in all tribes are held in high esteem by their communities.