When the Dawes Commission registered the citizens of the Five Civilized Tribes for land allotments, the commissioners registered about 20,000 Freedmen in the Cherokee, Chickasaw, Choctaw, Muscogee (Creek), and Seminole Nations. The Freedmen were descendants of slaves held by tribal individuals or free blacks who were living in the tribal nations in 1860. Following the Civil War, treaties negotiated with the tribes provided for the adoption of the Freedmen as members of the nations. All of the tribes except the Chickasaws adopted them. The Chickasaw treaty contained a provision that adoption of the Freedmen depended on the Chickasaws’ taking money held in trust for them by the federal government. If they did not take the money, the government would remove the Freedmen from the Chickasaw land. The Chickasaws refused the money, but the government did not remove the Freedmen. The Chickasaw Freedmen lived without citizenship in any nation until 1901.

The Freedmen of all Five Tribes were given U. S. citizenship in 1901, but, just as Indians, those who were tribal citizens retained their membership in the tribes.

Although the Cherokee, Choctaw, Muscogee (Creek), and Seminole Freedmen were citizens of the Indian nations when the United States entered World War I, they were segregated, along with African Americans, into separate units. They were listed on their registration forms as Negro, African, Ethiopian, or Colored, and the registration cards for Oklahoma had a perforated lower left-hand corner that could be torn off if the registrant was black. Removal of the tab made identification of black soldiers easy for the bureaucrats.

Many of the tribal Freedmen served in Pioneer or Engineering units, which did such tasks as hauling, lifting, digging trenches, and stringing barbed wire. Some, however, shod horses and drove wagons. Still others were in service units and worked as barbers, waiters, and cooks.

Below is a list of some Freedmen soldiers who have been identified. 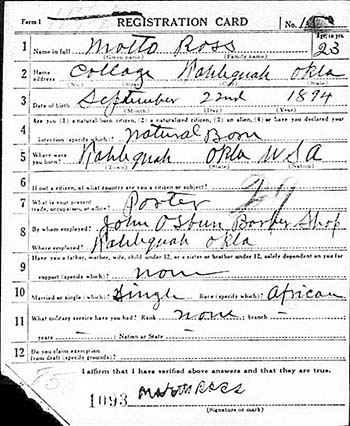