Americans All! Foreign-born Soldiers in World War I

You could not imagine a more extraordinary gathering than this american [sic] army, there is a bit of everything, Greeks, Italians, Turks, Indians, Spanish, also a sizable number of boches [German soldiers]. Truthfully, almost half of the officers have German origins. This doesn’t seem to bother them... Among the Americans are sons of emigrated Frenchmen and sons of emigrated boche. I asked one son of a Frenchman if these Germans were coming willingly to fight their brothers and cousins, he squarely answered me: “yes!” 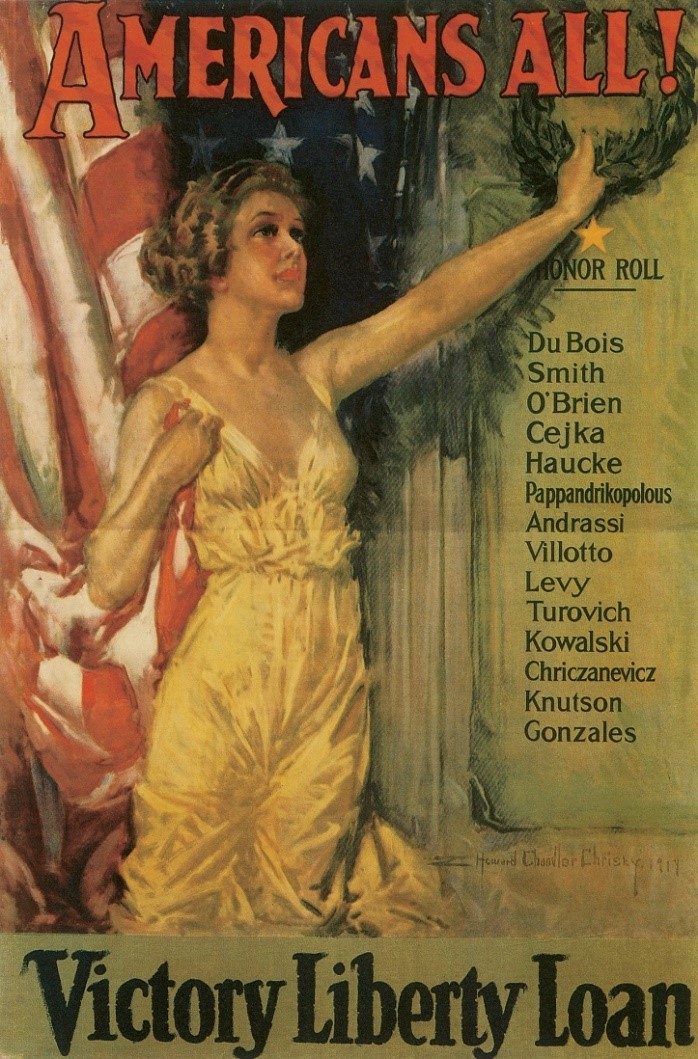 Although immigrants have served in every American conflict since the Revolutionary War, World War I represented the first time military forces were so ethnically diverse and foreign-born soldiers served in such large numbers. Between 1880 and 1920, over 23 million people – primarily from southern and eastern Europe – immigrated to the United States. During the Great War, almost one in five immigrants became soldiers in the United States Army - representing some forty-six nationalities.

According to Nancy Gentile Ford, historians generally depicted the immigrant experience in America during the First World War as one of forced assimilation, ruthless xenophobia, and harsh Americanism. Although this certainly describes civilian society during the war, there is more to the story. Ford examines the training and treatment of immigrants in American military service.(2) She found that that this new type of soldier, the foreign-born soldier, challenged the cultural, linguistic, and religious customs of the traditional American army and compelled the United States military to reevaluate their training of soldiers both native-born and foreign-born.

In order to train all soldiers, the War Department used first-hand Progressive Era socialization methods along with the military’s new emphasis on raising the morale of men. In the case of immigrant soldiers, the War Department also asked for the assistance of ethnic group leaders to help train and produce highly effective foreign-born troops. As the need for an effective fighting force was clearly tied to issues of troop morale, the War Department, created a special unit designed to work with immigrant soldiers – the Foreign-Speaking Soldier Sub-Section (FSS).(3) FSS policies, all approved by the War Department, demonstrated a clear respect for the religious needs and cultural traditions of the various ethnic groups now found in abundance (over 18 percent were immigrant soldiers) among the U.S. troops. This respect, along with carefully planned training and morale lifting methods, shaped a disordered group of foreign-born men into an effective fighting force. Ultimately, Ford concludes that contrary to traditional assumptions, the World War I experience did not promote a melting pot culture that transformed immigrant soldiers into Anglo-Saxon Protestants. Instead, World War I redefined the definition of “Americans All” by promoting an “atmosphere of dual identity” which allowed immigrants to display pride in their ethnicity and the traditions of their homeland as well as demonstrate their love for their newly adopted country – The United States of America.

Hello, and welcome to our website dedicated to Americans All!: Foreign-born Soldiers in World War I written by Nancy Gentile Ford. Recently, the U.S. World War One Centennial Commission invited me (Nancy Gentile Ford) to join its Publishing Partnership on a website. The letter asked if I would build a website “based on your important book Americans All: Foreign-born Soldiers in World War 1.” This site “will host your entire compendium of primary sources research and knowledge developed while writing Americans All.”

Immediately, I thought this would make a perfect “Student-Professor Project.” I am excited about working with Justin Sharp. He is an excellent undergraduate senior student, with the worthy goal of eventually earning a Ph.D. in military history. This WWI Centennial Commission joint-project is a unique opportunity for him to grow even further in this field, and I hope to be of assistance as this exceptionally talented history major moves toward his future academic goals.

The purpose of our World War I Americans All! Website is to inform our viewers of the following:

For simplicity, we have divided the navigation bar by the respective chapter of my book, and together Justin and I have summarized each chapter. Justin has selected pertinent primary sources from my book to post on our website. Although it is not required to view each chapter chronologically, when taken together in order, the story is better understood. We also added a section for primary sources used in the book. In addition, many new primary and secondary sources have become available since Texas A&M University published Americans All in 2001 (see Additional Primary Sources). Both Justin and I are searching for photographs and new sources now available -- and will add this material to the website.

In summary, we hope you find the following informative, useful, and still very relevant today.

3. The Foreign-Speaking Soldier Sub-Section was under the command of the Morale Section, which was under command of the Military Intelligence Section (soon Division) – which reported directly to the War Department.

Americans All!
Foreign-born Soldiers in World War I