Sgt. Frank L. Carbaugh's 1918 Poem "The Fields of the Marne"
By Connie Ruzich 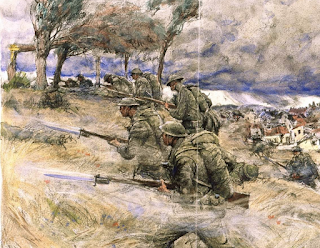 About Connie Ruzich and the "Behind Their Lines: Poetry of the Great War" Blog
Connie Ruzich has gone where no one has gone before in her quest to unearth the faded poems of the Great War. While she is an expert in the famous WWI poetry of Joyce Kilmer, Wilfred Owen, and Siegfried Sassoon, she has become the go-to specialist for poems written by lesser-known poets. Her archival work has shown that poetry wasn't only for the more literary-inclined service men and women; writing poetry was seen as an essential and patriotic duty for surviving the front. In fact, as Ruzich, shows in a recent post, in November of 1918, America’s Poetry magazine proclaimed that the war had made “poetry...an essential industry.”

Of the Dreadnoughts - By Jeffery Hess

Of the Dreadnoughts
By Jeffery Hess 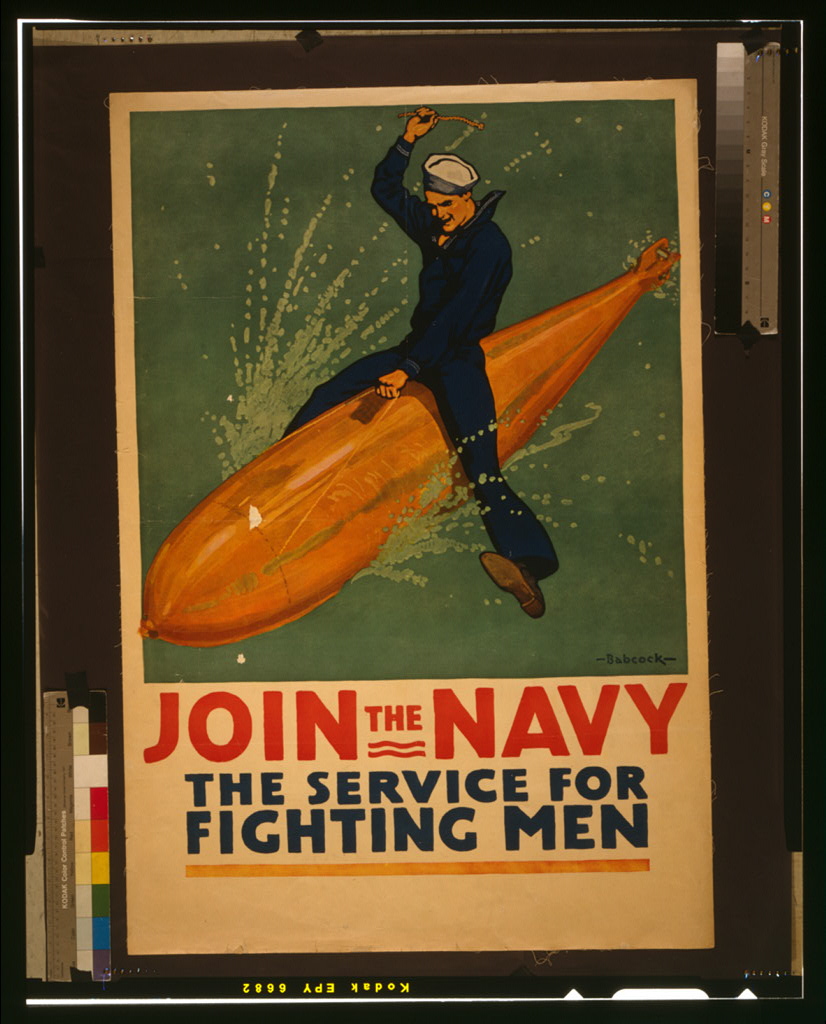 Jeffery Hess, author of Beachhead, Tushhog, and the short-story collection, Cold War Canoe Club, navigates us through one of the less familiar stories of WWI about the U.S. Navy and its formidable Dreadnoughts.

Florida and the Navy are as much a part of me as blood and bone. I’ve lived in the state all but the first four years of my life. But the only thing I find myself writing about more than Florida is the Navy. Having served aboard two ships, I’m endlessly fascinated by shipboard life—especially in times of war. I’ve written about Navy ships and submarines and populated them with people real and imagined. A few years ago, I was putting together a collection of Navy stories set during the Cold War. I had a good number of stories, but I always looked for the next idea, the next ship. The stories I had were heavy on the later portion of the era, so I began looking back.

I did some digging, took copious notes, and accidentally rediscovered the Dreadnoughts.

Read more: Of the Dreadnoughts - By Jeffery Hess

F. Scott Fitzgerald and WWI: The "Crack Up" Essays

F. Scott Fitzgerald and WWI: The "Crack Up" Essays
By Colin Halloran 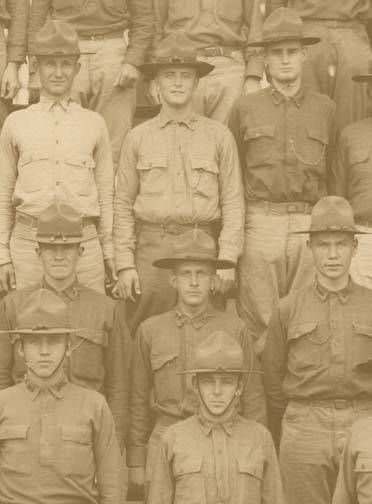 Detail from photo of Fitzgerald in 1918 (top line, middle) at Camp Sheridan, Alabama where he served in the 167th Infantry, the Alabama Pioneers. Alabama State Archives.

Paul Fussell, in his seminal The Great War and Modern Memory, posits that “logically, one supposes, there’s no reason why a language devised by man should be inadequate to describe any of man’s works. The difficulty was in admitting that the war had been made by man and was being continued ad infinitum by them” (170).*

While there is much debate and discussion over the “official” definition and dates of Modernism, we cannot overlook WWI and the ways it changed literary language. Broadly, the Modernist movement sought to move away from traditionalism and towards originality, particularly focusing on a “non-logical, non-objective, and essentially causeless mental universe.”**

Because the war itself was non-logical. Even the innovative language and stylizations that propelled Modernist writings prior to the war were suddenly inadequate after the horrors the world now knew humankind was capable of. 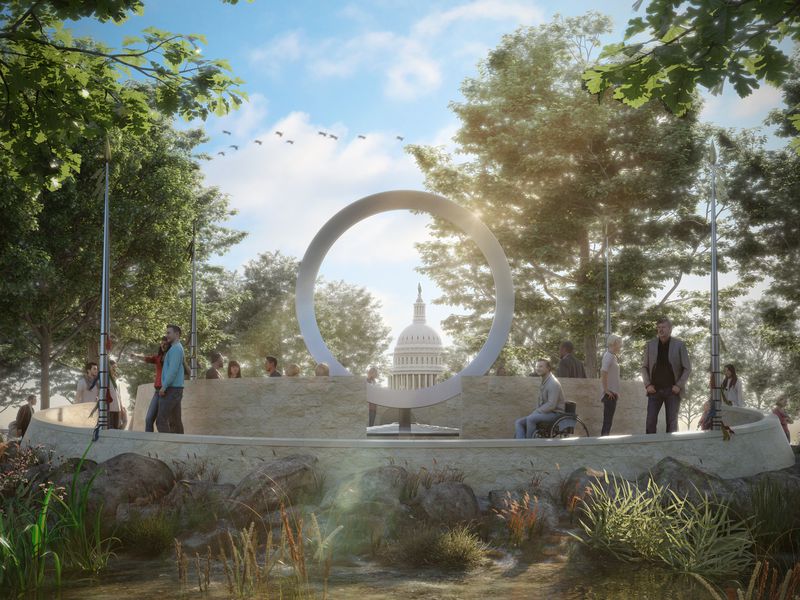 An artist’s rendering of the Capitol Dome as seen through Harvey Pratt’s proposed “Warriors’ Circle of Honor” (National Museum of the American Indian) . Image courtesy of Smithsonian Magazine

In 1925, the Muwekma Ohlone Indians were erroneously declared extinct. Alan Leventhal has dedicated his life and career to correct this mistake. Here's a look at his work on writing and telling the story of Muwekma Ohlone WWI veterans, who have proved that they have never stopped living...or fighting:

I was hired at San Jose State University in the Department of Anthropology in 1978.  As a trained archaeologist I worked on a multitude of ancestral Ohlone heritage sites. However, at that time, there was scant information about the Ohlone Indians (aka Costanoan Indians) of the San Francisco Bay region.  In 1980, two anthropology students escorted Chairwoman Rosemary Cambra, who claimed to be an Ohlone Indian to my office.  After having an engaging discussion about her family and what she wanted to accomplish relative to future research on her tribe, I informed Rosemary that, although I had taught about Native American tribes at the American Museum of Natural History and worked directly with Washoe, Paiute and Shoshone tribal communities in Nevada, I knew virtually nothing about California Indians, let alone about the history and heritage of the Ohlone/Costanoan tribal groups.

Yoga and Animals: Inspiration for WWI Poetry
by Jane Satterfield 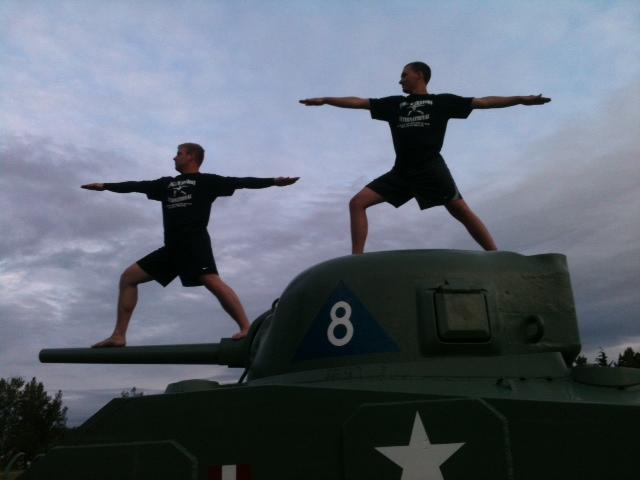 Ever since Jane Satterfield's father served in Desert Storm, she has felt drawn to explore the legacy of war and the ways that inheritance resonates well beyond the battlefield into our homes, our language, and the daily fabric of our lives. WWrite has the honor of posting two of her poems inspired by WWI: "Elegy with Trench Art and Asanas" and "Bestiary for a Centenary." Following the poems, Satterfield gives an insightful commentary on her creative process, yoga, and the importance of commemorating the Great War, which includes remembering animals:

Elegy with Trench Art and Asanas

The studio door swings shut and Emily instructs us
to begin in an easy seated position. Eyes closed, we begin

to check in, to be mindful of each feeling that rises. Time
to think of some intention, something as simple

as the reason that brought you to your mat—that, not the noise
rising up from Stoneleigh Lanes, the business at basement level—

thunderous, I think, though nothing next to the volley of
shellfire and mines going off in the front’s busier sectors—

strange sound track stuck in my hearing long after
I left the museum’s cool halls, since I walked the wood-

planked trench alleys of the Great War Exhibit. Overhead,
dangling on cables above us, the artifact highlights—Fokker,

Siegfried Sassoon. Wilfred Owen. Isaac Rosenberg. Over the years, the well-crafted words of these poets have shaped our vision of WWI's most terrible casualties: suffocation by mustard gas, death and disease in the trenches, disfiguration, shell shock. This "poet's war" was undoubtedly one of the worst the world had ever seen and, more than any other conflict in history, we have relied on poets to help us understand its horrors.

According to Adin Dobkin, little-known American WWI writer, Alan Seeger, offers another layer of understanding. In his article that appeared in The New York Times Magazine last week, "The Soldier Poet Who Went to His Grave With a Romantic Vision of WWI," Dobkin not only acquaints us with this poet, who also happens to be folksinger Pete Seeger's uncle; he also introduces a notion we don't normally associate with the more famous WWI poetry: war as sentimental.