Retired Marine, Ernest Lucas McClees, on Dehumanizing the Enemy: "One in the Same"

Retired Marine,  Professor Ernest Lucas McClees, on Demonizing the Enemy: "One in the Same"

Writer, scholar, and professor, Ernest Lucas McClees, relates the dehumanization of Eastern Troops during WWI to prejudice against immigrants and minorities today in the U.S. 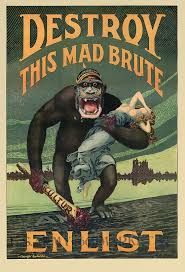 From the First World War to present conflicts an enduring question remains: When the United States goes to war, who actually is it going to war with? As a nation that was created as a refuge for people from other nations around the world, how dangerous is labeling someone as the "other?"

As the 19th century morphed into the 20th century, the United States' population was growing rapidly, with many immigrants from Eastern and Southern Europe.These immigrants made the changes possible for the United States to expand its emerging industrial economy. This burgeoning industry and ethnic minorities were both indispensable and significant in shaping a nation on the cusp of financial and social power. The European minorities were diversifying the United States religiously and culturally, but they were also busy assuming their newfound national identity. Native languages and customs co-existed with the working language of English and modern American rituals.This functional climate succeeded, but as the United States turned toward war so did the positive social advancements and social progress.

World War I propaganda posters such as "Beat the Hun" or "Destroy this Mad Brute" strongly dehumanize the troops of Eastern Europe in a sardonic light.This propaganda, in tandem with various social programs, created distances between these new Americans. It not only harmed the progress of former Eastern Europeans and their families but of other immigrant groups as well. Lines of division and social injustice increased during a time when it would have been more productive to build cultural bridges for propelling universal assimilation or, at least fostering an understanding of the newer population who had become the backbone of the economy.Maybe it could have been possible to correct social unrest and problems by redirecting the propaganda during the war. 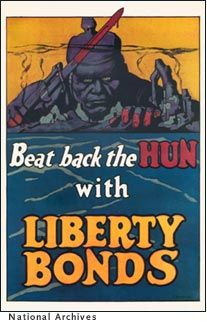 WWI-Era Propaganda PosterWWContemporary American seems to mirror the problems and disgraces that appeared for immigrant groups during World War I. Disturbing parallels abound. Multinational immigrants and their children who contribute to the current economy are under fire with the increasing threats of restrictive immigration laws. Hate crime is on the rise. Propaganda is helping further a human divide with negative assumptions and imagery.Today, we find community watch parties, slogan posters a printed recent cousin of yellow journalism, organized hate groups, and mass-hysteria xenophobia influenced by propaganda in every form of media ranging from print to live coverage. All seem to have an agenda, and currently, it looks as if unity is not a strong selling point.

Sadly, this is not a time to highlight differences, but similarities, and to encourage a public understanding of the process of enculturation, to learn from one another. In a world with a globalized economy, people live and work in multinational situations now more than ever before. The United States and its economy are dependent on these overlapping fabrics. During the Democratic National Convention last summer, Khizir Khan challenged a presidential candidate by telling the story about his son who died fighting in Iraq as a Muslim American Army captain.While this example drew much attention at the time, it only started the current dialogue about cultural and religious divides. Since then, the dialogue has intensified, trying to polarize geographical, religious, and cultural differences. In the name of prosperity and true egalitarianism, it is time that nations with multinational backgrounds and identities win the internal war among themselves when they fight wars abroad. This "double war" was a gargantuan dilemma during World War I and remains the same today.

During the Democratic National Convention Khizir Khan challenged a presidential candidate by highlighting that his son died fighting in Iraq was a Muslim American Army captain.

Retired U.S. Marine, writer, scholar, and teacher Ernest Lucas McClees Jr. is a tenure-track faculty member at Eastern Kentucky University, where he teaches both Spanish and arts & humanities at the Model Laboratory School. He also serves as an instructor for the Veteran Studies Program. Eastern Kentucky University was recently recognized for its veteran focus by Michelle Obama, and named Most Veteran Friendly University two years in a row by G.I. Jobs magazine. Dr. McClees's areas of research include intercultural competency, veterans in education, veteran efficacy, comparative education, and critical education.​