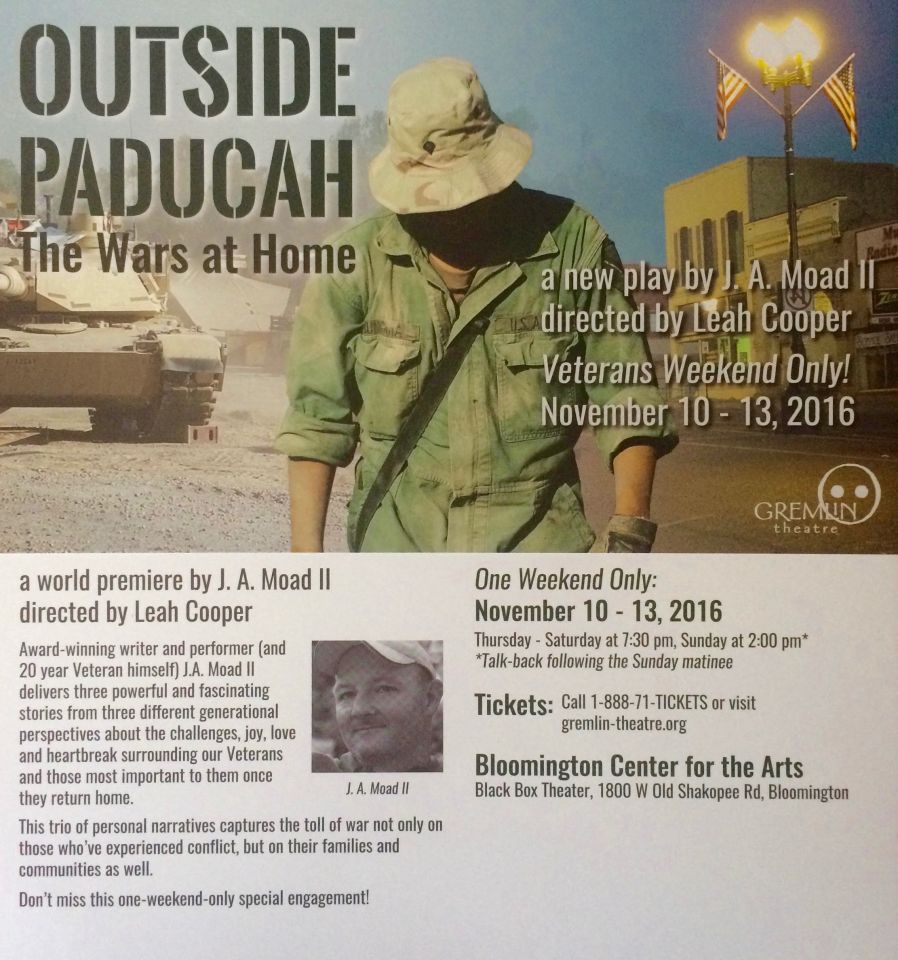 I've walked the blood soaked fields of Europe, the memory of the great squandering of men alive in the memorials and cemeteries. I've felt their presence, closed my eyes and listened to the voices of the dead: Prepare your fields for the next generation of memorials and cemeteries. Monuments to the ignorance and indifference of our time. For each war begets the next.

And so I write—one of many veteran writers today—lost in the shadow of conflict, this story of now, a century since that Great War engulfed the world. We, the people, our pens inked in the blood of soldiers and civilians, guilty and innocent, Muslim, Christian and Jew, the poor and privileged, young and old, the police-terrorist-white-black-brown-refugee-immigrant-protagonist-enemy-hero-villains everywhere. Us and them, you versus me, imagination struggling against fear. Nothing new to impart. The same old lies ignite into deception, burning inside the language of division as our insecurities explode into anger.

Are we to bleed another violent chapter onto the pages of history, a war story at home and abroad? Must we surrender to the fisted calls for retribution, weapons and walls—suppress, invade, persecute and destroy? Is this to be the story of our time, our children's children recounting these days in decades to come? What will they say of us? That we failed to imagine the consequences? Couldn't recall or see what the dead have taught us? No. Together, we must write a new story. A story where wisdom guides us in the face of uncertainty, one of courage in the face of condemnation, a foundation for tomorrow where we heed the voices of the past—a story to guide generations to come. This MUST be the story of our time.

Header for journal War, Literature, and the Arts, an international journal dedicated to the artistic representation of war and military issues. James Moad is fiction/drama editor and blogger.

J.A. Moad II is former Air Force pilot with over 100 combat sorties in the C-130. He served as an English Professor at the United States Air Force Academy and continues to serve as a fiction editor and blogger for their international journal, War, Literature, & the Arts (WLA). His short stories, poetry and essays have appeared in a variety of journals and anthologies, including winning the 2014 Consequence Magazine Fiction Award. In addition to writing, he has performed on stage at the Library of Congress and The Guthrie Theater as part of The Telling Project -Giving Voice to the Veteran experience. He performed a play he wrote, Outside Paducah - The Wars at Home in November, 2016 in Minneapolis, MN. He currently resides in Northfield, MN, and is busy editing a novel about an American military in a not too-distant future.

I enjoyed this post a lot. The WW1 and WW2 burial grounds in France are sobering places. My first reaction to them is always that the war dead are nearly all so young. Every politician, in-office and prospective, should have to be taken on a...

I enjoyed this post a lot. The WW1 and WW2 burial grounds in France are sobering places. My first reaction to them is always that the war dead are nearly all so young. Every politician, in-office and prospective, should have to be taken on a conducted tour of some of these sites, including attending a "Sunset" ceremony at the Menin Gate. Perhaps, this would make them less inclined to send other people's sons and daughters, husbands and wives, fathers and mothers, to serve in another war in some distant country.
This September will see the 100th anniversary of the death in WW1 of the grandfather that I and my siblings never knew. He was a teacher at a deaf/mute school in Edinburgh who joined the reserve Army in 1913. He volunteered for foreign service and joined the 9th battalion, The Royal Scots, as a private. In Dec 1914 he was commissioned 2nd Lt., and served with the Expeditionary force from Jan 1917 in France, was wounded in action at Arras on 9 April, promoted to Lt. in July and was killed in action in the mud of "3rd Ypres" 20 Sep. 1917, in what was "Paschendaele". In action during the battle of Menin Road, he was struck by machine gunfire. His C.O. wrote:"His behaviour was extraordinarily gallant on that morning, for though wounded twice he continued to lead and encourage his men until he was hit by a machine-gun bullet, while carrying forward a Lewis Gun to support the Battalion on our left". Due to the pace of the fighting he was buried where he fell, but we do not know where that is.
A fragment of the life of another ordinary but brave man among millions of others like him who did not return from "The War to end all Wars".

Read More
Nick Lutwyche
There are no comments posted here yet