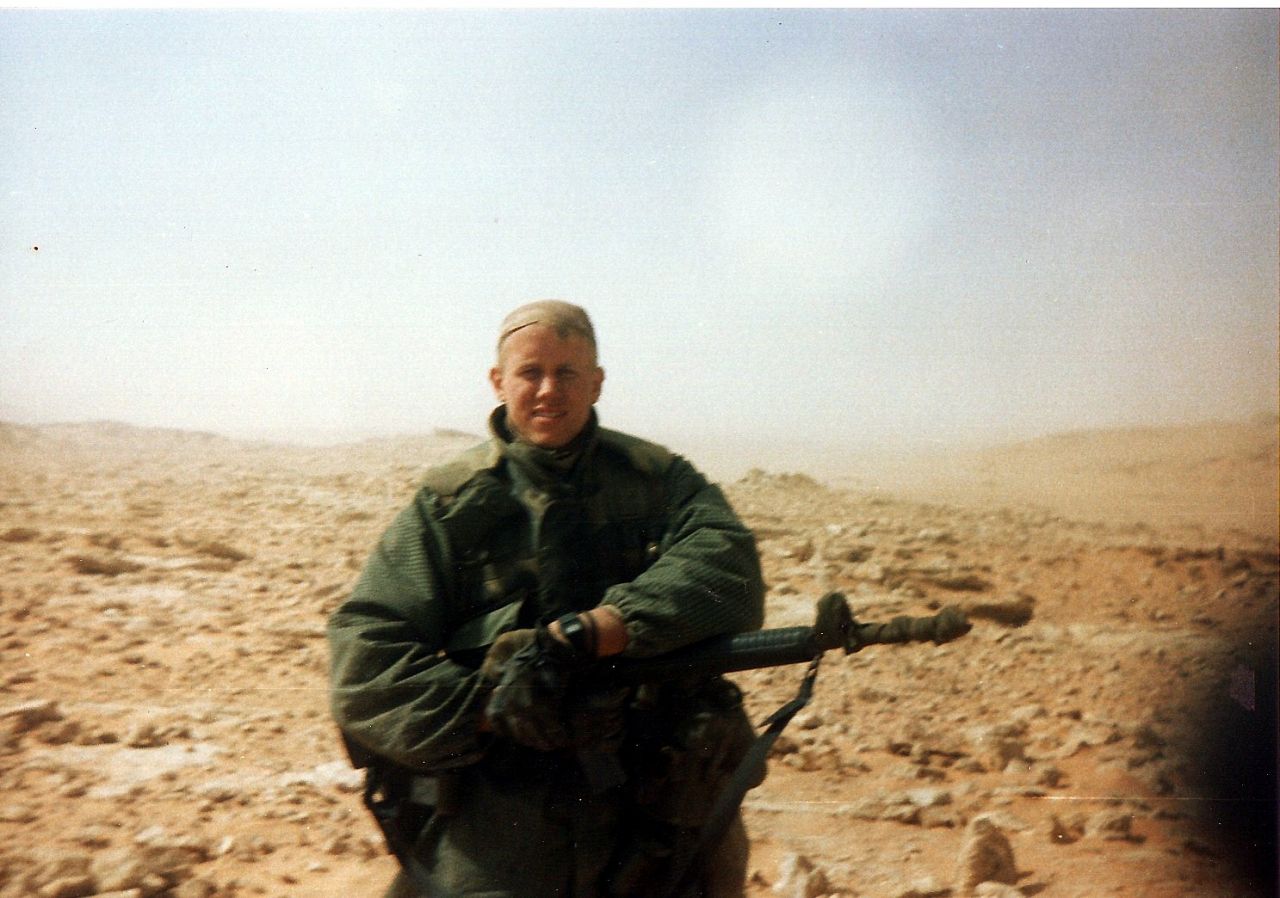 Seth Brady Tucker explains influence of WWI poetry on his own writing about veterans of contemporary wars. 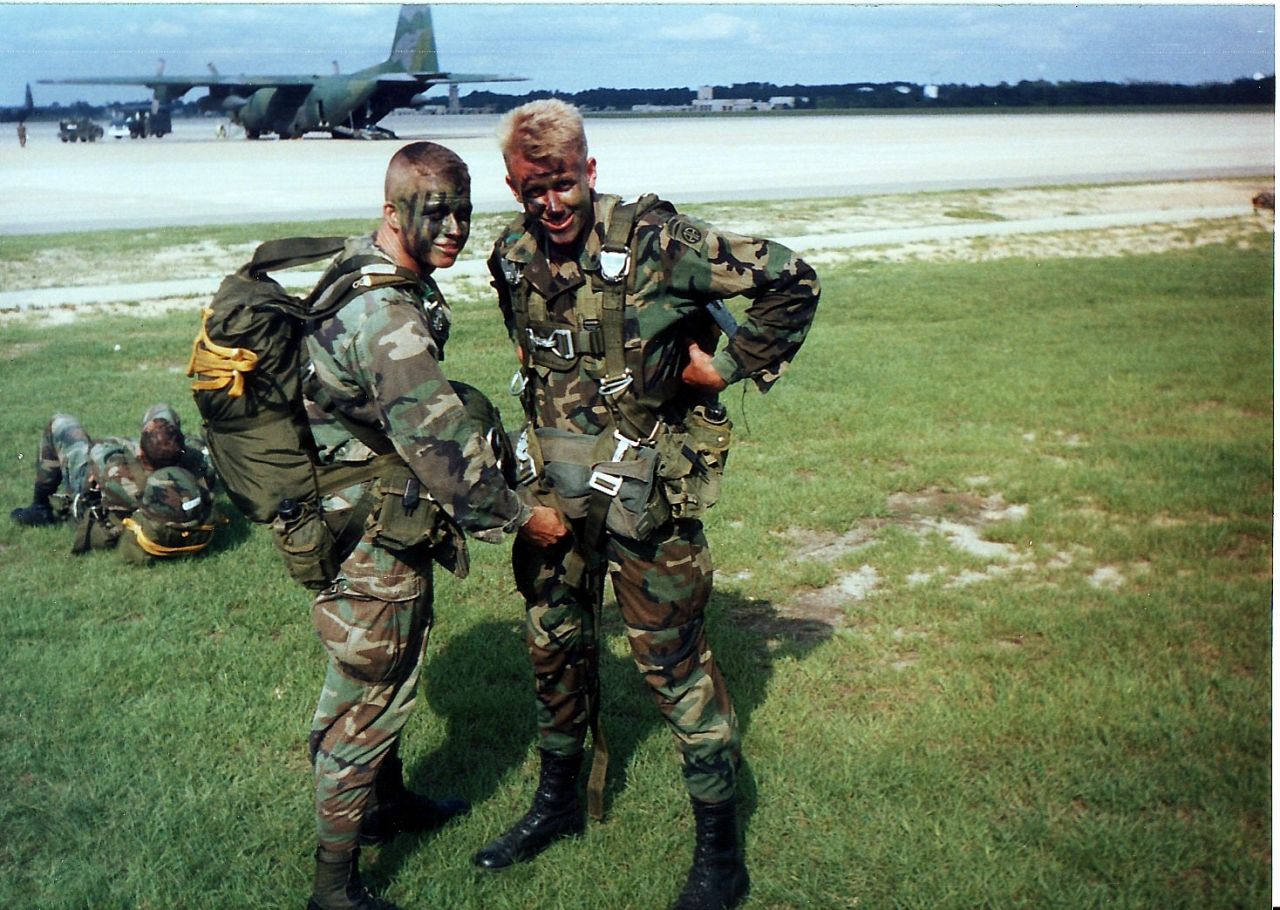 Seth Brady Tucker with fellow soldier during Gulf War, 1990-1991.One of the first war poems I ever read, like most people, was "Dulce et Decorum Est" by Wilfred Owen.I read that poem in a foxhole during the First Persian Gulf War, and I did not have a way to translate the title or the last line, but I guessed, incorrectly, that I knew at that point the suffering all soldiers must endure.I too recognized the flurry of activity that went with the yell of "gas!" and I knew what nerve agents would do to us, and the word on the street was that the 82nd Airborne would be going head to head with the combat-tested Republican Guard in Iraq, so I thought I knew what it might mean to die as dirty and smelly and lonely, and young, as I was then.

It was also not lost on me that I was a soldier, like Owen, and like him, that I also fancied myself a poet.It was like looking in the mirror, for just a brief moment.I remember the mindless connection I felt with Owen—we were both war poets, and like him, I would write poems that would speak over generations to future soldiers.What I did not know then was this:he had died during WWI, a hero and a poet, but a dead one. I had another mindless reaction when I discovered this:I did not want to be like Wilfred Owen.

So I started reading Siegfried Sassoon, Mary Borden, E.E. Cummings, Ford Madox Ford, Rainer Maria Rilke, Robert Service, Gertrude Stein, then the WWII poets, all the way up to our contemporaries.Some of these war poets survive, some of them do not.Some are brave in combat or service, some are not.All of them, however, are brave in words.In this, they did not shirk their responsibilities, in this they did not turn away from the horrors, the obscenity, the awful trench warfare that gifted some of them to us as martyrs, returned some of them to us broken and ill-used but willing to speak of war honestly. 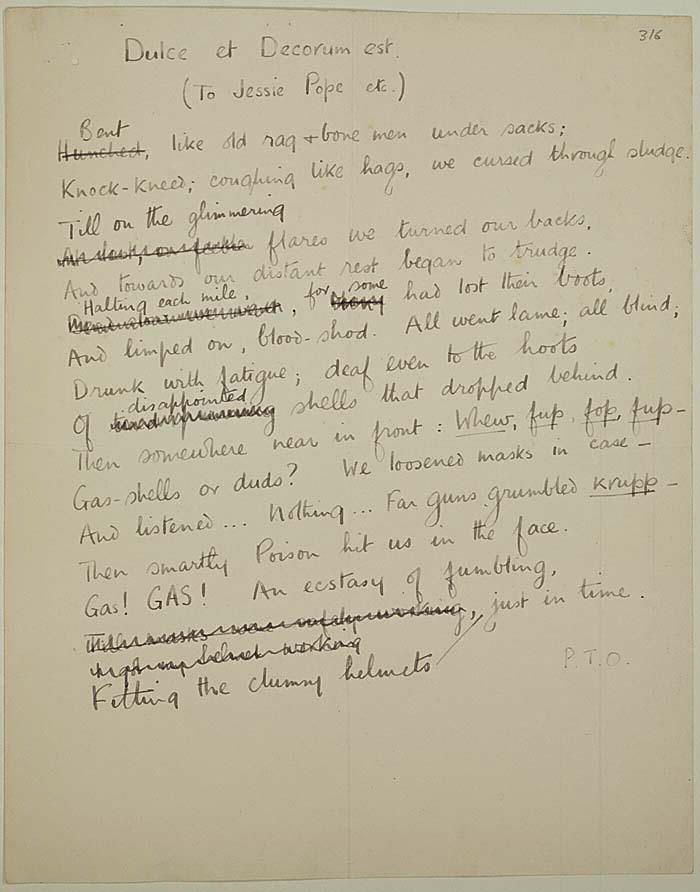 Manuscript of Wilfred Owen's poem "Dulce et Decorum Est," one of the most well-known poems of WWI literature. Owen was killed in action one week before the Armistice was signed in 1918.Their voices are trapped for us in poems that have lasted a full hundred years, and will be there for our ancestors a thousand years from now.As a poet who writes about soldiers and war, I doubt I will get that sort of billing—no one will remember my war but the economists and historians, examining the fall of a great empire—but every word I write carries with it, I believe, all the heavy burdens of those like Owen, who were stripped of their right to question the morality of the wars in which they fought.I consider myself lucky that I am allowed this luxury—in my mind, WWI snuffed the life from Owen, a poet who would most likely have become the world's most famous poet—just imagine writing some of the most recognizable poems the world has ever known, over the course of a year in combat, at the age of twenty-four.It is astounding.

So, I write about soldiers and war, and I do this with as much humility as I can muster—my hope that I can honor those who came before, walking the wide road they have broken for us, while blazing a trail, however narrow, for those who will follow. 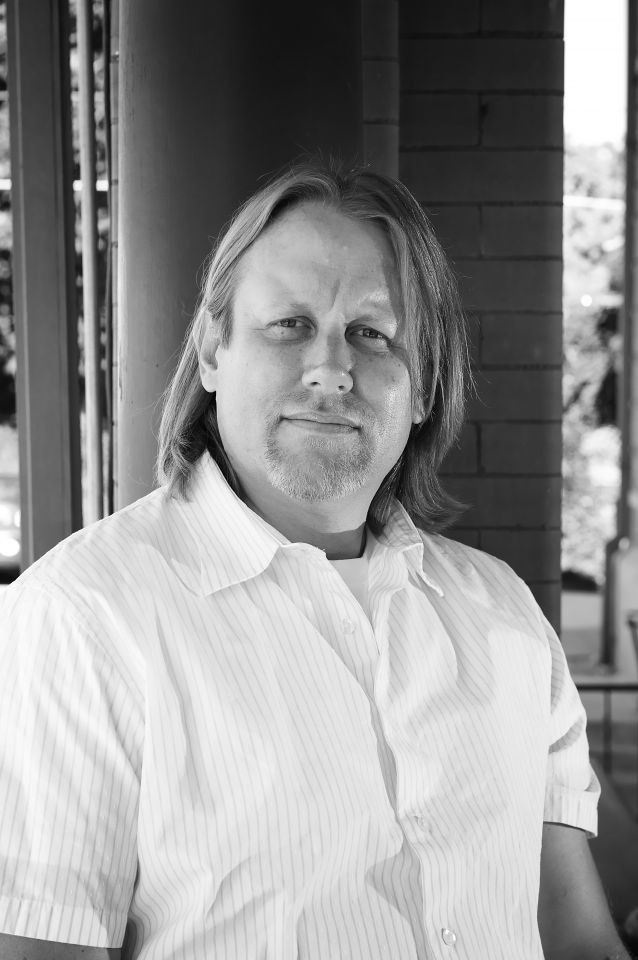 Seth Brady Tucker's second poetry collection, "We Deserve the Gods We Ask For (2014)," won the Gival Press Poetry Award and in 2015 it won the Eric Hoffer Book Award. His first book, "Mormon Boy," won the 2011 Elixir Press Editor's Poetry Prize (published in 2012), and was a Finalist for the 2013 Colorado Book Award. Most recently, he was a finalist for the Narrative Magazine Story Prize, and in 2015, his fiction was a "Special Mention" for the 2015 Pushcart Anthology (Iowa Review, "The Mountain Man's Relativity Theory"). He has also won the Shenandoah Bevel Summers Fiction Prize and the Literal Latte Short Fiction Award. His poetry and fiction has been published in such magazines and journals as the Iowa Review, Shenandoah, Poetry Northwest, Verse Daily, Apalachee Review, River Styx, Chattahoochee Review, storySouth, Crab Orchard Review, among many others. Seth is founder and co-director of the Seaside Writers' Conference, and he has served as the Carol Houck Smith Poetry Scholar at Bread Loaf, and the Tennessee Williams Fiction Scholar at Sewanee. Seth has degrees in English Literature and Creative Writing from San Francisco State University, Northern Arizona University, and Florida State University (PhD, 2012). Currently, he teaches poetry and fiction workshops at the Lighthouse Writers' Workshop in Denver, at the Colorado School of Mines, and he is the senior prose editor for the Tupelo Quarterly Review. He is originally from Wyoming, and served as an Army 82nd Airborne Division paratrooper in the Persian Gulf.

Mervyn
This comment was minimized by the moderator on the site

Thank you for sharing. I look forward to reading more of your work. My late grandfather, Charles Hilliard Lockhart, served with the Canadian forces in WWI. He always carried 3 pocket-sized poetry books by Robert W. Service. They are very worn and...

Thank you for sharing. I look forward to reading more of your work. My late grandfather, Charles Hilliard Lockhart, served with the Canadian forces in WWI. He always carried 3 pocket-sized poetry books by Robert W. Service. They are very worn and yellowed, evidence of how much he read them. Poetry catches the reader, ignites thoughts and engages the reader in a unique way...truly a gift that lasts forever.

"All of them, however, are brave in words." Succinctly, perfectly put. Thanks, Seth. Very nice piece. Mark

And isn't ironic that you were off fighting in a country that was poorly cobbled together as a result of the end of the Great War? Thanks for your article, I look forward to reading more of your work.

Jennifer
This comment was minimized by the moderator on the site

Jennifer
There are no comments posted here yet