News Items from this Week 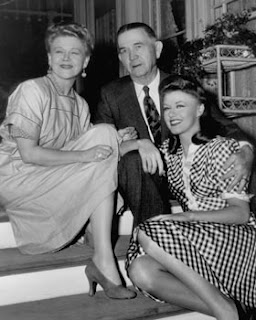 Citizen Artists: World War I and the Creative Economy Symposium, March 11-12 Citizens create and write! This week, the 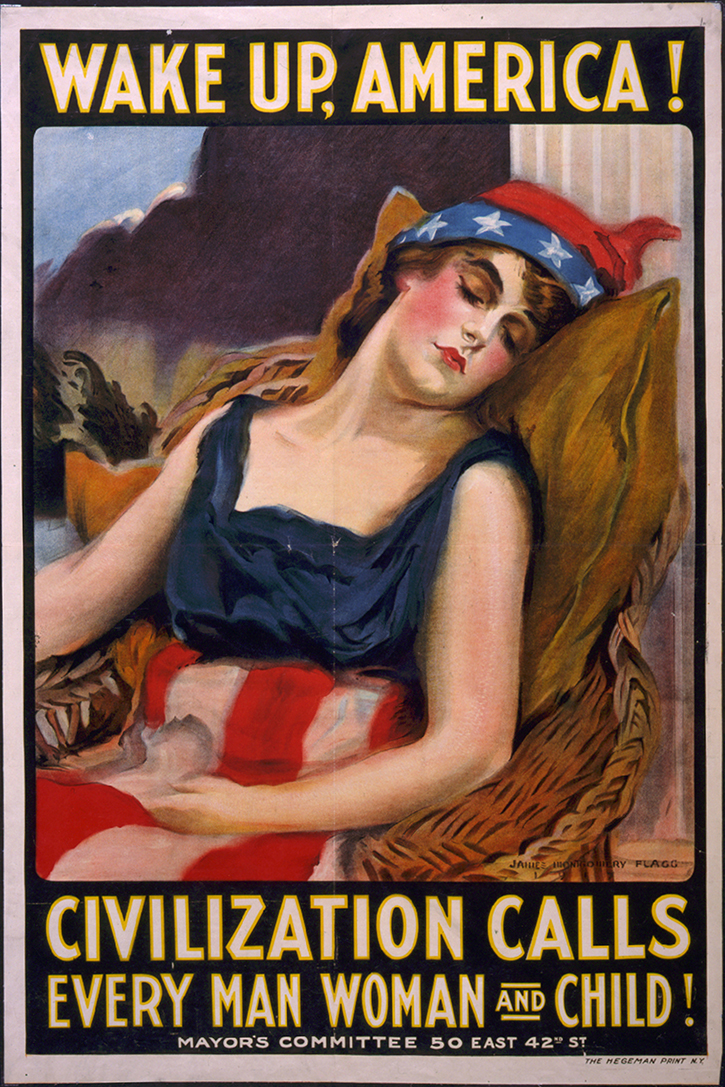 WWI Wake Up America Poster Centennial Commission announced this 2-day symposium, held by The Library Company of Philadelphia and the Pennsylvania Academy of Fine Arts, which is on its second day of examining the creative contributions of American artists and citizens before, during and after World War I.  Conversations  consider the relationship between military conflict and visual culture, the deployment of everyday citizens in the pursuit of national agendas through art and art-making, evolving racial and gender roles, and the interminglings of memory and mythology in understanding our own history.  Tours with local cultural partners expand the conversation into other disciplines through the examination of special World War I related collections around the city in smaller groups. Interested attendees had the opportunity to visit the Library Company and participate in a curator-led tour of the Together We Win exhibition from 4 to 5pm on Saturday. The Commission looks forward to hearing about the event's success soon! 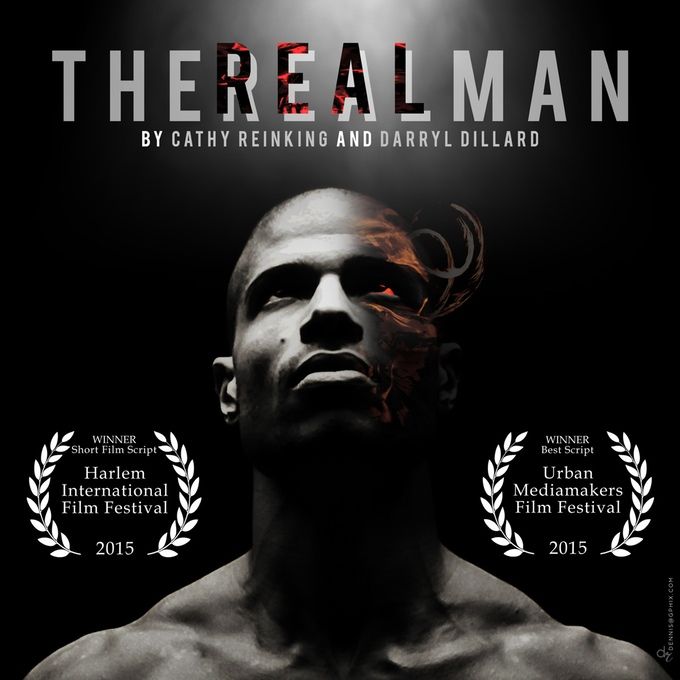 The Real Man, by WWrite Blogger Darryl Dillard Featured in Los Angeles Indie Film Festival. The Real Man, a film by WWrite blog contributor, Darryl Dillard and Cathy Reinking about the negative acting roles assigned to black men, made its way into the Indie Night weekly film festival in Los Angeles this week. As the only weekly film festival in the country, Indie Night’s residency is at the historic TCL Chinese 6 Theater every Saturday starting at 2:30pm. Paving the way for countless indie filmmakers, it not only gives them an audience for movies, trailers, TV series and webisodes, but it also offers an opportunity for industry professionals to view aspiring and established filmmakers’ hard work in action.

Founded by entrepreneur, Dave Brown, the weekly film festival is purposed to be an avenue by which all players in the filmmaking process can network. Brown’s love for linking likeminded individuals to each other lead him to do something about the disconnect he witnessed within the community. He made it his goal to fill the void by developing a reputable platform that serves as an incubator for Hollywood’s emerging talent. Uniting them with heavy weight movers and shakers, Indie Night is an organic movement that continues to give gifted filmmakers a chance to shine, all while cultivating professional relationships.

Indie Night is supported by individuals like Emmy award winning casting director, Robbi Reed, and director/producer John Singleton just to name a few of the people that have been apart of the weekly showcases. With a growing presence on the movie scene, Indie Night Film Festival is a one of the go-to events in Hollywood for filmmakers and lovers alike.

Darryl's blog post addressed negative WWI-era roles for black men in film, propaganda, and other media. While African Americans fought and died in WWI for their country abroad, they faced stereotyping and ridicule at home.

WWI and the Memory of Modern Words—The Origin of "Trench Coat." Words provide the raw materials for writers. Writing is painting, sculpting,

Yves Saint Laurent Trench Coatdrawing, composing, arranging, performing, and dancing—with words. An understanding of a word's origin and present usage is essential for constructing writerly works layered with multiple sensations and meanings. WWI, like many wars, became the birthplace for phrases still in use today. The Civil War gave us "deadline" and "sideburns." WWII provided "snafu" and "blitz."  We inherited "over the top" and "tank" from WWI's "trench talk." Of course, these expressions have taken on different meanings as they've evolved—"over the top" today means "excessive," not surging out of a trench into no man's land to a possible death. Yet knowing the phrase's origin creates the possibility of transforming an everyday conversation into a strange but poignant act of historical remembrance. With this knowledge, imagine if a friend says  "That outfit was so over the top." His or her suit is no longer just outlandish. It becomes the marker of the often-fatal move a WWI soldier had to make in a combat zone—an expression of fear and doom. A life at stake. Odds of surviving going "over the top" were estimated to be around 1 in 5. 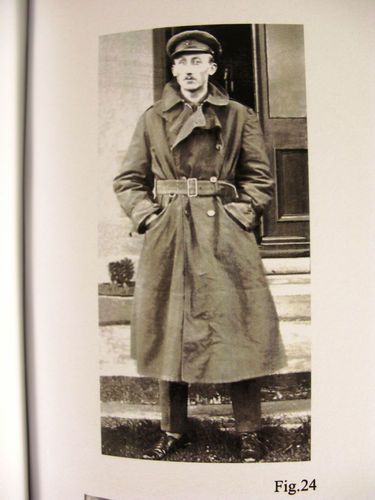 Trench Coat WWILike with the English language, remnants of expressions coined during WWI haunt contemporary French, which was a topic for a morning newspaper article this week in Lyon, a large city in southeastern France. CNNEWS MATIN featured the history of the trench coat. Considered today as a basic wardrobe piece, the trench coat wasn't always available to everyone. In 1914, the famous designer, Thomas Burberry created it for WWI British officers. Falling just to the knee, the coat protected uniforms from the mud of northeastern France's rainy climate. It worked so well, most of WWII's soldiers got to wear one. After the war, civilians began wearing them too. In the 1960s, French designer Yves Saint Laurent popularized the trench coat when he introduced it in his collections for both men and women. The literal French translation for trench coat is "manteau de tranchée;" however, the French call it simply a "trench" (yes, pronounced with that guttural r). To an English native speaker who speaks French and who knows about WWI history, the modern usage of this anglicism sounds doubly bizarre. "Je porte un trench," (I am wearing a trench coat), comes across as "I am wearing a trench." "Tout le monde porte un trench" = Everyone is wearing trench coats. "Mets un trench avec cette robe" = Wear a trench with that dress. Do you prefer brown or black trenches? A trench will protect you from the rain. It's not cold enough for a trench. Stay in your trench because it's cold out.

WWI Centennial Commissioner, Monique Seefried, said in a recent Centennial Commission interview with Chris Isleib, Director of Public Affairs, about marking the 100th anniversary of America's entry into WWI on April 6, 2017: "WWI was the shaping event of the twentieth century. It created a completely different world order, breaking up European dominance in the world, giving birth to communism and fascism and the horrors of Nazism and Stalinism. We live to this day in the shadows of the Great War, and the conflict zones of today in the Balkans, the Ukraine, and the Middle East and the South China seas are direct consequences of World War I." Words and expressions created in war survive and carry war's memory even though their meaning changes over time. Getting in touch with their linguistic origins can bring WWI's lingering, almost-forgotten but essential history into sharper focus, especially as the Centennial approaches in 2018.