Perhaps crouched in a mud-filled trench waiting for H-Hour (the term was first used in the battle), John Wickersham wrote his last letter home. In the note to his mother, he included a poem, most probably untitled. By the time his mother received his letter, her son was dead. The poem first appeared in a small Oregon newspaper the St. Helen’s Mist on 13 December, 1918. The paper noted that the author had been killed in battle and gave it the title “Its Patter Touches the Heart”; Wickersham's aunt and uncle had shared the poem. In later anthologies, the poem appears as “Raindrops on your old tin hat.”

The mist hangs low and quiet on a ragged line of hills,
There's a whispering of wind across the flat,
You'd be feeling kind of lonesome if it wasn't for one thing--
The patter of the raindrops on your old tin hat.

An' you just can't help a-figuring--sitting there alone--
About this war and hero stuff and that,
And you wonder if they haven't sort of got things twisted up,
While the rain keeps up its patter on your old tin hat.

When you step off with the outfit to do your little bit,
You're simply doing what you're s'posed to do--
And you don't take time to figure what you gain or what you lose,
It's the spirit of the game that brings you through.

But back at home she's waiting, writing cheerful little notes,
And every night she offers up a prayer
And just keeps on a-hoping that her soldier boy is safe--
The mother of the boy who's over there.

And, fellows, she's the hero of this great big ugly war,
And her prayer is on that wind across the flat,
And don't you reckon maybe it's her tears, and not the rain,
That's keeping up the patter on your old tin hat? 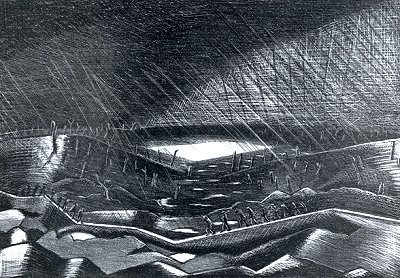 Rain Lake Zillebeke Paul NashMost likely written shortly before the battle, Wickersham’s poem addresses his fellow soldiers who wait with him in the rain. Confronting the likelihood of their own imminent deaths, the poem questions “this great big ugly war.” Contemplating heroism and the killing to come, it concludes, “you wonder if they haven’t sort of got things twisted up.”

Modestly, the poet states that as the soldiers “step off” together, each contributes his “little bit” as they simply do “what you’re s’posed to do.” As they attack under fire from the enemy’s machine guns and artillery, there will be no time to consider why they are fighting or what might be gained or lost. Instead, the men give themselves over to “the spirit of the game” and the camaraderie of their units. They play together and fight for one another.

And on the eve of battle, thoughts inevitably turn to home. Thousands of miles away, a mother waits in the heartland of America. She prays every night for her son and masks her worries and fear in “writing cheerful little notes.” Wickersham's poem, speaking to soldiers who endure rain, cold and ankle-deep mud, proclaims that the loved ones who anxiously wait are the real heroes.

Despite the ugliness of the war, the poet hears whispered on the wind the prayers of the soldiers’ loved ones, and the sound of the steady rain, rather than joining the men in misery, connects them with the tears of those who pray for their return. Wickersham was not one of those who made it home. 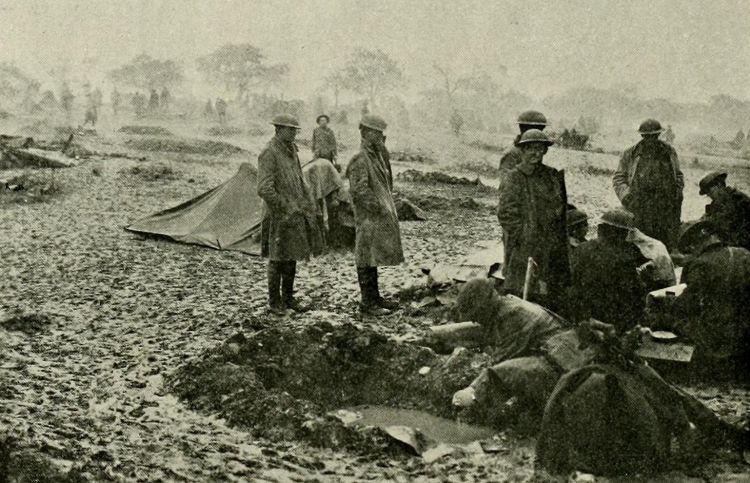 89th Division in rain
The historian of the 353rd Infantry Regiment (89th Division) writes of the events of September 12, 1918, the morning of the attack:

The Second Battalion, scheduled to make the assault on the following morning, moved during the night from the support positions along St. Jean-Noviant road to the jump-off line out in “No Man’s Land.” There crouched down in the mud-filled trenches with thousands of fellow Americans, we waited for the Zero hour.  All surplus clothing except raincoats had been stored and it seemed that Zero was upon us while we shivered and waited for the hour. Officers, non-commissioned officers, and runners continued to be busy.  In fact, there seemed to be plenty for everyone to do. It was impossible to remember all the instructions. One warning, however, struck fast—“No one goes to the rear.”

… At exactly one o’clock the preparatory bombardment began.  More than a million rounds of ammunition were consumed in the artillery preparation which lasted from 1 am to 5 am.  All along the line the sky was lit up with flashes of heavy-caliber guns, distributed in depth for almost ten kilometers to the rear. In the intermissions between deafening explosions could be heard the puttering of machine guns.

[Sept 12th]…Some losses occurred, too, from our own artillery.  “Follow the barrage,” were the orders. As soon as the barrage had lifted from an objective ahead the men moved up, not realizing that the artillery would roll back almost to their own position before moving forward again to the next objective. As a result, Lieutenant Shaw was the victim of one of our own shells a minute after he had led his platoon out, but his example carried the men forward without their commander and in spite of many losses.  While Lieutenant Wickersham was advancing with his platoon, a shell burst at his feet and threw him into the air with four mortal wounds.  He dressed the wounds of his orderly, improvised a tourniquet for his own thigh and then ordered the advance to continue.  Although weakened by the loss of blood, he moved on with his pistol in his left hand until he fell and died before aid could be administered to him.  Everywhere action was heroic.  Resistance and difficulties only brought it into the sublime.”

By the end of the first day of the St. Mihiel offensive, the 353rd had lost nearly 250 men, 39 having “made the supreme sacrifice.” For his actions on September 12th, John Hunter Wickersham was posthumously awarded the Medal of Honor. He is buried in France at St. Mihiel cemetery. 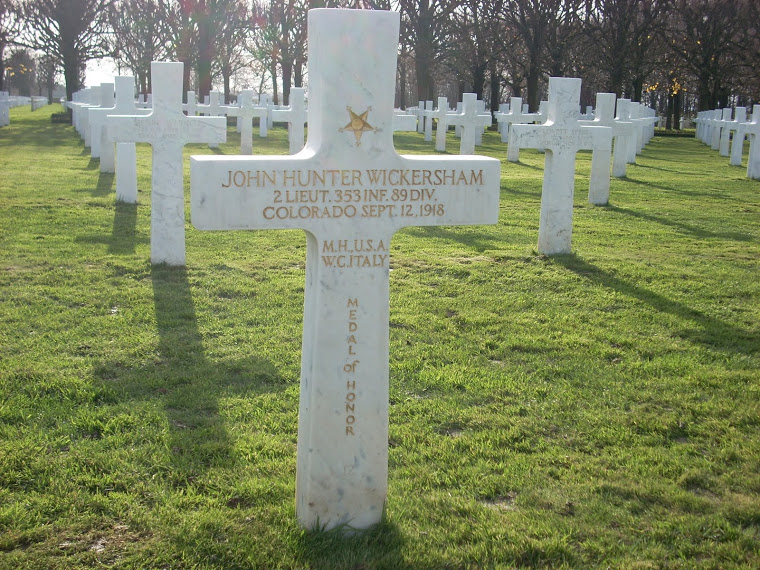 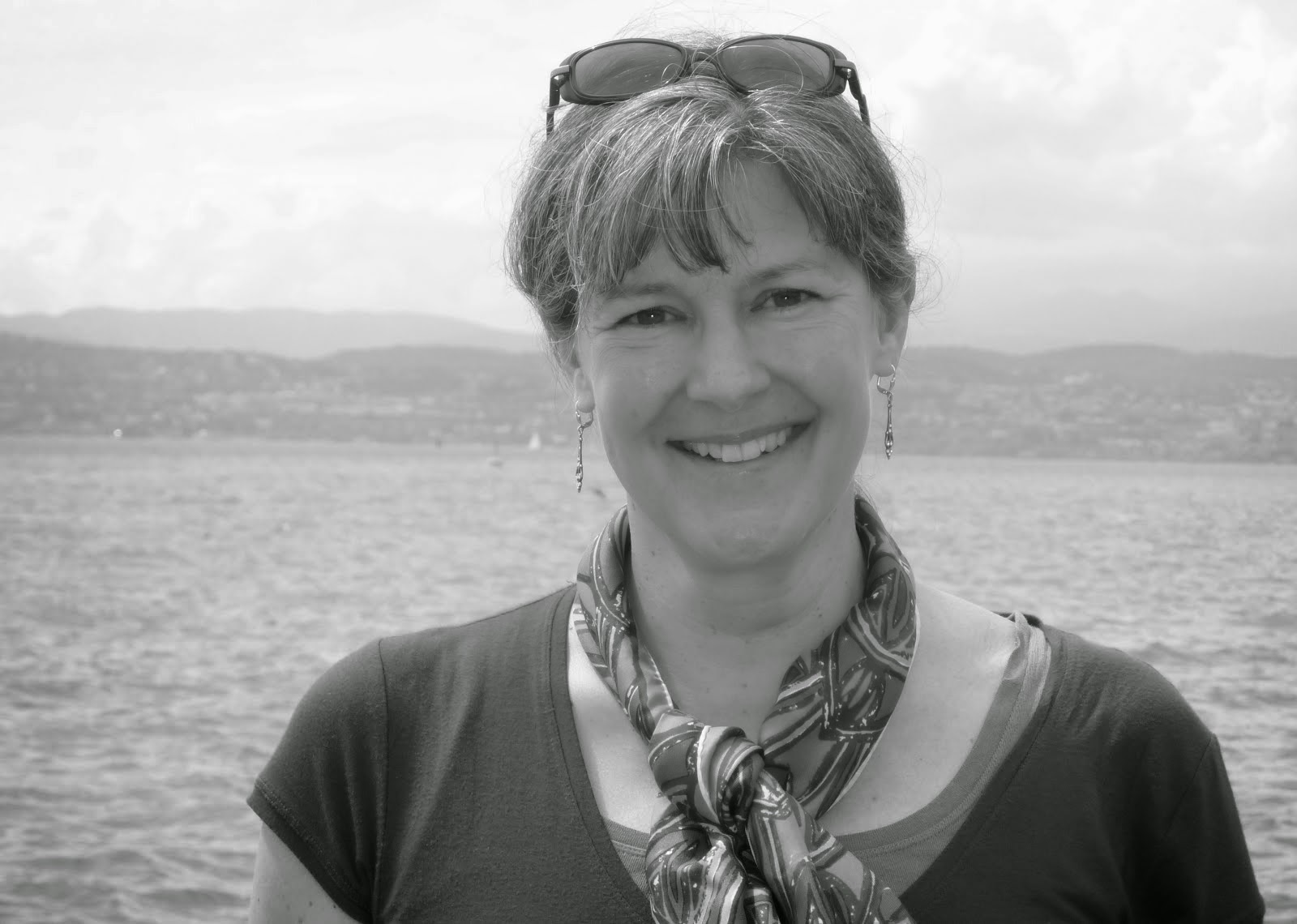 Connie Ruzich is a University Professor of English at Robert Morris University near Pittsburgh, Pennsylvania. She has published on aspects of language, culture, and identity, and has lived and taught in the U.S., Italy, and the United Kingdom. Ruzich was a 2014-2015 Fulbright Scholar at the University of Exeter, where she researched the use of poetry in British centenary commemorations of the First World War. Her blog, Behind Their Lines, shares lesser-known poetry of the First World War, providing discussion and research on international lost voices, poems written by those on the home front, and poetry that has been neglected in modern anthologies. Her research can also be followed through her twitter feed (@wherrypilgrim). ​

Dr. John A. White
This comment was minimized by the moderator on the site

The poem "Raindrops on your old tin hat" is a testament to the sacrifice made by the American 'Doughboys' involved the terrible conflict of WW1 and truly deserves a place among the forgotten USA poets of this era. Thank you for this contribution...

The poem "Raindrops on your old tin hat" is a testament to the sacrifice made by the American 'Doughboys' involved the terrible conflict of WW1 and truly deserves a place among the forgotten USA poets of this era. Thank you for this contribution from an old former UK Fulbright Alumnus.

Read More
Dr. John A. White
There are no comments posted here yet