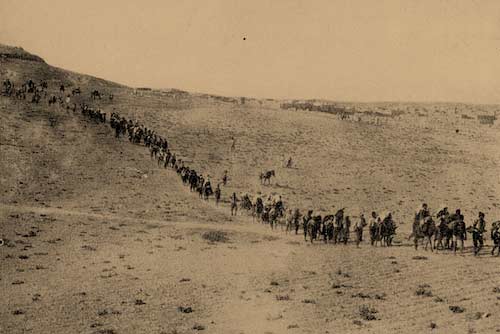 Archival Fellow for Armenian Advocacy
Attention! This application deadline is next Monday, September 4, 2017!
It is hard to believe that, as barbarous battles raged on the Western and Eastern Fronts, another, different human atrocity was committed by Ottoman authorities and Young Turks around the geographical region of modern-day Turkey: the Armenian Genocide. To understand the Armenian Genocide and its place in WWI better, The Robert and Elizabeth Dole Archive & Special Collections at the Dole Institute of Politics*, University of Kansas in Lawrence, is pleased to announce a special fellowship opportunity for the 2017-2018 programming year: the  Archival Fellow for Armenian Advocacy. 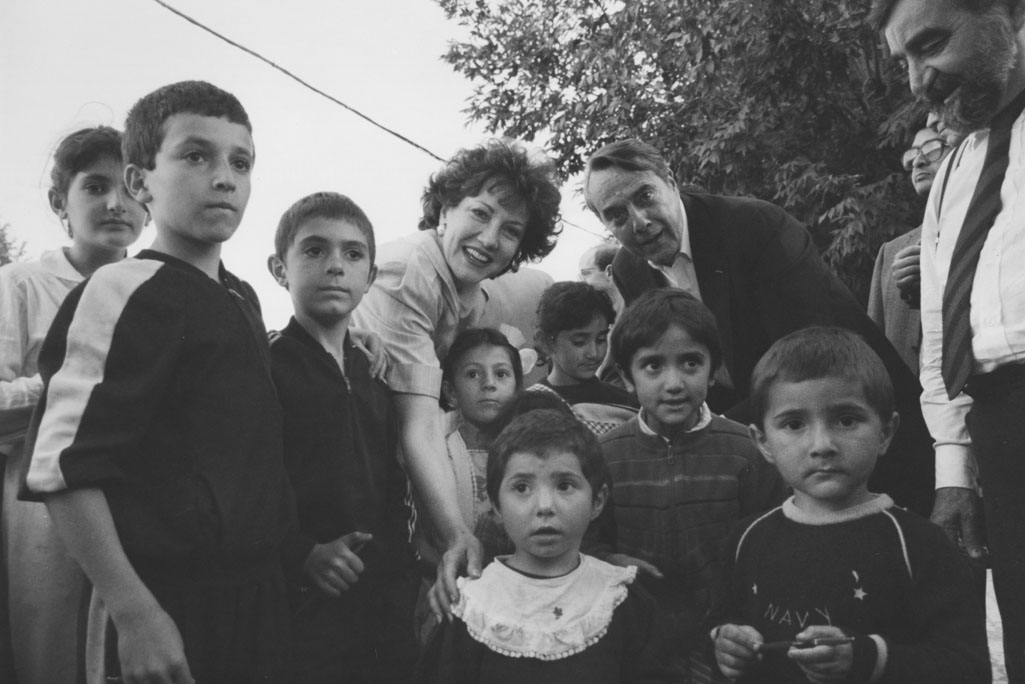 The Doles visit Armenia, 1989Gravely wounded in the mountains of Italy in the final weeks of WWII, Bob Dole endured several years of intense rehabilitation. He credits his physical and mental recovery largely to Dr. Hampar Kelikian, an Armenian surgeon who lost family members to the Armenian Genocide before fleeing to the U.S. As a soldier, citizen, and US Senator, Bob Dole has been a champion for Armenia, a role that includes seeking official U.S. recognition of the 1915-1916 Armenian Genocide. During the Centennial Commemoration of WWI, both the history of Armenian Genocide and Senator Dole’s advocacy for its recognition can inform our responses to contemporary crises. The Archival Fellow for Armenian Advocacy will help us understand the depth of our holdings, put them in context, and assist Dole Archives staff in creating a resource module for this topic, ultimately as an introductory resource on the topic for a general audience.

The extensive leadership careers of both Senators Dole and the documentation of their political and civilian activity make our collections a key resource across subjects and academic disciplines, including literature, history, government, politics, leadership, democracy, and the broader American experience.

Our programs are intended to stimulate interest in historical topics relevant to our collections, not just by graduate and post-graduate researchers, but also undergraduate, K-12, and general public audiences.

Recent and future projects connect our collections, which emphasize the latter-half of the 20th century, to projects on all historical periods – including WWI. 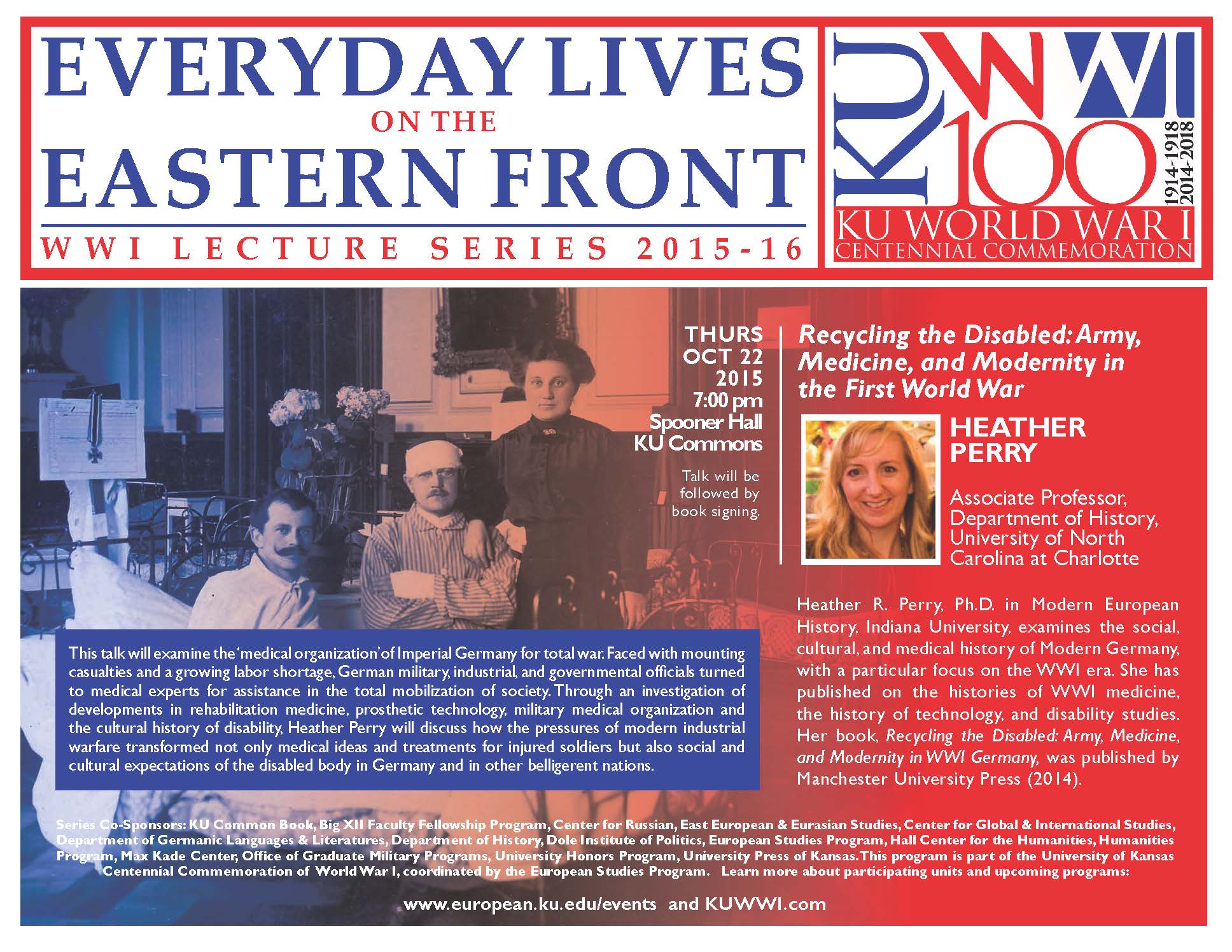 For example, in 2015, with support by KU’s WWI commemoration committee, the Dole Archives hosted KU Visiting Professor Heather Perry from the University of North Carolina-Charlotte, who led a group of undergraduate students in an examination of historical materials related to her own scholarly project, "Recycling the Disabled: Army, Medicine, and Modernity in the First World War." The students compared WWI-era materials with archival materials pertinent to veterans of WWI and to disability during the Senator’s legislative career, 1960-1996. Perry’s visit coincided with the Dole Institute’s commemorate Americans with Disabilities Act (ADA) programming in 2015-2016, recognizing the 25th Anniversary of the 1990 ADA, one of Senator Bob Dole’s signature legislative initiatives.

Dole Archives Beyond WWI
The Dole Archive is eager to connect with external audiences on many subjects. Visit our department website for more on our collections, including more than 20,000 pages of keyword, searchable digitized primary sources, learning modules, and lesson plans. Click here for more information.

Congressional Collections Nationwide
Like the Dole archival collection, other Congressional archives, many with important research potential, can be found in various repositories across the country, not just in D.C. As with all archival collections, the extent and content vary widely, but these large and wide-ranging collections are worth considering for WWI-related studies – whether or not they are contemporary to the events of WWI.

Comprised of the working papers – unofficial documents, not to be found anywhere else – belonging to members of Congress, they are a window into the processes of our democracy and a reflection of our nation’s values at any given moment. As Raymond W. Smock, former historian of the US House of Representatives and director of the Robert C. Byrd Center for Legislative Studies eloquently stated in remarks made in 2014:

“We can use the records of Congress to create a portrait of the collective political, social, economic, and cultural situation through the papers of the members who have served. Congress may best be studied by turning the mirror around and not looking for a single face, but the face of the nation at any given time as seen through the records of Congress. . . Congressional history is not just politics . . . It has dimensions of every subject imaginable that relate to American history and world history.”

Is there a congressional archive near you? This index, maintained by NARA’s Center for Legislative Archives, is arranged alphabetically by state, then by repository. See this website to find one: https://www.archives.gov/legislative/repository-collections/state.html

Two national organizations devote themselves to teaching and learning based on congressional archives:

ACSC logoThe Association of Centers for the Study of Congress (ACSC) supports a wide range of programs designed to inform and educate students, scholars, policy-makers, and members of the general public on the history of Congress, legislative process, and current issues facing Congress.  It also encourages the preservation of material that documents the work of Congress –including the papers of current and former members of the House or Representatives and the Senate – and encourages making those materials available for educational and research use.

The Congressional Papers Section of the Society of American Archivists represents those who work with or have an interest in the papers of members of Congress and the records of Congress. The section provides a forum for news, for discussion of issues and developments, and for setting standards and advocating action in the preservation and management of congressional papers and records.

We look forward to working with you!

*Named for US Senator from Kansas Robert J. Dole, the Dole Institute of Politics is to promote political and civic participation as well as civil discourse in a bi-partisan, balanced manner. Through its robust public programming, congressional archive and museum, the Dole Institute strives to celebrate public service and the legacies of both Senator Bob and Senator Elizabeth Dole. 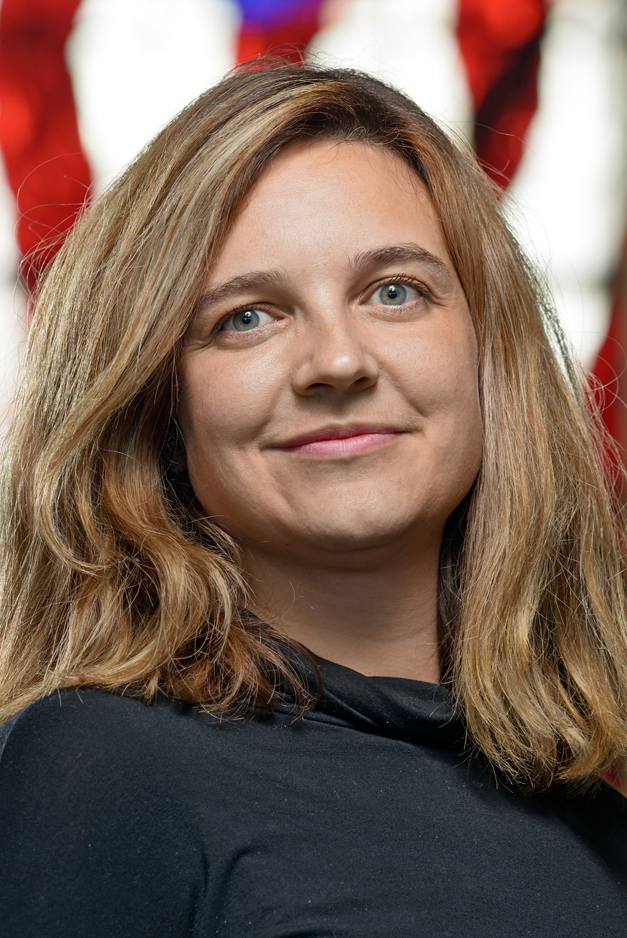 Audrey McKanna Coleman, C.A. is the Senior Archivist of the Robert J. Dole Archive & Special Collections and an Assistant Director of the Dole Institute of Politics. She has 15 years of professional experience in museum, archives, library, and visual resources fields, and is a lecturer in the University of Kansas Undergraduate Honors Program. Audrey has served on the Kansas Historical Records Advisory Board since 2013 and is a member of the 2016-2017 Kansas Humanities Council Speakers Bureau and Lawrence Central Rotary Club. Her book chapter, “Legacy, Leadership, & Collections: Programming in a Congressional Archive”, will be published by ABC-CLIO in the forthcoming New Directions in Special Collections: An Anthology of Practice, Lynne Thomas and Beth Whittaker, eds. in September 2016.

She has a B.A in Spanish and M.A. in Museum Studies, both from the University of Kansas.