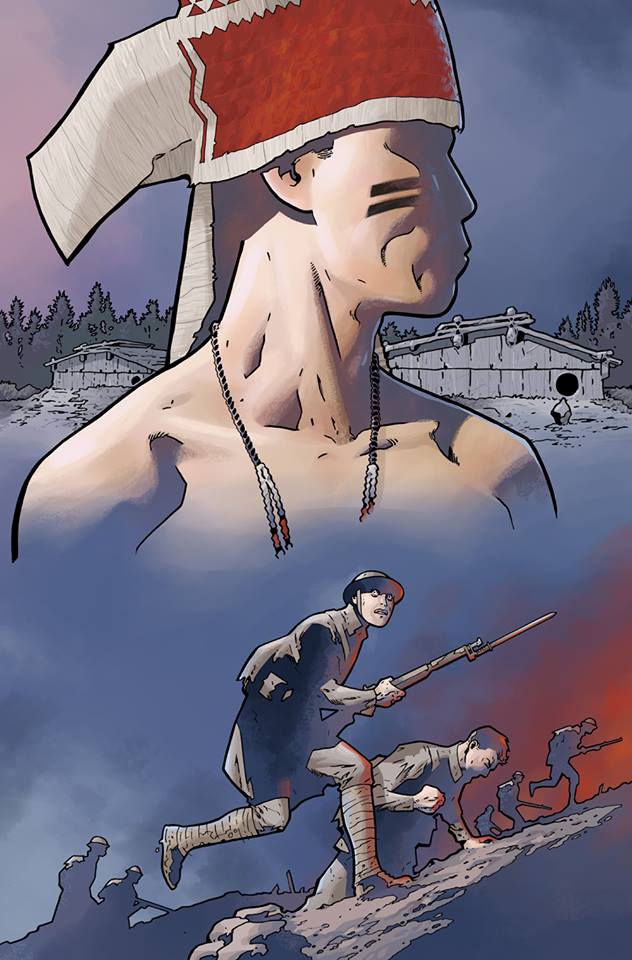 The World War I epic, Soldiers Unknown, is an original graphic novel written by Chag Lowry and illustrated by Rahsan Ekedal. This special project reveals the untold story of the native Yurok men who fought and died for the United States of America in the Great War. Conscripted from their tribal home in Northern California by a country they barely knew - to serve in a war they could hardly call their own - these young men nevertheless demonstrated immense courage and humanity on the battlefields of France in the Meuse-Argonne offensive. Chag Lowry is a historian and writer of Yurok and Maidu descent and has crafted a beautiful and poignant tale that Rahsan brings to life with images. 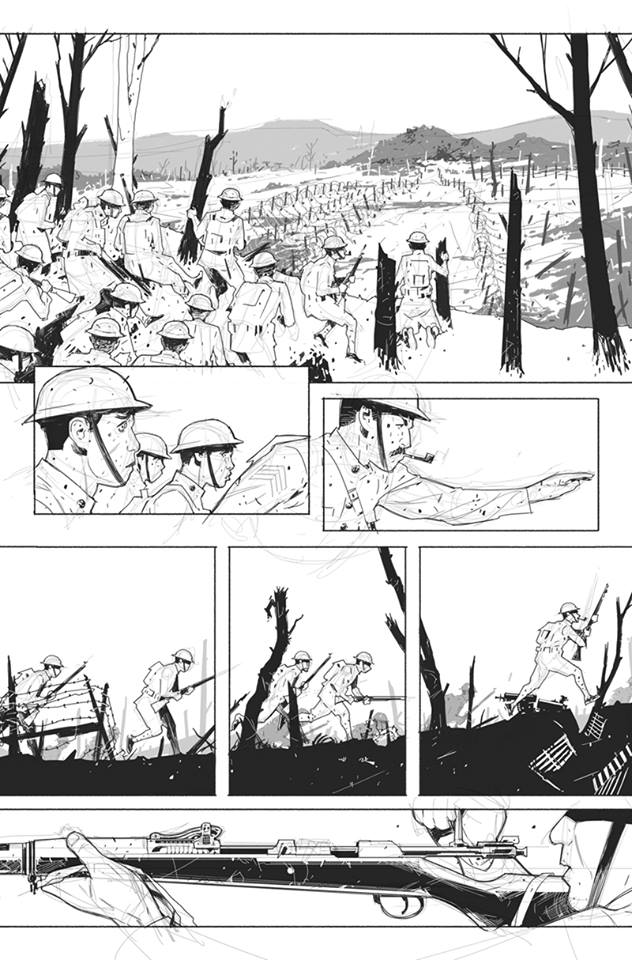 Frames from Soldiers Unknown. It will be published by Heyday in summer of 2018.

–Father, where did they go, and what did they see, these Yurok Native men who fought in World War One?

–The answers are there for us to find, son.  But the more important questions are how did they return home, and when did they find peace?

Crafting a World War One story with the very talented artist Rahsan Ekedal has been an emotional journey.  We’ve come a long, long way since I first discussed the concept with him back in 2016.  I was raised with many Native veterans from both sides of my family in northern California.  I always remembered the emotions of these men–many World War Two and Korean War veterans– when they told me about their fathers or uncles who had served in the Great War.

And that’s the story Rahsan and I try to tell– a story about emotions.  As a Native American, I wanted to create a graphic novel that conveys the experiences of the Great War through the sentiments of my people.  I had two Yurok great-great uncles who served in WWI and I’ve looked at their sepia-toned photographs for years wondering what they saw and felt.

The snippet of dialogue I shared at the beginning of this blog post encompasses the questions I’ve thought about regarding Native American veterans of WW1.  Our story begins in contemporary times with a Father and Son as they begin to talk about their ancestor’s involvement in the Great War.  Can culture help a combat veteran find peace and return to their homeland?  That is another question I’ve thought about, and it’s one I hope readers will discuss after they see our work.  We are using the lens of Yurok culture for this story to try to find an answer.  I’m very grateful to have such a respectful partner in Rahsan for this book.

The beautiful part of being able to work with a talented artist like Rahsan is that his images allow me to feel the full range of emotions as a descendant of WW1 veterans.  To teach young people about history we must first find ways to help them feel first and after lead them to discuss their emotions about what they are learning.  The graphic novel with its sequential art and impactful dialogue can do just that.  The act of breathing life into our characters in this story is meant to honor all WW1 veterans and their families.  Rahsan will fully color his work and this means our soldiers will be as alive today as in 1917-18.  We can share some of their journeys, and it does not matter what tribe or culture they are from.  We can feel who they are.  To most people, all World War One veterans are Soldiers Unknown.  I hope this work helps changes this. 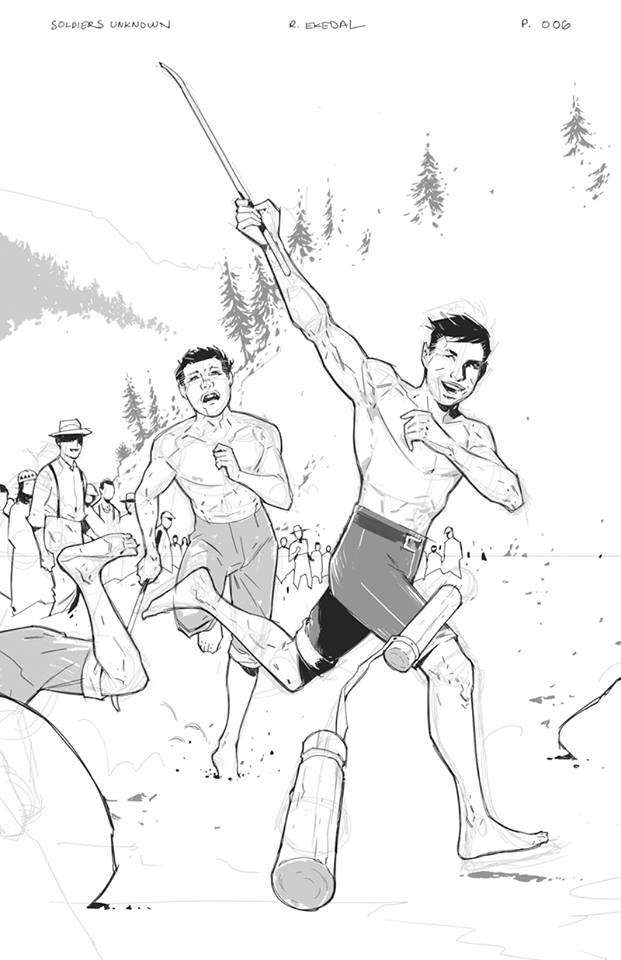 To hear more from Chag about Soldiers Unknown, read his interview with WWI Centennial Commission Director of Public Affairs, Chris Islieb, or listen to his talk with Theo Mayer in this recent WWICC podcast. 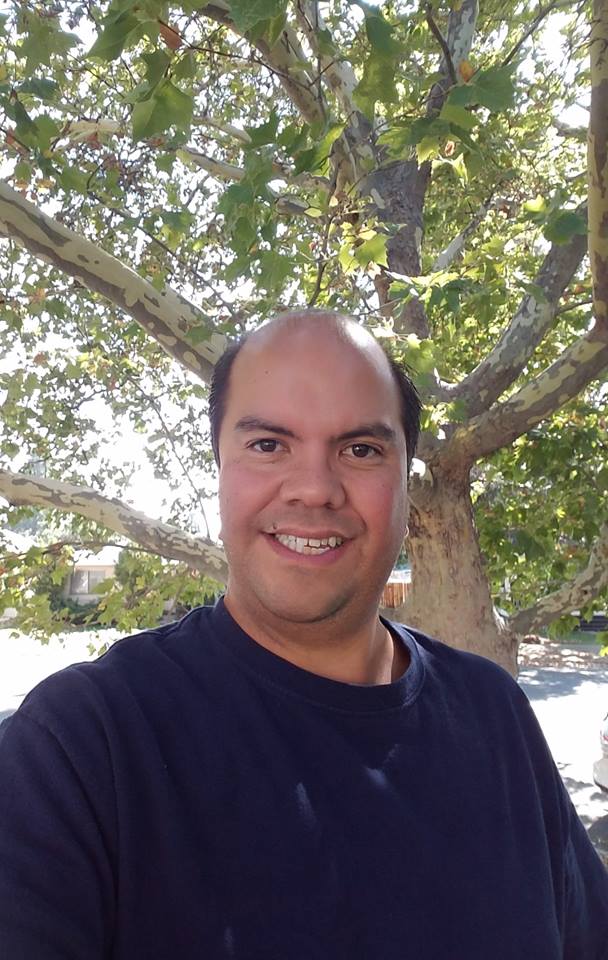 Chag Lowry is of Yurok, Maidu, and Achumawi Native American ancestry from northern California. He is the author of The Original Patriots: Northern California Indian Veterans of World War Two and has directed numerous PBS documentaries on Native veterans and cultures. He can be reached on Facebook.

In this photo, Chag is standing in his hometown of Susanville, California in front of a memorial tree that was planted in the 1920s to honor the late Thomas Tucker. Tucker was a Maidu man who died on September 28, 1918, in the Meuse-Argonne battle. He was in the 91st Infantry Division and was the first man from northeastern California to die in combat in WW1.