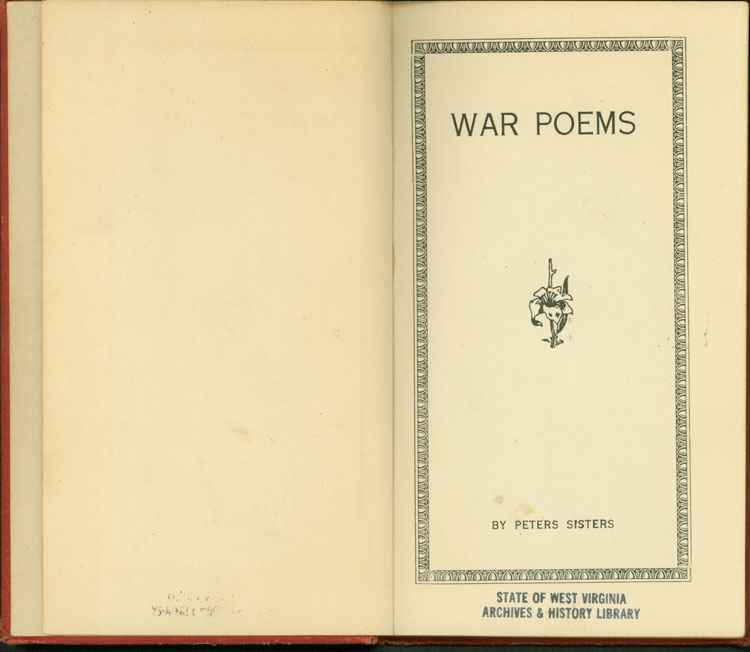 Courtesy of the West Virginia Division of Culture and History

* “I was in awe…because they were young. They were students, teenagers. But the more I thought about it, the more I realized that this was their way of contributing to the civil rights of their people. Having lived the life of a black person who had been segregated always, in my schooling, church, in every way—my neighborhood had no other people who didn’t look like me; my school was completely segregated—so the book, it really struck me…They knew what was happening to black people. And they saw fit to put it in writing.” — Jean Barnes-Peters, West Virginia native, owner of the book “War Poems.”

In the late 1970’s Jean Barnes Peters found a copy of War Poems sitting on a bookshelf in her house in Charleston, W.Va. The authors, Ada (17) and Ethel (18) Peters, were half-sisters to Jean’s husband, Joseph Cromwell Peters. Joseph Cromwell Peters, who is now deceased, never met his two half-sisters and didn’t know anything about them because their mother and his father divorced before his birth. The little book had always fascinated Jean and she would occasionally pick it up and read some of the poetry.

The preface in the book reads:

The sole intention of the authors in writing these poems is to show the Negro’s loyalty to the stars and stripes in the war with Germany and to show the need of unity of all men in the fight for democracy.

Eventually, Jean started to scrutinize their words and she realized she was reading protest, which seemed unusual for teenage girls in 1919 in rural West Virginia. How was it possible to know just after WWI how badly black soldiers were treated?

The fifth poem in the collection, written by Ada Peters, is entitled "The Slacker." It was this poem that inspired Jean to bring her book to the attention of Joel Beeson, a West Virginia University Visual Journalism and New Media Professor when she was invited to attend an event at the Kimball Memorial for an exhibit his students created on African American World War One soldiers. 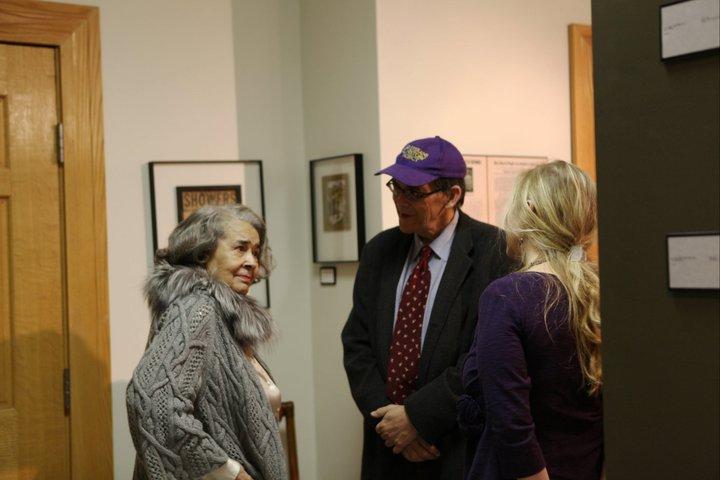 Jean Barnes Peters talks to WVU Professors Dr. Joel Beeson and Dana Coester in 2010 at the opening of the Soldiers of the Coalfields exhibit at the Kimball War Memorial. CREDIT A.J. LAWSON / WVU SCHOOL OF JOURNALISM

While looking at the artifacts, she saw a poster that read "The Colored man is no slacker," which made her think about the poem in her book.

To crush honor beneath his feet

That the light of day should dawn

Upon one, who from duty flees

While on Freedom’s Bleeding Alter,

His Noble Comrades have bled

But he stands idle a slacker

Disgraced before living and dead. 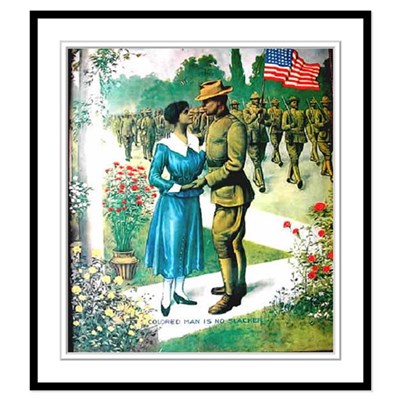 When asked about the poems, Beeson said “These young women who are 17 and 18 were commenting very intelligently on their times...and the things they were saying were protest, they were asking for civil rights and this was back in 1919 before the Internet, before television...” 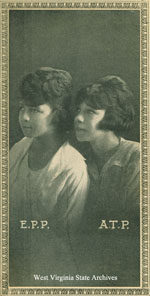 Beeson was so impressed, he and his students developed the interactive website, War Poems that allows viewers to page through the book, read the poetry, learn about its history, and hear  Jean Barnes Peters' story about finding it on a forlorn bookshelf in her house.

Beeson hopes that the new and interactive media will reach young people. “That’s the language and that’s the medium that young people use,” he said. “So, hopefully, this is a site where we can get young people enthusiastic and inspired about these two young women whose voices were kind of left in the past and we’re trying to bring that to life.” (Photo, left: courtesy of the West Virginia Division of Culture and History)

“War Poems”  is a window into the African American experience and perspective in southern West Virginia during World War I. Overcoming the persistent obstacles of the Jim Crow era in addition to gender, age, and geography, the women published this volume as bold commentary on the issues of racism in the context of war.

In the process, these young women also opened a window into their time and reached out across history to tell their story. The War Poems site authors hope, as you peer into the Peters' world, you’ll see it connect to yours. Above all, they want you to know this is an interactive experience. It grows with its users as you share your own creativity to their words. For example, the site allows users to craft their own poems using ideas and concepts from the Peters' work.

About Dr. Joel Beeson and the Kimball/Soldiers of the Coalfield Project

Joel Beeson, associate professor at the P.I. Reed School of Journalism at the University of West Virginia says about the larger project on African Americans in WWI:

I became acquainted with the McDowell County memorial and its board members in 2005 while working on “Fighting on Two Fronts: The Untold Stories of African American WWII Veterans” a documentary film about black soldiers in the segregated military. One of these veterans, Board of Trustees President E. Ray Williams, asked me if I might be able to find “a few photographs of black soldiers in WWI” the next time I was doing research at the National Archives. The walls of the memorial building had been bare since the restoration because most of the original artifacts and documents had perished in the fire of 1991. Two weeks at the Archives and 500 scanned photographs

Later, I assigned students in my visual storytelling class at WVU to create a permanent exhibit at the Memorial. What started out as a class assignment evolved into a community project, now known as the “Kimball War Memorial Project.” 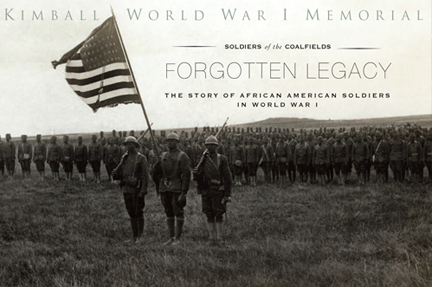 The students researched, designed, sought grant funding and curated a permanent exhibit for the Memorial Building in 2010 entitled “Soldiers of the Coalfields,” which includes an interactive website and Facebook page. The exhibit of images and words tells the story of African American veterans in McDowell County, including migration from the rural South to work in the coal mines, their military service to the nation (including contribution of five generals from five segregated black high schools in the county) and places the local history of McDowell in the larger context of African American experience. The project includes a sensitive exploration of the dimensions of discrimination as well as honoring the successes and accomplishments of black veterans. The students’ work in this experimental class was the subject of a PBS MediaShift story, “Teaching New Forms of Storytelling, From Database Narratives to Quantum Journalism.”

From the outset, “The Kimball Project” (as it has become known) was envisioned to support and collaborate with efforts to preserve the cultural history of black military service, and to promote the Memorial as a national treasure and unique destination for historical tourism that will bring benefits to an economically disadvantaged community. We plan to continue interactive web projects, mobile outreach and innovative wearable technology projects to raise awareness of this vital national historical resource.

I STUMBLED ACROSS THIS SITE BY FOLLOWING A 'READ MORE' HIGHLIGHTED ON A WWI SITE I WAS PURSUING. IT IS VERY INFORMATIVE. BEING 73 YEARS OLD THE INFO MADE ME WONDER HOW MUCH MORE I'M UNAWARE OF ABOUT BLACKS IN THE MILITARY. IT'S AS DISHEARTENING...

I STUMBLED ACROSS THIS SITE BY FOLLOWING A 'READ MORE' HIGHLIGHTED ON A WWI SITE I WAS PURSUING. IT IS VERY INFORMATIVE. BEING 73 YEARS OLD THE INFO MADE ME WONDER HOW MUCH MORE I'M UNAWARE OF ABOUT BLACKS IN THE MILITARY. IT'S AS DISHEARTENING AS ANY CURRENT LIE OF OMISSION WE FIND OUT ABOUT.

THANK YOU FOR YOUR WORK. WHEN MY FORTUNS PERMIT I WILL MAKE A DONATION TO YOUR MUSIMUN

PLEASE FORWARD ANY ADDITIONAL INFO NOT INCLUDED THAT WOULD FURTHER MY KNOWLEDGE..