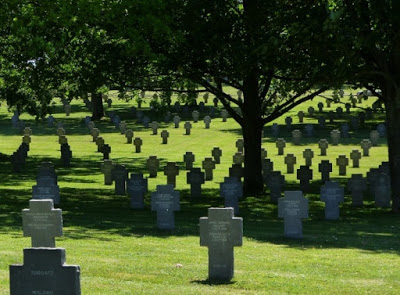 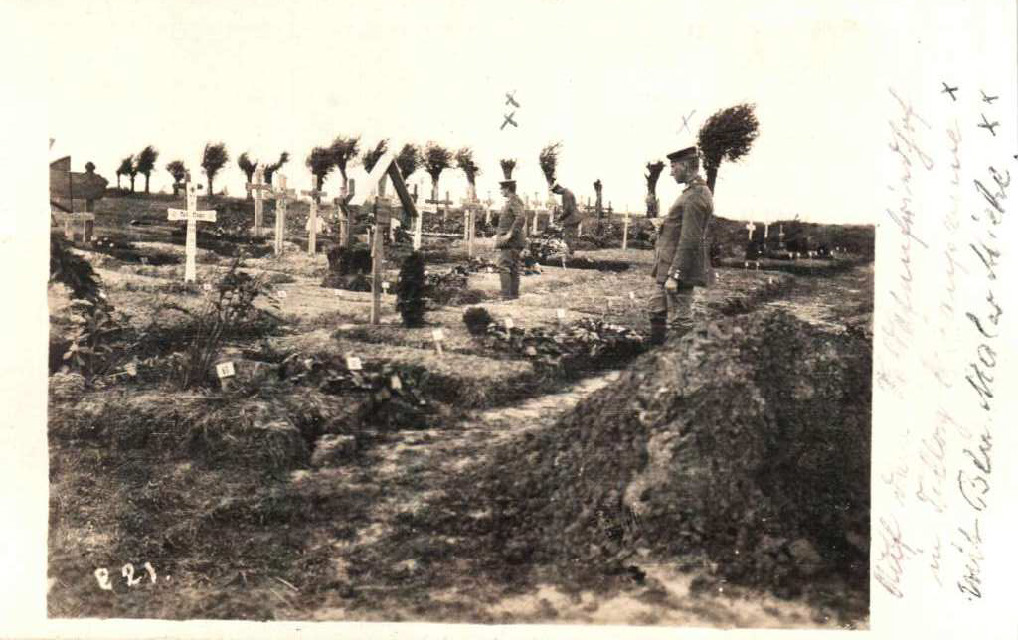 Hammond’s search for the composer’s grave led to the discovery by the German War Graves Commission (the Volksbund Deutsce Kriegsgräberfürsorge) that while Ernst Brockmann had no known grave, a soldier with the same death date and the initials E.B. had been buried outside Verdun.  Exhuming the grave led to the positive identification of the unknown soldier; he was Ernst Brockmann, and in 2016, he was reburied in a ceremony at which Hammond and Redman sang the tune he had composed.

Soon, all too soon (Bald Allzubalde)

Alone in the woods, a flower blooms red

Soon all too soon, I too will be dead.

Flying somewhere is a small piece of lead

Coming to take away all my care

Today or tomorrow, all is the same.

Far down in the valley three spades are digging

A stone-cold grave for a soldier who’s gone.

In the distance of twilight lies a small town

Where a young girl weeps in her lonely room,

Alone in the woods a flower blooms red

Soon all too soon, I too will be dead.†

But what of the song’s lyricist, Josef Rust?  I contacted Patricia Hammond, who said that she had found mention of a Joseph Rust (spelled with a “ph” and not a “f” as on the sheet music) on the German village of Eissen’s website, where he was referred to as a “teacher, writer, and poet” who had lived from 1895 – 1981.  The dates seemed right, and the village of Eissen lies in northern Germany, not far from Paderborn, the area where Brockmann was from and where the 1917 book of war songs was found— but there was no conclusive evidence linking this man to the song. 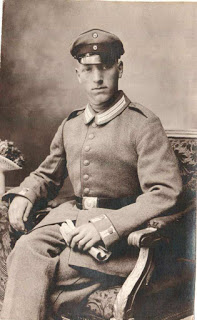 I began my own search and discovered that the website Europeana Transcribe lists a German soldier by the name of Josef Rust and provides 186 images from his photo album, as well as a handwritten copy of his war-time diary.  It was encouraging to find in the diary’s preface the note, “This is a war diary; my poems, insofar as they have been published, are intentionally omitted” – but if the poems had been omitted, so too might be any evidence linking this Josef Rust to the song “Bald Allzubalde.” And yet this man was almost definitely the Joseph Rust that Patricia Hammond had found on the Eissen website: while the names were spelled differently, the photo album of Josef Rust includes a telegram with several mentions of “Eissen,” and a typed timeline of his war service gives the dates of his birth and death: 1895-1981.  And so the outlines of this German soldier-poet began to appear: a studio image of a stern young soldier, as well as a more relaxed photo of a young man leaning against a hedgerow, carrying a small book and pen (perhaps his diary).  But was this the same man who had written “Bald Allzubalde”? 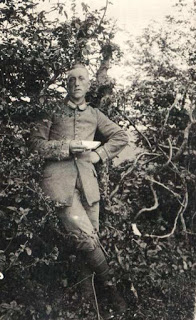 The diary records that on August 8, 1915 after completing three months of training, Rust left Berlin and crossed the Russian border.  His first impression of the war was of mass graves and transports of the wounded. Over the next two months, he and his unit fought the Russian army in what is now Poland and Belarus.  From August 22nd until the 24th, Rust and his unit were caught in a fierce battle near the town of Orla: fired on by both the Russians and their own artillery, Rust records that “bullets whined like hornets, shells exploded, and every second man was a casualty.” Officers fell and group leaders were wounded, while Rust attended to a dying officer from his hometown, transcribing the man’s last words so they could be sent home to his parents.  In the same diary entry, Rust writes, “One year later, I sent to the young recruits of the 2nd Guards Res. Rgt. 6 a keepsake – a poem about the events of 24 August 1915 that had been printed in Garde Feldpost:“Einsam im Wald.”  The title of Rust's poem is the first line of the song “Bald Allzubalde.”

In September of 1915, Rust and his men endured a grueling march from the Eastern Front to the trenches of the Western Front.  Stationed at Cambrai— if any doubt remains that this is the Josef Rust who authored the lyrics—he records in his diary, “In October I wrote, ‘Einsam im Wald’ (‘Lonely in the forest’).††  On April 20, 1916, my well-known colleague wrote a suitable melody, and afterwards it was sung repeatedly. J. Hatzfeld took the song in his collection: ‘Tandaradei,’ see page 143.”  And in pencil, appearing above the words “well-known colleague,” is written E. Brockmann. Here was the lost lyricist.

Echoing the words of the song/poem, Rust’s diary in November of 1915 describes a solitary walk he took in Cambrai. Alone in the city, looking through the weak rays of November sun toward the battlefield, Rust saw rain clouds gathering, a harbinger of the bullets and death his comrades were facing and which he was convinced would soon find him. He thought of his home, his loved ones, and the former days of peace and happiness that had been sacrificed to the bloody war, and he gave himself over to an "All Soul’s mood" of despair.

Rust’s diary preserves an astonishing and frank account of the war. He writes of the Somme in October of 1916, “It's raining. Tomorrow is our third time to the Somme. We sing only songs of dying.” 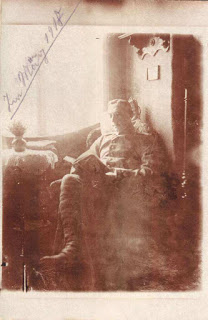 But Josef Rust, unlike his musical collaborator Ernst Brockmann, survived the war.  Seriously wounded in early June of 1918 in Belleau Woods near Chateau Thierry, Rust spent over four months in hospital, returning to military service only to witness Germany’s surrender.  Though he frequently longs for peace in his diary entries, when he learned of his country’s defeat, he writes that he cried bitterly: his unit had endured four years of war; their commander had lost an arm, yet officers were required to surrender their weapons and remove the insignia that denoted their rank. Rust wrote, “I will not forget the day and this shame,” and commented, “The world, if it can free herself from the burden of this war, can be redeemed only with love, but not by force.”

* Patricia Hammond’s CD recording Songs of the Great War is available on her website, as well as on Amazon and iTunes. This post has been reposted with courtesy of Connie Ruzich from the Behind Their Lines blog.

† Translation by Danita C. Zanré. Here is the original German:

†† It appears that the song was sometimes referred to by the poem’s title “Einsam im Walde”: in its 14 September 1934 issue, London’s Wireless World magazine reports the song “Einsam im Walde” was broadcast from Hamburg on Sunday, September 9th, 1934 (page ii).

+++ All photos courtesy of Behind Their Lines