During the last two years of the WWI Centennial, Connie Ruzich and her blog Behind Their Lines, which shares lesser-known poetry of the First World War, have generously teamed up with WWrite with timely posts. Ruzich excels at drawing the past and present together by linking current events with pivotal moments from 1914-1918. Her archival work into the lost poetic voices of WWI has served as an incredible resource, providing discussion and research on international lost voices, poems written by those on the home front, and poetry that has been neglected in modern anthologies. In 2020, Ruzich will go from digital to print as she publishes her anthology, International Poetry of World War I: An Anthology of Lost Voices, with Bloomsbury Academic Press. This week, we have come together once more and WWrite has the pleasure of featuring her important post on "The Peace Christmas." 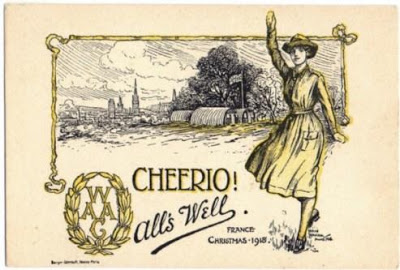 The Peace Christmas: that’s what many called the holiday season of the winter of 1918.  Just weeks earlier, the Armistice ended the world war that had lasted for over four years, involved thirty-two nations, and killed an estimated 16 million.  Yet though the war was over, most of the fighting men and women volunteers had not yet returned home but instead continued to serve overseas.

Carola Oman, daughter of an Oxford military historian, enlisted as a V.A.D. nurse on July 1, 1916.  In December of 1918, she was working at the British rest station in Boulogne, France. 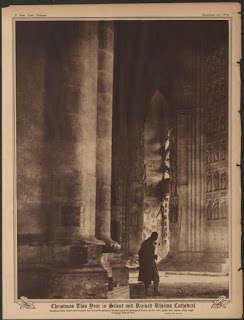 Opposite us across the cobbled square

The trees stand black against the Christmas rain.

The clerk looks up a moment from his pen

In the kit-office, with a vacant stare,

And sees the flags drip grey upon the pain—

Wandering on platforms.  It is noon;

But blue as dusk, and dark as melted snow

The garish lamps will flicker out.  And so

Comes the Peace Christmas to us. Is this all,

To stare and scribble while the shadows fall?

The light burns low. I see the canvas shake

Upon the walls. Now it has passed.  In dark

I rise alone, and my tired footsteps make

Of a far-distant dog—the smell of rank

Forgotten country roads.  By my side now

There moves another traveler.  As we walk

Down to the hurried village a high star

Burns with heroic light, and so we talk

Of recent wonders, for if men speak true

Three days the dawning sky has been inflamed.

There have been angels seen above the hills.

Of her eternal loneliness ashamed

Listens, though not with hope. Now very wide

And unprotected lies the countryside

Deserted, feeling for her frozen heart.

But in the village, as we pass near by,

The inn is overcrowded.  We pass on.

The star is stayed above the inn—or gone.

We only hear a new-born infant cry. 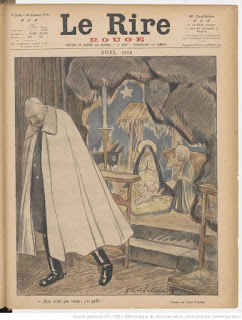 This Christmas scene is grey and bleak. Rain-sodden flags drip upon the pain of widows, fatherless children, refugees, and the myriads of others who must now bear the aftereffects of the war. The pervasive mood is one of desolation: now that peace has returned, is this shadowed world the best that can be hoped for?

As dusk falls, the poem’s narrator leaves the shelter of her canvas tent and wanders alone into the night. She makes her exhausted way through the blackness, hearing the distant sounds of village life until she finds herself in the company of a stranger. They walk together under a star that blazes with “heroic light,” discussing recent rumors of signs and wonders: angels have been seen in the hills.

The crowded French town, besieged by the burdens of war, blurs and recedes until its skies and inns recall another village in a far-off land, where refugees sought shelter, peasants set out in search of the miraculous, and distant foreigners journeyed to find a new king. 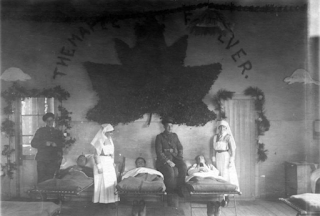 The correspondences between the past and present may hint at a brighter future, but no angel of Bethlehem— nor of Mons—appears with clear reassurance.  Perhaps the strange traveler is an angel; perhaps not.  The inn may shelter a miraculous birth, but the walkers do not stop.  The infant’s cry may be that of a transcendent God who loves beyond reason, or only the wail of another undernourished, impoverished child in a war-torn country.

Four years of brutal war have left the heart of the countryside unprotected and frozen; the mystery is whether the hearts of the men and women who survived can be thawed and healed, can learn again to feel and to believe.

Connie Ruzich is a University Professor of English at Robert Morris University near Pittsburgh, Pennsylvania. She has published on aspects of language, culture, and identity, and has lived and taught in the U.S., Italy, and the United Kingdom. Ruzich was a 2014-2015 Fulbright Scholar at the University of Exeter, where she researched the use of poetry in British centenary commemorations of the First World War. Her blog, Behind Their Lines, shares lesser-known poetry of the First World War, providing discussion and research on international lost voices, poems written by those on the home front, and poetry that has been neglected in modern anthologies.  In 2020,  her anthology, International Poetry of World War I: An Anthology of Lost Voices, will be published by Bloomsbury Academic Press. Her research can also be followed through her twitter feed (@wherrypilgrim).

What a magnificent poem to a newborn peace!

Thanks for reading and responding, Ruth -- Oman is one of my favorite WWI poets!

Connie Ruzich
There are no comments posted here yet