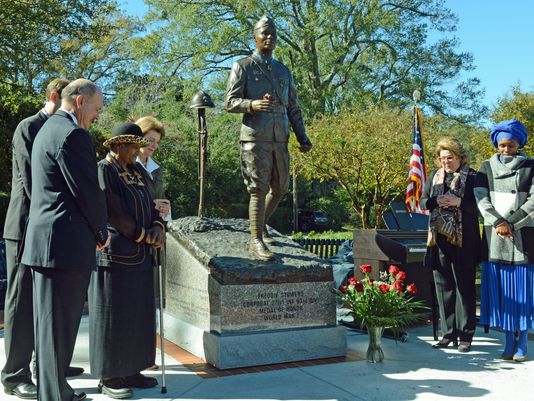 Over the course of my career, I have been fortunate to have spent time interviewing people about their lives and their contributions to historical events. From the living, we also learn about those who died and never got to tell their story. From 2007 to 2010, my students and I interviewed over 60 men and women who served in, contributed to, and/or were personally affected by World War II. A significant number of these interviewees were African American veterans. Their oral histories reflect courage and pride but were often tinged with bitterness and resentment resulting from the way African Americans were treated during that era. After Barack Obama’s election to the presidency, it was fascinating to hear how these veterans’ perspectives on their service had evolved.

A few years later, I was privileged to spend two weeks participating in a seminar at the U.S. Army Command and General Staff College at Fort Leavenworth, Kansas. At their 13-foot bronze monument to the Buffalo Soldiers, dedicated in 1992 by General Colin Powell, I reflected on the African American veterans I had interviewed, and how the complex feelings they had in regards to their service during World War II must have been shared by Buffalo Soldiers who preceded them.

In anticipation of the centennial of World War I, I began researching African Americans who served in the American Expeditionary Forces (AEF) from my community. Most compelling was the story of one soldier whose influential and enduring legacy would have been inconceivable to him. September 28, 2018, marked the centennial of his death.

Freddie Stowers was born in the tiny town of Sandy Springs in upcountry South Carolina in 1896, the same year that Plessy v. Ferguson provided judicial justification for racial segregation. As the grandson of slaves, Stowers’ life in this small southern town would have been strictly circumscribed by the racial customs of the day. He married a young woman named Pearl, with whom he had a child, Minnie, named for one of his sisters. He worked as a farmhand before being drafted into the Army, where he served with the 371st Infantry Regiment of the 93rd Division, one of only two African American divisions. Before sailing to France, he trained at Camp Jackson in Columbia, South Carolina, about two hours away from his hometown. 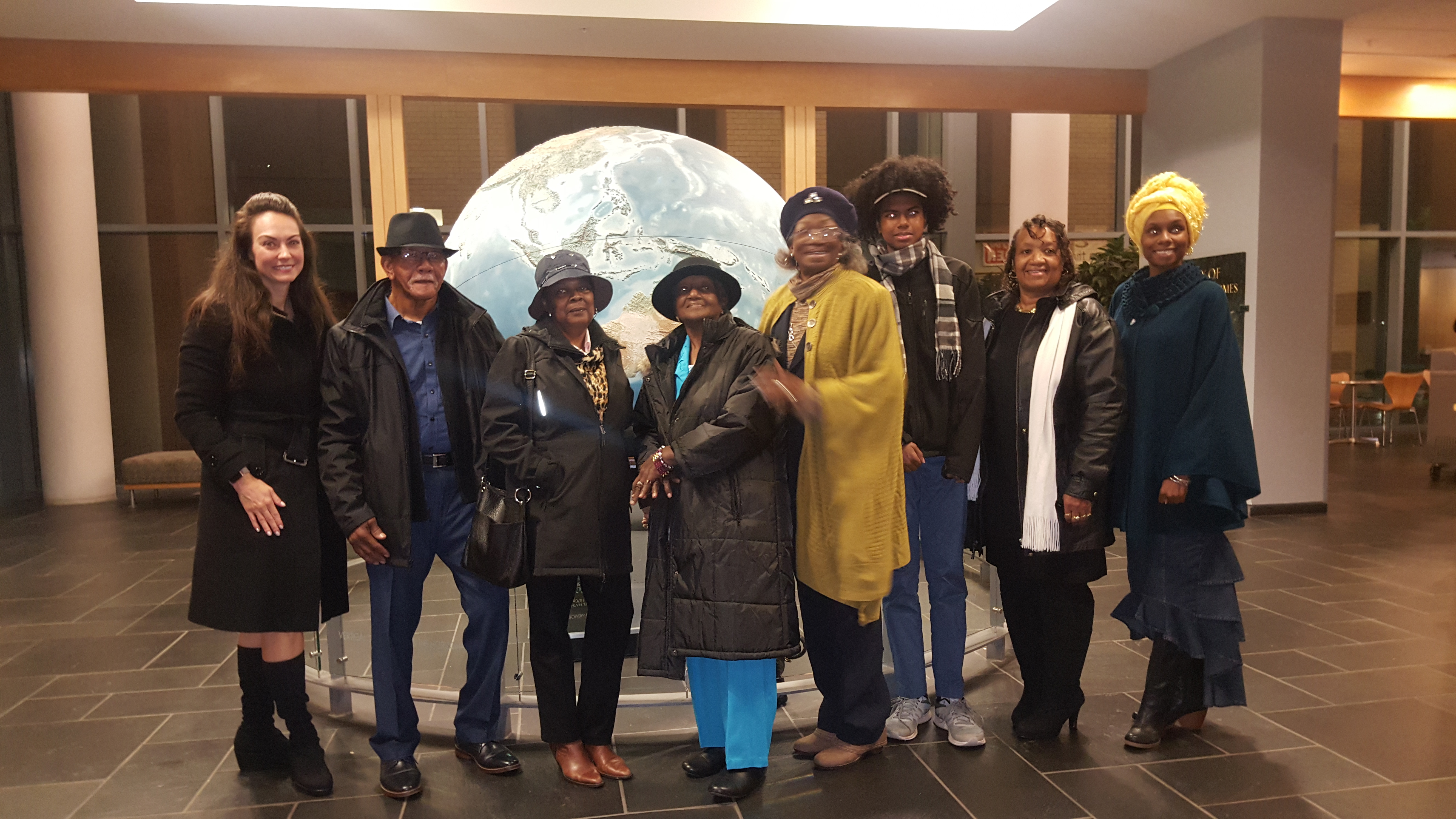 The author photographed with descendants of Freddie Stowers after an event in Greenville, SC that commemorated the centennial of the end of the war. Location: Grenville (SC) County Library Photo Courtesy: Hiram Springle

As a member of the 93rd Division, Stowers served under French command. Only two days after American Expeditionary Forces launched the Meuse-Argonne offensive, Stowers led an attack on Hill 188, which had been fortified by the Germans. As Stowers and his fellow soldiers approached, enemy troops climbed out of their trenches with their hands up in supposed surrender, yet when Stowers and the others drew closer, the German troops opened fire. Stowers pressed onwards to the machine gun nest that posed the greatest threat, and, after those senior to him in rank had gone down, encouraged his men to similarly attack the enemy’s defensive fighting position. After successfully overcoming the first set of trenches, Stowers reorganized the men in his platoon and attacked the second set of trenches. During this attack, Stowers was struck but fought on until struck again. As he collapsed, he continued to encourage his men to forge ahead. They were ultimately successful in driving the Germans from the hill. Stowers died that day, at the age of 22, and is buried in the Meuse-Argonne American Cemetery about 160 miles northeast of Paris. 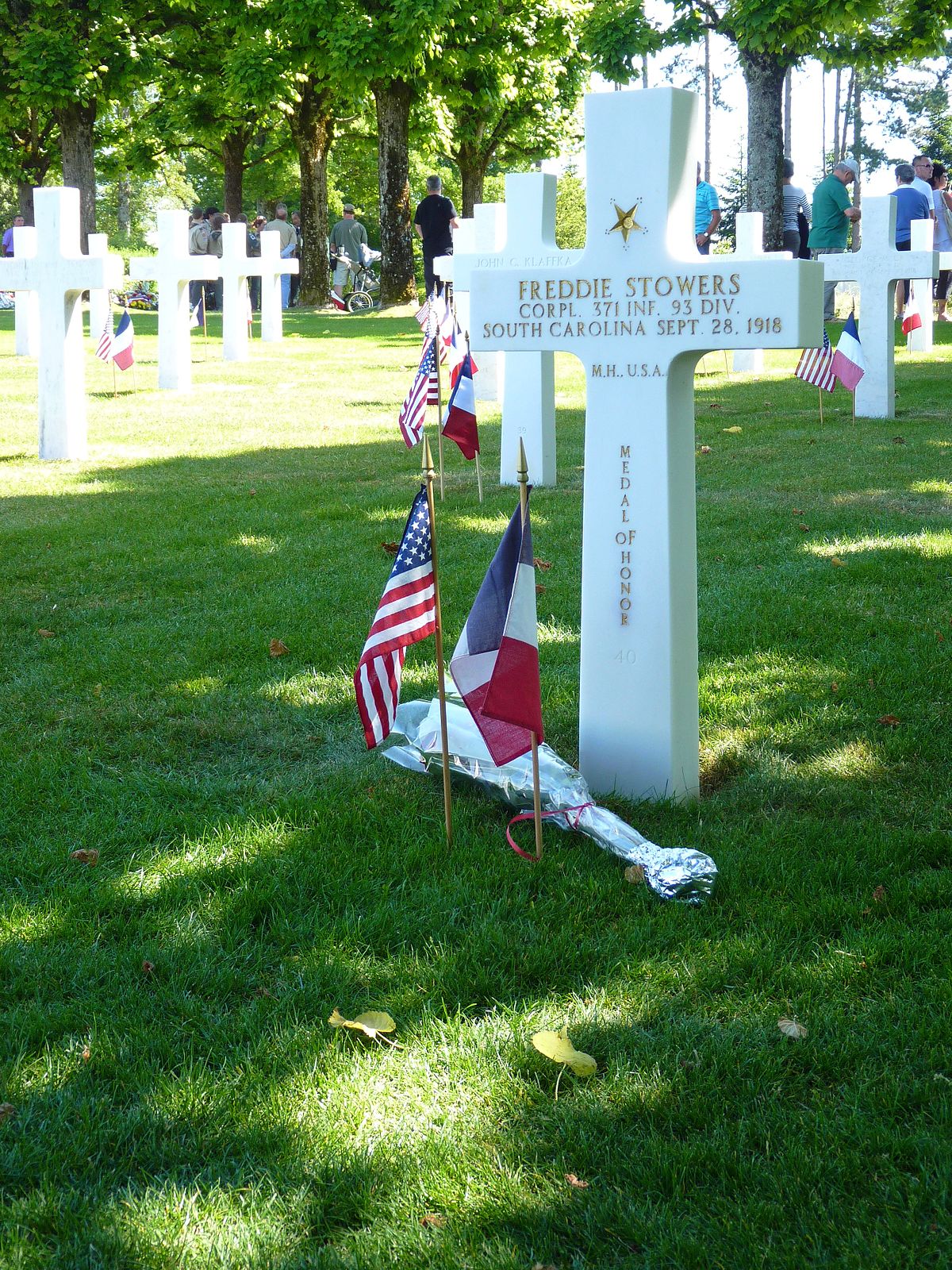 Many African American soldiers served under French command in World War I. Freddie Stowers’ gravesite in the Meuse-Argonne American Cemetery is featured above, fittingly decorated with the flags of the United States and France. Image source: Wikipedia France

While the circumstances of his service and sacrifice are enough to warrant our gratitude and respect, the continued impact of his death in redressing racial inequities in our country has helped transform our nation.

The entire 93rd regiment was awarded France’s Croix de Guerre (War Cross), an esteemed military honor. At the time, deeply-rooted racial prejudice infiltrated nearly all aspects of American society, and the United States government failed to appropriately recognize the efforts of its African American soldiers. Not a single African American soldier received the Medal of Honor in the years or even decades closely following not only World War I, but World War II as well.

During their investigation, the Army located paperwork from World War I recommending Freddie Stowers for a Medal of Honor. A team traveled to France to study the circumstances of his death, and the Army Decorations Board approved the honor.

Seventy-three years after he was killed in action, Freddie Stowers became the first African American recipient of the Medal of Honor for World War I. Stowers’ surviving sisters, Georgina and Mary, stepped forward at the White House ceremony on  April 24, 1991, to accept his award from President George H. W. Bush.

The posthumous awarding of the Medal to Stowers contributed to an official report that decried institutional racism as the root cause for the lack of military honors to African American soldiers in World Wars I and II. Furthermore, subsequent studies suggested that discrimination had impacted not just African American soldiers, but also Jewish Americans, Hispanic Americans, and Japanese Americans.

Presidents Clinton, George W. Bush, and Obama continued the commitment begun by President George H.W. Bush to redress these inequities. Collectively, from 1991 to 2015, these presidents awarded over 50 Medals of Honor, most of them posthumously to male minorities for their service in World Wars I and II, Korea, and Vietnam.

Given the racial climate within which Stowers lived, the lasting and powerful impact of his courageous service on our nation’s treatment of our most lauded men and women in uniform would have been unfathomable to him. When Stowers was a child, President Teddy Roosevelt shocked the nation when he dined with an African American at the White House; 90 years later, the White House hosted a ceremony in his honor.

Note: An earlier version of this piece was published in The Greenville News on September 30, 2018. 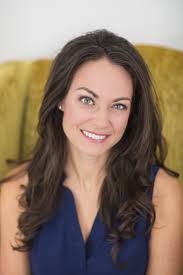 Dr. Courtney Tollison Hartness is Assistant Professor of History at Furman University. Previously, she served as the Founding Historian for the Upcountry History Museum-Furman University and Founding Director of the Furman University Oral History Project. She specializes in modern American History and in Public History. Her current research focuses on World War I. Her forthcoming book, titled “Our Country First”: The Making of a South City During the Progressive Era and World War I, contains more information on Freddie Stowers, other soldiers from Upcountry South Carolina, and the ways the community contributed to and were impacted by World War I.

She has been a Fulbright Scholar (Ukraine), a fellow in Columbia University’s Oral History Research Office, and a Mellon Grant recipient for ASIANetwork’s Faculty Enhancement Program (India). She is a graduate of the U.S. Army Command and General Staff College Military History Instructors Program at Fort Leavenworth and the Riley Institute’s Diversity Leadership Initiative.

She has published two books, curated three museum exhibits, worked on several documentaries, conducted over 100 oral histories, and served as historian for memorials, markers, and sculptures throughout downtown Greenville, including the Major Rudolf Anderson Memorial and the Native American Memorial on Prospect Green.

As a public historian, Tollison maintains an active presence in the arts and humanities across the state. She serves or has served on the boards of Spoleto USA, the S.C. Historical Society, Humanities Council SC, S.C. Sesquicentennial Commission of the Civil War, S.C. Governor’s School for the Arts and Humanities, Carolina Ballet Theatre, the Advisory Board of the Palmetto Trust for Historic Preservation, and Christ Church Episcopal School Alumni Board.

She was interviewed by NPR in 2018 about the Meuse-Argonne offensive. She has also been featured on WYFF-TV, WSPA-TV, SC-ETV, SC-ETV Radio, and has published in The Greenville News, TOWN, Belle, Post and Courier (Charleston), and the Greenville Journal. In addition, she has also been interviewed by National Public Radio (NPR), NTV Russia, The Boston Globe, C-SPAN, USA Today, the History Channel, and ABC News.

Great and talented writer, especially
in the field of history.

This is another strong example of the fine work done by Dr. Tollison. She has an impressive ability to identify important, overlooked historical events and make them come alive in a very appealing way for contemporary audiences.

Ken Johnson
There are no comments posted here yet