How to Remember Your Ancestors’ Names by Drew Pham

How to Remember Your Ancestors’ Names

When WWrite asked veteran and The Wrath-Bearing Tree editor, Drew Pham, to contribute a post, we received a poem that traces Vietnamese heritage by looking at WWI and beyond using experimental techniques with language and style.Pham, who was sent to Afghanistan with the 10th Mountain Division, has published fictional and non-fictional work in Time Magazine, The Daily Beast, Foreign Policy, Columbia Journal, and The Brooklyn Review. Read Pham's innovative poem "How to Remember Your Ancestor's Names" at WWrite this week! 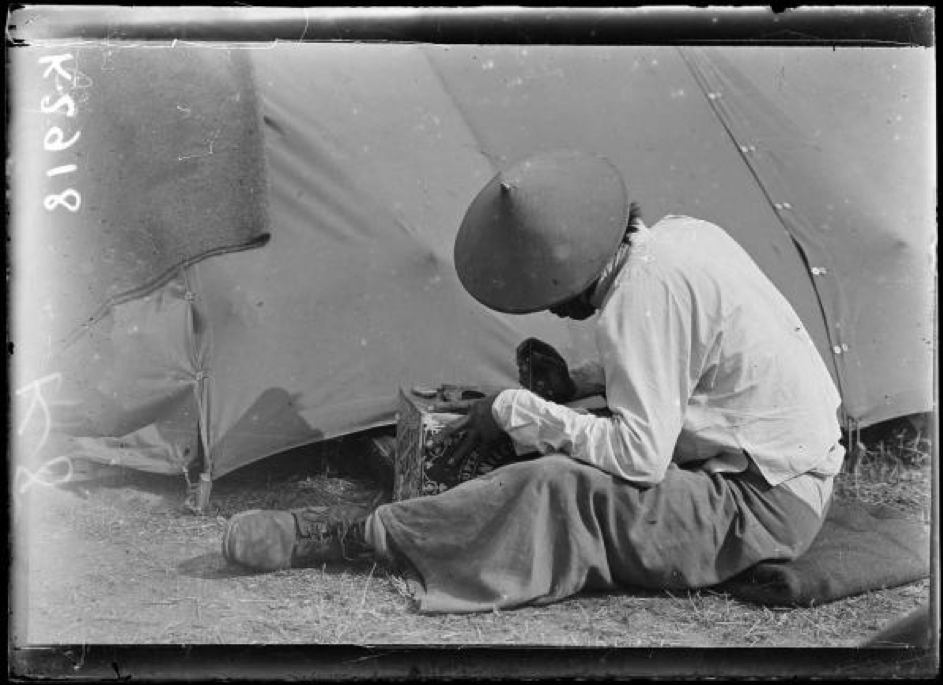 Reference: SPA 54 K 2918. Zeitenlick Camp in Macedonia: a soldier from Indochina (tirailleur indochinois) writing a letter. Date: May 1916. Photo by Georges Dangereux. Image source: The SPCA Archives on Indochina and the Establishment for Communication and Audiovisual Production for la Défense (ECPAD). centennaire.org

How to Remember Your Ancestors' Names

Your mother says her grandmother—

had hair the color of blood spilled,

in her portrait she looks away,

you wish you could read

but her image tells you, 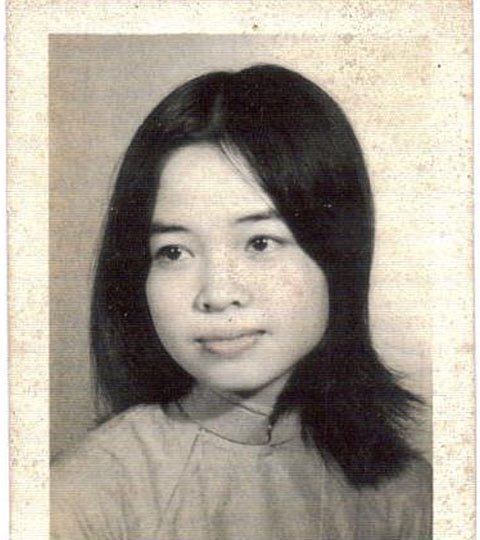 Pham's mother. She worked hard for years as an unskilled laborer in the US until she could afford an education. She now serves as a civilian engineer in the US Army Corps of Engineers. Photo credit: Drew Pham

and what do they say to the little yellow men on the ramparts of verdun / im not a historian but a childhood spent force fed movies about mass murder opens a window for me to imagine they tell these / soon to be / corpses to be brave but / not in a familiar tongue [hãy dũng cảm lên] instead i imagine those pale officers / say be brave / be / brave / be brave but / not the kind it takes to shrug colonial yokes from your shoulders / not enough to make a country from the spirit of an emancipating page / not enough to say no / no they lash these tirailleurs indochinois with their / naked european / tongues / baïonnette au canon / on ne passe pas /  pour la france / a choice between steel / the bosches bullet and blade or the masters firing squad and guillotine / and one in three will die their mothers / names on their lips / the warmth of shrouded suns and flooded plains and star anise / a last mnemonic sensation before drowning in the absence of everything / but the rest / will wait their turns for one war to / metastasize into the next on and on but these little yellow / men will not be remembered / in the films pink / faced poilu kiss / rosaries and pray to saints bones enshrined in / spired crypts  but no one says the prophets shahada / [لا إله إلا الله محمد رسول الله] / nor the heart sutra / [vượt qua, vượt qua, vượt qua bên kia, hoàn toàn vượt qua, tìm thấy giác ngộ] / and if they dont look / to god they stare / into lovers eyes clasped in lockets and wallets / held against / the breast but those so cherished / are too light / eyed and skinned / to look / like bà cố ngoại with her heirloom despair passed / down and down / to mother / to me and she tells me great / grandmother was a pariah for reminding her / kith of the boots / on their necks the thieves / in their coffers the seeds / in their wombs / for that she’d been wed to another pariah / who’d taken up that colonial rifle and the thousands / like him sent ninety fold to dig their graves like veins / through the dysenteric earth / from belgique to suisse / but no one remembers / them the books i read / memorialize their spades but not their uniformed ranks though they died as napoleon said / for a piece of ribbon theyd hoped would make their people free / that invisible notion / liberté égalité fraternité / words to which they were / never entitled / no little yellow man could defend marianne in her phrygian cap / for such an act would sully that pristine ivory / flesh such an act reflects guilty / men’s fear that what theyd done / to us we would revisit on them / when the great war ended those little men took their bits of ribbon home / braided those useless pretty strands into a hangmans rope / strangled an empire thatd been too quick to collect the blood / tax but loath to ever live up to their enlightened / promises / for that like a criminal washing gore from their hands the métropole erased their subjects bodies from the poppy sodden fields fed on indigène meat / but to take up arms against / an oppressor means / to take up his fire and powder and such wrath meets erasure with erasure / so i cannot know if ông cố ngoại had / bled over flanders field because / our self / appointed liberators remembered / the panoptic gaze of that blue white and / red banner / and chased all trace of that crippled empire from collective memory / chased the tens of thousands sent / to the western front / my family burnt every document and photograph and medal / to escape another oppression masquerading as reform / but itd been too late marking my mother / a felon across generations and i suffer no such brand yet i carry great-grandfathers crimes no less / i cant tell you which letters and tonals and syllables make up his name / i can only say / when i was old enough i also took up a rifle in the name of another falling empire / i did not know my inheritance / fighting for a cause / no one believes / yet it rattles through our throats without regard / lying in a hospital bed / mother beside / me she / was afraid she would never have the chance to make amends / told me this hidden detail / five more years before i saw his photograph / alongside bà cố ngoại’s / mom doesnt like to talk / about the war or her parents war or her grandparents war / though it threads us together all / youd think that would close the gulfs and chasms between us but ive long since learned that common pain glues no / one together as much as i want to believe that i would understand the hollows and rises and caverns of their inner lives—i cannot—i only have this story / bits of shrapnel scattered through my family / pieced together but never whole / the explosion that tore its way through our roots detonated so long ago / i cannot tell you whether these bits of steel i still find in my limbs belong / to me / or the histories of my countrymen all so erased

I spell my great-grandfather’s name with

beneath a mountain sun

strange soil are his

on a country that called ours possession

and though I can’t possess the memory

I see him in the farmers passed on patrol

as the meadowlark in spring fields foraging

I wonder if he ever killed a man and

I want to locate that slain soldier

skin made whiter with blood lost though I know

I’m projecting a past premeditation

because the gouverneur général left battalions behind

know a nearer truth exists in between brothers

because I have done the same

to look my mother in the eye

your war’s children have cut

our language from my throat

we have only tongues

so hear instead tone and timbre

but you should know

because my transgressions run so

deep I am alone

is a murderer who hasn’t yet

this isn’t a confession, dear

of the oily fog

from a stick of joss

where i write your memory

when we are alone

and when our names are 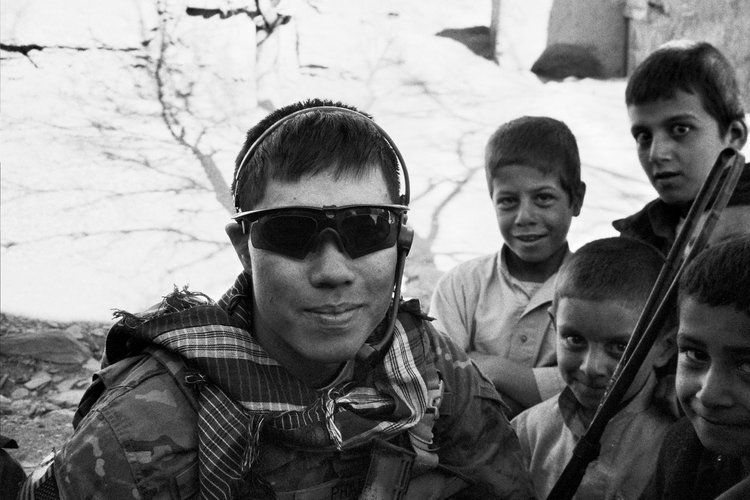 The author, Drew Pham, poses for a photograph with village children in Wardak, Afghanistan. Courtesy of Drew Pham. Image published in thewarhorse.org 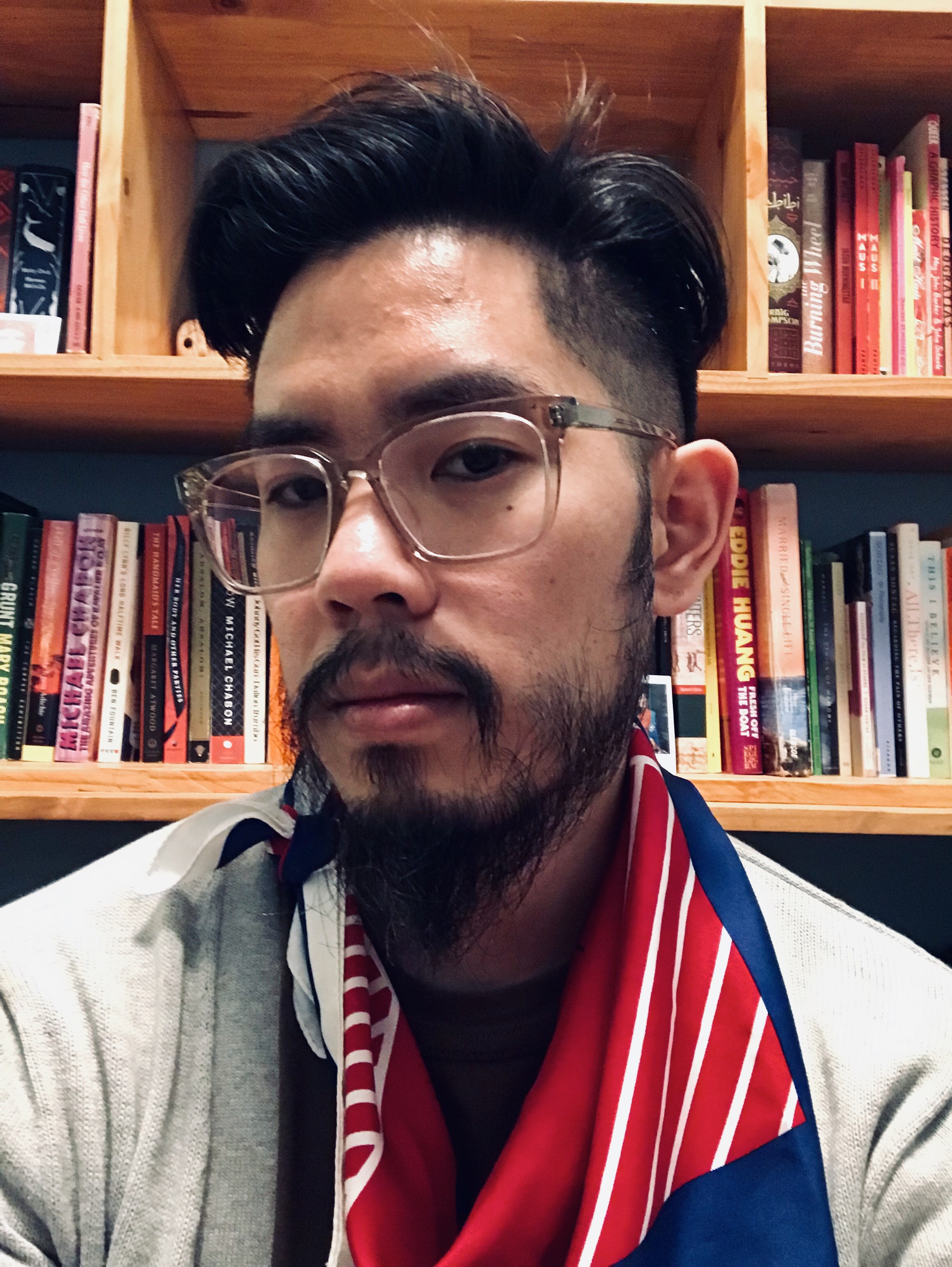 Drew Pham is a Queer writer of Vietnamese heritage and son of war refugees. Drew is an adjunct English lecturer at CUNY Brooklyn College, and an Army Veteran who was deployed to Afghanistan with the 10th Mountain Division. Drew has published in Time Magazine, Foreign Policy,  Blunderbuss Magazine, The War Horse, Columbia Journal, The Daily Beast, and The Brooklyn Review. They serve as an editor of The Wrath-Bearing Tree, an online literary journal focused on themes of societal violence. They live with their partner and two cats in Brooklyn, New York. Follow Drew's Twitter feed at @Drewspeak