Immediately after the armistice, American and British troops moved into Germany as an occupying army. Their purpose was to ensure that the German army did not attempt any further aggression, and to bring order to the country after their leaders had fled. 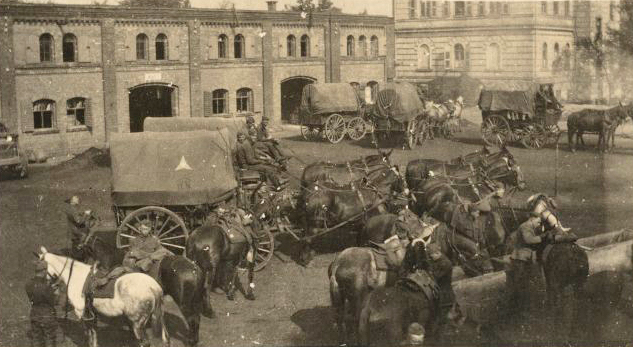 For a long time before the armistice and for months thereafter, life for German citizens and their animals was still very difficult. Germany had for many years (even well before the war) been dependent on imports for food and materials, and their defeat was in large part brought about by a British naval blockade which prevented the import of food and fuel. 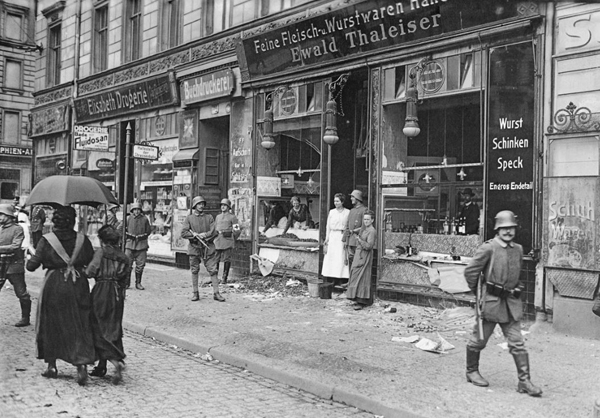 German soldiers guard a delicatessen after it was looted in 1918 prior to the armistice. Imperial War Museum photo.After the armistice the Allies maintained the blockade as a deterrent to further uprising and a means to get German leadership to sign not just a cease-fire, but an actual peace treaty. Supplies continued to be short until the blockade was lifted after the peace treaty was signed in June 1919. German animals were fed sawdust because forage was unavailable, and many starved to death.

With German citizens starving and revolts and uprisings happening in multiple cities, the occupying Allied troops were not idle. But they found time to relax, and some of their activities revolved around horses.

After the peace accord had been signed (the Treaty of Versailles, June 28, 1919), there was less reason to continue to occupy Germany, and the return of U.S. soldiers to their homes accelerated. But just as it had taken months to get soldiers to Europe, it took as long or longer to get them all home. Some of that time also was filled with horse events.

Most of the occupying troops were in Germany by mid-December 1918 with a full complement of animals, though many animals were not in the best shape. 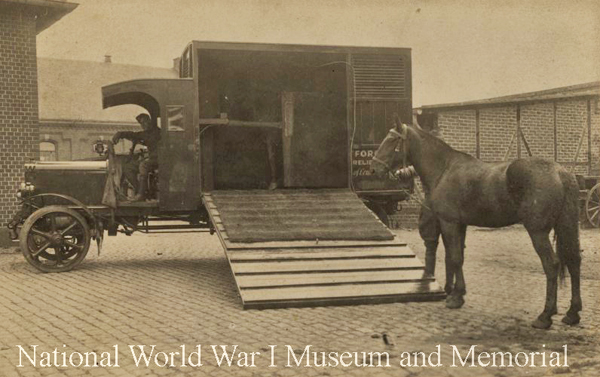 A motorized horse ambulance at Coblenz, Germany, 1919.When the Third Army moved to the Rhine to begin the occupation, locations were secured for veterinary hospitals at Coblenz on the Rhine River in northern Germany and at Treves, just across the border from Luxembourg in western Germany. Personnel to man them were rapidly pushed forward. Stables of knock-down type for 10,000 animals were held in readiness at Verdun for shipment to the Third Army if required. 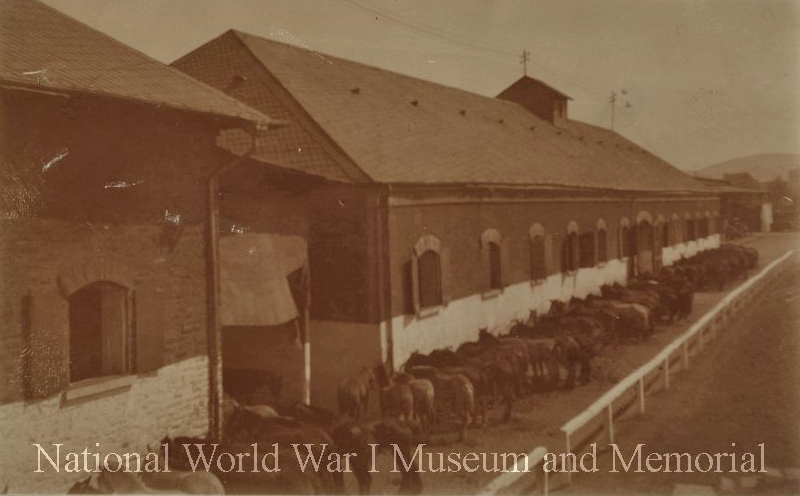 One of the Third Army veterinary hospitals in Germany.

After the first frantic month with its rapid troop movements and confusion over shifts from battle-ready troops to peace keepers, horses and mules could get the care they needed.1 At the same time. excess animals were already overflowing from both veterinary hospitals and remount depots in France.

But ironically, shipments of more animals were also being received from the U.S.

Most of these had been in transit when the armistice was declared. As the Operation Report of the Remount Service During World War 1, A.E.F. states, “high-grade animals were beginning to arrive in increasing numbers at the Base Depots from the States and as fast as transportation became available they were shipped to the various Advance Remount Depots where shoeing was completed and animals fit for immediate service were selected and sent forward.

“It might be here remarked that the quality of the horses and mules that were being received at this time from the States was a matter of great satisfaction to all officers and men in the A.E.F. who were interested in animal transportation, and, after having struggled with war-worn animals that had apparently been treated at least once for mange and other ailments, it was most refreshing to again associate with beautiful, high-spirited animals, strong and healthy, then arriving from the States.”2

A U.S. supply train on review, February 1919.The advancing army was looking for facilities to house its horses, and a short way into Germany, just across the border from Luxembourg, they found at Treves a site to meet the dreams of any horseman. The Germans had had a large cavalry facility there, with a huge indoor riding hall, stabling for over 840 horses, and even a supply of peat moss for bedding. The former German Kasernement Jager Cavalry Regiment No. 7 facility surpassed any stateside post existing at that time with the possible exception of Ft. Riley itself. 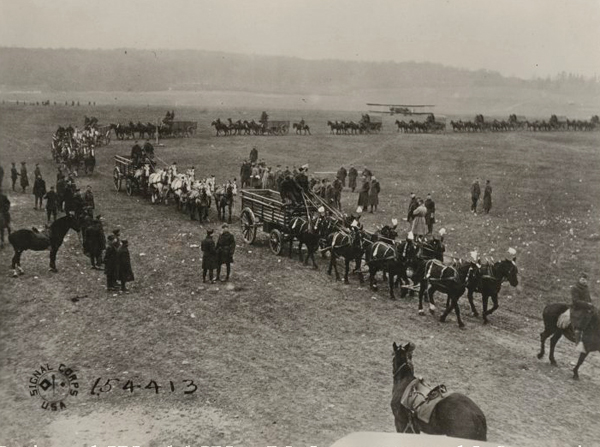 Teams compete at a horse show in Germany, 1919.

Remount Squadrons No. 311 and 322 set up housekeeping immediately. There were 14 brick stables, forming a square with a drill field that was equipped with jumps. Well over 800 spacious standing stalls measured 5.5 feet wide and were separated by iron pipe kick bars suspended by chains from the ceiling. 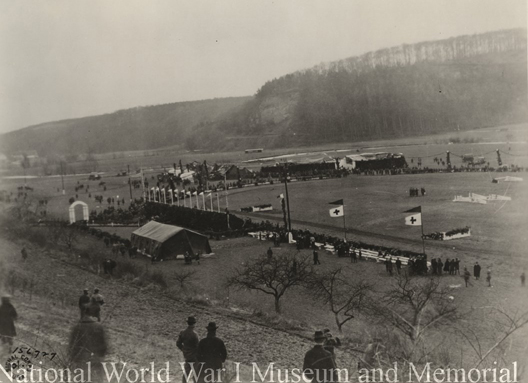 The showgrounds at Coblenz, April 1919.The floors and mangers were of concrete, over which the peat moss bedding was spread. There was even a drainage system whereby all the urine drained into a central tank so that it could be pumped out and then sprinkled over the fields as fertilizer. Ventilation was good, with 2 foot vents every twenty feet.3

The indoor riding hall measured 250’ x 60.’ It was divided into two working spaces with a wall across the center that had a six-foot passage on either side. The flooring was a base of compacted crushed rock covered by three feet of peat moss!4 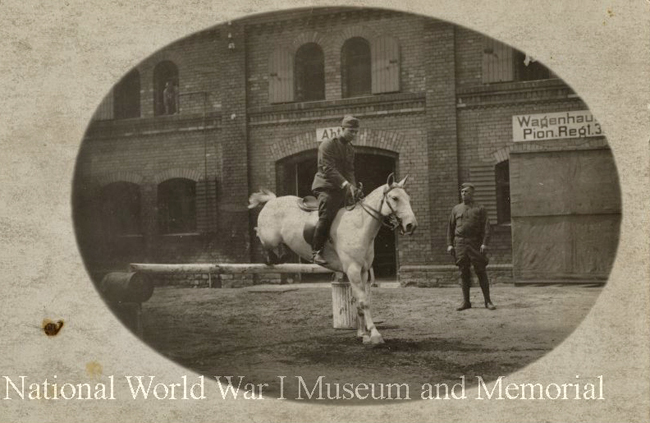 Competing at a horse show in 1919. The dream was short lived, however: by the following June, the decision had been made to consolidate all remount activities at two depots closer to Koblenz, at Kripp and Wengerohr, and Treves was abandoned.

In the meantime, other depots were organized, though with smaller capacities. The depot at Koblenz-Lutzel, housing 500 animals, also became the site of the Equitation School for the Third Army (the U.S. occupying forces). Over 500 horses were in residence, including the school horses. 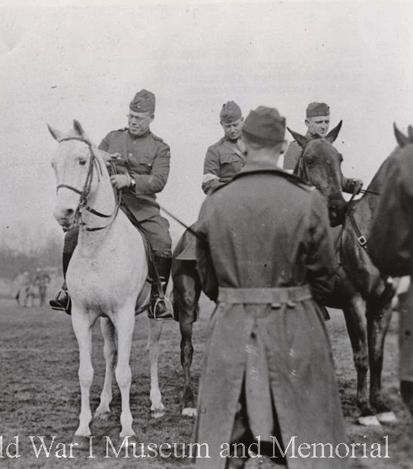 Col. Garrett, the Chief Signal Officer of the 42nd Rainbow Division, with his horse "Babs" at a horse show, 1919.By the spring of 1919, everyone was ready for some fun. Horse shows were organized at the Division level, all accounted to be great successes. They led up to a show for the entire Third Army at Coblenz.

“The Horse Show at Coblenz in the Third Army was one of the best ever held in the United States Army. From April 23rd to April 27th, 1919, every variety of animal and animal transportation was shown. There were a great many other events in the carnival, but the strides made by the troops of the Third Army in caring for their animals and animal equipment was amazing.”5 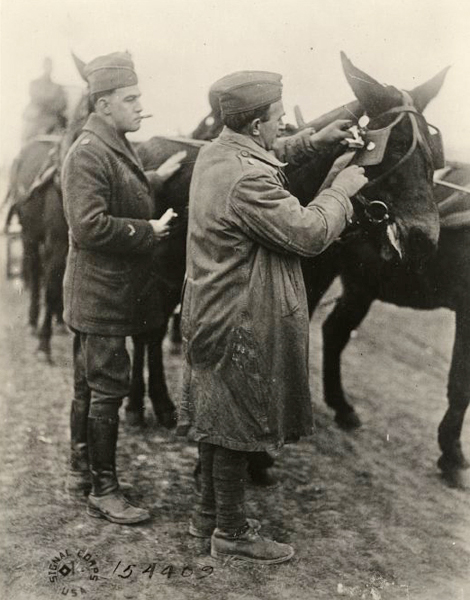 After the peace accord was signed at Versailles both animals and men were disbursed rapidly. Many of the horses and mules went to the local populace, to people who understood how to care for them and were happy to get healthy stock to replace the animals they had lost to starvation during the war.

The U.S. cavalrymen and officers who chose to remain in the army after the war went home to what became known as the golden age of the U.S. Cavalry, the time between the two world wars, to a time when those reflecting on life at the cavalry headquarters at Ft. Riley, Kansas coined the expression “living the life of Riley” - a life where little could be improved upon.

With its expansive and varied terrain, horse-centric culture, polo games, fox hunts, cross-country rides, horse shows, and excellent education in all things horse, Ft. Riley was everything a horseman could want.

Fortunately for the animals, the mounted cavalry never fought another war. By the time the U.S. entered World War 2, the cavalry had become mechanized.

Never again would hundreds of thousands of American horses and mules go to war. 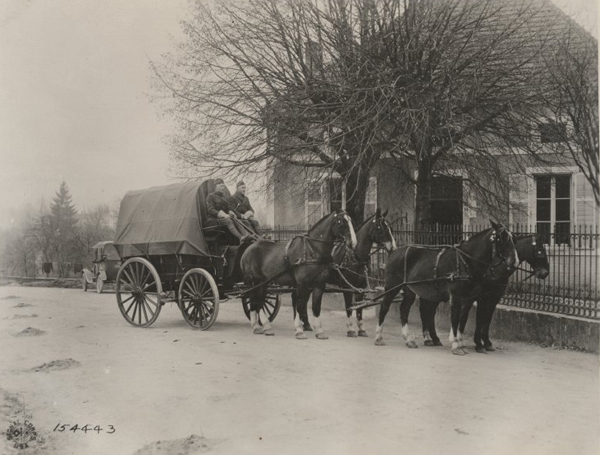