Where They Came From

In both the U.S. and Great Britain, horses were still seen in city streets in 1914, but they had begun to be replaced by motorized vehicles, including passenger busses and cars. In Great Britain in 1911, slightly fewer than 50% of horses lived on farms and only 35% of the 2,600,600 working horses were used for farming.1

The situation in the U.S. was somewhat different, with a total horse population estimated at some 30 million, of which eight million were broken and trained, and the majority of animals lived and worked on farms across the country but with the largest numbers concentrated in the mid-western agricultural belt.

British war plans for obtaining horses at the outbreak of the war had been based on a system of annual payments to horse owners who had agreed to maintain horses fit for military service, that could be provided within days and at a set price if needed. The call-up of these animals was referred to as “impressment,” and it worked as planned – except for the fact that no plans had ever foreseen the scale of the war that unfolded in 1914. Within weeks after the war started, all the horses that were available in England and Ireland for impressment had been turned over to the army – and everyone could see that far more were going to be needed very soon.

The demand for army horses had never been a significant part of the overall horse industry in Great Britain, and if there was a large and sudden increase in army needs, the domestic market could not support it. At least once before, during the Boer War (1899 – 1902), the British had supplemented their domestic supply with overseas purchases, largely from America. This is what led to the nearly-immediate purchase of American animals, purchases which eventually reached the hundreds of thousands. 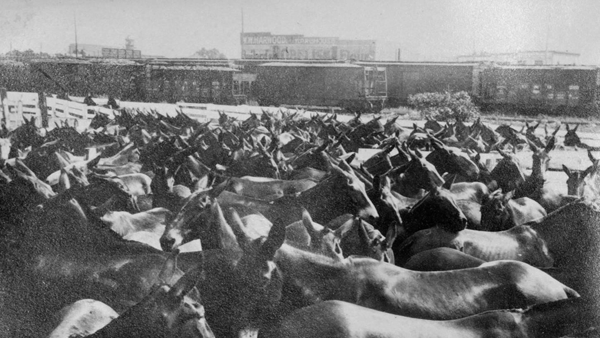 Unloading mules from the train into pens at Newport News.

France also made large purchases in the U.S. The Danville, Kentucky Advocate Messenger reported on January 22, 1915 that "The French government has decided to mount its cavalry on horses from the Blue Grass exclusively, it was revealed when R.F. Carman, one of the best-known turfmen in the country, left for Lexington and Louisville, Ky., with an order in his pocket for the purchase of 60,000 remounts for the French government. This is but the initial order, and Carman states that he is going to buy all the horses he can get hold of."2

There are no records available on how many horses Carman was able to buy, but 60,000 would have been a very large number if he wanted Thoroughbreds, a breed mainly used for racing. The annual foal crop in Kentucky hovered around 10,000 per year even many years later, and finding 60,000 horses of appropriate age and training status in 1915 would have been doubtful.

Just as in England, military needs were not a big driver for horse and mule production in the huge horse market in the United States. The dollars that the British and U.S. Remount services paid were, however, certainly welcome!

In 1914, horses and mules were still traded as a commodity all over the United States, but the largest markets were in the mid-west and to some extent in the south, where agriculture still depended on horse and mule power to pull farm equipment in the fields. Early in the war a vast web of suppliers soon developed, driven by the lure of selling to the British army purchasers.

The Midwest, bread basket of the country and home to millions of acres under cultivation, became the supply hub for horses and mules. Lathrop, Missouri became the center for British purchases because it was the headquarters of Guyton and Harrington, the company that had the exclusive contract to supply British purchasing needs. It had a network of sub-contractors in Kansas, South Dakota, Minnesota, Iowa, Oklahoma, Texas, Illinois, Indiana, Michigan, Kentucky, Tennessee, Louisiana, Alabama, Georgia, North Carolina, Maryland, Ohio, Pennsylvania, and New York. The animals that came from west of Missouri generally shipped through Lathrop, while those that originated further east were shipped through a network of depots to the embarkation points on the east coast.

The far western states were somewhat represented but could not supply the sheer numbers of animals that the Midwest could. Also, the west did not typically supply draft animals, and the light draft horse and draft mule were what was wanted. Still, the supply network went as far as Montana, Idaho, Utah, Wyoming, and Colorado. These animals had very long train rides to get to the depot in Lathrop, and even further to get to the east coast.3